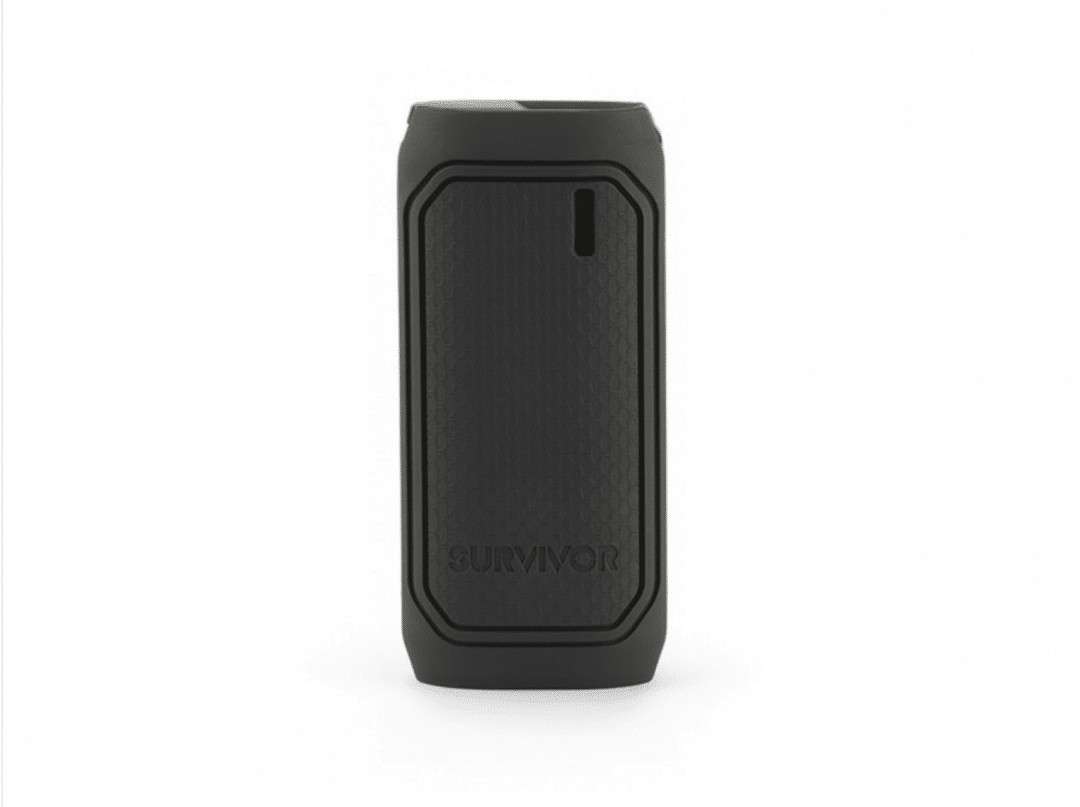 Despite increases in technology, it seems that battery technology has lagged behind.  Our smartphones are with us day and night, at work, on our camping trips and unfortunately in the bathroom.  Be honest, you may not want to admit it, but most of us use that free time to surf the web, update facebook, twitter, etc.  Whether you use your smart phone/device for calls, messages, internet searches, social media, camera/video, games or for a variety of apps, you will likely notice that there tends to be more day than the battery can support.  Over the past two years, my sons and I have become very involved in the cub scouts. Roughly once per month, we will go on a weekend camping trip, free of tech.  The leaders do carry phones for emergencies and for memories.  It is for this reason, that I carry battery power banks.  Primitive camping is not for the faint of heart because the environment can be rough on people and technology.  Luckily, companies like Griffin provide battery packs that can survive the wrath of Mother Nature. 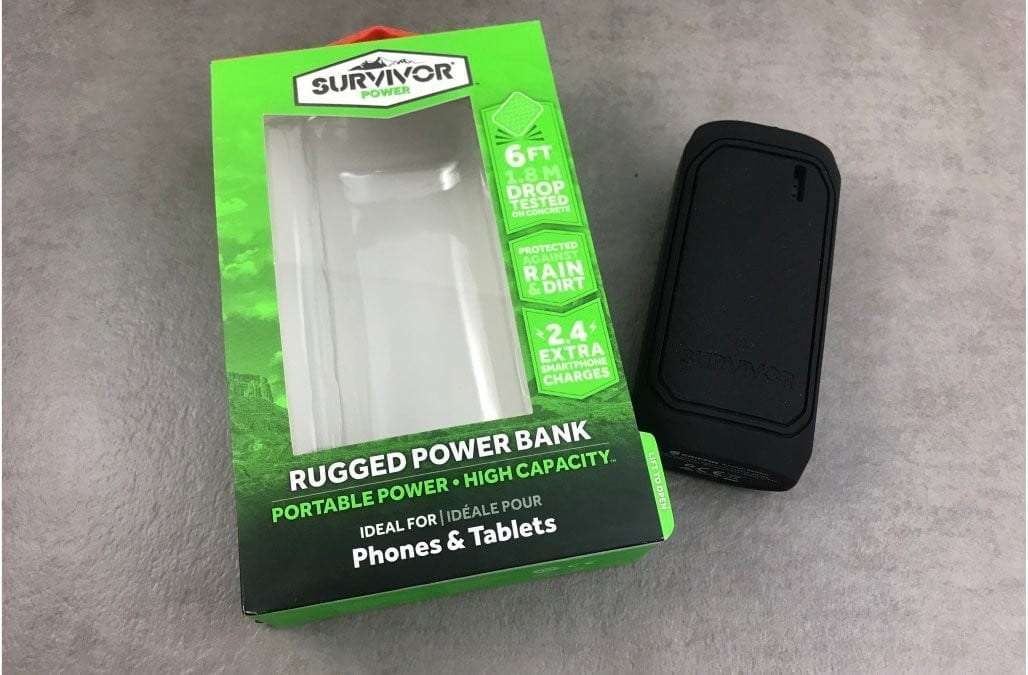 The product arrives in a very appealing retail package.  The front of the packaging has a clear window, fully displaying the battery pack.  The surrounding green color starts as a light green at the top and changes to a dark green at the bottom.  I really think that Griffin did a great job with the gradient coloring.  You will notice a few major features of the device, military standard 6 foot/1.8 meter drop tested upon concrete, Protected against rain and dirt (IP66), 2.4 extra smartphone charges.  Turning the package counterclockwise, the packaging details the charging capabilities: 2.4 charges for smartphones, ~18 charges for smart watches, ~85% charge for most tablets.  It further details the 10W 5V/2.1A output, 5V/2A input, and the packaging contents: the battery, and the 12″ micro-USB to USB-A charging cable.  It should be compatible with anything that charges via USB.  Rotating the packaging another 90 degrees counterclockwise, you will notice the back details the LED charge indicator, the weatherproof shell, and the 6000 mAh capacity.  The top of the case is orange colored and provides a very nice visual contrast to the green case.

Lift the magnetic front flap upwards and the battery is easily removed from the clear formed blister pack.  You will immediately notice the rugged, heavy feel to the battery.  The grip is rubberized and there is no obvious opening to the environment.  Along the top right you will notice a bank of 4 LED and along the top, you will notice a rubber flap that is easily lifted upwards.  Lifting up on the flap, you will find the circular power button, the USB-A output port, and the micro-USB input port.  The flap is easily closed and does provide a good water resistant seal.  The power button has a diagram on the outer part of the flap to allow you to check the LED power remaining.  Out of the box, there were only 2 LED illuminated, suggesting 50% power available.  There is no instruction manual in the case, but you will find a warranty card and a card asking for a review of Griffin products. 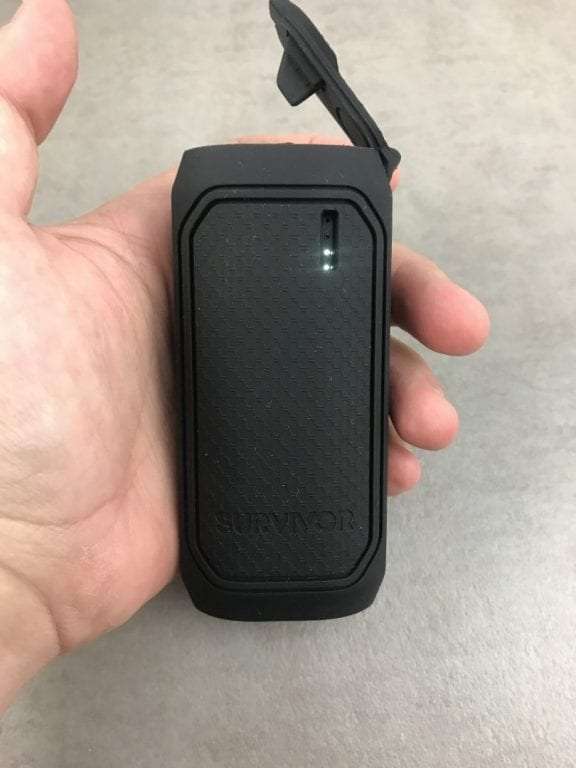 The battery measures 4 1/8 inches tall by 1 7/8 inches wide by 1 1/4 inches thick and weighs a reasonable 6.9 ounces.  The battery capacity is listed at 6000 mAh and should charge at a max output of 2.1A output.  Prior to charging any of my devices, I wanted to charge the battery bank to the maximum.  Using a DROK USB tester, I placed the battery on charge and noted 5.20V/1.75 USB-A input.  Once fully charged (just at 4 hours), I decided to charge my iPhone 7 plus.  Starting at 60% power, I was able to get to 72% in 10 minutes.  Charging at roughly 1% per minute, I was able to charge my phone fully in just under 40 minutes.  Pressing the charge button, there were 2 LED remaining.  The max power output that I was able to observe was 4.92V at 1.31A output (DROK USB tester).  I then repeated the test using my iPad Air 2 and I was able to obtain 4.88V at 2.05A output.  It is important to remember that the current is on demand and will be called by the device.

Despite the benefits of the device, there are also a few limitations to this device.  I prefer to carry 10,000 mAh battery packs, as that level is often sufficient enough to fully charge a tablet.  You can assume roughly 80% battery efficiency from most power banks, as this tends to be the industry standard.  If we assume 80% efficiency of a 6000 mAh battery, we are left with 4800 mAh of available charge.   The iPhone 7 has an internal battery of 1960 mAh, the iPhone 7 plus has a 2900 mAh battery and the iPad Air 2 has a 7340 mAh battery.  At 4800 mAh of available power, I cannot charge my iPhone 7 plus twice.  For the weight of the device, I would rather have a slightly larger power capacity, at the cost of a few more ounces.  A 10,000 mAh battery will give me 8000 mAh of charge, which should charge most modern tablets once and a plus sized phone twice.  The IP66 weatherproof shell is amazing and does provide a really nice grip.  I wish that there was a ring or hook along the border of the battery bank, to attach this to the outside of a bag or pack. Or perhaps there could be a drawstring bag to carry the device and the included charging cable.

The battery pack may be a really good option for a day trip or even for an over-the-weekend trip if you do not expect to use your phone regularly.  The product fulfills all of the advertised promises and is truly rugged and worthy of the “Survivor” moniker.  I would rate the product at 5/5 stars.
BUY FROM AMAZON