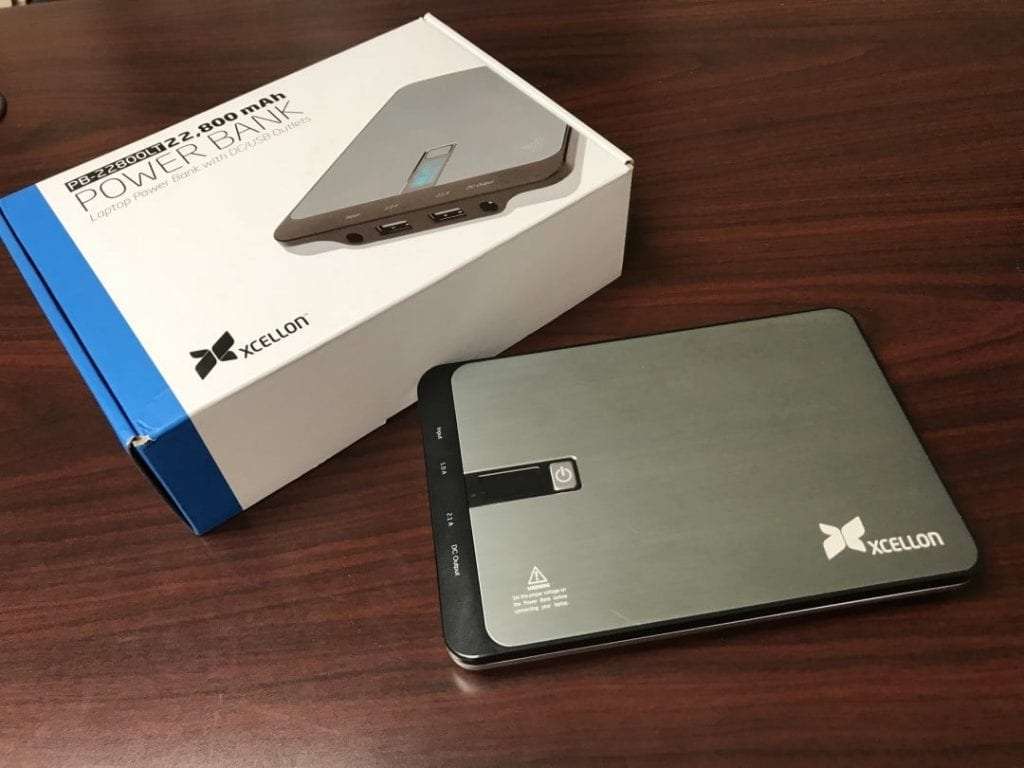 Good for some charging jobs, but not for all.

There is nothing worse than getting close to the end of your day and finding that your phone has precious little battery life left and you still have tasks to finish with it. Even as I write this, I see that I only have 18% battery life left on my phone for the rest of the evening. Now, with this issue, I will probably just plug it into a portable power bank so that I can continue on with my nightly activities around the house. As nice as they power banks are, they typically aren’t powerful enough to charge more than a mobile phone. Even some tablets require something with a little more oomph. This 22800mAh Laptop Power Bank from Xcellon is a sleek, sturdy battery for more hefty charging jobs.

As the name would suggest, it’s a battery with 22,800 mAh of power. This is enough power to charge my iPhone 7 almost 12 full times. The power bank is designed to be able to charge laptops along with USB devices. There are four ports available – the DC input, 1A USB-A, 2.1A USB-A, and a DC output (barrel connector). It can charge up to three devices at one time and has a very readable LCD display that shows battery level and the type of voltage (9, 12, 16, 19, and 20). The power bank comes with 10 charging tips for the charging end of the DC cable so that you can connect your favorite laptop to it.

As a power bank, the Xcellon 22,800 does a pretty good job. I charged my phone on it several times as well as various other USB devices. I didn’t have any problems and had a 10% battery gain after 15 minutes of charging. This is actually less than 1% per minute, which is less than what I normally get from my other power banks. Even though the charge may have been a bit slower than normal, my phone charged safely and I didn’t recognize any overheating problems or any other issues.

Unfortunately, I did have a problem when it came to charging a laptop. My laptop of choice is a 2016 MacBook Pro and it uses a USB-C port for charging and not a barrel connector. The specs on the website state that the battery can be used with Apple MacBook laptops with an adapter plug, which is sold separately. With that in mind, I decided to try alternate methods of charging with the Xcellon. I decided to try using a USB-C to USB-A cable to connect to my MacBook Pro.

While the connection was made, my battery did not charge. Basically, the MacBook Pro recognized it as a power adapter and not a charger. This meant that the computer started using the power bank instead of the internal battery while it was connected. Even though the battery wasn’t recharged, this type of power option can still be useful during an emergency. It’s enough to hold your battery as its current level, but not charge it.

I tried this method of charging with my 13-inch MacBook Pro (61W), a 15-inch MacBook Pro (87W), and an HP Spectre Laptop (45W). All three computers utilize USB-C to charge and all three could not charge using the USB 2.1A port on the Xcellon power bank. I believe this is because the USB port does not push out enough wattage to charge the computers’ batteries. The DC output port surely does, but since I did not have the proper connector for these machines, I could not test it. I was able to test the power bank’s laptop charging capabilities with a Lenovo ThinkPad netbook though and it did successfully charge the battery.

I really like the concept of this battery and love the look of it, but since many modern laptops and tablets are starting to shift over to USB-C for charging, I feel as though Xcellon missed the mark by not including USB-C as a port, or at the very least, including the right adapter for those users. As it stands, this power bank is great for some PC laptop users, but it certainly isn’t an end-all-be-all for every occasion. I can recommend it as a suitable large power bank
BUY FROM AMAZON