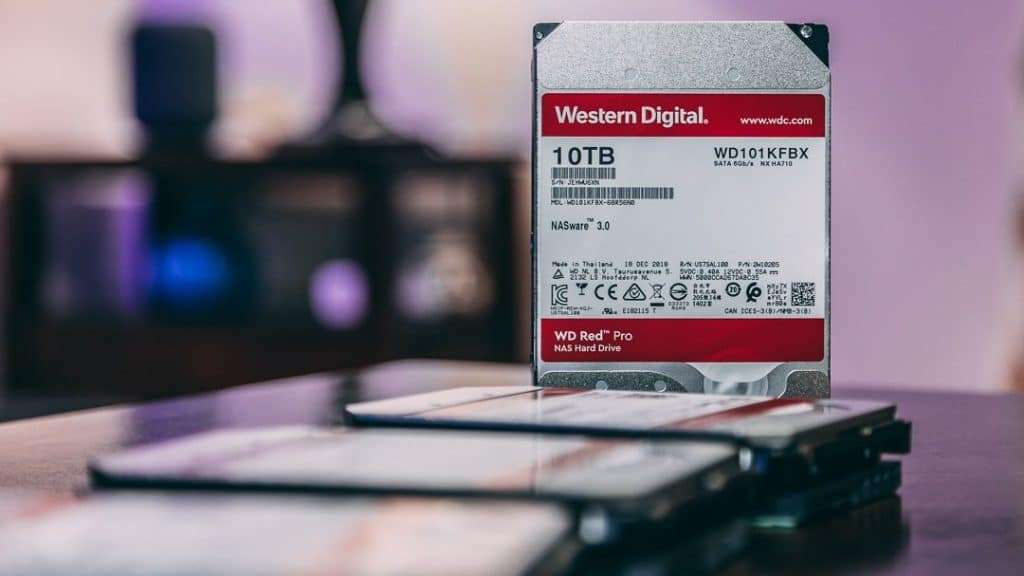 About 8 years ago, I was introduced to the world of network attached storage (NAS) devices. I found out how useful they can be for personal and professional storage and discovered how easy it can be to start one up — even for beginners. At the heart of any NAS device is its storage. Because NAS devices are unique in their function, it can be difficult to determine which type of hard drive you should place into your chosen chassis. This review will hopefully shed a little light into the world of hard drive types as well as a great recommendation for pro-level users.

While some NAS devices work with 2.5” hard drives, this review will focus on the NAS devices that work with 3.5” drives. For years, my personal preference has been Western Digital (WD), but I’ve also work with and had some success with Seagate drives. But, when it comes to considering what will work best for your purposes, there are many factors to consider — capacity, speed, and reliability all come into play.

Personally, I was shocked to learn that there were so many different variable to chose from when it came to a hard drive. The feature that stuck out to me the most was the RPM class. RPM stands for revolutions per minute and it refers to the speed at which the platters on a mechanical drive rotate. When platters spin faster, the performance of the HDD increases. There are two main RPM classes to choose from when selecting a HDD — 5400RPM and 7200RPM. While the 7200RPM is a faster HDD RPM-wise, it does tend to use more power and create a bit more noise. My personal preference for NAS devices is the 7200RPM class HDD because it creates a better picture performance-wise.

Another feature that I think it’s important to note is build quality. While there are many types of hard drives out there, not all of them are designed to work 24/7. One of the most popular uses of NAS devices is as a server and you need a special type of hard drive to handle that kind of workload. Fortunately, WD does have a superb line of HDD options and that line of products includes the RED NAS hard drives.

WD is an American computer HDD producer. They have been in business for more than 49 years and have a long history of making incredible products. I consider them to be very consumer-friendly as they put their products out in the market with an easy-to-understand nomenclature. WD uses colors to describe the HDD style that a customer might be purchasing. For example, the RED HDDs are used for NAS devices. Below is a list of WD’s current 3.5” hard drive options.

In addition to these storage solutions, WD also offers an enterprise system option with the HGST Ultrastar Hs14 HDD.

You might have noticed that the RED HDD option included above only provides a 5400RPM class drive. As noted above, a 5400RPM drive may work just fine in most use cases. But, for power users or for larger businesses, sometimes you just need a little more kick from your storage solution. This is why WD released the Pro version of the RED drive. This hard drive offers the same stability for always-on environments as the standard RED HDD, but the Pro version includes the 7200RPM class option. The RED Pro is also designed to work in larger NAS devices (up to 24-bay systems). These hard drives are engineered to handle increased workloads from businesses and home-offices alike. Just like the standard RED NAS hard drive, the RED Pro, offers users the advanced technology from NASware 3.0.

For the past few weeks, I’ve been testing out a set of four (4) 10TB WD RED Pro hard drives inside a Synology 5-Bay DS1019+ NAS device.  Even though I only have four of the five drive bays filled, the system has worked seamlessly. Installing them was simple. I just screwed each drive into a set of drive rails and then locked them into place within the Synology. Then, we fired up the NAS. I won’t get into the Synology system too much here as that review will be released separately, but to date, we’ve not experienced any issues with the hard drives. They have been running continuously as we access the NAS regularly and no matter what types of trials we seem to put the HDDs through, they seem to handle any workload just fine.

When I test out an external hard drive, I usually run it through a few benchmarking apps like Blackmagic Disk Speed Test and AJA System Test Lite. These tests will still work on the WD Red Pro drives even if they are locked away in a NAS device. You do have to make sure that you are connected to the same network as the NAS through a Ethernet cable. I did test data transfer through a WiFi connection as well as run the aforementioned speed tests while connected via Ethernet. The difference between the two connections — at least in my case — is that the Synology will connect as a cloud-based storage device if you only connect to it over WiFi whereas it will show up as a mounted drive if you use a wired connection. In addition to performance and speed tests, I also took note of the drives’ general health using Synology’s internal system monitor. The system report marked the storage pool as ‘healthy’.

The next test I completed was a HELIOS LanTest. This is a slightly different benchmarking option than Blackmagic or AJA. It does provide an average Read/Write speed, but it also looks at other performance measures the process. I had the test repeat 10 times so that I had a larger pool of data to look at. As it turns out, HELIOS had a very similar average read/write time as Blackmagic and AJA.

Finally, I completed a simple transfer test. For this test, I transferred a file from my MacBook Pro to the NAS device over high-speed WiFi (172.41Mbps DOWN/ 12.96Mbps UP) and timed how long the transfer took. While this might seem like an archaic way to test the performance of a hard drive, the truth is that there are a lot of factors and network conditions that contribute to the performance/speed of a NAS system and its hard drives. So, a simple timed file transfer test was an important test to run in conjunction with the other benchmarking tests.

I grabbed a folder that contained video files in it and started the transfer from my computer to the NAS. The folder on my laptop registered as 12.48GB in size, but by the time it finished copying to the NAS, it was only 11.62GB. I’m not sure why there was a loss in data, but all the files that were in the original folder were present on the NAS after copying. The transfer took approximately 5 minutes and 7 seconds to complete. That translates to a transfer rate of approximately 37.8MB/s, which is quite a bit slower than the wired network connection tests showed.

Based off of my real-world experience with the RED Pro hard drives from Western Digital, I don’t think I would recommend any other drives for NAS use to anyone. These are top-notch drives that perform above average. They are an investment money-wise, but when it comes to having reliable hard drives in a server or storage device, it pays to go for the premium hard drive option. The RED Pro HDDs offer users robust features that improve performance over the standard RED HDDs. For years, we’ve fought the losing battle of drive failure in NAS devices, but the RED Pros have not even hinted at a loss of data or a drop in performance. They are incredible companions for any NAS device.