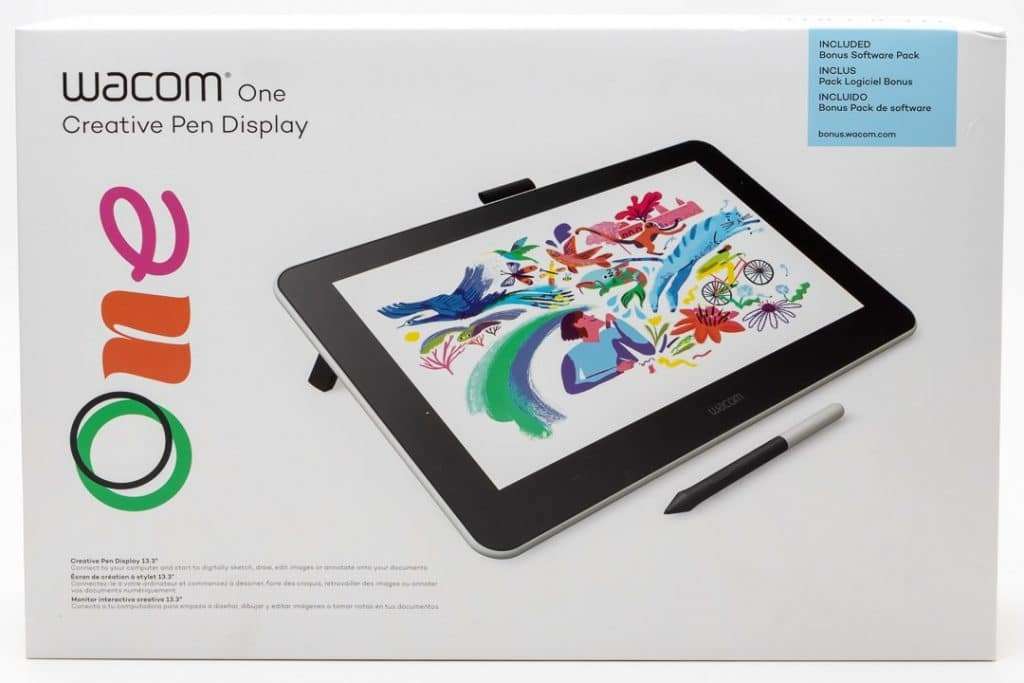 My fiancé grew up around a video production company. Her parents started it years ago and my fiancé was always enamored with the way the graphic artists used Wacom tablets. For years she’s wanted one of her own and this Christmas, I was able to grant her wish by gifting her a Wacom CTL4100 Graphics Tablet. I myself just included a Wacom tablet into my workstation a few months ago. I’m a photographer so I love having the precision that a Wacom tablet brings available to me as I edit and touch-up photos. With that in mind, I was super excited to hear about the release of the Wacom One Creative Pen Display as it seems like the best of both worlds — desktop-class applications with the flexibility of an iPad.

The Wacom One is a large format tablet that features a 13.3” screen.  It has the ability to connect to most computers (Mac or PC) and even some Android tablets and smartphones. The digital pen makes it possible to have the ‘real’ feel of writing when making edits, drawing, or annotating on documents. The Wacom One “feels like pen and paper and works like magic.” There is no need for batteries with the Wacom pen and the natural surface friction/minimal reflection screen makes it feel like you are writing on paper and not glass. The Wacom One is compatible with several different digital pens including STAEDTLER, LAMY, Mitsubishi Pencil 9800, Raytrektab DG-D08IWP, Samsung Galaxy Note and Tab S Pen. Wacom mentions on their website that more pens will be available in the future.

I think my first impression of the Wacom One is the same as what many people would have. How is this different from an iPad or Android tablet? The answer is actually quite simple. The Wacom One is designed to mirror the screen of the connected device. In my case, the host computer is a MacBook Pro. The benefit of using this type of device over just doing the project on an iPad is the user is able to use the desktop versions of the software you want to use versus a mobile version that you would get on an iPad or Android tablet. Even though mobile applications have become much more powerful in recent years, they are still not as robust as their desktop counterparts.

Set-up of the tablet is pretty easy. The only issue I really had was connecting to my MacBook Pro. Since it’s a late model MBP, it only has USB-C/Thunderbolt 3 ports built-in. All that really meant was that I had to use a dock to connect to the Wacom One. You have to connect an HDMI cable and USB-A cable to your computer. I do wonder, however, why Wacom doesn’t offer a USB-C to USB-C option for the connection since the cable that plugs into the tablet is USB-C. The Wacom One will then simply become a second monitor for your computer that you can draw on. It functions just like a regular monitor and you can have anything operating on it. For example, at one point I dragged my Music app window onto the Wacom One so it was out of the way. I also opened up a document window to see how typing would feel on it. Since my keyboard wasn’t right in front of the tablet it was a little strange, but it worked.

In addition to testing different types of apps and how they looked on the tablet, I did quite a bit of photo touch-up work using Adobe Lightroom and Affinity Photo. It really was quite remarkable how easy it was to transition back and forth between my main monitor and the Wacom tablet. I was able to use the keyboard fluidly while using the Wacom One Pen to complete the intricate finishing work that was needed on the photos. I was also very impressed with how sensitive the pen was. I’ve used other Wacom pads in the past that just didn’t give me the sensitivity I was hoping for. And this one was spot on. The pen does only have one programmable button but that suits our needs just fine.

I did find the backlight to be a bit on the dim side but found that brightness can be adjusted using the Wacom Desktop Center application.