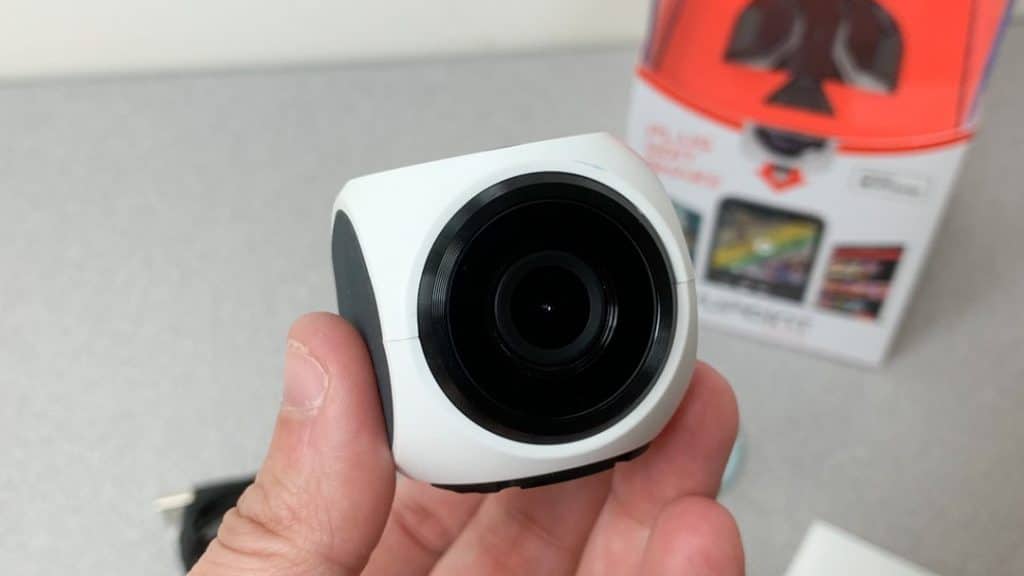 Capture moments that matter with this personal action camera.

This past week, we added a new member to a family – a four-pound Yorkshire Terrier. He’s still a puppy so he’s completely full of pep and vim. We’ve been having a lot of fun getting to know him and his personality and of course, we are taking tons of pictures and video. We’ve mostly been using our phones, but we have to be cautious because we don’t want him getting a hold of those expensive devices. As an alternative, I’ve added the VuPoint Share Q Lifestyle Camera into the mix to try and get things that are little more on his level.

The VuPoint Share Q Lifestyle Camera is a “lifestyle imaging solution” that allows you to create quick stories to share with friends and family. The camera comes equipped with either a USB-C or a Lightning connector for a feature that VuPoint refers to as INSTANT CONNECT. In addition to that, the camera connects to mobile phones via an app for Android or iOS devices. The camera records video at 1080P full HD with a 144º ultra wide angle lens. The camera is also waterproof up to 10 feet with a rating of IPX8.

I’ve used my fair share of action cameras and even easy share capture cameras like the Google Clips camera. The VuPoint Share Q is what I would consider a cross between the two different types of micro cameras. The camera is easy to use. There are two buttons on top of the camera — the power button and the capture button. The capture button is multifunction in that you can press it once to grab a still shot and press/hold the button to activate the video recordings. The camera will capture audio and video, which is a big difference from some of the shareable camera experiences.

The Share Q camera is quite durable. I did accidentally drop it once outdoors in a grassy area and it still operated fine after its fall. I love that the sides are all covered with a rubber/silicone grip. That feature makes it very easy to handle the camera even when it’s not on a mount. I did find it a little difficult to insert/remove the memory card because it’s so recessed inside the camera. At first, I also had the same difficulty with the Lightning connector as it snaps into place just above memory card slot. The camera lens does get dirty easily as it’s easy to grab the camera and have your fingerprints end up there. Fortunately, it’s very easy to clean the camera lens. The VuPoint Share Q comes with a standard action camera mount that should work with other action camera accessories, but it would have also been nice if a small tripod was included, or at least a ¼” screw mount so that it could easily be mounted to a tripod.

The app is pretty straightforward and it makes it easy to create stories to share, but it would be nice if it included a way to monitor what was being captured. There is a Bluetooth connection between the phone and the camera for remote control purposes, but there is no option for being able to see what you are shooting. I think that would be a great add-on for future app updates. It would also be nice if there was a battery monitor on-screen inside the app. There were a couple of times that I wanted to know how much longer I had to shoot, but there is no way to be able to tell how much battery you’ve used. I do like that the app allows you to pull in footage from the Photos app on your phone so that you can easily combine items you’ve just captured with those that are already stored on your device.

The footage I captured was ‘ok’ as far as quality goes. I was shooting outdoors with available light and even though it was early evening and bit overcast, the images and video came out a bit grainy. I would advise limiting low-light recording with this camera as it just doesn’t seem to capture photos and video well in that type of situation. I’ve included a couple of examples below. Images and video have been unedited except for trimming the video clip a bit and cropping the photos.

Footage quality ‘ok’. It’s decent, but still a bit grainy. I recorded video outdoors with available light and it seemed to be ‘lower’ quality. So, unfortunately, it can’t replace a primary shooting camera, but it is great for capturing memorable moments with family and friends.

I like what this camera’s purpose is, but think that it could stand to see some improvements made to make it really great. It is a sturdy little camera that can easily be used for family vacations and events when you really just want a record of what happened, but I don’t know that in its current state that it can replace the higher quality action cameras like GoPro. The VuPoint Share Q is really in a class by itself.