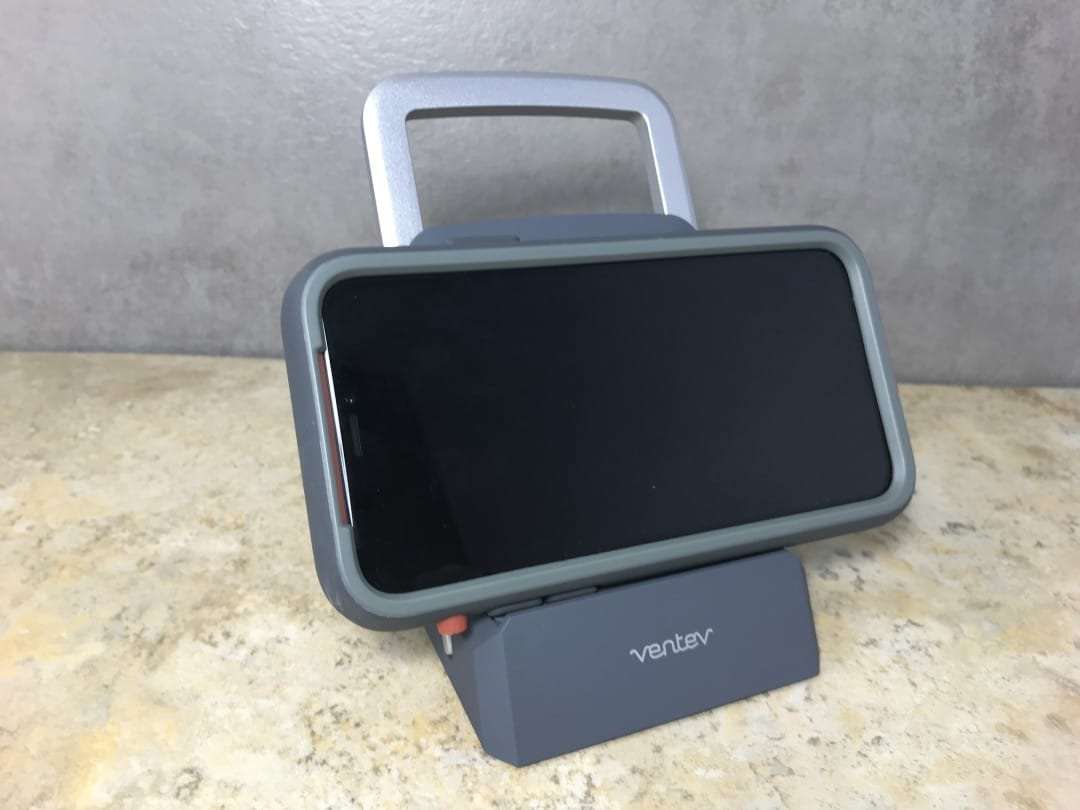 Technology continues to expand at a staggering speed.  As we become more technologically advanced, our need for power expands.  As of 2016, the average American home used roughly 897 kWh of power per month.  According to a pewresearch survey, half of us live in a household with three smartphones, a computer, a tablet and at least one streaming box.  As of August 2016, Cantechletter.com stated that many homes used an average of seven connected devices every day.  With the need to power our devices, came advancement in the methods to power them.  We have seen most AC adaptors go the way of the dodo bird, replaced instead with USB cables and charging bricks.  We have also seen multi-USB hubs and chargers that used higher wired output power.  Most recently, we have moved into the futuristic electromagnetic inductive charging that we now enjoy.  Ventev took this one step further and created a device for tomorrows tech, today. 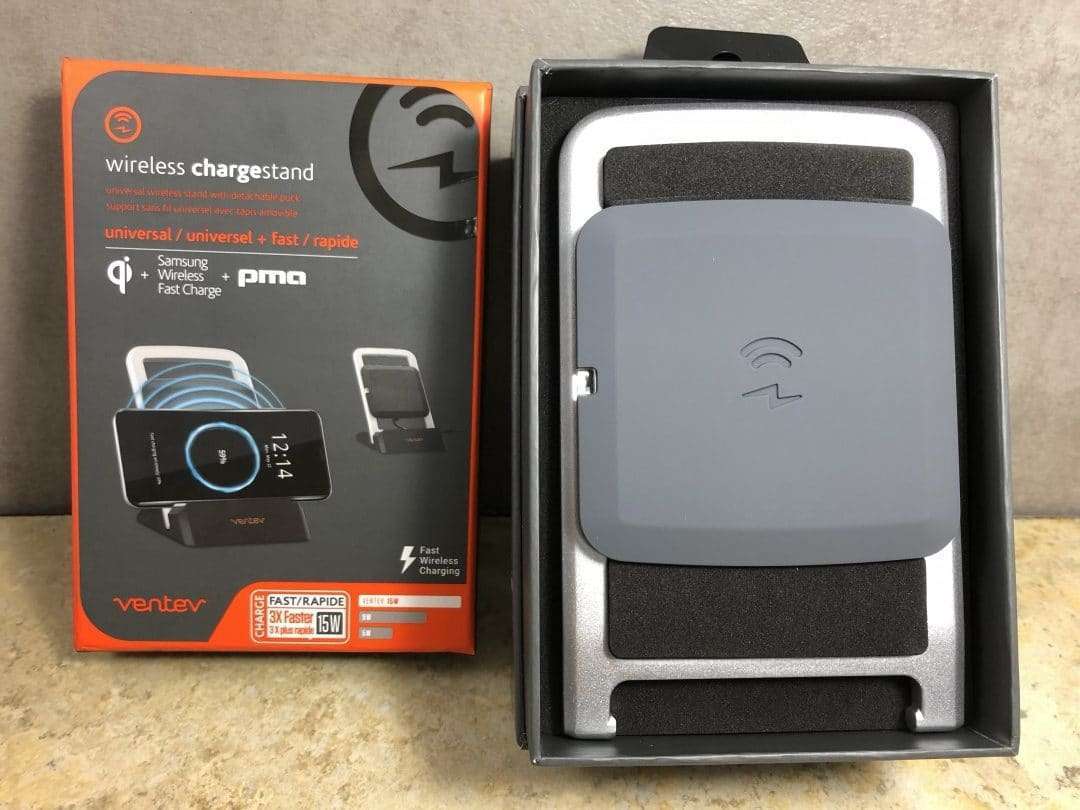 The Ventev wireless chargestand arrived in an attractive grey retail box with an energetic orange surrounding accent.  The six inches tall by 4 3/16 inches wide by three inches thick box was loaded with information.  The cover detailed the universal wireless charging standards Qi, Samsung Wireless Fast Charge and PMA and detailed the ability to charge your phone in vertical or landscape modes.  Ventev succeeded in creating an enticing case for their product, intelligently utilizing vivid, active images.  As a consumer, I appreciate two main presentation styles.  My favorite mode of product display is through direct visualization through a clear plastic window.  Secondly, I appreciate when companies use lifelike images to actively portray their device.  Since every inch of space sends a message to the consumer, pictures are worth more than a thousand words. The packaging promised a future-proof fast wireless charging experience at 5W, 9W and amazingly at 15W.  Excitedly, the charger is capable of more than what most of our modern phones require.

Rotating the packaging ninety degrees clockwise, you will learn that the product will work with Apple, Samsung, LG, Google, Motorola, HTC, Microsoft and Kyocera phones.  Rotate the box another ninety degrees, and you will find the busiest surface of the packaging.  Unfortunately, this surface was abuzz with verbiage and was a bit overwhelming.  Ventev included two useful images, one toward the top right and another along the bottom right.  The upper image provided a detailed/labeled description of the charger, the frame, LED indicator, base, detachable charging puck, and charging port.  The lower image used concentric blue circles to represent the charging field of the product.  Between the images, Ventev provided additional written information about the features and specifications of their charger (English and French).  You can enjoy up to 15W output over Qi and up to 10W output over Samsung Fast Wireless Charging.  The charger accepts 100-240V AC, can charge your device in vertical or landscape mode with an adjustable backing or you can remove the puck to take with you, on the go. 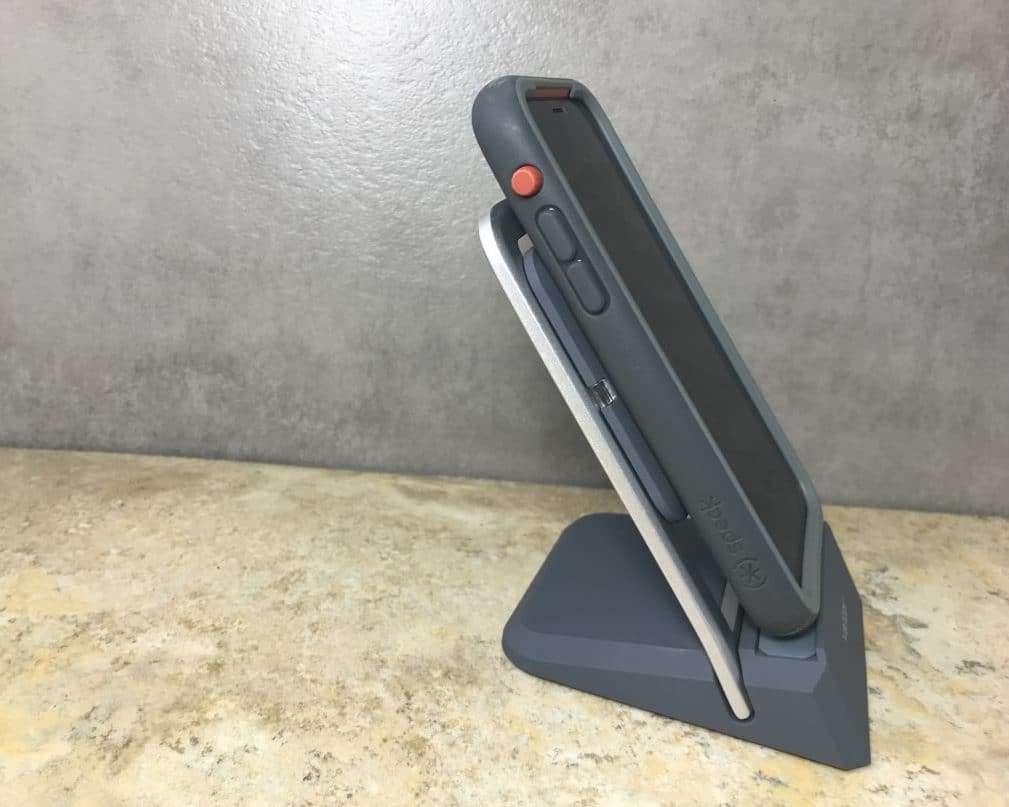 Removing the top from the box, I immediately experienced a weird foam/plastic/ozone smell.  The aluminum frame of the charger was resting atop a black foam pad and the charging puck was resting atop the duo.  The foam seemed to have imparted the strong smell on all of the included products but it appeared that the base and the puck absorbed most of the odor.  Luckily, I can attest that the smell abated after about 24 hours.  The strong aluminum frame measured 5 1/2 inches tall by 3 1/2 inches wide and had 6 internal teeth.  The teeth were designed specifically to accommodate the eleven teeth on the back of the charging puck.  This mechanism allowed the puck to be raised/lowered within the frame.  For a truly universal fit, you can enjoy a total of eight different positions.  Along the base of the frame, Ventev amazingly included two mildly angled legs,  The legs will fit into the 3 1/2 inches wide by 3 13/16 inches long plastic base, as will the lower crossbar.  You can reversibly position the angled legs into the base and obtain a more leaned back or more upright charging angle.  With the aluminum frame installed, the product measured 5 1/8 inches tall and weighed 5.9 ounces.

I appreciated the simple elegance of the chargestand.  The secure plastic base was relatively plain, except for a silver scripted ventev logo along the front.  The dark grey base and charging puck provided a visible contrast to the silver aluminum frame.  The dark colors and angular design fit perfectly on my bedside table.  The device was sleek, modern and provided an elemental/geometric feel.  The design was not meant to solely hide in the shadows.  Rather, the design will work with nearly any decor, enhancing even the most eclectic of tastes. Combining form with function, the underside of the base was mostly hollow, reducing the weight of the product.  Located at each of the four corners, ventev included a 3/8 inches diameter rubberized anti-slip pad.  These pads securely grip the resting surface, preventing slippage and possible damage to your smart phone.

Returning to the top, located just in front of the aluminum frame, there was an included rubberized 3 inches wide by 1/2 inches thick anti-slip pad.  The strip was designed to prevent our devices from slipping off of the charger.  The same lighter grey rubberized strips were also found on the back of the charging puck, which allowed the puck to be placed on a table/surface for portable charging.  Located along the bottom of the charging puck (toward the side furthest from the LED indicator), you will find the AC input port.   The included AC adaptor, with 71 inches long cable, was packaged beneath the base plate.  The 1 15/16 inches wide by 2 15/16 inches tall by 1 3/16 inches thick charger was a little bulky and unfortunately, the type A wall prongs did not rotate.  A USB C input would have been more favorable, but instead, we have a small AC adaptor plug.  Any lingering questions about the device could be answered by perusing the multilingual instruction manual, which provided a great summary of the ventev chargestand.

In addition to a visually stunning appearance, the charger packed a reasonably powerful punch.  For my initial test, I placed my iPhone X on the charger at 11:47 PM at 34% power.  By 12:59, my phone had increased from 34% to 74% and then to 81% by 1:15 am.  My iPhone X was fully charged by 2 am, just over two hours from when I placed it on the dock.  For a second test, I placed my iPhone X on the charger at 10:31 PM at 13% and found my phone to be at 24% by 10:49. These tests were completed without simultaneously using the phone.  Apple has recently updated their wireless charging capability after the 11.2 update.  Now, we can now experience 7.5W wireless inductive charging, which will hopefully expand further with future updates.  If you are looking for the fastest method to charge your phone, wireless charging is not the right direction to look.  Wired charging with the 5W included charger, the 12W iPad charger and ultimately the 29W Apple Charger with USB-C to Lightning cable will provide substantially faster charges.  In fact, if you can tolerate a tethered device in 2018, the USB-C to Lightning coupled with a 29W charger will charge your phone ~50% in 30 minutes.

Most of us put our phones on charge every night and do not require high rates of charging.  Some even think that rapid charging degrades your tech faster than a slower, more gentle charge.  Personally, I prefer convenience of the wireless charger to the need to plug-in and then remove a cable.  The ability to pick up my phone when desired and to simply set my phone back down, did not go unnoticed.  The charging speed of the Ventev device appears to be the best that Apple lovers can attain at present.  This is not too far from the promised 50% power in 60 minutes that I heard about online, but I did not have an Android phone to test the rapid 15W charging.  For my subsequent test, I played Ant-Man on my Movies Anywhere app, while simultaneously resting the phone on the charger.  The charger was able to provide enough power to continuously play the movie and still increase the overall charge of the phone. Starting at 10:53 pm with 23% power, I watched the movie until 11:13 and had 30% power.  7% power gain in that time may not seem like much, but as stated, I was streaming the movie while generating an additional charge.

You will have to decide what is most important to you, rate of charge or convenience of charge.  The Ventev device allows desktop viewing, upright viewing in landscape and horizontal modes and can accommodate any modern smart phone on the market.  I have used multiple wireless charging discs, and the experience has not come close to my experience from ventev.  They are a company that knows wireless accessories, and they did not fail in their presentation. Although this technology does not charge as fast as the 29W Apple charger with USB C to LIghtning cable, it is less costly.  Your phone will be charged by morning using both kits.  Personally, I would rather have the artistic geometric ventev wireless chargestand than a run-of-the-mill white charging block and USB cable.  Rating the device at 5/5 stars, I can honestly say that the ventev device is more than just a charger, it is desk eye-candy.
BUY FROM AMAZON