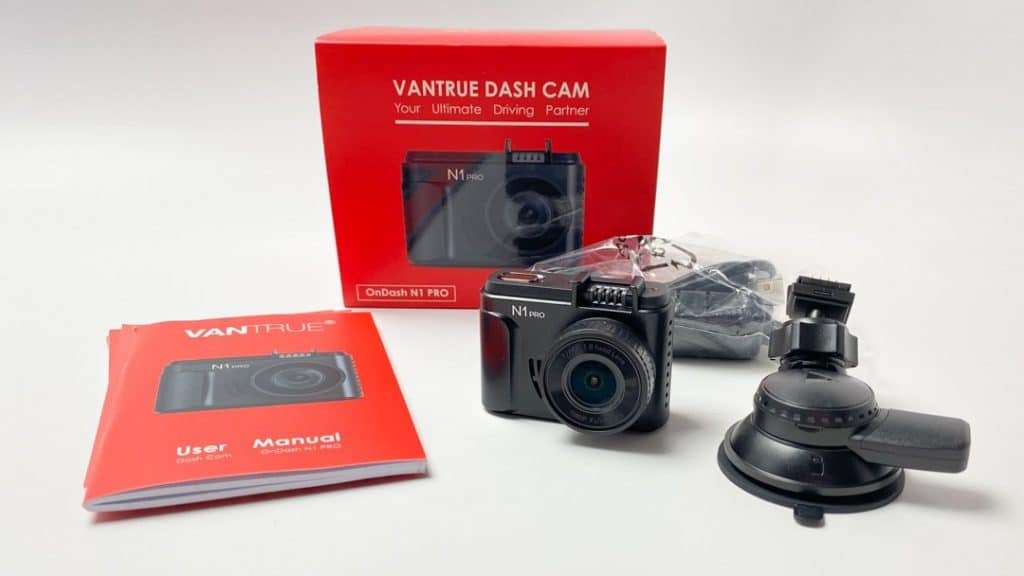 In a world of uncertainty on the road, it’s always in your best interest to make sure you are covered for every scenario. You start with the basics like insurance and everyday tools for minor repairs on the road.  What most people don’t think about is having an eyewitness to whatever may come up while you are driving. During the commute to and from work and every day, errands are when most people get into accidents. Sometimes it isn’t always clear who may be at fault when the police arrive. That’s why having a dash cam can save you so much time and money. While dash cams can be very pricey and worth it, I prefer the “every person can afford it” route. I was looking for a small, but powerful camera that wouldn’t obstruct my field of view while driving. A high-quality video feed is a huge plus. There’s nothing like having an accident and the footage be too grainy to even use.

I found a mighty, but small dashcam in Vantrues’s  N1 Pro Dash Cam.  The first thing I was looking for was the oversized profile. I already have a phone mount on my dash, so the very small size did not obstruct my field of vision very much. It is a little smaller than a standard action camera (think GoPro), which was perfect for my uses. Installation was simple. If you can install a suction cup with a lever, then you already have it down. The suction cup ended up being pretty strong. So much so that I felt like I would break the whole assembly when I pulled on it. This means that it will hold tight in most car crashes and serve its purpose. I opted not to use the included power supply because I have a wider car and chose to hide the wire along the edges of the windshield to make it look cleaner. There are some features that do require you hardwire the camera to the battery such as the 24-hour parking mode, which detects movement in front of the car even when it’s just parked. This is a handy feature if you want it and are willing to buy the hardware kit. I opted out of that as I primarily just wanted the standard dash cam experience.

For main features the N1 Pro Dash Cam has plenty. Some are standard like the 24-hour loop recording which runs on a loop and records over footage once the memory card fills up. The G-Sensor detects collisions and locks the recording down so you have the footage of your collision. The time-lapse recording takes intermittent screenshots while you’re driving to save room on your memory card, but the N1 Pro Dash Cam can take up to a 256 Gb memory card. I really like the collision detection. When the car is powered off, as long as it has a charge on the internal battery, it will turn on and record 20 seconds after it detects any collision.  I tried getting the N1 Pro Dash Cam to enable this feature while it wasn’t installed in the car to no avail, which doesn’t say much since even a small and slow collision does provide quite a bit of force. There is even an optional GPS, but that requires another separate purchase which I also opted out of.

The display on Vantrue’s N1 Pro Dash Cam is only 1.5 inches but it’s plenty big given how big the device is overall. With only 5 standard buttons on the body that anyone who has ever seen a camera will feel instantly familiar with. This made for an especially learning experience when I was just getting started. The lens does have a 160-degree field of vision. This makes for a nice wide-angle that a person would see out of their windshield. This gives you a true picture of what’s going on.  The Sony sensor and NOVATEK processor provide a clear and robust image in Full HD 1080 or 720. While driving you can also hit the mode button to take a clear image of what’s in front of you, or for emergency documentation. The N1 Pro Dash Cam also has a built-in microphone that will capture any audio but can be turned off. This is what I did to save more space in the memory card.

For such a small Dash Camera, Vantrue packed quite a few features into a small body. I was skeptical at first because of the very modest price at around $80, but all of my initial worries were soon laid to rest.