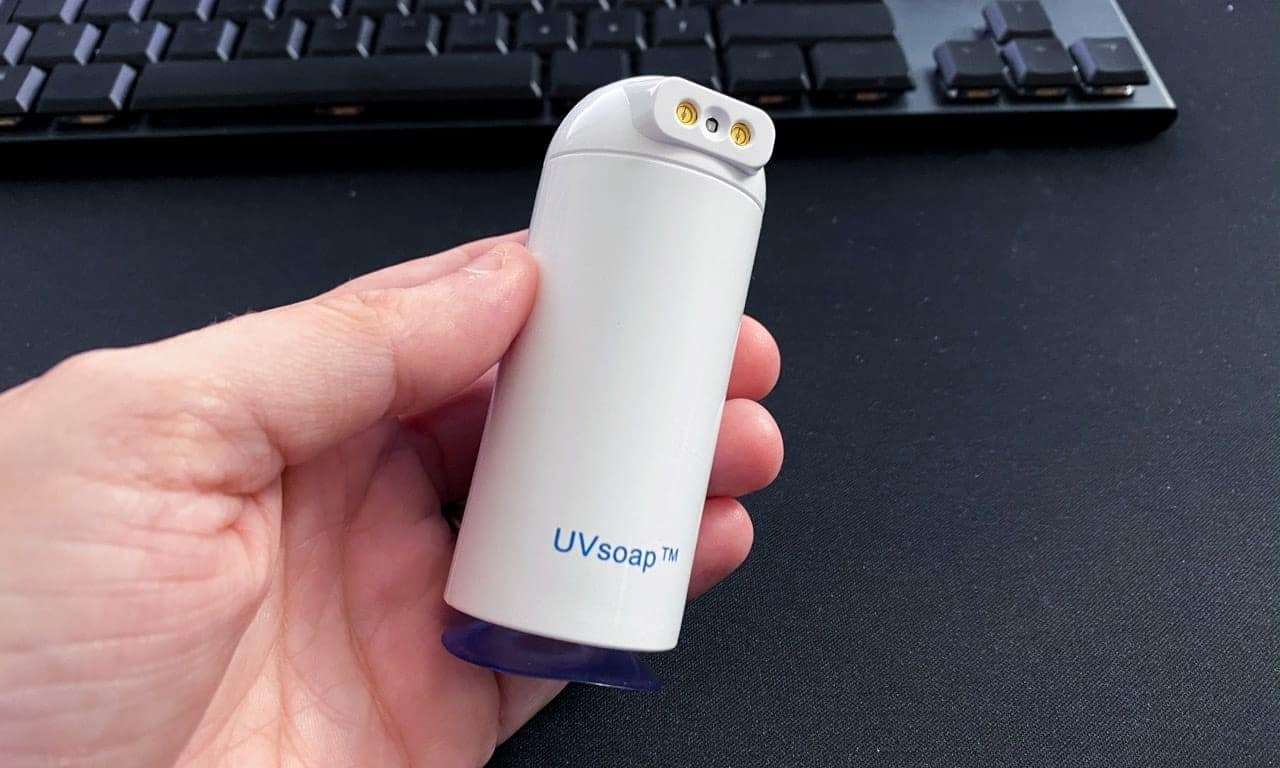 Sanitize the most touched area in your home with ease

If someone would have asked me a year ago if I thought UVC light devices would be all over the place I would have said, “No.” I say this as someone who already uses the PhoneSoap to sanitize my iPhone. I happen to be a germophobe and like knowing I can use it to kill the bacteria from my phone just by placing it inside. Even though there are people like me who are overly cautious when it comes to the spread of germs, I never thought that everyday people would be buying devices that use UVC light as a sanitizer. But, that is the world we live in now, and the UVC Surface Sanitizer from UVSOAPS is part of that target market.

The UVC Surface Sanitizer is a device designed to spray UVC light across surfaces in order to disinfect them. Two UVC LEDs deliver irradiation to a target surface. It’s considered safe and healthy and has the ability to eliminate up to 99% of infectious agents. It’s designed to provide quick, efficient sanitizing. It works by sensing the presence of a user thanks to its built-in IR sensor and then turning on after the user leaves its general area. The UVC Surface Sanitizer can work anywhere and it makes sure that doorknobs, payment terminals, and other high-touch surfaces are clean after each use. The sanitizer operates with wide-angle UVC coverage so that it can cover a large surface. The sanitizer can install on a variety of surfaces using its installation hardware (suction cup, 3M adhesive, etc.).

My UVC Sanitizer arrived in a nicely branded box wrapped in cellophane and when opened it I found a user manual, two circular disks, the sanitizer, and a 3-pack of double AA batteries. The basic installation of the device includes inserting the batteries into the device and then attaching it to an area above the surface you want to be sanitized. I ultimately chose a bathroom sink/counter area.

When I removed the device from the box, I tried to figure out how to remove the door for the batteries. It wasn’t obvious how the door was supposed to be removed, so I had to refer to the manual. The battery door does not feel like it’s designed as well as it could be. I could see it possibly breaking over time since you have to forcibly snap the door off and then push it back into place hard so that it locks. Once you do get the battery door off, the compartment shows an area for three AA batteries. UVSOAPS provides some generic batteries with the device. I don’t know how long they will last, but they work well enough to power the sanitizer initially. Because the batteries are awkwardly positioned in the compartment, I did have a little trouble getting the first one into place. After it was snapped in, the other two were very easy to install. I think it would be really nice for this to be a rechargeable device rather than use AA batteries the way it does.

The place I wanted to use the UVC Sanitizer the most was my front door. Unfortunately, it stuck out too far and my screendoor would not shut. I have a digital keypad on my front door so I thought it would be a great place to be sanitized since people have to touch the keypad each time they come to the door to unlock it. I’m guessing anyone with a screendoor will not be able to use this on their main door due to the same issue I encountered. I also think the front door might be a tricky spot to attach it because people could easily walk off with it.

The next place I decided to attempt to use the device was my kitchen sink. Since we are constantly washing our hands the second we come into the house now, I thought using it on the handles of the sink would be a great way to help keep that area germ-free. Low and behold, I could not find an area to stick the device. The window above the sink sat too far back and the wall just above the sink had too many small tiles for the sanitizer to adhere to. Like children’s book Goldilocks and the Three Bears, I had to find a spot that was just right. As it turns out, the third time was a charm as we found that using it in our main bathroom worked. The backsplash in the bathroom has large tiles and it was a non-porous surface, so the suction cup worked great (once the tile was cleaned). The sanitizer does come with adhesive plates that are similar to what you might find with a car cell phone mount, but even those aren’t really 100% secure.

It’s important to note here that the sanitizer will only turn on after the motion detector notices there is no movement in the area. In order to get the photo above, I had to wait patiently for the light to kick on by being motionless.

Since COVID-19 hit our world, a lot of people have been paying more attention to keeping everyday items cleaner. The UVC Surface sanitizer helps with this by giving you peace of mind that a large, heavily-used surface is being cleaned automatically. You get 10 minutes of your time back each time your door is opened or a faucet is turned on thanks to the UVC Sanitizer’s sensor. It always knows when it’s safe to generate the UVC light and clean the area. This a very cool device that has a lot of potential, but I think it ultimately feels more like a prototype than a finished product.