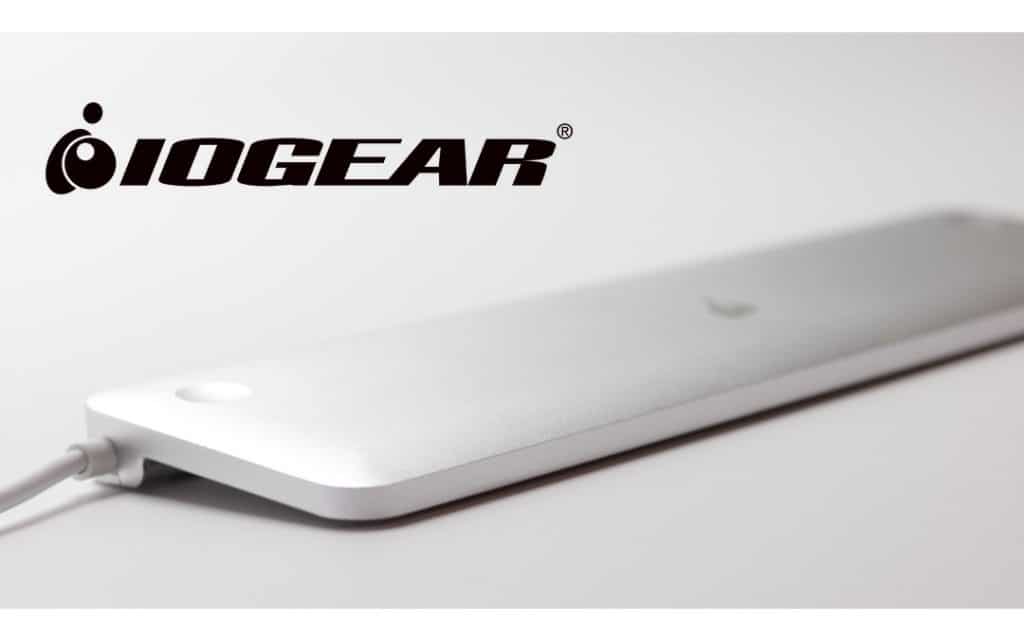 A stylish and ultra slim docking station for all your needs.

As computers become more and more mobile, we begin looking for products that help us to stay connected literally and figuratively. With new connectors coming out every six months or so and our computing systems continuously evolving, the need for a docking station becomes more and more necessary. I’ve had the pleasure of trying out many different docks and hubs that fit various needs and today, I have a review of the IOGEAR USB-C Ultra-Slim Docking Station, which makes it possible to connect to a variety of devices while remaining practically invisible.

The docking station comes packaged in a green and white IOGEAR branded box. There is actually a lot of information stamped all over the box describing the dock. It shows a diagram, which can also be found on the website, an image of the back of the dock, and details about the different connections available with the docking station. Once you open the box you will find the dock set inside preformed plastic. The dock has a built-in USB-C cable that is meant to plug directly into a computer. This connection will deliver not only audio/video signals but also data and with this dock, power (up to 60W). 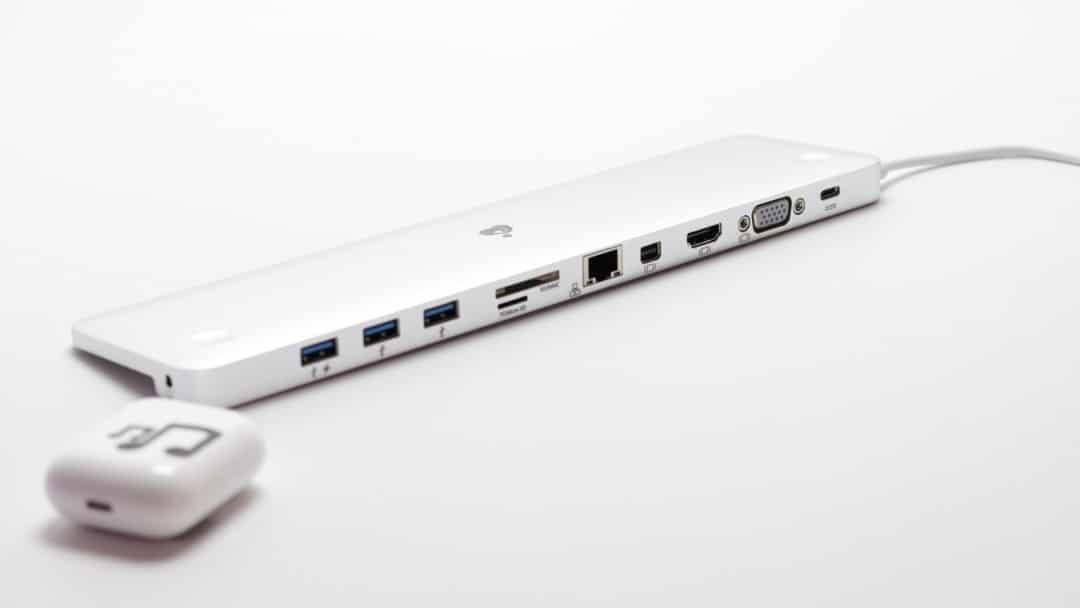 The USB-C Ultra Slim Docking Station allows you to instantly connect to up to 10 devices at one time. Those connections include:

As I mentioned above, this dock does support power delivery pass through up to 60W. I want to make a note here that this is not enough power to charge the 15-inch 2016 MacBook Pro with Touch Bar as it requires 87W. You can still use this dock with that model computer, but don’t expect the battery to receive a charge from it. Also, in order to receive power from the dock, you have to connect your USB-C charger to it.

The feature I most like about this docking station is that it’s designed to sit beneath your computer and provide an actual resting place for it. One thing to note here though is that the dock only measures 11 inches long so larger laptops may not fit as well. I believe the dock will hold the weight of the larger laptops, but it might be a bit awkward sitting on it. I opted to use my HP Spectre x360 laptop to test out the dock since it only requires 45W for charging and I wanted to take full advantage of the power delivery feature. Even though it’s quite obvious that the style/design of the dock is meant to pair with Apple laptops (it has the classic anodized aluminum finish), the dock will work with either PC or Mac computers. 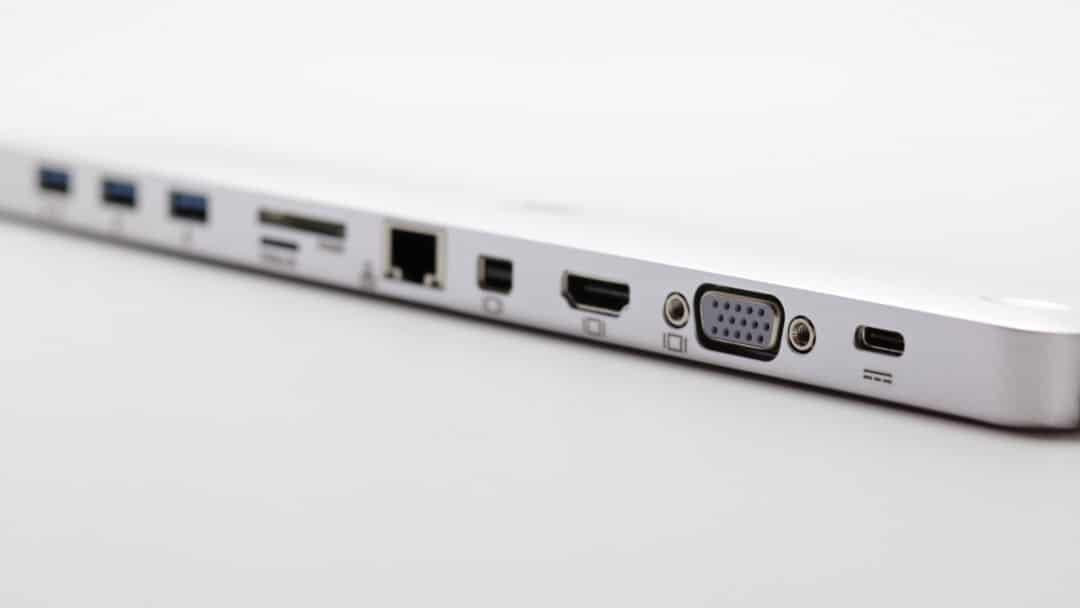 The first problem I encountered with docking my Spectre x360 to the IOGEAR device was the built-in USB-C cable. It lives on the right-hand side of the dock and my USB-C ports are on the opposite side of the computer. So, for the purpose of testing this as a stand, I flipped the dock over and used it upside down. While this made it possible for me to use the dock for testing, I don’t know that I would recommend it for long-term use since the top of the dock does not have non-slip feet on it.

The second issue I ran into is that my HP laptop was on a completely dead battery. As it turned out, the power delivery pass through wouldn’t provide enough oomph to get the laptop started with a dead battery. Once I got the computer started using a direct plug in through its power supply, I was able to switch off to the dock. Being that it’s a PC, I believe part of the problem was that it had to recognize the device from a powered state before using the pass through feature. Once the connection was made though, the laptop started charging through the dock with no problem.

The next test I ran is fairly standard for me. I used a USB 3.0 flash drive to transfer a large file to the laptop. The first step in the test was to transfer the file between a flash drive and the computer through a direct connection. This transfer took 13.84 seconds. Next, I took the same flash drive and plugged it into one of the UBS ports on the docking station. The transfer using this method took 13.64 seconds. The file was 1.47GB in size. 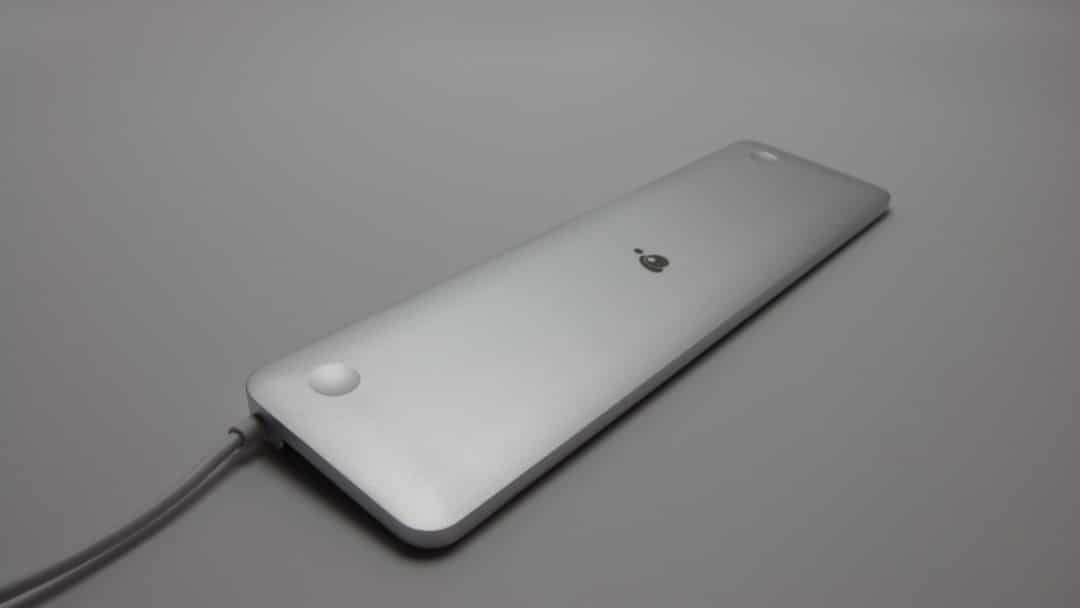 The next test I did was to plug in an SD card and a Micro SD card. As it turns out the HP Spectre will only read one card at a time. I’m not sure if that would be the case for all computers connected to the docking station, but according to the HP, the card reader was using E: drive no matter which type of card I was using. That said, I was able to preview video clips easily on the Micro SD card without transferring them over to the computer first. They played off of the card through the dock connection. Both card types mounted quickly and easily with no issues. One thing that is odd to me though is that the card slots are on the back on the dock. If you were using the dock as a stand for your laptop, sliding cards in and out could be a bit difficult since you would have to remove your laptop from the stand first.

Since one of the USB ports is dedicated for charging, I plugged in a portable power bank to give it a charge. I’m happy to report that the battery started charging right away. At this point, I would like to mention that my laptops power adapter, which was providing power to the dock as well as my computer (and now the power bank), is noticeably warm. The dock has a bit of perceptible warmth as well, but not as much as my power adapter. At the time of testing, I did not have a 4K monitor to plug into the dock, but I did test my HP Spectre with a standard computer monitor through the VGA connection and didn’t have any issues with the connection.

Overall, I’ve been very impressed with the dock’s performance. There are a few small design issues that I ran into because of the laptop I was using for testing. I don’t know that I would blame the docking station for that, but it would be nice if the output signal cable could be on either side of the dock or was longer in case someone has their ports on the wrong side of the computer. I would also like to note that even with that design issue, IOGEAR really did some nice work with the way this dock looks. If you look closely you will notice that the labels for the ports are engraved and not stamped on. It’s this type of ‘little’ touch that really makes IOGEAR products something to remember.
BUY FROM AMAZON