The Tylt Energi Sliding Power Case for iPhone 5/5s is unique in that there are actually two pieces to it. The smaller, exoskeleton plastic snap cover and the main battery module it slides into. This design allows for a quick dock/un-dock of the phone from the battery pack. While I was initially skeptical that the case would stay together (I have had a pretty horrible experience in the past with sliding style cases coming apart when taking them out of my front pants pocket), the two halves of the phone actually fit together very tightly. It takes a considerable amount of force to separate the two, but it is very easy to marry the two back together. You may ask yourself, as I did, why complicate the design by creating 2 pieces? It’s a valid question and the only real thought I have on this is that you could probably use most third-party docks with the phone and exoskeleton piece on.

The overall look of the full case leaves something to be desired in my opinion. This may not bother others, but the phone looks and feels very bottom-weighted. The case has a channel for the speaker and microphone that makes them forward-firing. This has the effect of making the phone perceptional louder when watching videos or using the speakerphone because now the sound is coming right at you. No one I talked to had any complaints about the quality of my voice or any comments about echoing which leads me to believe the microphone channel works at least as well as the stock down-firing mic.

The case uses a micro-usb port for charging both the case and the phone at the same time and is a massively useful feature for anyone unwilling to invest in multiple Apple Lightning cords. It is a USB pass-through connection meaning you should be able to sync the case with no issue. I was also able to use the USB connection in my Toyota 4-Runner to play audio through it.

The access points for the vibrate switch, volume buttons, and power button are a bit tricky to get used to, but decently useable once you get used to them. The only port that is a bit of a challenge is the headphone jack. While you can use the stock the iPhone earbuds with no adapter I am quite confident any larger plugs will require it. The case ships with a short adapter cable for just this purpose. It is a small trade-off for adding 2600 mAhs to your phone’s battery capacity.

The battery is the reason you bought the case in the first place. The iPhone 5 that I used in the test has an internal 1440 mAh battery. At its best, I have been able to get a little over a 12-16-hour day of heavy use from it. However, as tested, my 2 year old iPhone 5 is starting to show its age and the first thing to go has been its endurance. So, what happens when you add almost 200% to it’s battery capacity? Simply put, I haven’t had to plug my phone in during this 3-day test. The case is no longer able to charge the phone, but I still have 50% of my iPhone’s internal battery life. I didn’t run any special tests to quantify the usage preferring instead to use the phone as I normally would. I would estimate that when it is all said and done this case and the iPhone will allow around 60 hours of moderate to heavy use. That is VERY impressive.

The Tylt Energi Sliding Power Case has a small power/indicator button on the back of the case, near the bottom. When pressed, it will show a different color for each charging state. I wish this was a little more intuitive – I would prefer a multiple LED layout similar to those found on competing products. Holding this button will enable or disable the battery pack. If you aren’t used to battery cases, one very positive side-effect of this design is that while the battery case is on, the phone thinks it is plugged in. This means functions that take place only when plugged in, like the nightly backup or the new “Hey, Siri” option with iOS 8, can now happen anytime. 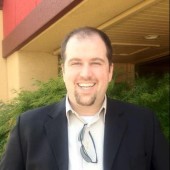 Sean is a new writer for macsources.com. He has a background in IT and multimedia consulting and has been using Macs since they were beige.