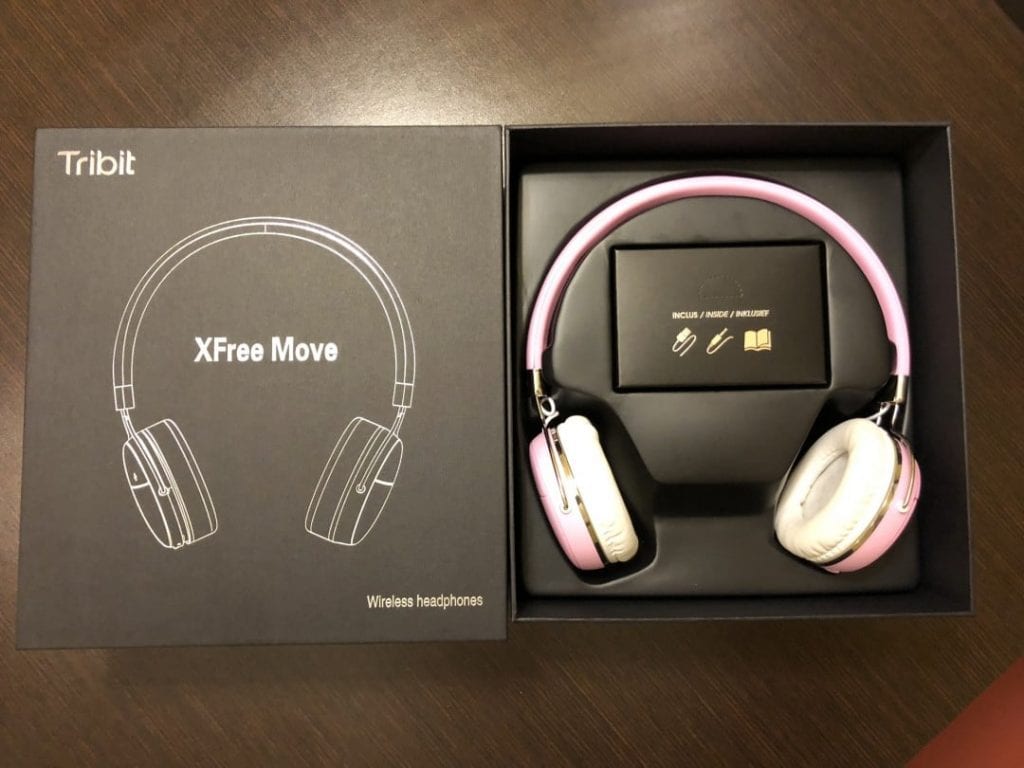 With dual 40W drivers, prepare to have soundstage quality sound for a very reasonable price.

Every January the tech world becomes abuzz with the excitement of CES in Las Vegas, Nevada.  Sitting at the airport awaiting our Frontier Airline Flight, delayed 4 hours, I decided to watch “The Hobbit” on my iPad Air 2 with a pair of Tribit XFree Move headphones.  The headset arrived in a 7 9/16 inches wide by 8 1/4 inches tall by 3 3/16 inches flat black cardboard box.   The packaging is rather bland, except for a silver etched ink outline of an over-ear headset in the center, “Tribit” etched along the top left and “XFree Move” etched in the middle of the cover.  The top, sides and bottom are devoid of any writing or imaging. The bottom has a small pink colored sticker with the word “Pink” written in white font.  The back of the box details some of the specifications of the headphones: 20Hz-20kHz frequency range, 14-hour talking time, 2 hour charge time, 150-gram weight (5.9 ounces) and standard Bluetooth Profiles (A2DP1.2/AVRCP1.4/HSP1.2/HFP1.6).  The profiles promise some of the newer connectivity protocols between your devices.  Despite the lack of pizazz of the packaging, the specifications sounded exciting. 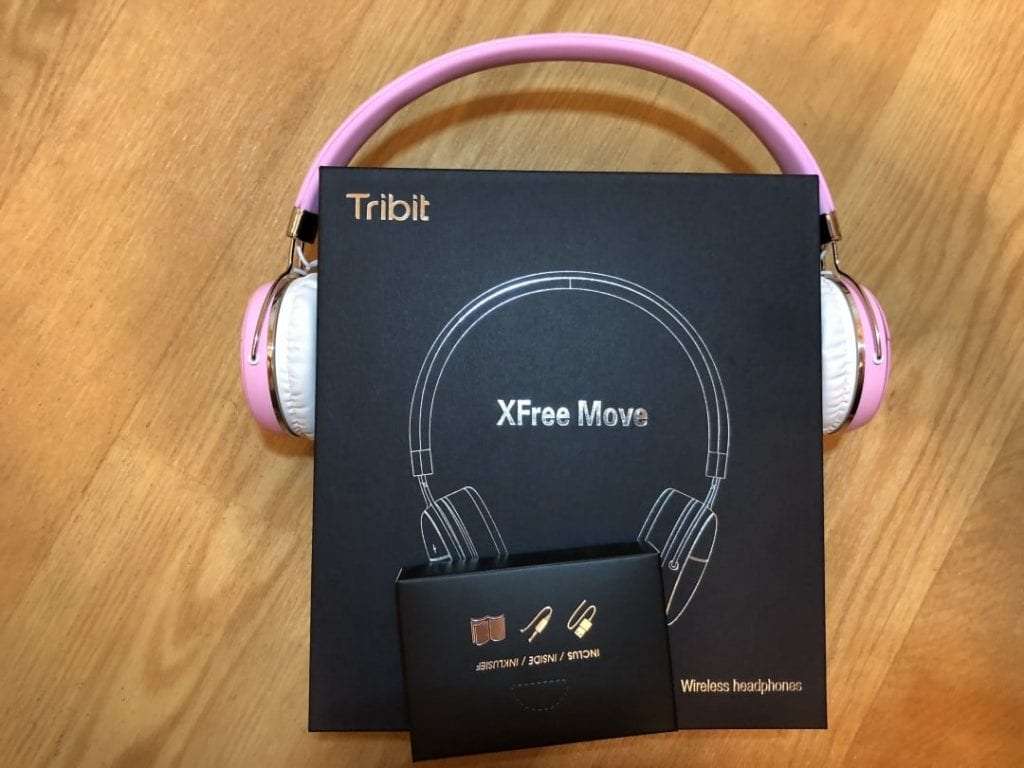 It is important to note that the little pink sticker was the only gem of information detailing the color of the headphones.  I knew about the color before reviewing the headphones, so this was not a shock to me.  However, if you are not careful, you may think that they are black or silver based on the packaging.  Do not assume this as these headphones are truly pink/white and will shock you if not prepared.  Opening the packaging, you will see the Tribit XFree Move headphones resting inside of a black plastic form-fitted shell.  Along the middle of the plastic is a small accessory box, housing the 20 3/4 inch USB-micro to USB-A cable, 49 inches long 3.5mm to 3.5mm cable and the bilingual 18-panel instruction manual.

The headphones have a Victorias Secret Pink coloration, with white ear cuffs and silver/chrome accents.  The left and right ear-cups were easily identified by looking inside the silver/chrome section at the end of the headpiece.  On the opposing side of the chrome, the company etched their Logo “Tribit,”  The headrest is minimally padded and on the first impression appeared to be uncomfortable.  The right ear cup is the control center and had two buttons, a large lower multifunction button (MFB) and a smaller volume up and down button.  Below the MFB button, the company placed the microphone and the Micro-USB charging port.   Beneath the left ear cup, you will find the 3.5mm to 3.5mm port for Aux-in connection.

Before the first use, it was recommended to charge the Bluetooth headset to full.  Out of the box, this took approximately 45 minutes for the LED to change from red to blue.  The instruction manual recommended charging for a total of six hours for the initial charge, which I did the night before my flight.  Pairing the headset with the phone proved to be incredibly easy, similar to most Bluetooth devices on the market.  Hold the power button (MFB) button for five seconds, and you will hear an ascending series of four tones followed by a pause and then a series of two ascending tones. Between the volume control buttons and the MFB button, the company included a LED panel, capable of blue/red color changes.  When in pairing mode, you will notice that the headphones LED alternates a blue/red coloration.  You can then navigate to settings, select Bluetooth, scroll to the bottom of the list and select “Tribit XFree Move.”  Once paired, you have the option of pairing to a second device, simply turn off the device and re-enter pairing mode.

My initial concern/criticism regarding comfort was unfounded.  Despite the limited padding on the top of the headrest, I did not experience any fatigue or soreness/irritation along my scalp.  Sitting in the airport watching my movie proved to be a rather rewarding experience as there is a degree of noise reduction afforded by the over-ear cuffs.  The 2 6/8 inches tall by 2 1/2 inches wide white ear cuffs were just large enough to cover my ears entirely, without compressing the helix or lobule.  I ran the headphones through the tests on the audiocheck.net website and was able to hear sounds at 20Hz (Low Frequency Response and Subwoofer Audio Test (10-200 Hz) and 15 kHz (High Frequency Response and Hearing Audio Test (22-8 kHz).  The packaging promised 20Hz-20kHz, and this was confirmed through testing.  The left/right and center channels were appropriately programmed, and the speakers were stereo, confirmed by the binaural tests on the audiocheck.net website.  If you have not completed the knocking test, be prepared to jump a little during the test.

If you have read any of my headphone reviews, you are probably rolling your eyes right about now, as I utilize nearly the same test tracks for all of my reviews.  To test bass, I use CeeLo Green’s “Bright Lights Bigger City,” Dark Knight Rises Joker Theme “Why So Serious,” the opening scene from Star Wars Episode III Attack of the Clones and the Gladiator Soundtrack.  Lately, I have added some Acapella music from Pentatonix and enjoyed the harmonies of The Gaither Vocal Band, as well.  To test balance, I have used the Far and Away and Braveheart Soundtracks, Acapella songs from Pentatonix and songs from Billy Joel “The Longest Time,” “Piano Man” and songs from Queen, “Somebody to Love,” and “Bohemian Rhapsody.”  To test soundstage, which is the perception to see the music placement/origin while listening, I use Horikawa Wandering.   I love the ping pong effect and bubbling effects of his songs, and if you close your eyes, you can see the sounds around you.   Once the test tracks are completed, I turn to my guilty pleasures of CCR, Alabama, and Lynyrd Skynyrd (“Tuesday’s Gone”).

Without the use of my streaming services (on the airplane), I returned to my movie “Hobbit the Unexpected Journey” and audible book listening.  I have to admit that I prejudged these headphones unfairly.  I enjoyed the sound of these headphones much more than I thought that I would.  The bass feels strong, and the clarity/mix of sounds remained enjoyable from ten clicks of sound on the iPhone to about seven clicks.  I do not tend to listen to anything above seven ticks as the volume tends to be painful.  I had my neighbor try the headphones and could barely hear the sound emanating from around the ear cups.  The earphones were a bit bulky to sleep with but did provide some much appreciated ambient noise reduction.  The Bluetooth range of 10 meters was more than adequate and the included protocols allowed prompt control of my iPhone X or iPad two music/movie function. 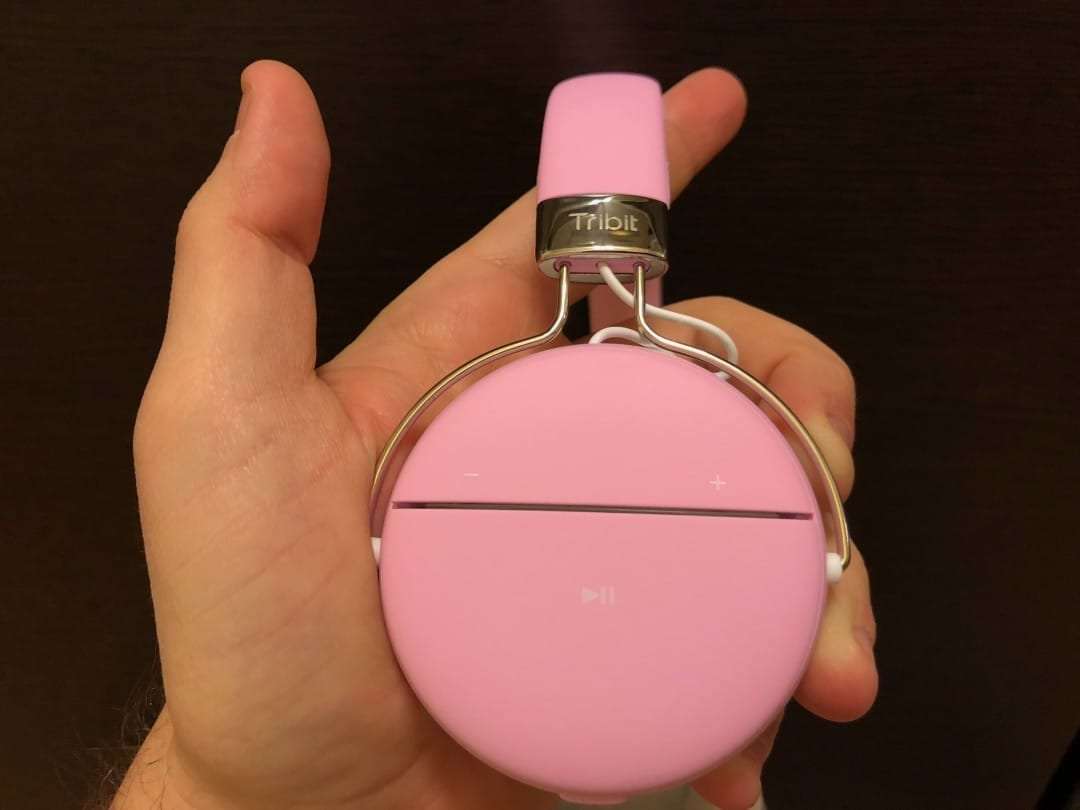 The buttons on the headset were responsive, adjusting the volume with a short press and changing the track with a long press.  The headphones have included call features, which often prove to be a disappointment.  Similar to most devices that I have tested, the microphone (located along the bottom of the right ear cup) picks up ambient sounds and sounds muffled/tunnel like to the person on the other end.  The MFB button quickly answered the call with a short press, ended the call with another short press and would decline a call with a long press.  This added feature may be a benefit to some but is a feature that I do not enjoy.

Summary:
I was fooled by the cover, definitely judging this book before evaluating it.  You can spend hundreds of dollars on a pair of headphones and then fearfully keep them at home.  Or, you can spend less than fifty dollars and take a good sounding, comfortable pair of headphones everywhere.  If pink is not your color, you can navigate to their website and purchase the same headphones in green or in black.  On a single charge, I was able to use the headphones from 9:30 am to 3:45 pm central, while sitting in the airport and then for another four hours on the airplane.  The headphones provide a great charge to utility ratio.  Overall, I would rate the product at 4/5 stars.
BUY FROM AMAZON