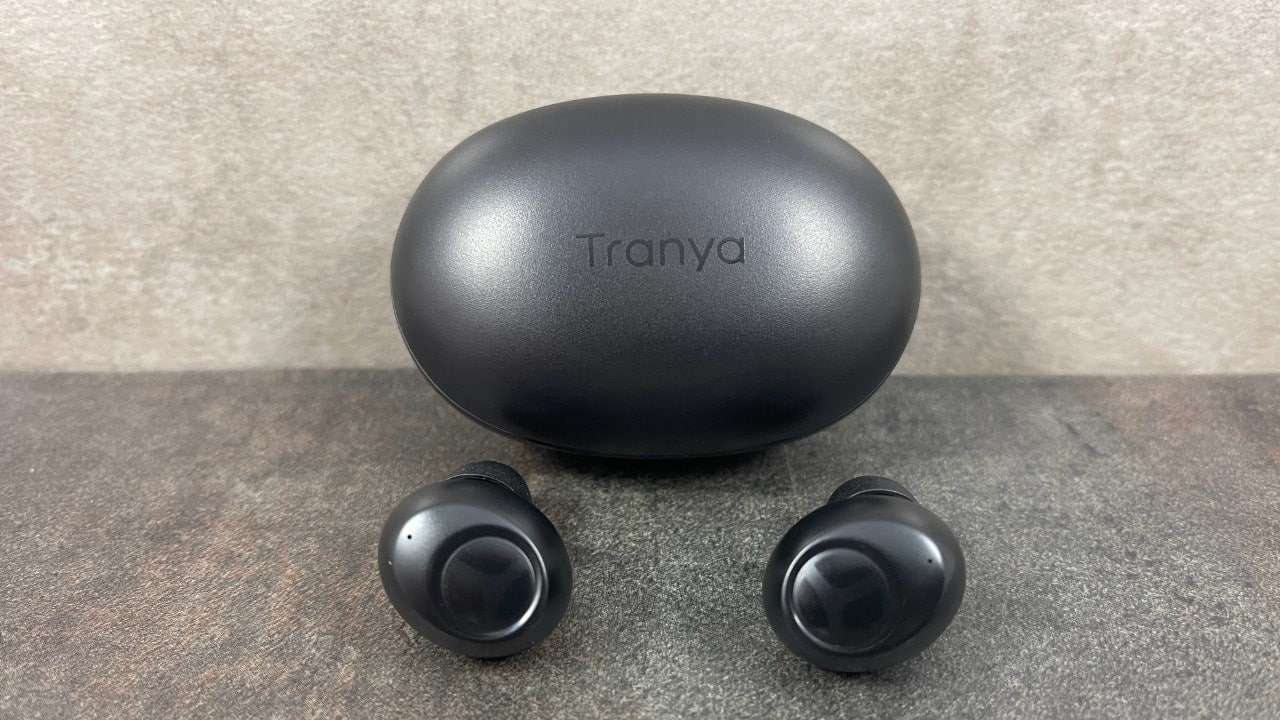 The Tranya T10 Wireless Earbuds arrived in a petite yet classy 3 15/16 inches square by 1 5/8 inches thick retail package.  The clean, sterile, white backdrop served as the perfect canvas for the cover features.  The silver Tranya name and logo were displayed along the top left, 12 mm Driver within a silver border was displayed along the top right, and T10 Game Mode Normal/Bass Boosted Mode was present along the bottom of the panel.  Despite the contrasting silver-on-white color scheme, the panel’s main focus was the image of the black Tranya earbuds across the center of the panel.  The stark black color provided a visually appealing contrast against the white background.  Additionally, the lack of shadow allowed a near-infinite space, which added to the overall allure of the dark earbuds.  The back panel continued the contrasting theme with the product name along the top, six detailed icons (12 mm Driver, Normal/Bass Boosted Modes, Fast Type-C charging, Game Mode (Low Latency), Crystal Clear Calls, IPX7 Waterproof), product manufacturing labels, Bluetooth icon, SKU barcode, and Transparency App scan code.  Lastly, I was impressed that Tranya chose to leave the top, side, and bottom panels unadorned/clean white.  Whereas some may overlook this subtlety, I find it impressive that they chose to enact a bit of restraint.  Many would have chosen to plaster every surface with some form of marketing.

To access the earbuds, I cut the outer plastic layer and then lifted the top of the box.  I was greeted by a thin plastic bag with a “Premium Sound 100% Original Tranya” sticker and the Tranya T10 twelve-panel User manual. Just beneath the panel, you will find a white plastic cradle with two cutouts.  The top cutout contained the 1.7-ounce, 2 3/4 inches long by 1 3/4 inches wide by 1 1/4 inches thick magnetic-close charging case.  The bottom cutout provided two extra pairs of earbud tips (small and large) and the 9 1/2 inches long USB-A to USB-C charging cable.  Before turning to the manual, I plugged the USB-C end of the cable into the posterior charging port on the earbuds and then the USB-A end into a standard Apple wall charger.  During the charging process (about 30 minutes), I jumped into the instruction manual to make sure that I was not missing anything important.  The first panel detailed the instruction manual and product contents, while the second panel showed an “IMPORTANT NOTES” section and requested you register the devices, charge them fully, and then adjust the rubber zips to fit you the best. 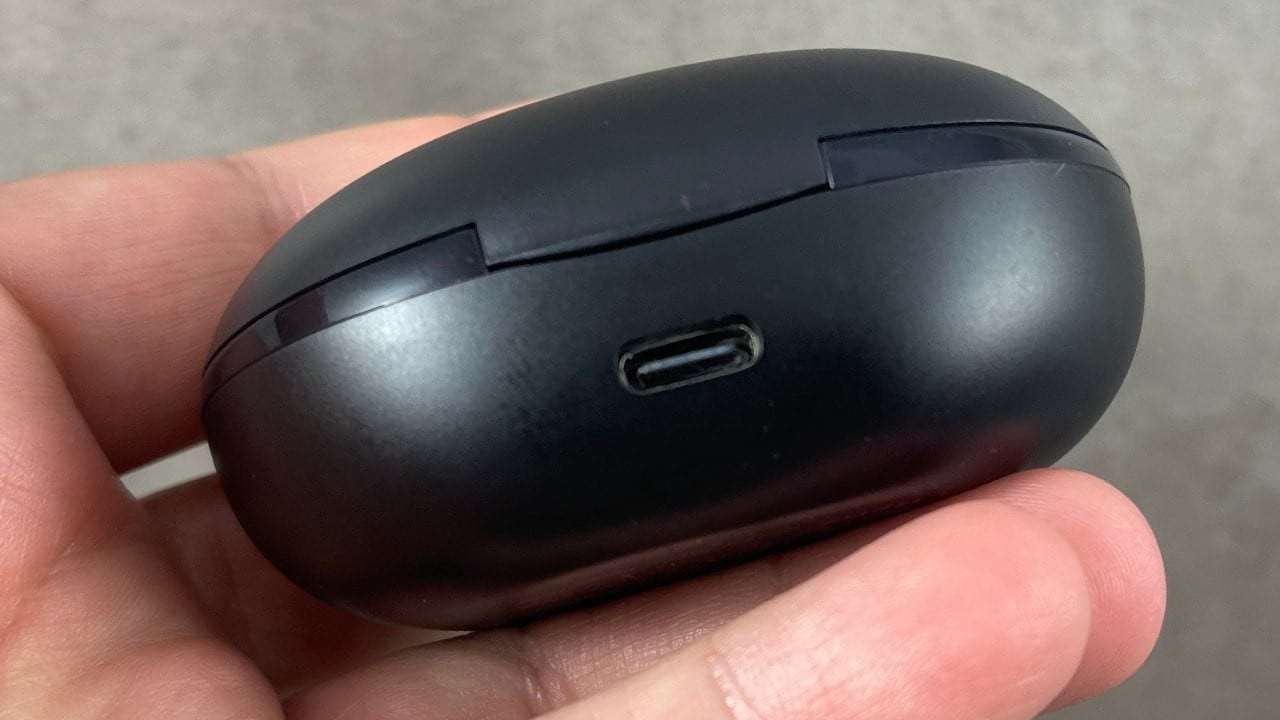 I was excited to review the touch controls outlined on pages four ad five.  Even though the manual presented them out of order, the controls seemed quite intuitive.  If you press and hold either the left or right earbud for 1 second, the device will play/pause the last song.  If there is an incoming call, you can use the same command to reject a call or end a call.  If you tap either device once, you can answer a call.  If you tap the right earbud twice you can increase the Volume, or you can touch the left earbud twice to decrease the sound.  Similarly, a triple touch of the right earbud will advance the track, while a triple touch of the left earbud will return to the previous track.  A quad tap of either of the earbuds will allow you to access Siri, while five taps of the left will rotate between Game Mode and normal mode.  If you tap the left earbud five times, you can cycle between Bass Boosted Mode and Normal Mode.  The instruction manual noted that you could use these modes to enjoy brighter vocals/crisp trebles in normal mode or warm deep bass in Bass Boosted mode. Interestingly, the button combinations worked quite well and were accurate nearly 9/10 times.  Occasionally, I noted that the volume would increase/decrease (double tap), instead of changing the track (triple tap). Otherwise, the Tranya device may have had one of the best button configurations that I have tested thus far.

Once the earbuds were fully charged, I removed each of the 0.2-ounce earbuds from their charging bays, and started the simple pairing process.  I lifted the lid of the earbud charging case and noted a small white LED at each earbuds’ bottom.  I removed the right, then the left earbud and placed them into the concha of my ears.  A female announcer vocalized “Power-On, Base Boost” in each of the ears.  I navigated to settings on my phone, selected BlueTooth, and then “Tranya T10” from the list. I cycled through the above tests, removed the earbuds from my ears, and then replaced them into their respective bay of the charging case.  These steps were outlined in the  “wearing” section within the instruction manual. Like the descriptions above, the manual did a great job describing the steps in both verbal and pictorial form. When power is low, replace the earbuds into the charging case, plug the included USB-A to USB-C cable into the back of the device and wait for the cycle to complete.  The bank of LED on the front of the charging case will illuminate and describe the remaining Power: 1 LED <25%, 2 LED 25-50%, 3 LED 50-75%, 4 LED 100%.  I have used the earbuds over the last week for a variety of tasks.  I have used single and dual earbuds to listen to “The Sandman” on Audible, Pandora, Amazon Music, Apple Music, to watch Big Brother on Paramount+, Bad Batch on Disney+, and Suicide Squad on HBOMax.  I was impressed with the earbuds’ battery life and the ability to gain up to three additional charges with the charging case.  The 0.2-ounce earbuds lasted approximately 7 hours (8 hours listed), with the volume at 50% and Bass Boost in place.

For the past week, I have enjoyed the comfort of the inexpensive Tranya 10 earbuds.  At nearly 1/10 the cost of a pair of Apple AirPod Pros, I was impressed with the sound output, the blend, the battery life, the IPX7 water resistance, and the comfort.  I was able to jump, jog, ride my bike, and rest on my side/pillow without ear fatigue.  Additionally, I was pleased to be able to listen for prolonged periods without canal strain/pain.  I loved that the USB-C charging tech allowed quick charging of the case.  The online materials suggested a 10-minute charge could provide a 60-minute playtime.  I placed a nearly depleted pair of earbuds back into the case and was pleased to see that this did provide quite a bit of charge.  The touch controls were markedly better than I had expected, and as noted above, proved to be quite responsive.  The device provided volume forward/back, track forward/back, Siri integration, Deeper bass mode (why would anyone want to change), and game mode, but did not provide active noise canceling or Passthrough sound.  If these features are important to you, it may be the only reason not to purchase the high-quality, low-cost Tranya T10.

To test the sound output, I navigated to the audiocheck.net website and ran through my typical battery of tests.  I started with the Low-Frequency Response and Subwoofer Audio Test (10-200 Hz) and heard the rumbling bass at 20Hz.  I repeated this test in normal mode and found the same result.  For the second test, I used the High-Frequency Response and Hearing Audio Test (22-8 kHz).  Like the Low-Frequency test, the male announcer will walk you through the frequency changes.  As we get older, or suffer pressure/sound ear trauma, we lose the higher frequencies first.  Thus, it is not uncommon for adults to have a limit of about 14-15kHz, while children have up to ~18kHz.  The upper range of hearing is estimated to be around 20kHz.  For the third test, I evaluated the channel programming with the Left/Right/Center test.  I found that the programming was done correctly and allowed for quality stereo sound.  For the ultimate audiocheck.net audio test, I turned off the lights, pulled up the Stereo Perception and Sound Localization Test, and experienced the binaural knocking sounds.

The earbuds easily passed the above tests in both normal and bass boost modes.  To further test the sound of the 12mm drivers, I listened to a variety of 8D audio tracks.  Namely, I listened to “Sound Of Silence (3D Binaural Audio)- Simon and Garfunkel Cover-Jarvis Brothers (Ear to Ear), Pentatonix “Hallelujah” 8D, Disturbed “Sound of Silence” 8 D, and Enya “Only Time 8D.”  With a new pair of headphones, I find it difficult to avoid my favorite artists/songs.  I listened to Queen’s Live Aid on Youtube with the standard and Low latency and found the video:Audio was much better on low latency mode.  I listened to the Rocketman Soundtrack, to the Star is Born Soundtrack, and then got lost in some CCR, Alabama, Beach Boys, and Styx. I changed between Game Mode on/of, bass boost, and normal modes.  I found that the game mode improved the sync of the video:audio and took away a little of the warmth/fullness.  However, I enjoyed the better codec/playback features.  I watched several YouTube videos to test this process (Elton John/George Michael-Don’t Let the Sun Go Down on Me (Live Aid 1985) and found the above tests easily repeatable.

Over the past few years, I have tested dozens of earbuds and have found several that have lacked the features of this ~$30 pair of earbuds.  I loved the size/shape of the charging case, the fit in my ears, the waterproofing, the battery life, the earbud shape/feel, and the overall comfort of the earbuds.  I watched several movies on Vudu, Paramount+, HBOMax,Netflix, and Amazon video and found the earbuds well worth their price. To complete my review, I used a mix of Amazon Music and Apple Music to burn through my test tracks in Bass Boost and Normal Modes.  I listened to “Far Over The Misty Mountains Cold” in The Hobbit, CeeLo Greens “Bright Lights Bigger City,” and the “Train Song” by Holly Cole.  I liked the Bass Boost better for each of these songs but felt the normal mode was quite good as well.  To test the mids/uppers, I used“Caribbean Blue,” by Enya, and the Braveheart, Far and Away, and Robin Hood Prince of Thieves soundtracks.  Even within the Bass Boost mode, the uppers did not get washed out, nor did they seem to lack the sparkle/pop expected of instrumental pieces.  I liked the blend, I liked the sound, and I liked the experience.

Whether listening to music on the go, in a dorm, in an office, or lying in your bed, the Tranya T10 earphones provide features beyond their price point.