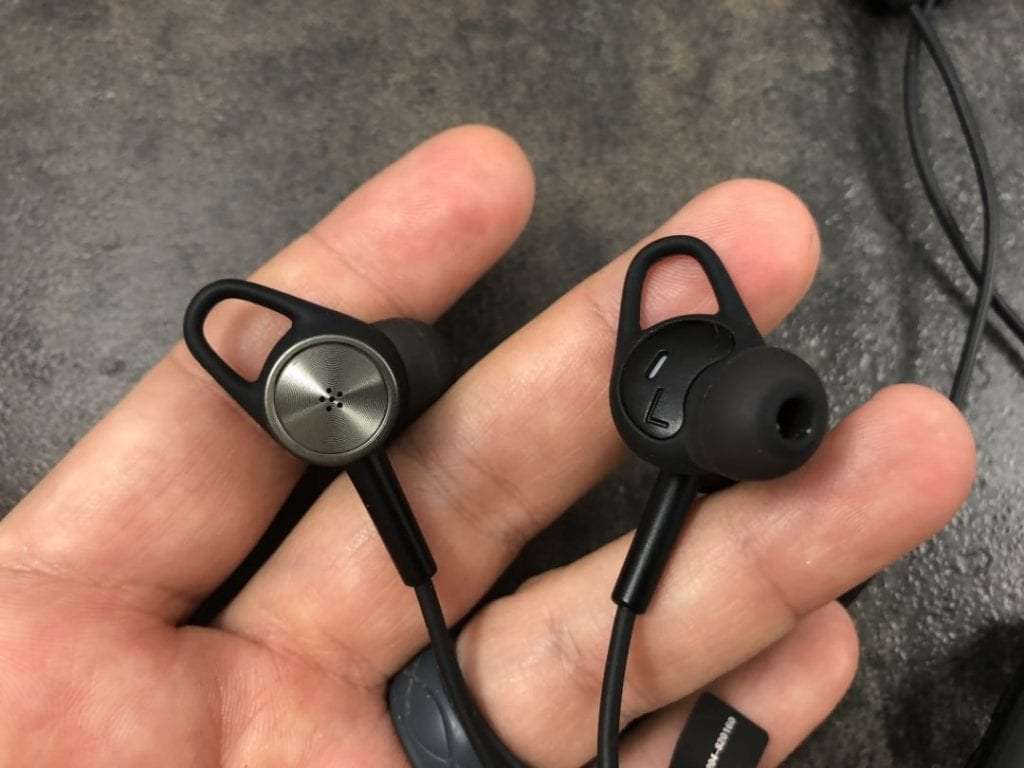 When it comes to music, movies and books, each of us should be able to enjoy what we like, whenever it is convenient.  If you purchase an Apple phone, a pair of earbuds is provided with the device.  If you are looking for the cheapest option, you cannot get much cheaper than that.  Perhaps you want an upgrade but do not want to break the bank?  Luckily, there are plenty of options available on the market to choose from.  TaoTronics in-ear earphones arrived in a rather nondescript silver 5 5/8 inches wide by 7 3/8 inches tall by 1 1/4 inches wide package.  The cover was devoid of imagery and verbiage, save a single TT icon along the bottom left of the cover (your bottom right).  The top, left and right panels, similar to the cover, were also barren.   The back panel provided some information about the product, noting active noise canceling, a QR code, typical product labels, origin/manufacturing information and briefly announced that the earphones connected via Bluetooth technology.  Except for the 1 7/8 inches wide by 1-inch thick labeling sticker, stating “TaoTronics Neckban…ancelling MEMS Mic,” across the top panel and “Active Noise Cancelling Wireless  Stereo Earphones,” on the back, the consumer would not know what they were purchasing.  Since we all know that we judge a book by its cover, few of us would choose to buy this product without clearer details about the product.  To access the contents within the box, open the upper tab and remove the black plastic tray.  The first thing that you will likely notice is the 35 1/2 inches long earphones resting atop the thin plastic tray. 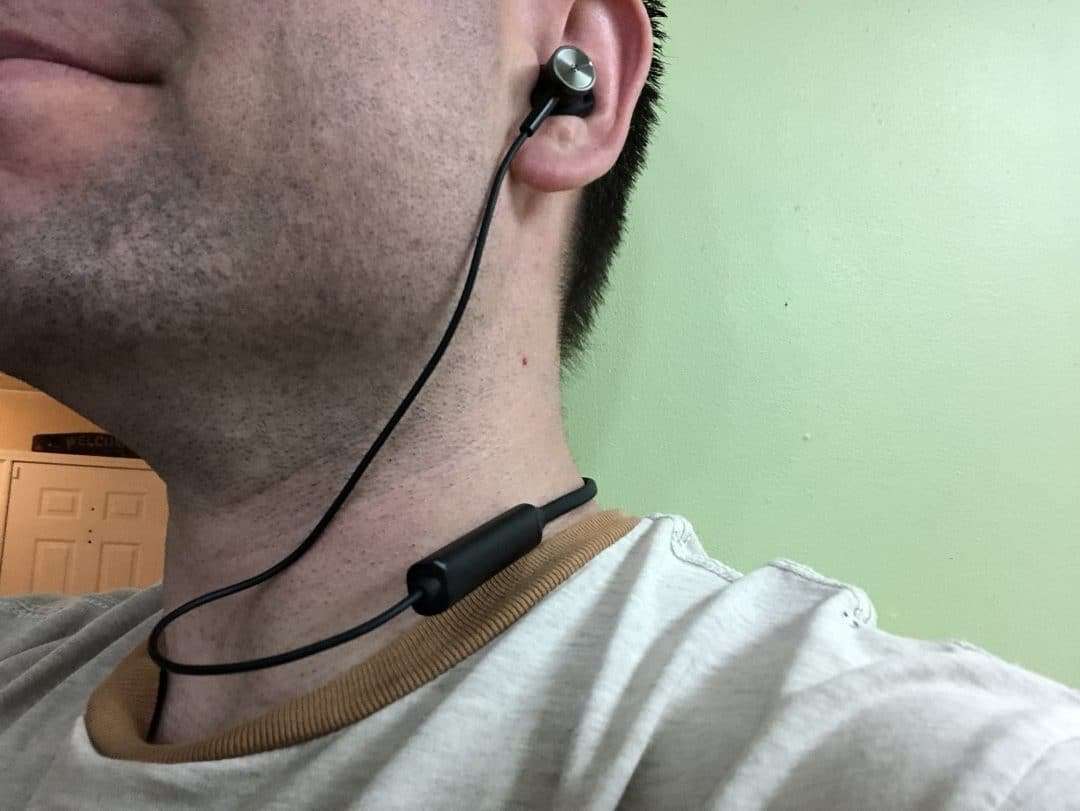 The winged earcups were placed in the middle, and the around-the-neck portion was draped around the outside.  The three-button in-line control bar was located 3 3/4 inches from the right earcup.  The 2 inches long by 5/16 inches wide by 1/2 inches thick controller had three etched buttons, labeled  “+,”  “>,”  and “-.“  The buttons were easily palpated and had a nice click-feel.  If you rotated the in-line controller ninety degrees, you would find a single micro USB charging port along the side.  As you move distal to the in-line controller, you will find 4 1/4 inches of round cord before you get to one of the two 2 3/8 inches long by 1/2 inches wide by 1/4 inches thick battery bar.  These bars flanked the comfortable 10 3/4 inches long flat neckband.  I appreciated the design of the neckband, as the cord was angled such that the flat band rested perfectly along the neck.  Located on the other side of the neckband, you will find the second battery bar.  Between the left earcup and the second battery bar, there were 10 1/4 inches of round cable.  TaoTronics did a great job at balancing out the weight between the left/right side, preventing the earphones from dragging one way or the other.  As an added feature, each of the ear cups had a posterior magnet, which allowed them to connect while not in use.  Visually appealing, Taotronics did not seem to leave many features out of these inexpensive earphones.

Beneath the plastic tray, you will find an accessory bag containing a septilingual instruction manual (7 Languages), business card noting product registration, support email, phone number, and 18-month warranty, an exceptionally short 7 1/8 inches long USB-A to USB-micro cable and a separate bag of extra tips/wings (small and large).  The product arrived with the medium set installed.  The pre-installed tips proved to fit my canals just fine, better than the large or small accessories.  I was very pleased to find oval tips for this device, as I have grown rather fond of oval tips over round ones.  If the pre-installed tips do not work for you, simply pull outward and remove the installed tip.  You can either leave the wing in place or slide it off and exchange it for one of the other two sizes.  The best part about the accessories was the ability to customize the fit to each ear.  Perhaps one of your canals is larger than the other, or perhaps one of the wings does not fit as well into your concha (the bowl part of your ear)?  In that instance, you would have the option to change the tip/wing to fit you.  The lightweight around-the-neck earbuds appeared to be well designed and quite comfortable.  Turning back to the instruction manual, the most beneficial aspect was the labeled diagram on the first page. The subsequent few pages listed the methods to use the device and the package contents.  The button configuration proved to be standard, with short press volume-up, play/pause, and volume-down and long press next track, power on/off, previous track.  If you double press the MFB, this will deactivate the ANC.  If there was an incoming call, you could press the multifunction center button to answer the call, again to hang up the call or hold the button for a few seconds to reject the call entirely.

Just like other Bluetooth devices, I needed to charge this device before using it.  When I plugged it into a standard USB-A wall plug, the LED turned red.  After about 30 minutes, the LED changed to a blue color, alerting me that charging was complete.  The pairing process proved to be straightforward, thanks to the verbal cues. Hold the multifunction button (MFB) for two seconds, and you will hear a female voice state “Power On.”  If you hold the MFB button for three to four seconds, you will hear the same voice alert “Pairing.”  When done with the headphones, press the central MFB button for two seconds, and you will hear “Power Off.”  For the first use, I held the MFB button for three seconds and then navigated to settings, Bluetooth and found/selected TaoTronics TT-BH042.  I placed the medium tips into my ear canals, and Apple Music started playing immediately.  If you have used ANC earphones previously, you may have experienced the pressure-feel that the earphones provide.  The outside microphone actively listened to the outside world and created a perceptible background buzzing/pressure.  Double pressing the MFB button will change between the ANC and non-ANC modes.  I did not mind either of the modes and found them both to sound okay (more on this below).  The major difference between the two modes was the battery duration.  The Amazon page stated that the TaoTronics TT-BH042 should have 8-hours of continues use with ANC on and 16 hours with ANC off.  I wish that the LED colors changed with the modes or that there was a verbal cue alerting me to the mode status.  I also did not like that the music continued playing when the magnets were attached.  A few other devices that I tested had this as a feature to pause music.

To test the sound, I navigated to audiocheck.net and used the Low-Frequency Response and Subwoofer Audio Test (10-200 Hz), the High-Frequency Response and Hearing Audio Test (22-8 kHz), the Left/Right Stereo Audio Test and “The Real Thing” within the Stereo Perception and Sound Localization section.  I was pleased to find sound at 30Hz, but a little disappointed that the low sound was a little lacking.  However, for the sub $50 price, the inclusion of ANC, the around-the-neck status and water resistant nature, my disappointment was short lived.  I heard the upper sounds at 15kHz, which is on par with other devices.  Our hearing is age-dependent and individualized, based upon the experiences that we endure.  Most of us will be able to hear 14-15kHz by adulthood, but this dwindles as we age.  The left/right/center channels were programmed well, and the stereo earphones simply worked.  Once these tests were finished, I used my standard test tracks.  To test the bass, I use Holly Cole “Train Song,”  “Why So Serious Joker Theme” Dark Knight Rises, Cee Lo Green “Bright Lights Bigger City” and the opening sequence to Star Wars Episode 2: Attack of the Clones.  If you have not listened to Train song, you are missing out on a nice bouncing bass line.  For a more bass-centric experience, I love to listen to the Gladiator soundtrack.  Each of these tests was passable, yet somewhat flat.  I enjoyed the overall sound and did not care as much that the lows were a little weak. 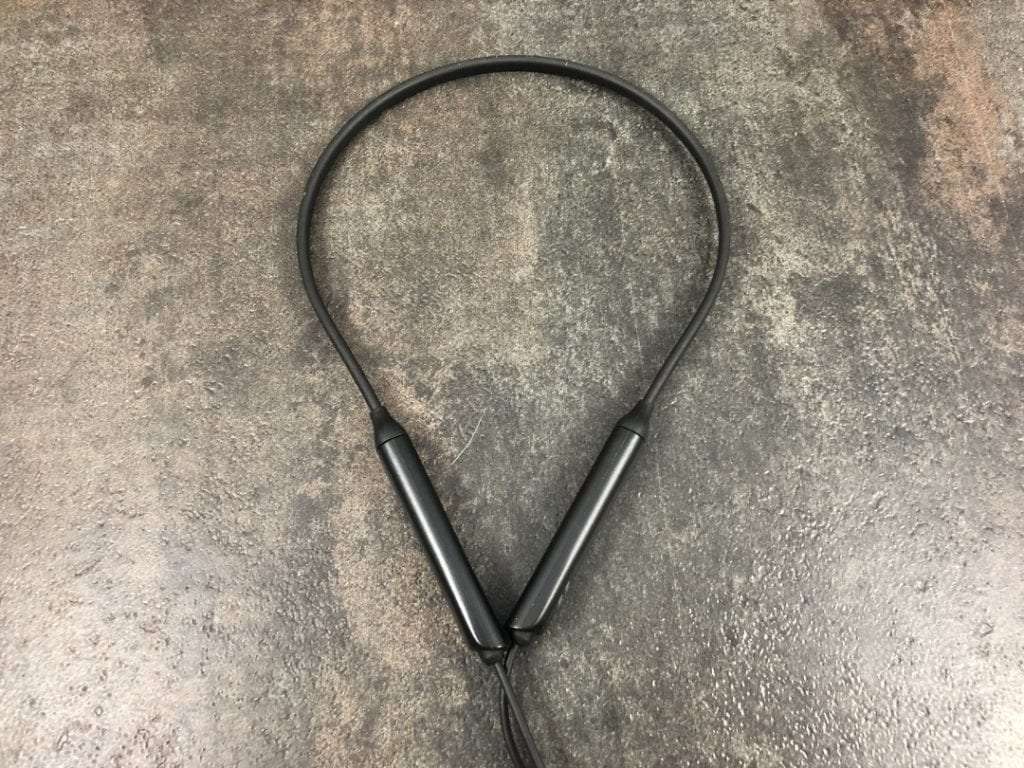 To enjoy the upper sounds, I tend to use the Far and Away and Braveheart soundtracks because it is hard to cheat the instrumentals.  I have also started using Yosi Horikawa Wandering to test the staging.  The headphones did a good job and provided some bright mids/uppers.  The strings, brass, and winds were clear and were better than expected.  With the tests completed, I navigated to Amazon Prime Unlimited and listened to “The Greatest Showman” Soundtrack, “Paradise By the Dashboard Light” by Meatloaf and Glee Cast, multiple selections from Johnny Cash, Alabama, Pentatonix and Anthem Lights.  I found that the volume up/down buttons were responsive, quickly adjusting the sound on my iPhone X and iPad Pro 10.5.”  The next/previous track buttons worked well for Amazon Prime Music, Apple Music, and Pandora.  I found Audible, Amazon Prime Video, Netflix to provide reasonable sound but found YouTube to have a significant audio/visual lag.  To be fair, this lag has been evident on multiple devices previously and was not isolated to the TaoTronics device.  The listed battery life proved to be accurate, providing about 8 hours of use with the ANC activated.  Plugging the device into my MacBook Pro, the Red LED turned to blue at about 2:15, which was on par with the listed product specifications.  I never checked the battery life of the device in ANC-Off mode because it was hard to know if you were even in the ANC-Off mode.  Additionally, I tend to charge my frequently used devices nightly.  For that reason, I often do not experience running out of power.  Lastly, I wished that there was an included carry pouch for the device.

I was pleased with the product construction, battery-life, accessories and with the overall experience.  If I had to rate the bass, it would be a 7-8/10 and the upper sounds would be an 8/10.  This device will not make it onto the audiophile radar.  To be honest, very few of the devices on the market would register on many of their ELITE scales.  I tested the device at approximately 50% volume on my iPhone X, which was pleasing and not overpowering.  The packaging needs some attention, suffering from bland coloration and package appeal.  You may get a general feel for the product, but the packaging lacks product specifications/details.  Honestly, the instruction manual should have had the charging time, battery life, Micro Electrical-Mechanic System (MEMS) microphone, details about the 13mm Electro-Dynamic speakers.  These features were found on the Amazon site.  If you are looking for a sub-$50 pair of around-the-neck earphones with ANC technology and a reasonable sound/battery life, the TaoTronics device should work well for you.  It was sweat resistant but not waterproof, which was not a deal breaker as there was no promise of waterproof status.