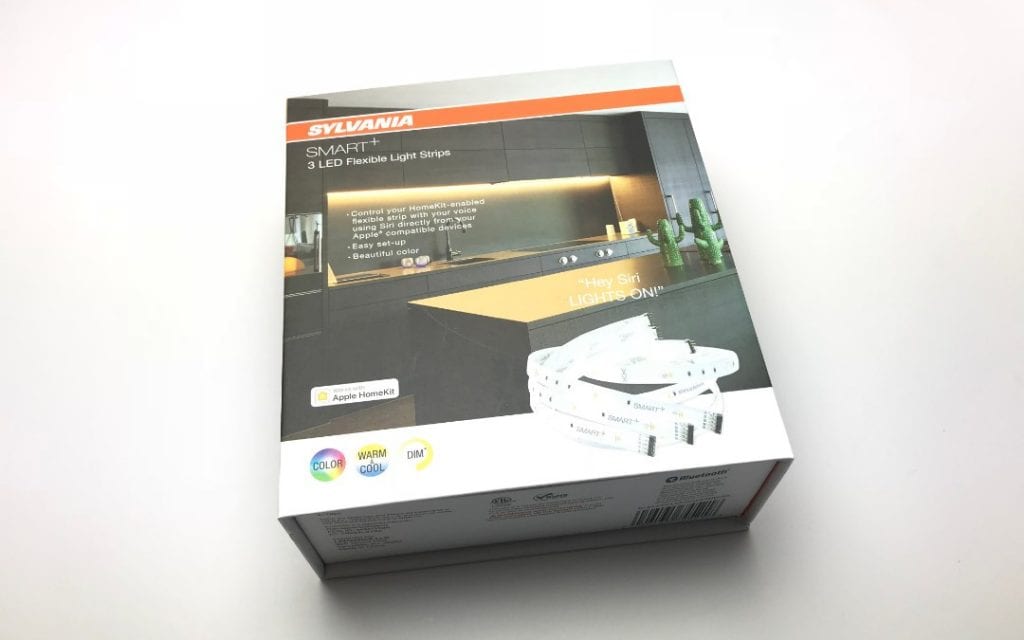 A lot can be said about the power of mood lighting. I’ve been swayed into the world of smart lighting and along with that I’ve been introduced to LED strip lights. These have been made popular by a lot of content developers who use the strips for dramatic lighting in their desk setups. You can buy non-smart light strips at pretty much any hardware store, but they will be limited in use given that they either have an on/off switch or they are controlled exclusively by an IR remote. This can get to be a hassle so why not upgrade to the world of smart LED strips? If you read my review of the Sylvania SMART+ A19 Full Color Bulb then you will know that our smart lighting journey began a few years ago with Philips Hue lighting. At the time, they were the only brand on the market that was HomeKit compatible. Today, there are several others who have joined the smart lighting club and Sylvania is one of them. In addition to the A19 smart bulb, they also have some spotlights and the SMART+ Apple HomeKit-Enabled Color Flex Strip which is the focus of this review. 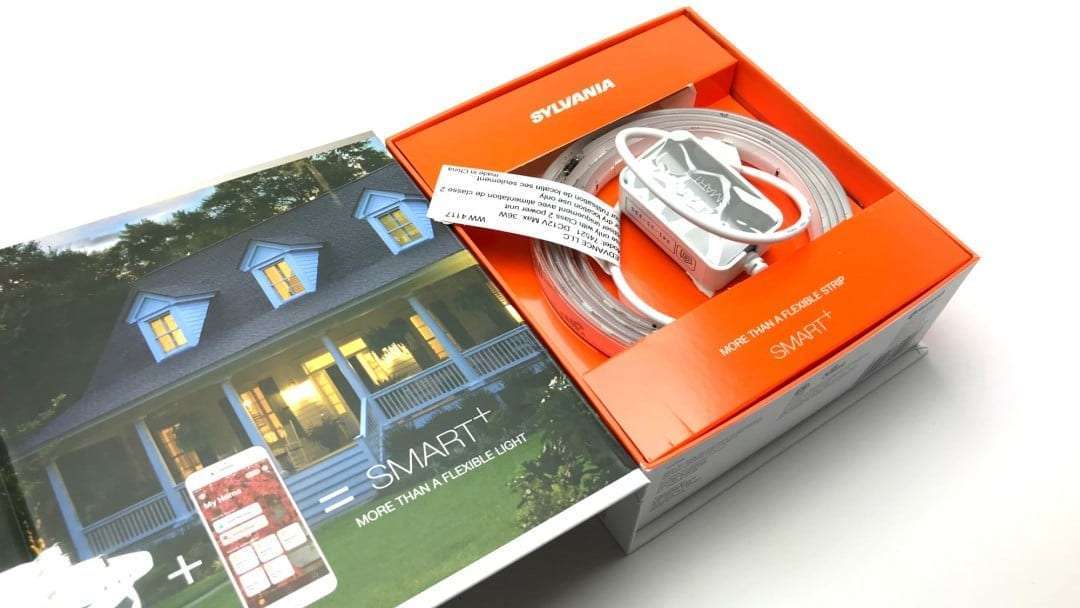 Very similar to the A19 bulb from Sylvania, the Flex Strips come in a branded box with a magnetic closure. Included in the box is the control unit, power supply, and three (3) LED flex strips. The three strips are already connected in the box, but you can disconnect them depending on where you are using them. When they are all connected the strip is approximately 6 feet long (2ft. per extension). You can add strip extensions and extend your strip to be up to 20 feet long. As a comparison, the Philips Hue strip is 6 feet long and can also be extended, but their extensions come in 40-inch lengths and you can add them up to 33 feet. It’s important to note that two other very big differences between the Philips Hue strip and the Sylvania are that the Philips Hue requires a hub — Sylvania does not — and it sends its signal through WiFi — Sylvania is Bluetooth compatible only. Also, the Philips Hue strip retails for around $90 and the Sylvania kit is currently selling for $60. 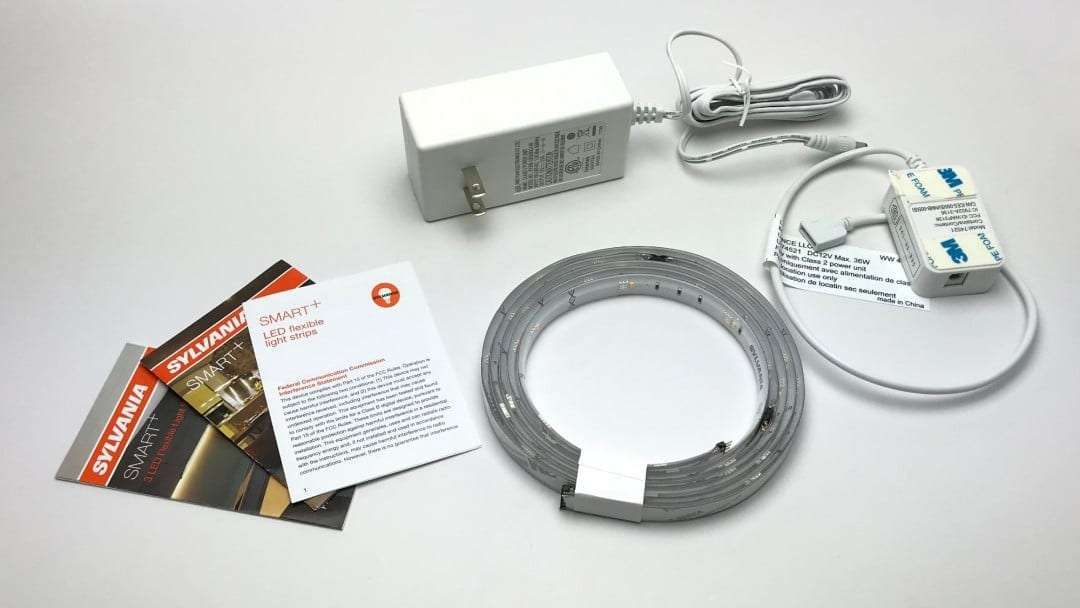 The Sylvania LED strip is HomeKit enabled and will support over 16 million colors. It also has an adjustable white color temperature ranging from 2700K to 6500K. The strip has a reported 25,000-hour lifespan with regular use and has a hassle-free set-up. Because the light strips are flexible, you can easily wrap them around corners and use the preinstalled 3M adhesive, you can adhere them to just about any surface.

Since we have a variety of other light strips in our house already, we decided to set this strip up in our daughter’s room. She loves Lilo & Stitch so we placed the Sylvania A19 bulb and this strip in her room with the names Lilo and Stitch. Pro Tip: When you are setting up devices with HomeKit it works best if you give them each unique names that you can end up calling out to your voice assistant. That way it doesn’t get confused by names like Bedroom 1, Bedroom 2, etc. We learned this the hard way. Sylvania takes the guess-work out of the set-up of their SMART+ lights by integrating them so closely with HomeKit. You don’t even have to download a Sylvania app to control them (even though one does exist). You simply open the Apple Home App on your iOS device, scan the HomeKit code on the side of the light strip’s control box and let the Home App do the work. 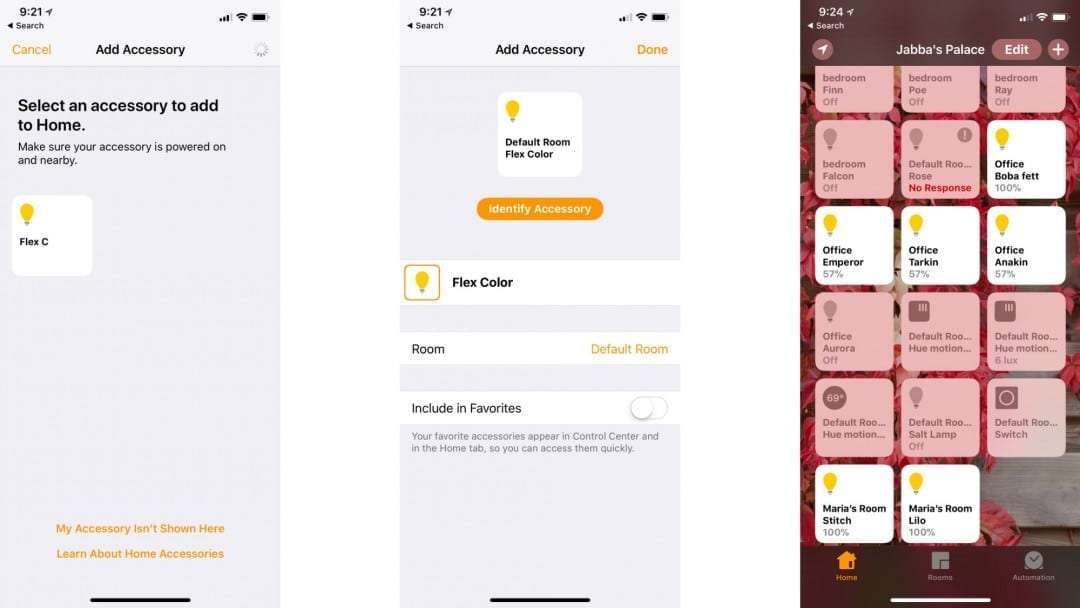 I did find that because the Sylvania strip connects via Bluetooth and not WiFi, it is a little slower to react to commands. I would say it only takes a few seconds though. In this particular case, we installed the strip around the border of our daughter’s 32-inch television. It wrapped all the way around the television but didn’t quite make it across the bottom. It still casts a nice glow on the wall behind the TV and it is a suitable night light for her. She actually has a bad habit of leaving the lights on in her room, so we love having the voice control to be able to turn them off so that we don’t disturb her at night after she’s fallen asleep. While this might not be a typical application of smart lighting, I think it’s one that all parents should consider. 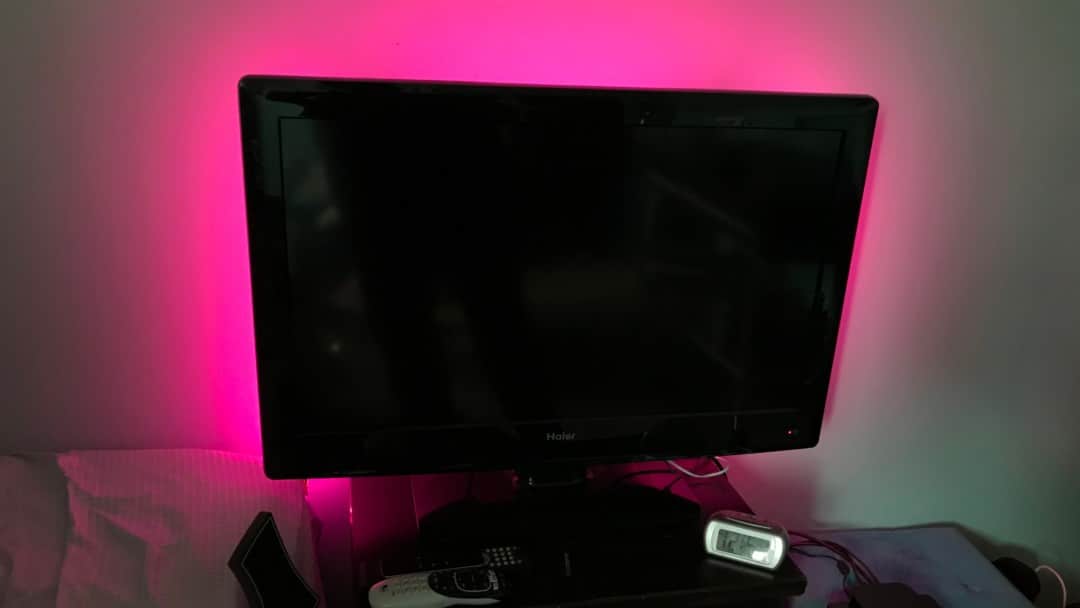 The Sylvania SMART+ Apple HomeKit-Enabled Color Flex Strip is a really nice addition to any HomeKit collection. The colors are vibrant and bright, the strip is easy to work with, and the price is very affordable. Because of the reaction timing, I’m not sure that I would want it as my only LED strip, but I really like using it for my daughter’s room. I would also use it as a second strip for accent lighting — for example, under our kitchen bar. It’s a really nice compliment for smart homes.
BUY FROM AMAZON