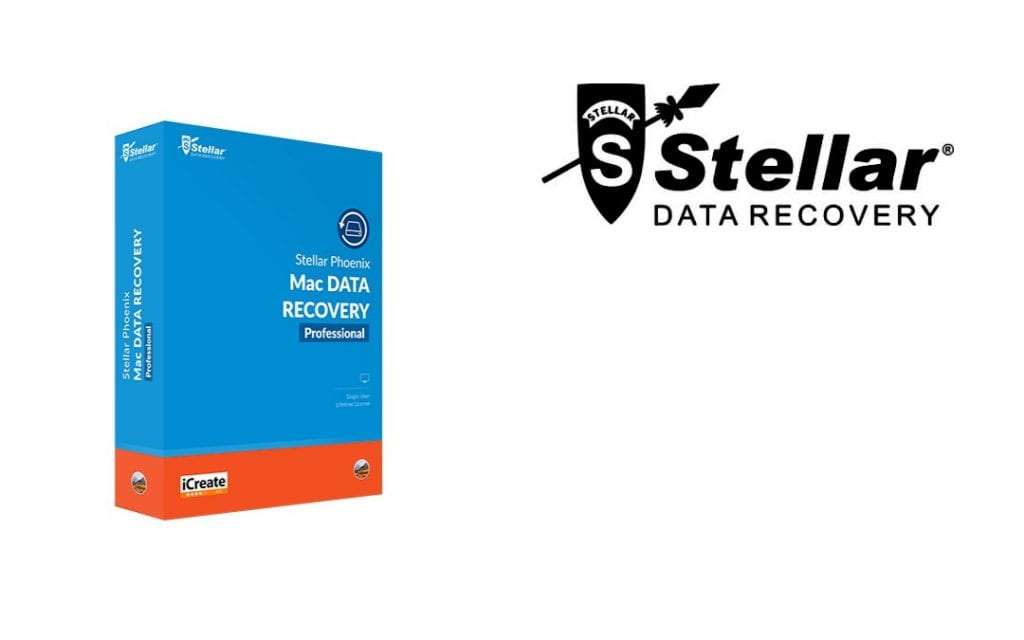 Nothing can be more frustrating than losing important digital data from your computer. I’ve been through hard drive failures before where I lost literally everything. In that situation — where the hard drive can no longer operate — there isn’t much that can be done. But, when you have an operational machine and have inadvertently deleted files or just simply lost them, there are options for recovery through various recovery applications. One such app is Stellar Phoenix Mac Data Recovery. It’s a DIY professional-level recovery tool that will help you to find your missing documents, emails, photos, and videos from any storage media based on macOS High Sierra (and older versions).

A few years ago, I was fortunate enough to test out this software, but since it’s been some time ago, I thought I would give it another look. Stellar Data Recovery provides software solutions for both Windows and Mac. This version of their Phoenix Data Recovery will work with macOS High Sierra 10.13, 10.12, 10.11, 10.10, 10.9, 10.8, 10.7 & 10.6. You must have 1GB minimum memory and at least 50MB of free hard drive space. Stellar Data Recover offers a free trial download and it’s a single user license if you decided to purchase it.

Even though I have reviewed this particular software in the past, I don’t regularly test out recovery software. Aside from the random hard drive failure, I’ve not really had an issue with losing data. That said, I do see the merit in having access to a solid piece of software that can handle data recovery. Because of the success I had with Stellar’s application in the past, I wanted to see what had changed since the last time I used it.

The first thing I noticed was that the look had completely changed from the previous version. As an example, I have included a screenshot from the older version directly followed by a screenshot of the current version of the application. 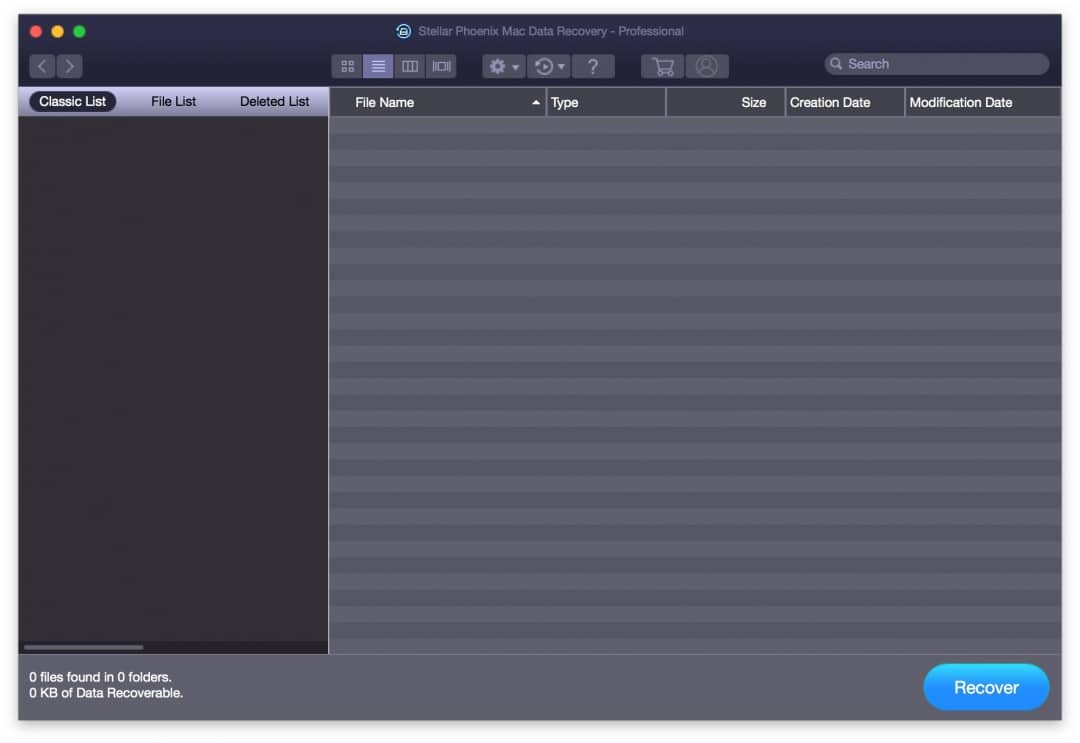 You can see by the two screenshots how incredibly different the versions look. The older version looked very similar to a Mac-centric app. That was something I liked quite a bit. It made the app intuitive and very easy to use. It’s not that the new version is hard to use per se, but it’s different enough that I had to give screens a second look.

After you get through all the permissions, you can start scanning your computer for lost files. The app will ask you to select the types of files you want to recover. You can select “Recover Everything,” or choose between Documents, Emails, Videos, Audio, or Photos. You will then select the hard drive you want to run the scan on and whether or not it should be a ‘deep’ scan. Once you click ‘Scan’ at the bottom of the window, the application will search your computer for files. 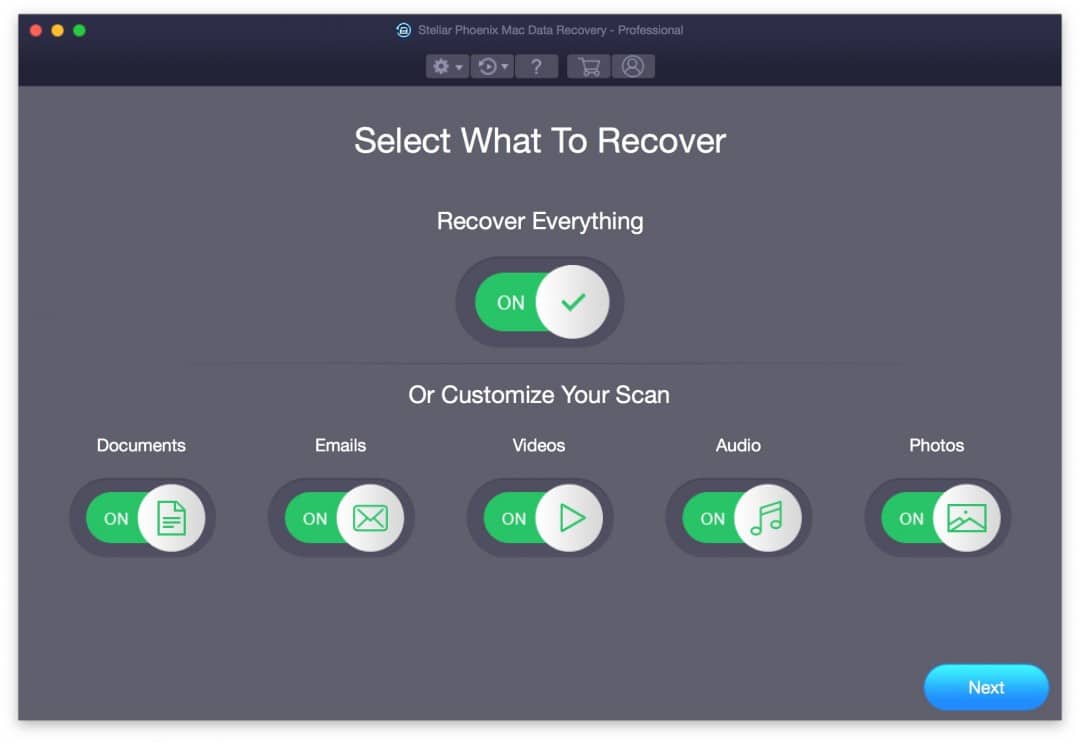 In my particular case, the scan — even the deep scan — revealed no recoverable files. I received the following prompt once the scan was complete and the list of files was empty. If the scan had found recoverable files, I would have been able to select them and click ‘Recover’ to retrieve them. As it turns out, it’s possible that the reason that no files showed up is because File Vault was enabled on my computer. The instructions don’t specify that is needed before using this software, but after discussing the issue with the developer, they confirmed that the software will not recover data if your File Vault is enabled. I would use caution in disabling File Vault if you choose to do so.

There are a couple of things I don’t like about this updated software. First of all, I don’t really like the change in format/look/design. It no longer looks like Mac software. There are certain aspects of it that do have Apple characteristics, but in general, it looks like a generic piece of software. In addition to the look of the app, the operation of it doesn’t gel quite right with macOS. For example, the full-screen button works, but you can’t do a split screen with the recovery software and other application windows. I also don’t like that the application isn’t offered in the Mac App Store.

If you feel that you need a recovery application, Stellar Phoenix Data Recovery for Mac isn’t a bad option. I know that their software has worked in the past and just because my scan didn’t return any results, that doesn’t mean it doesn’t work now. I hope that maybe they will update their look in future renderings of the application.