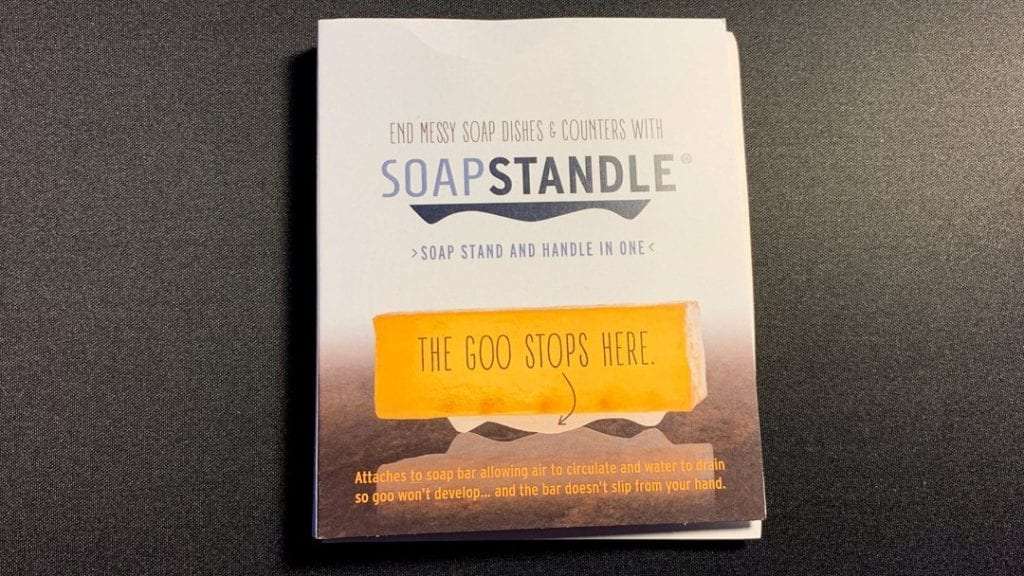 My grandmother is 85 years young and has been using bar soap her entire life. She prefers bar soap over pumps even though I have tried to get her to switch because every time you enter her bathroom, you see that mob of gooey soap that has sat in the water and over time has become a murky muck pit. So when I saw SoapStandle, I knew this could be our fix for my grandmother so she could keep using bar soap and not have the mess.

SoapStandle is not a soap dish. It’s a small, simple device that attaches to a bar of soap. It’s made out of hard plastic and is clear so that it blends in with any soap color and any bathroom decor. The concept behind SoapStandle is that it provides a platform to the bar of soap. Once the soap is elevated, air can circulate 360º around the bar and it will dry out. This prevents the “goo” from forming.

SoapStandle is created as an oval even though there are bars of soap that aren’t round. The creators of the device did this so that it would match the form of the bar of soap becomes as it degrades over time. The stand affixes to a bar of soap using ‘teeth’ that puncture one side of the bar. They are only 5mm high and designed to work with the bar of soap throughout its life. When the soap becomes a sliver, simply push it off the SoapStandle and attach a new one. While you might be thinking, “I use the soap until it’s gone. Throwing away the ‘sliver’ is a waste!” it’s important to note that you are probably ‘wasting’ approximately 20% of the bar of soap when it creates that residue on the counter or in its dish. This sliver is probably the same amount you would see go down the drain when you tirelessly wipe that goo away.

The SoapStandle comes in a minimal package wrap that cleverly houses two of the stands inside. The outside of the package states, “The stops here,” which I found to be very catchy. The name “SoapStandle” came about because it’s both a ‘stand’ and a ‘handle’ at the same time for your standard bar of soap. It will hold both flat and rounded bars and while it solves the goo problem, the SoapStandle also makes it easier to hold onto that pesky bar of soap, which is actually safer for the skin than liquid soap is.

Once you pull one of the stands out of the cardboard, you can attach it to any bar of soap in your house (or business). My main target was, of course, my grandma’s bar of Olay hand soap in the bathroom. This particular bar of soap was virtually new. She had just started using it so it still looks like a bar of soap. It is curved on the bottom, which should help with the residue problem in theory, but it really does not. To affix the SoapStandle to a bar of soap, you simply press the teeth of the SoapStandle into one side of the bar. If the bar is too hard, you can dampen it, which should loosen up the surface enough to insert the stand.

My grandmother’s curved bar of soap did accept the attachment of the SoapStandle, but there is a noticeable gap between the bar of soap and the stand where there should be none. Also, the curve is so severe on the bar that the ends still touch the bottom of the soap dish. That said, I’m very encouraged by the stand’s ability to dry out the bar. I installed the SoapStandle and took some pictures of it for this review. Then a couple of hours later, I went back to it and found that the center of the bar where the curve was at its peak was completely dry. I had dampened it so that I could place the stand and it was dry as a bone when I rechecked it. According to the SoapStandle FAQ’s on their website, the designers of the product are developing another version of the stand specifically for curved bars.

Time will tell if the SoapStandle will actually do its job properly, but I’m hopeful that we can say, “Bye-bye,” to that soapy, scummy, dingy mess forever. SoapStandle is incredibly inexpensive ($8 for the 2-pack from SoapStandle.com) and provides a simple solution to a pesky problem that plagued people for years.