When I upgraded my laptop last year, I opted for a smaller hard drive due to the cost. When I did, I had to supplement my hard drive space with flash drives, memory cards, and, one of my favorite new devices, the Armor A65 Portable Hard Drive.

The Armor drive is a 1TB hard drive that connects via USB 3.0. It has an intelligent LED indicator and does not require an external power source. So, what makes the Armor A65 special? It’s waterproof. That’s right. Waterproof. It’s honestly the first time I’ve come across a  hard drive that is resistant against the elements. In addition to that, it’s complaint with U.S. military drop-test standards. It’s basically a plug and use hard drive with no special software required.

When I first got my hands on this hard drive, I was instantly impressed. The build quality of it is outstanding and the fact that it’s waterproof makes it that much cooler. I’ve had many external hard drives, but never one that is USB 3.0. The data transfer speed is so much better than I could have anticipated. As a test, I copied over the largest application I had, which was iMovie at 2.9GB. It transferred in less than 3 minutes. The second test I ran was to copy multiple files from Dropbox to the Armor drive. This was a bit over 2GB in total file size. And again, the data transfer speed was impressive. The files copied from Dropbox to the drive in about 3 minutes.

The third test I did was to try to copy a VERY large file (over 30GB in size) from an SD card to the hard drive. This file used to live on my MBP’s hard drive, but I transferred it to free up some space a few weeks ago. I started the transfer and let it go for a few minutes, but because of the sheer volume of the file, I ultimately stopped the transfer as I didn’t have the time to allow my computer to sit for hours. I will say that the transfer speed did seem to be faster than when I copied it from my computer to the SD card the first time.

In short, I have been very impressed with the speed and style of this hard drive. It retails for around $80 and in my opinion, is well worth it. 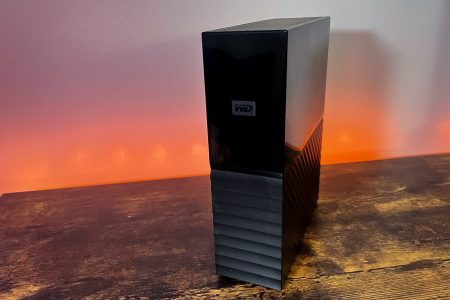