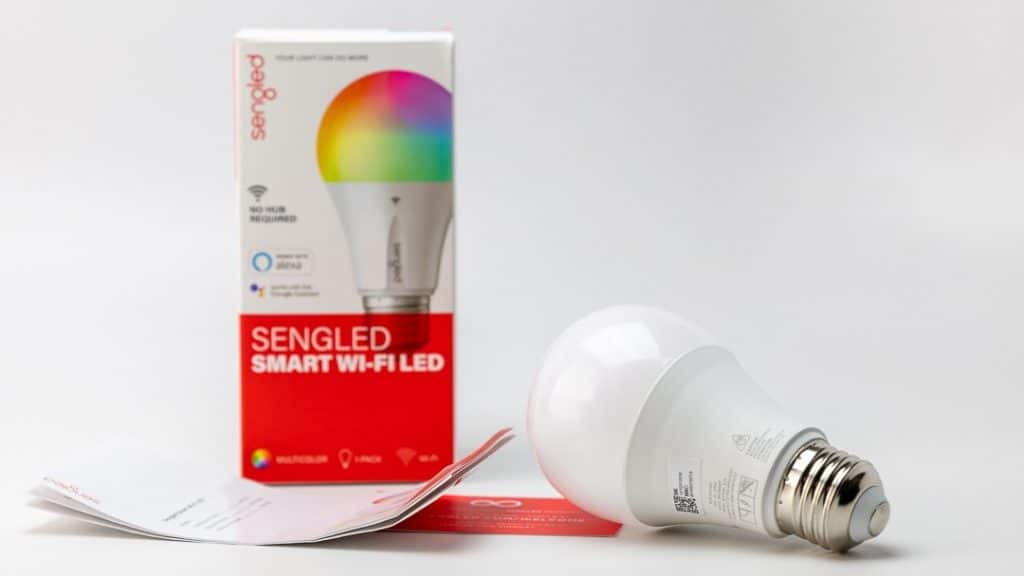 Smart lighting can really enhance how you live at home. I’ve had smart lighting (of some form) in my home now for nearly a decade and I really can’t imagine having the ability to turn lights on and off from my phone or simply by calling out, “Hey, Siri. Turn off all the lights,” when it’s time for bed. Since I started added smart lights to my home, I have noticed that more and more companies have joined the smart home game. One of the most recent is Sengled. They are a company that lives with the philosophy that “the light bulb can be continuously reinvented to make life better.” With that in mind, they announced the release of a Multicolor A19 Smart WiFi LED bulb as well as a Multicolor Smart LED Light Strip. Both are very nice products that offer a smart lighting option with a budget-friendly price.

Sengled has a couple of different Smart Lights available. One of the A19 bulbs (the one featured in this review) connects via WiFi, while the other smart lights require the addition of the Sengled Smart Hub. The hub is designed to connect and control all Sengled Smart devices (bulbs and plugs) via the mobile app (Android or iOS). A single hub can support up to 64 devices, which means that you could likely connect to your entire home through a single hub. Sengled’s system is compatible with Google Home and Amazon Alexa, but not with Apple HomeKit. Since most of our devices are connected through HomeKit, Sengled’s devices ended up not being visible, but our current smart home system. We were able to connect, view, and control the Smart Bulb and LED Strip using the app, but I wasn’t a big fan of having to have a separate app for their control.

One of the downsides to the Sengled Smart Hub is that it’s not compatible with a 5 GHz WiFi network. It can only be used with a 2.4 GHz network AND it isn’t 100% compatible with all routers/modems. While I was attempting to set up the hub, I ran into a few connection issues. At first, it wouldn’t boot to the ‘ready’ stage of the set-up. That stage is indicated by the illumination of the power and network lights on the top of the device. After several attempts/resets, the power light was on and the network light wasn’t. Somehow (even though I didn’t do anything differently) the network l light finally came on and I was able to finish the set-up through the app, which ended up being a fairly simple process.

LED Strips have the ability to totally transform a space. They have the power to create mood and provide soft, colorful light to help relax a space that may have been invaded by harsh white light before. This LED strip ended up transforming my stepdaughter’s room. A few months ago, she remodeled it (painted and rearranged her furniture) and she really wanted to add some smart lighting after seeing fun examples of it online. We finally got the chance with this multicolor light strip from Sengled.

As I mentioned above, this device requires a hub in order to have control over it. The product description actually states, “connect to a compatible hub (Sengled Smart Hub or Alexa devices with a built-in hub).” Since we didn’t have an Alexa device with built-in hub, we connected it to the Sengled Smart Hub. Sengled made this process incredibly painless. They include a QR Code on the back of the box that you scan while you’re in the Sengled Home app. This helps the hub and app find that device’s signal and connects it to the Sengled system. At that point, you name it, assign it to a room and start using the strip.

The LED Multicolor Light Strip is 2 meters in length or 6.5 feet. You can create scenes and schedules for it as well as tune in over 16 million available colors. Users do have the option of adding more length to a strip with a 1-meter light strip extension.

The one complaint I have about the strip is how the actual strip connects to the power supply cable. The strip has connector prongs that stick out and are meant to insert into the end of the power cable. The problem is that the place where you insert the connector into the cable is recessed in plastic and it’s hard to know if you have it lined up exactly right. I could see someone who isn’t taking their time just shove the strip connectors into the cable and ruin the connector prongs by using too much force.

This smart light bulb connects directly to a user’s home WiFi network — as long as it’s 2.4 GHz. It does not require a hub for operation. It’s compatible with both Google Assistant and Alexa and can be programmed to work with either. As is the case with the LED Strip, you can also program scenes and create schedules for this A19 bulb, too.

Because we didn’t want to separate the system, this light bulb also made its way into my stepdaughter’s room. When I installed the lights in her room, she was doing something else in our house and was surprised when she walked in her room. She said, “OOH!” It was excited to hear that kind of expression from her.

The Sengled Smart Lights are a really nice option for starting or even supplementing smart lights you might already have in your home. I do wish they were compatible with Apple HomeKit so that we could manage them along with the rest of our smart home devices, but I can give that up. The system is pretty easy to set-up and the lighting is actually quite stunning. Given that the cost of these lights is very reasonable, I think someone who is being budget-conscious would really appreciate them.