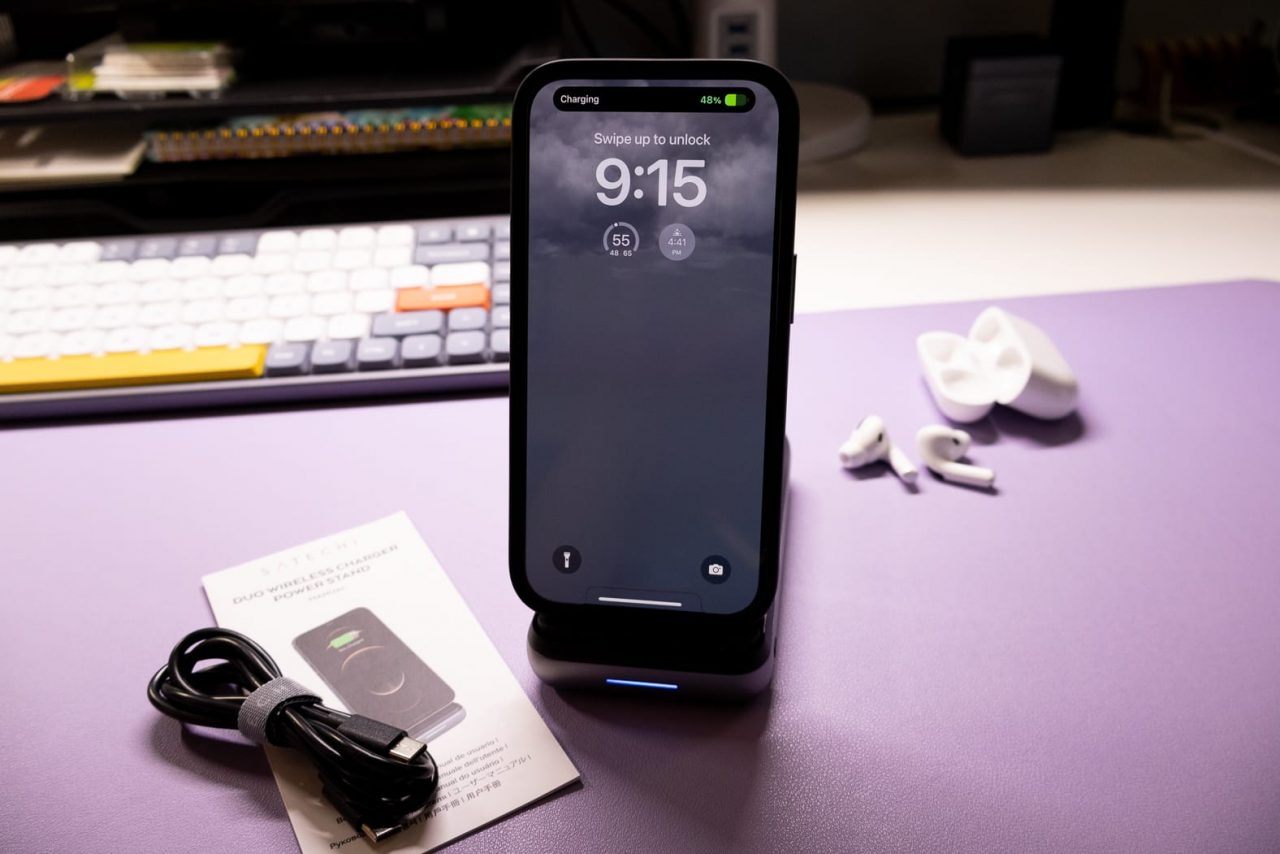 The Duo Wireless Charger Power Stand is a functional, powerful option for charging multiple devices -- even while on the go. The design is remarkable -- it looks good and is very functional -- and it's easy to use. The ratings for ease of use and price are marked down due to the operation of the device differing from the instructions and the price point being high -- even though it's comparable to other chargers.

A sleek, powerful wireless charger for home or office use.

Even though I have numerous (almost countless) options for charging my devices, I always struggle with what charger I should take with me when I travel or commute. In the past, I’ve taken power strips and multiple charging docks but I’ve really tried to pack light during recent trips. I really love charging devices that can provide power to multiple devices at once so the Duo Wireless Charger Power Stand from Satechi caught my eye when it was announced in December.

The Duo Wireless Charger Power Stand is a charging dock that features a modern foldable design paired with two wireless charging surfaces and a USB-C input/output charging port. While the stand can be used traditionally as a wall-powered charging dock, it is built on a 10,000 mAh power bank. This makes it a very useful charger for remote workers or travelers alike.

The stand has a sleek, space gray aluminum finish and folds up to be incredibly compact. It takes up very little space on a desktop or in a bag and supports wireless charging for most modern smartphone models. The flip-out stand for the phone is meant to provide a comfortable angle for watching videos or participating in video conferences.

The Duo Power Stand is a smart charger and will cut off power to connected devices to ensure they are receiving a safe charge.

For the full list of frequently asked questions on this product, visit satechi.net.

The Duo Wireless Charger Power Stand has a list price of $99.99 and is available on satechi.net.

The Duo Wireless Charger Power Stand comes packaged in a simple Satechi-branded box. There is an image of the product in use on the front of the box with some basic details included. The back of the box features a sequence of images that show the different stages of the charging stand. I found this to be a nice addition to the retail package because it showcases the main features of the product without the user needing to remove it from the box.

Upon opening the box, I found the charging stand, its user manual, and a USB-C charging cable. One of the reasons I like Satechi products so much is because of the little touches and while this might seem like such a little thing, I really like that their cables come wrapped in a velcro Satechi cable wrap. It tidies up the appearance so much and makes it easier to store the cables when they aren’t in use.

A power adapter is not included with this charger. This would normally annoy me because many chargers require a certain power adapter wattage in order to reach their target charging power, but since the Power Stand doesn’t make that claim, it is fine that a wall adapter was not included.

I love the size/shape of the stand. It is only slightly thicker than my iPhone 14 Pro with a case on it and it’s a bit shorter than my phone. This makes it very easy to transport. It only weighs 10.1 ounces (286 grams) which is only about 80 grams more than the iPhone 14 Pro itself.

Out of the box, the stand was charged at approximately 50% capacity. The instructions suggest that it’s best to charge the device to 100% before using it the first time but I opted to run my charging tests on the stand with the power it had out of the box. I opened up the stand and set my phone on it. To my surprise, it automatically started charging.

The instructions state that users should have to press the power button to activate the charging function, but I found that with the iPhone and the AirPods, the stand would automatically start charging both devices — even from a powered-off state. I thought maybe it was just an Apple product thing so I pulled out a Google Pixel 7 Pro and it worked with that phone, too. I can’t explain it but I would advise users that if charging doesn’t start automatically, they should press the power button to ensure charging is active on the device.

I ended up charging my AirPods Pro (Gen 1) and iPhone 14 Pro for approximately 40 minutes. The iPhone had a 50% battery level and the AirPods case was at 0%. This meant that the battery level didn’t even register on the phone. The chart below shows the battery charging progress for both devices. In the end, the iPhone had a charging rate of 0.4% per minute and the AirPods had a collective average charging rate of 0.86% per minute.

The Duo Power Stand did get warm after charging both devices for that amount of time, but it wasn’t hot to the touch. I used an infrared thermometer to measure the heat collection at various places on the stand and got the following readings. In my opinion, this is pretty standard for wireless chargers and not anything to be concerned about.

What Differentiates the Duo Wireless Charger Power Stand from other chargers?

The most unique feature of this charger — and what makes it stand out from its competitors — is its ability to charge multiple devices at once wirelessly while acting as a stand.

I’ve used a lot of wireless power banks, but very few transform into a stand and I don’t believe I’ve used any that act as a stand AND can charge multiple devices. I will say that the name feels a little misleading to me because even though you can only charge two devices wirelessly, users can charge up to three devices simultaneously.

Satechi has crafted a truly remarkable charging device with the Duo Wireless Charger Power Stand. This sleek and functional charger has the ability to be used in a stationary fashion or portably, making it incredibly versatile. I have always been a fan of multi-purpose devices, and this one is no exception. The power stand offers the perfect combination of convenience and functionality, making it an invaluable addition to any home or office. With its slim and sleek design, it fits in perfectly with my lifestyle, and I find myself using it more and more every day.