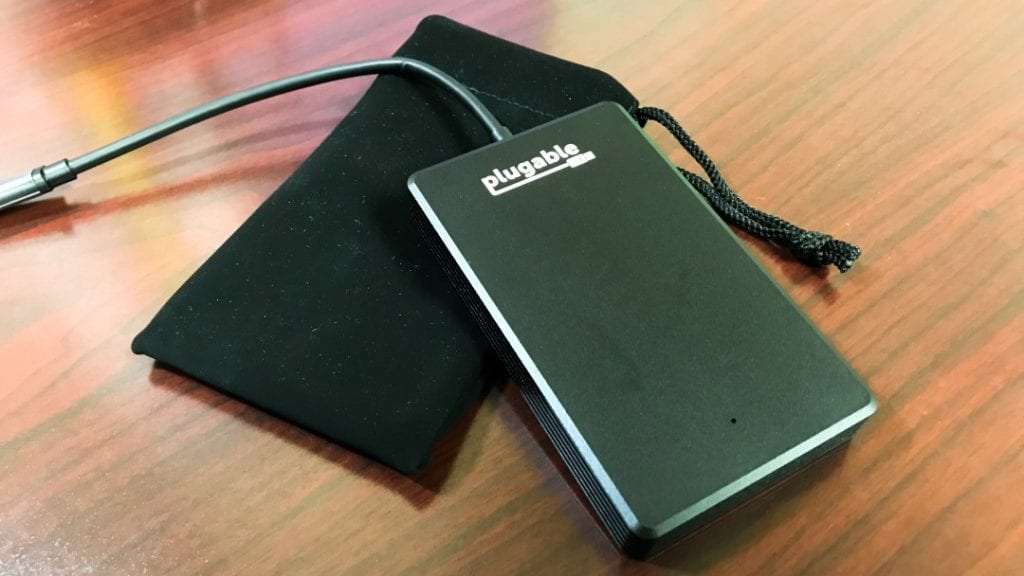 External hard drives come in all shapes and sizes these days. One of the more annoying aspects of them is the fact that you have to carry a separate cable with them in order to connect to your computer. Fortunately, technology accessory company, Plugable has developed a wonderful portable SSDanwith an integrated Thunderbolt 3 cable and I’ve been able to test it out.

The Plugable Thunderbolt 3 480GB NVMe SSD is a durable, fast portable hard drive that is the perfect companion for MacBook Pro users. The drive has a capacity of 480GB and offers speeds up to 2400 MB/s read and 1200 MB/s write (40 GB/s) and it does not require outside power to operate. It’s designed for blazing fast external storage for gamers or even as a secondary OS boot drive. The SSD includes Intel Thunderbolt 3 technology for ultra-fast transfer speeds and the NVMe technology allows media to interface directly with your CPU via PCI Express for better performance, lower latency, and reduced CPU usage. Plugable estimates that the Thunderbolt 3 SSD can end up being faster than most internal drives and roughly 5X faster than traditional SATA III solid state drives connected with USB 3.1 Gen 2. The hard drive is compatible with Thunderbolt 3 systems; USB-C systems without Thunderbolt 3 and USB-A (USB 3.0/2.0) systems are not supported. 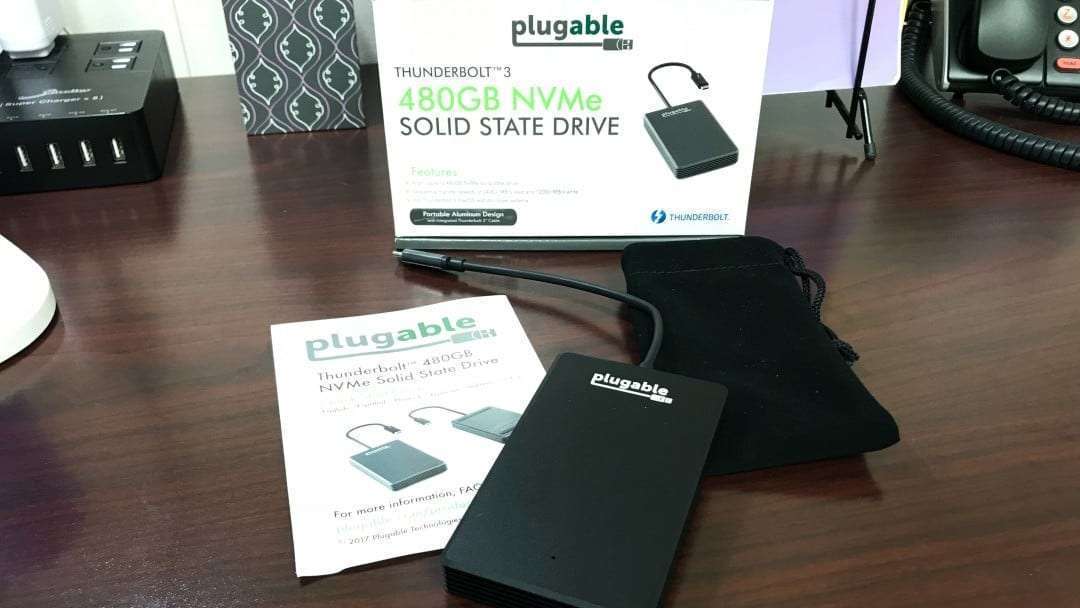 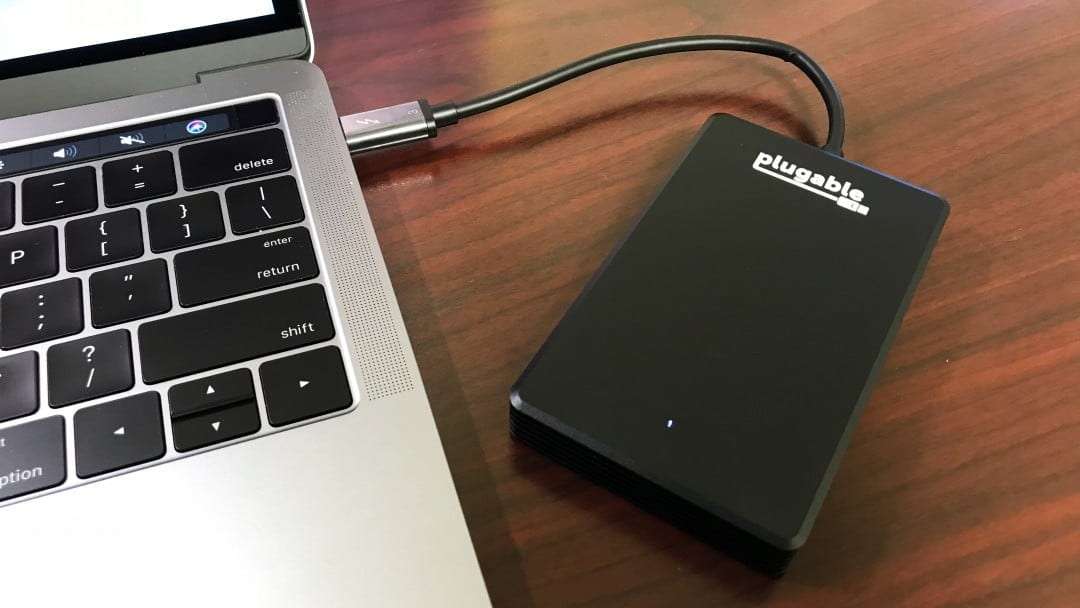 Even before I opened the box, I was really excited to use the Plugable SSD because of its integrated cable and TB3 (Thunderbolt 3) capabilities. One of my greatest frustrations with external hard drives is keeping up with their native cable. So, the attached TB3 cable helps to relieve from stress for me.

The drive arrived in a nice, well-labeled box. The name of the product along with an image of it was on the front with some basic specs listed on the back. One of the things they point out on the box is that USB-C systems without Thunderbolt 3 and USB-A systems are not supported. This is an important thing to highlight because many people think of TB3 and USB-C as interchangeable. Even though they are the same size, the two connection types transfer data differently. In most cases, you can use the USB-C cables and TB3 cables in both port types, but since this TB3 cable is hardwired into the drive, it’s specifically using TB3 technology and not cross-compatible.

When you open the box, you will find a quick start guide and the drive in a convenient soft felt carrying pouch. This was something else I was grateful for because the pouch helps to keep the cable safe. You do have to be careful about bending the cable in odd ways. The Plugable SSD weighs quite a bit more than other portable SSDs I’ve used. It has an aluminum case and is smaller than my iPhone 7 but it does feel heavier than most SSDs out there. 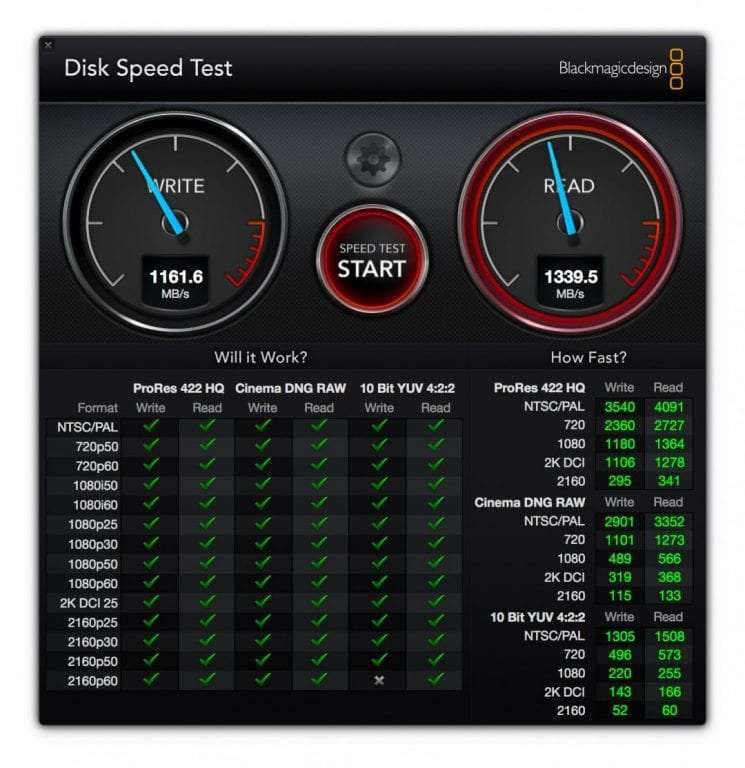 When I first plugged it into my MacBook Pro (2016, 13-inch), the drive appeared as “TBT3_SSD” on my desktop. After the drive mounted to my computer, I ran a quick system report on it. I found that it is natively formatted as ExFAT for cross-system compatibility. It is easily reformatted on a Mac using the Disk Utility function. The longer I used the drive, the more I noticed that it was getting warm. It was never ‘hot’ to the touch, but definitely warm. I ran a few speed tests on the drive to see if I could get the same ‘advertised’ speed from the specs on Plugable’s website.

The first two tests were done using utility applications – Blackmagic Disk Speed Test and AJA System Test Lite. The Blackmagic test showed an impressive 1161.6 MB/s Write and 1339 MB/s Read speed with a 5GB stress test, which is actually above the ‘average’ that Plugable outlines in the device’s specs. The AJA test was a little more specific. The app is designed to allow those in the digital media – specifically video production – to test the performance of a drive with real-world speed tests. With it, users can specify resolutions, bit depths, compression types, and more to emulate their specific digital video workflow to find out a particular storage solution will work for their needs. The Blackmagic test shows a similar result but I really like how AJA breaks it down in terms of specifics. With that in mind, I ran the test based on 4K video files and got a test reading of 1091 MB/s Write and 1343 MB/s Read. Finally, I copied some files over to the SSD and timed their transfer with a stopwatch. During this test, the files (12.6GB in total) transferred in a little over a minute (63 seconds). 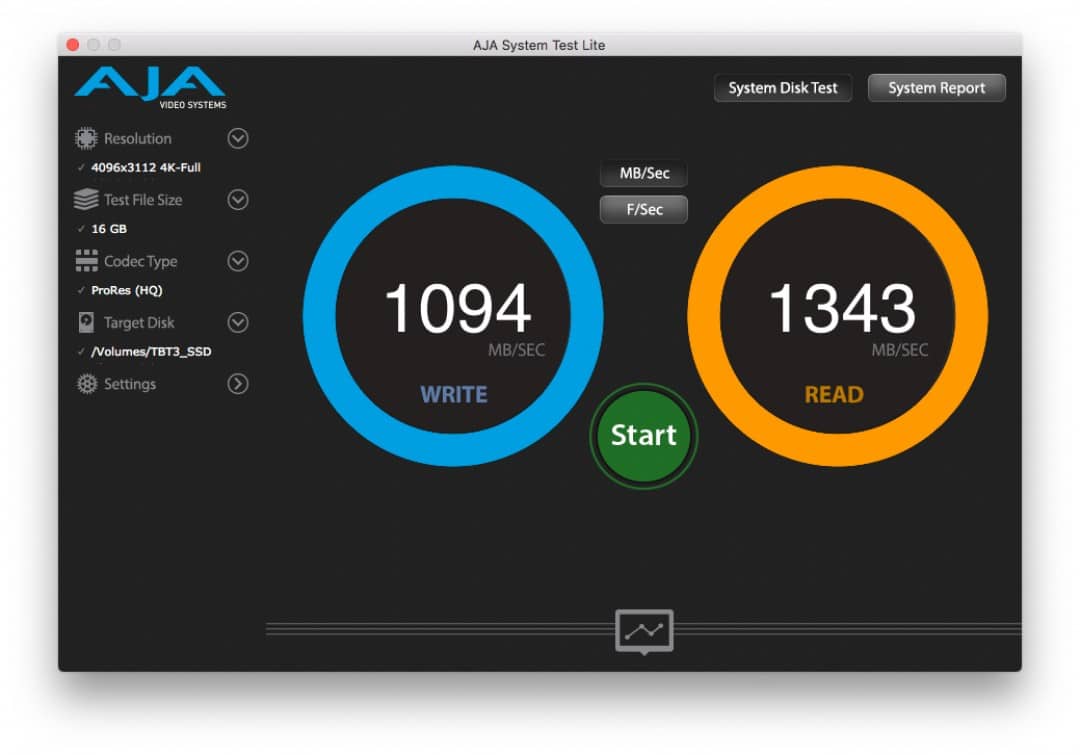 The Thunderbolt 3 408GB NVMe SSD is a very fast external hard drive. It is powerful enough to handle any task you throw at it. It does collect some heat the longer it is connected to a computer. The price of the Plugable drive is quite a bit higher than other external SSDs. For example, the 500GB Extreme Portable SSD from SanDisk retails for under $130. The big difference is that it does not have Thunderbolt 3 transfer capabilities. I like that the Plugable drive has the built-in cable – to me, that is the biggest perk of this device. I can recommend this drive based on its high storage capacity and ultra-fast transfer speeds.