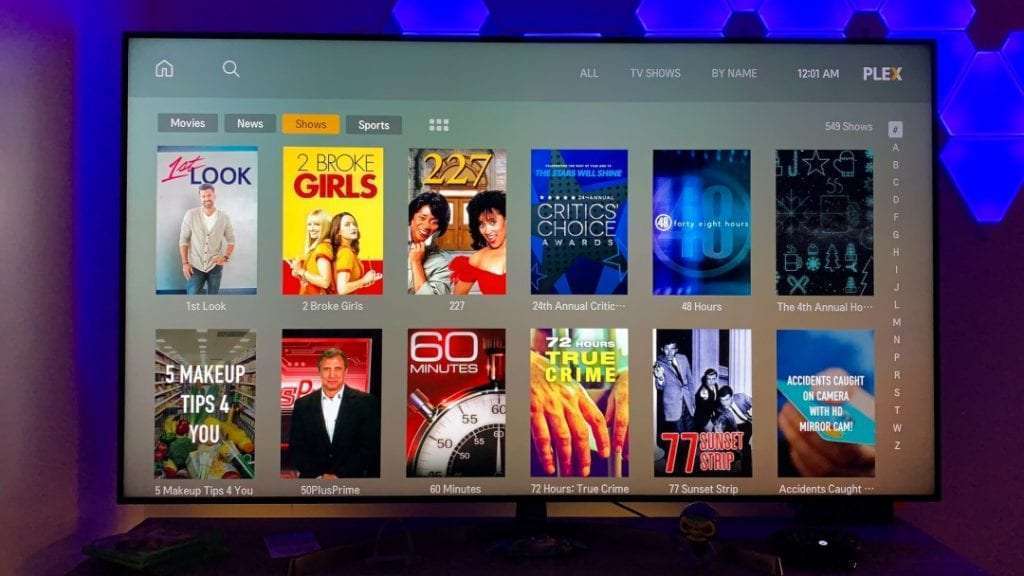 A good way to view TV programming without the hassle (or expense) of cable.

One of my favorite things to do it relax in the evening with my family while we watch TV. The thing about that activity that isn’t relaxing is dealing with missed episodes of programs we watch and annoying commercials in the middle of the shows. That’s why I was so happy to have a satellite system with a DVR included for many, many years. I love having the ability to fast forward through commercials to get back to my shows. Within the past few months we’ve discovered just how costly our satellite system is though and even though we made switch to a new provider, we are still considering alternatives to our current entertainment decision. ‘Cutting the cord’ is a viable option for the most part except that we would lose our DVR option — unless we decided to go with the Plex Live TV and DVR option.

Plex, a company known for providing a superior interface for personal media, has branched out into providing an option for users to experience live TV the same way they would their saved videos. Plex Live TV supports channels from major US and Canadian networks (80% of all major networks) with more than 100 local channels available for viewing. Plex Live TV and DVR works very similarly to the standard Plex Media Server,  but some additional hardware is required for operation. You will need an HD antenna, a tuning box, and a Plex server. You will also need a Plex Pass, which you can get for as little as $5 per month, $40 per year, or $120 for a lifetime pass. If you plan on using Plex frequently, I would recommend going ahead and investing in the lifetime pass.

I remember several years back, some of my friends built their own DVR systems so they wouldn’t have to pay the exorbitant surcharge that cable companies were charging in the early 2000s. Today, charges are a bit more standardized, but it’s much nicer to have more control over your own programming. Plex’s system makes this a lot easier than building your own DVR box, but there are still some loops to get through before you can use your system. 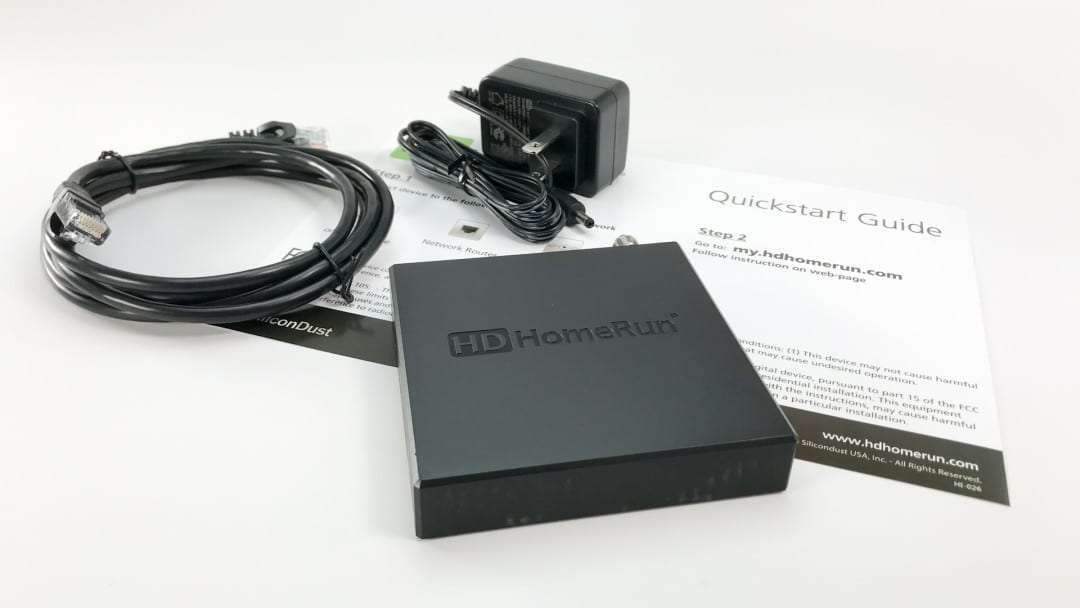 As I mentioned above, there are several pieces to this system that you have to have in place before you can start cutting the cord to your cable or satellite company. First of all, I want to note that the signal you are pulling in from outside your Plex media server is a ‘over the air’ signal. This means that for the most part, you will only be able to access local broadcast channels — not cable channels. For my area, this means I can potentially access the following 30+ channels:

Even though Plex shows these channels as being available in my area, that doesn’t mean I can access all of them at my house. In fact, I can typically only access about 10 of these. It really depends on the OTA (over-the-air) signal that the station pushes out and your physical location in your town. If there are a lot of trees near your house or a lot of houses in your neighborhood, all of these things can interfere with an antenna signal and when it comes down to it, that’s what you are actually reading and able to record on your DVR. 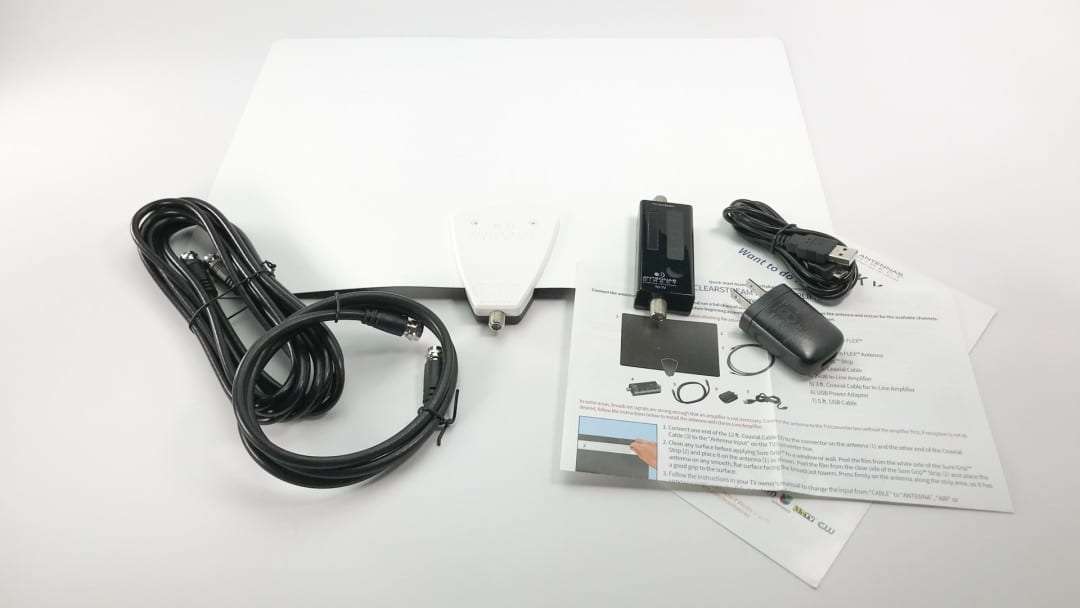 So, now that I’ve made that point, I want to outline what equipment I was using along with the set-up steps.

First, you will want to get your antenna and tuning box connected and running on your network before you attempt to set-up the Plex DVR through the Plex Web App. The antenna is the easiest step to start with. First you connect the coaxial cable that is included with the antenna into the antenna and then into the amplifier for better signal reception. Then you plug a coaxial cable into the other end of the amplifier and then into the HDHomeRun. The HDHomeRun tuner is a network-based tuner so it needs to be able to be plugged into your network router. Finally, you power it on. 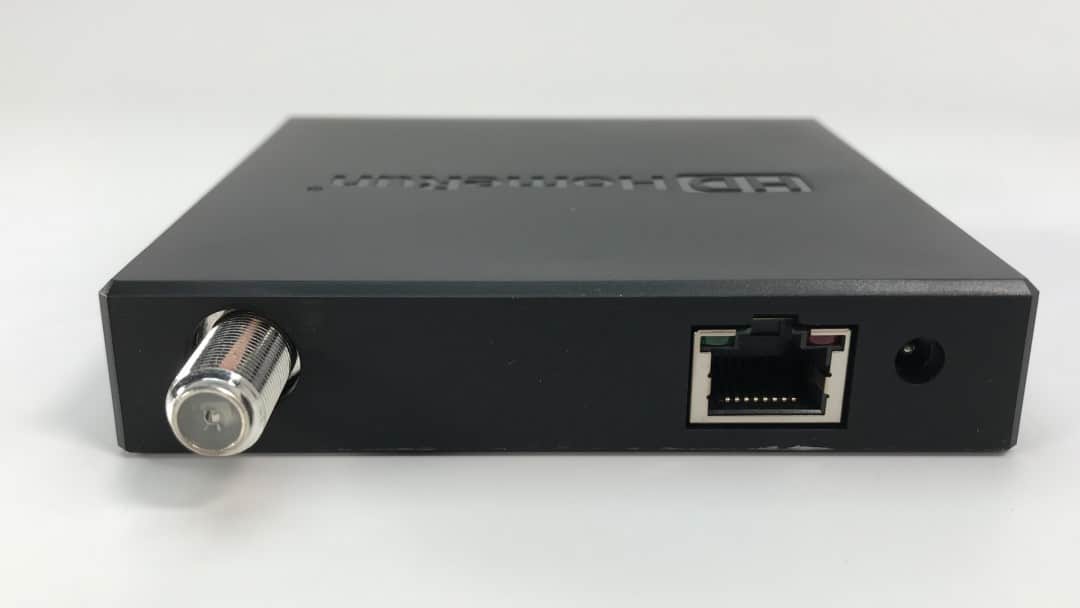 At this point, you should be able to start with setting up the Plex DVR through the Plex Web App. You’ll click on Settings > Live TV & DVR. You’ll end up seeing compatible tuners on your network. You’ll select yours and then click Continue. You’ll be asked to enter your zip code so that Plex pulls in the providers for your area. Once it pulls in your channel listing, you can select what channels you actually want to view. Next, Plex will initialize your guide and process the DVR and within a few minutes, it’s ready to go.

At this point, you should be able to see ‘Recording Schedule’ and ‘Program Guide’ under the Live section in your Plex settings menu. You’ll be shown programs in a poster-style view of the shows that are available right now. 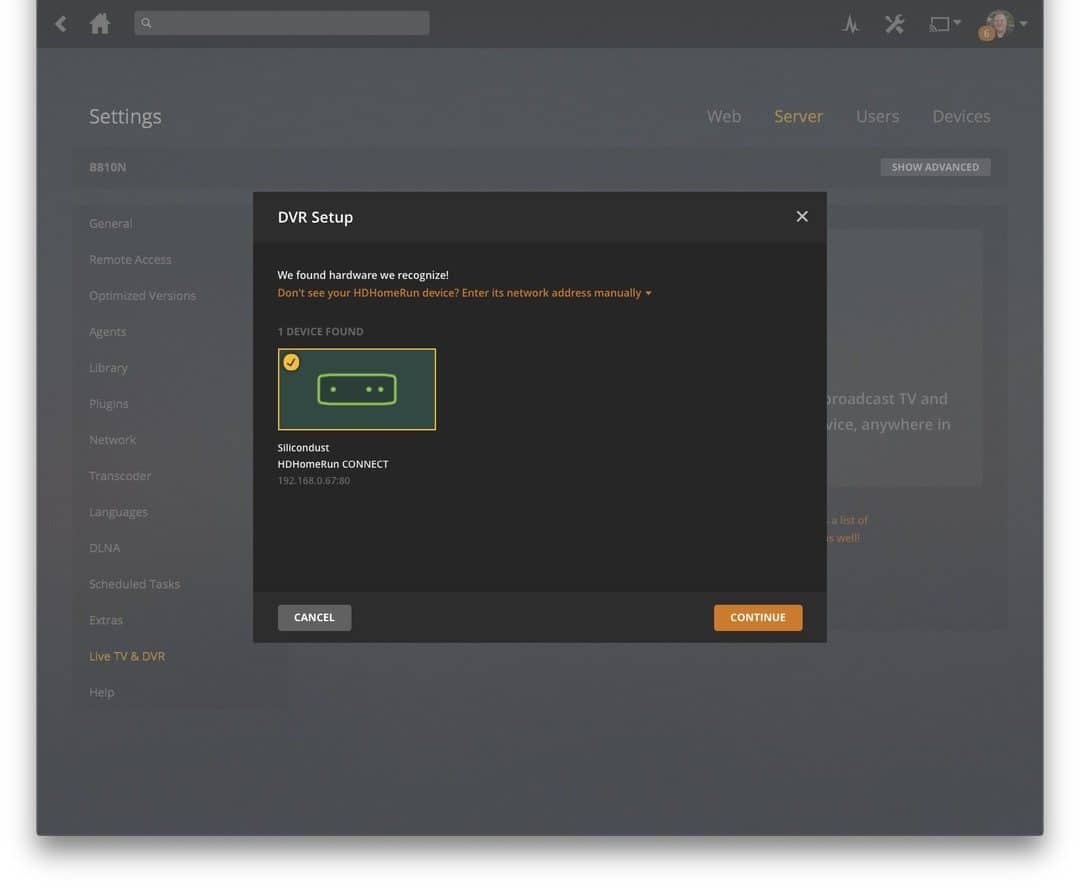 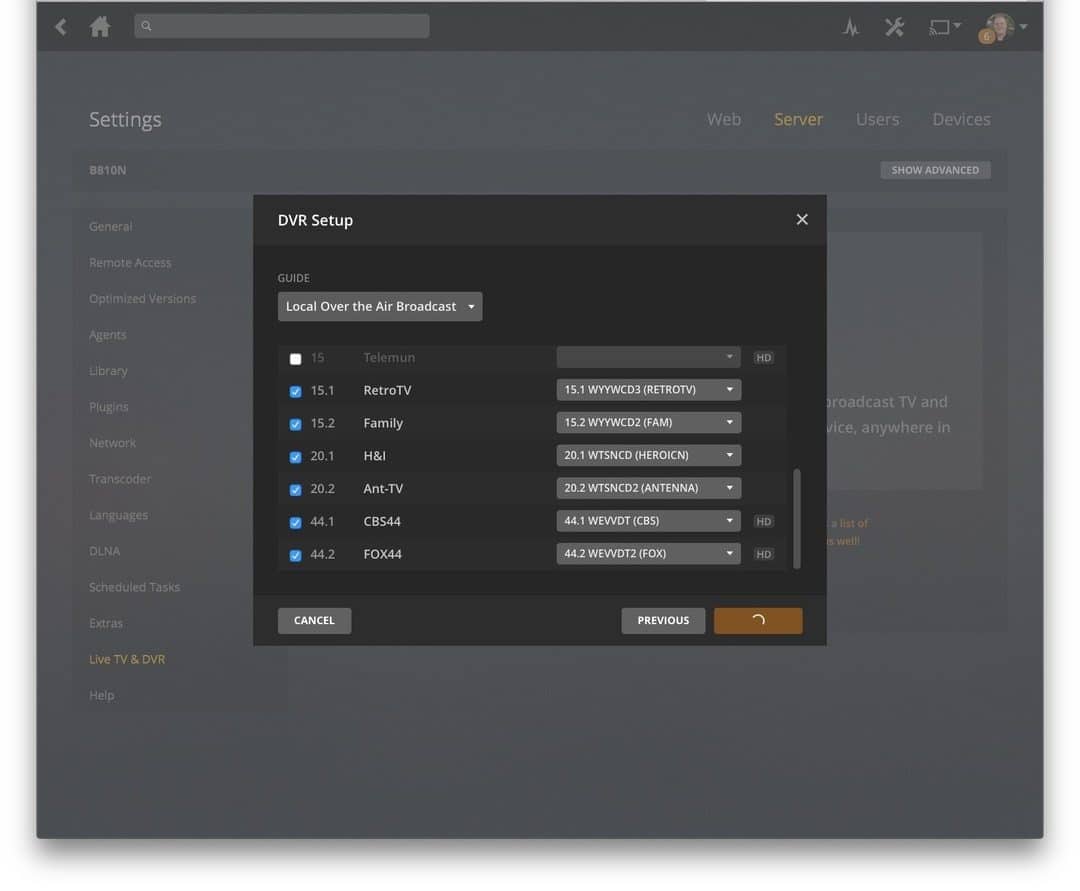 During this process, I learned a few very important things. First, I originally had my Plex Media Server set-up on a Drobo B810n. While that worked just fine for storing media and playing it back throughout the house on my Apple TVs, it wasn’t quite suitable enough for live TV processing. So, I had a few ups and downs while trying to get the Plex DVR set-up. Once I realized that part of my problem was the active processing issue on the Drobo, I switched over to a QNAP TVS-951X, which is designed for 4K media playback and online transcoding. Don’t get me wrong – I love my Drobo. It’s great at a lot of things, but when it came to live TV media processing, the QNAP system just handled it better. My point here is that you will need to check out the capabilities of your Plex Media Server system before you attempt to embark on this DVR journey. You don’t want to get halfway set-up and realize that your storage device/computer can’t handle the media processing. 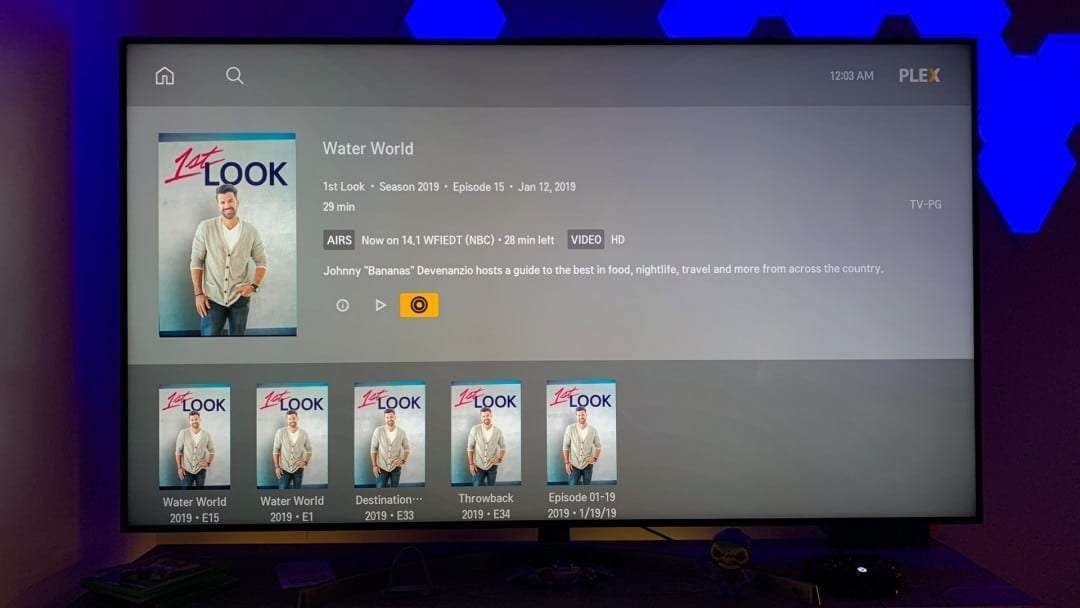 While this system is a viable option for some tech-savvy people eager to get away from cable systems, the Plex Live TV & DVR is not for everyone. Set-up can get complicated — depending on your network speeds, options, and set-up — and the equipment can be a little pricey for starting out if you don’t already have a Plex server in place. That said, the system does work and it works well. If you already have a Plex Media Server in place and want to up your game by cutting your cable cord, then Plex Live TV might be for you.