Today I got up & went online to check my Facebook, Twitter and email as per usual. I had just finished up posting some random shit online when a notice came on my desktop screen saying ”You have email” . Upon seeing this i presumed ”Oh, theres another boring email from a stupid company or something like that” When i checked it was actually an email from PlayStation about the current Hack Problems that the company had been having in the past few weeks.

The email started of by saying :

”We have discovered that between April 17 and April 19, 2011, certain PlayStation Network and Qriocity service user account information was compromised in connection with an illegal and unauthorized intrusion into our network”

Then the email went further and stated that :

”Although we are still investigating the details of this incident, we believe that an unauthorized person has obtained the following information that you provided: name, address (city, state/province, zip or postal code), country, email address, birthdate, PlayStation Network/Qriocity password and login, and handle/PSN online ID. It is also possible that your profile data, including purchase history and billing address (city, state, zip), and your PlayStation Network/Qriocity password security answers may have been obtained. If you have authorized a sub-account for your dependent, the same data with respect to your dependent may have been obtained. While there is no evidence that credit card data was taken at this time, we cannot rule out the possibility”

Now reading this email i began to get really pissed of at the fact that Sony doesn’t actually apologize  for any of its failed attempts in protecting your sensitive information & they go further to state that :

”To protect against possible identity theft or other financial loss, we encourage you to remain vigilant to review your account statements and to monitor your credit or similar types of reports”.

Now why the fuck should i have to do that when Sony is supposed to be this incredibly successful company in customer satisfaction. They offer no number in my email to call if you have any query’s regarding all your credit card details – Address – Phone Number – Passwords – Email being stolen.

All that they give you is an email address which is www.eu.playstation.com/psnoutage

Now I really don’t believe that i will be getting an email back soon from these dumb inbreeds anytime soon as apparently it was the whole network and all of its 77 Million members who had their information stolen like a 16 year olds virginity !!

My PlayStation account has now been shut down as i cant be bothered with dealing with retards any longer. 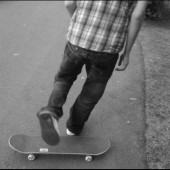 Greg is a gamer and tech lover from Scotland.

Star Wars, A Journey to the Force Awakens

Here’s to the Crazy Ones – STEVE JOBS