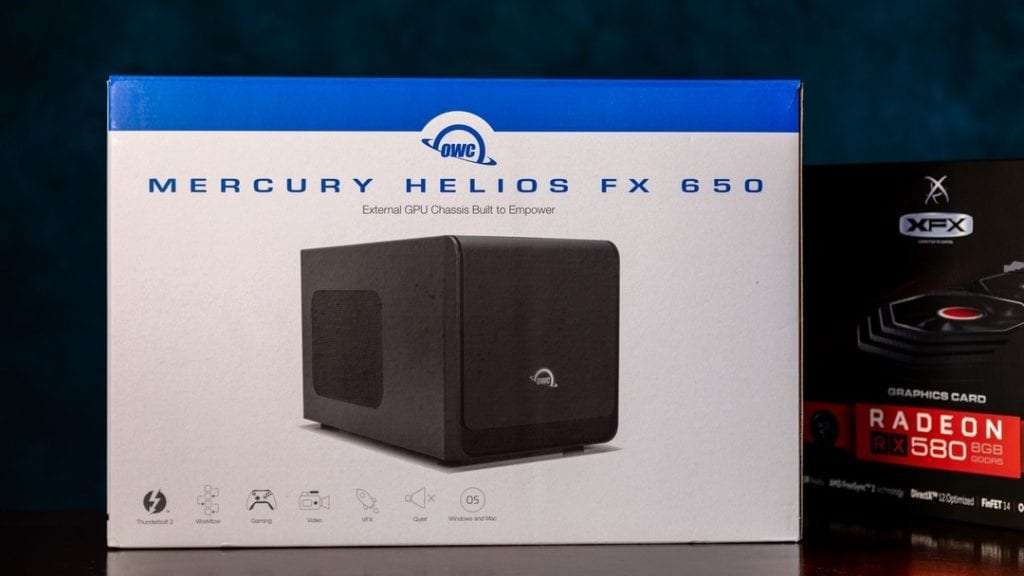 This past fall, I upgraded my MacBook Pro to the newer late-2018 model that included the Radeon Pro Vega 20 with 4GB of HBM2 memory. I knew this would be a significant upgrade for my system which is why I requested it when I ordered the laptop. The problem I’ve run into since Apple changed their laptop design to the unibody shell is that their systems can’t be re-configured. So, the system you have when you purchase the laptop is the one you are stuck with until you change laptops again. For most users, this doesn’t cause that huge of a problem, but when it comes to creative professionals, it can be detrimental to workflows and make it difficult to keep up with technology. That’s why eGPU systems have become increasingly popular in the past couple of years. One of my favorite tech companies — OWC — recently launched the Mercury Helios FX 650, an eGPU chassis designed for Thunderbolt 3 equipped users to maximize their creative potential with a powerhouse GPU. 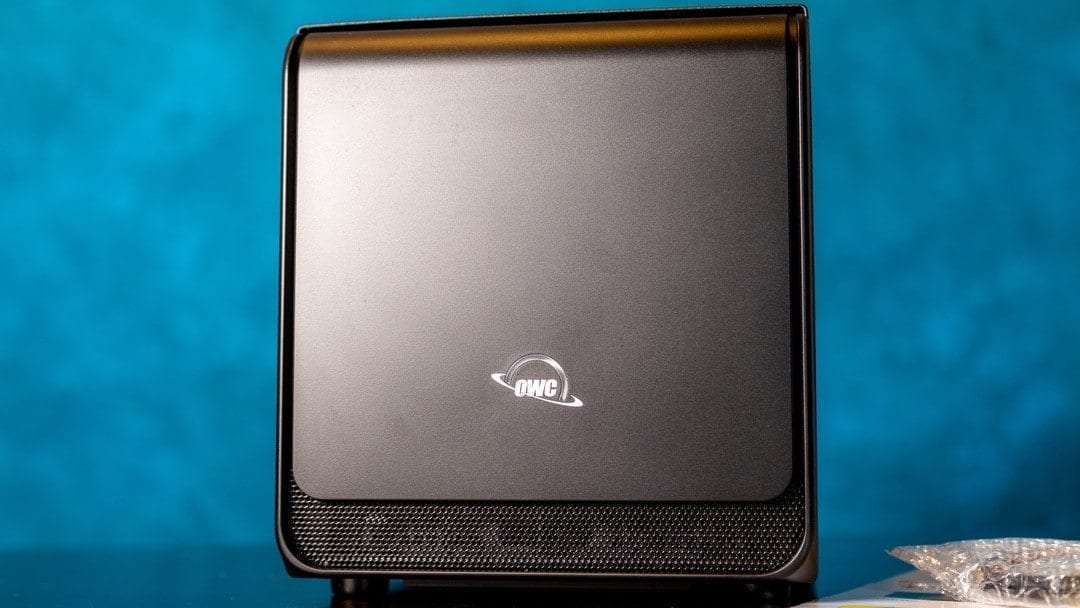 The Mercury Helios FX 650 is a high-performance external GPU that is designed to add performance to a Mac or Windows machine that is compatible with Thunderbolt 3. The chassis does not ship with a GPU (unless you purchase a special bundle). It is ready for the GPU of your choice to be installed. The Helios FX 650 is upgradeable unlike other eGPUs, which makes it easier to move to the next level of GPU when the time comes. The Helios FX 650 features a large variable speed, temperature-controlled fan but is quiet in operation. In addition to the increased GPU power, the chassis also provides up to 100W of charging power for a connected notebook. 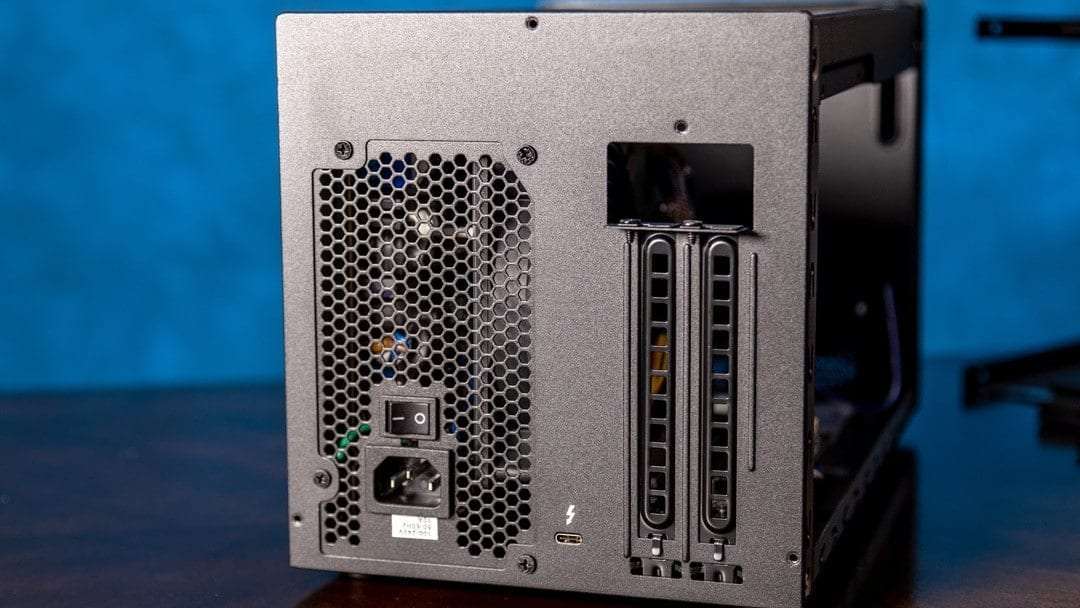 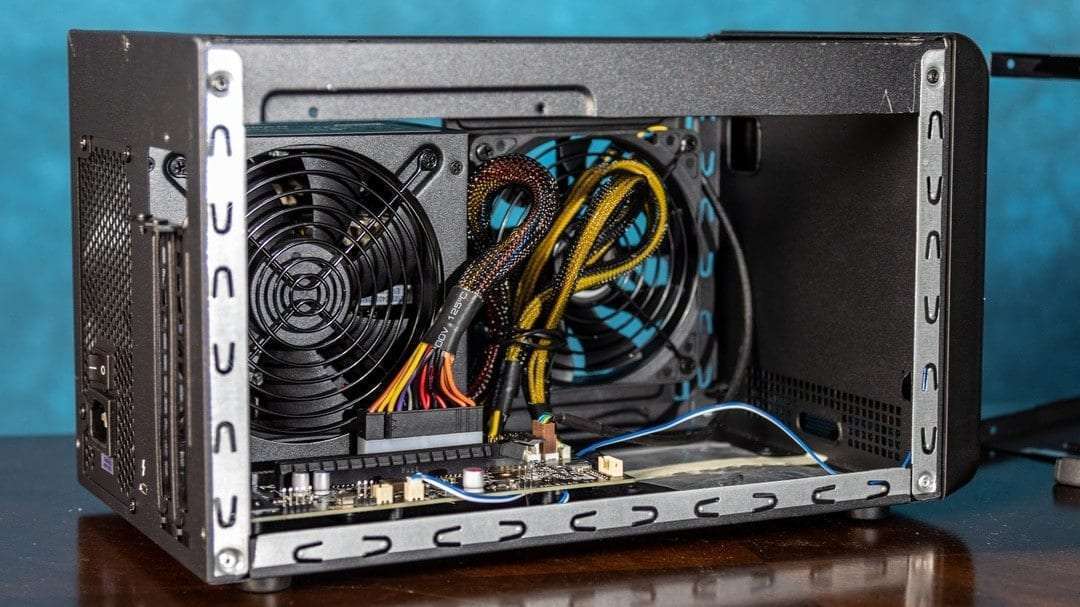 When I first received the Helios FX 650 I was thrilled. It arrived in a large OWC-branded box. The only things included with the shipment were the chassis, a user/installation guide, a Thunderbolt 3 cable, power supply, and cushioned packaging. It is quite a hefty chassis. By it’s specs it is just over 7 pounds — without a GPU installed. Installation of our chosen GPU was very simple. Even if you’ve never worked with an eGPU chassis or assembled your own computer, you will be able to install a graphic card.

After some research, we decided to add the AMD Radeon RX 580, which is the card that OWC includes with the Helios FX 650 if you purchase the bundle option. The card is a powerful, affordable option to add into this system. While it’s considered a mid-level video card (according to PassMark – Radeon RX 580 – Price performance comparison), ranks very high in the power-to-price lists as a high value card. 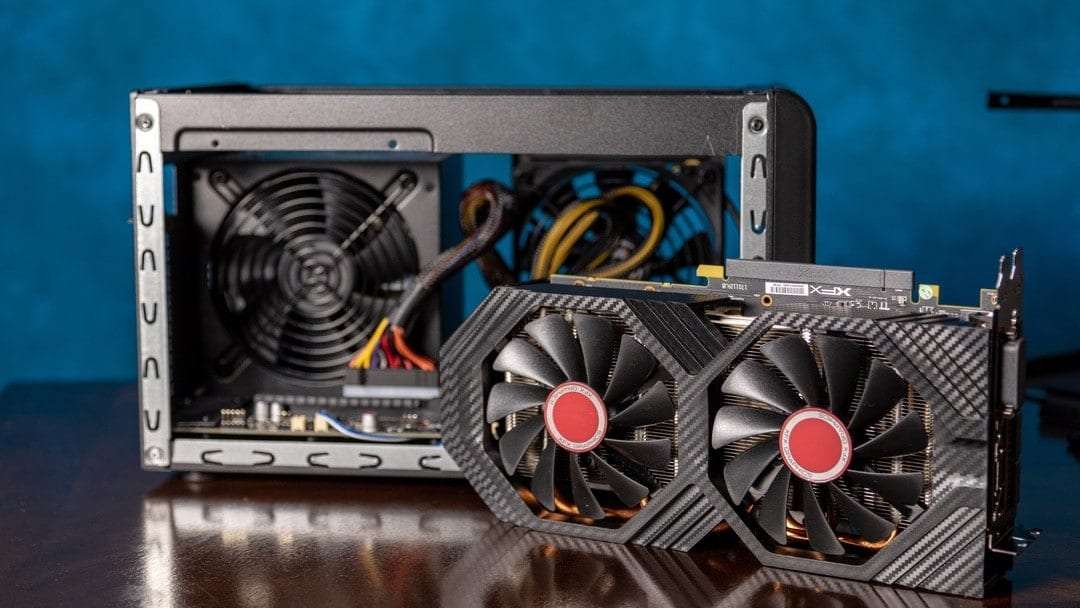 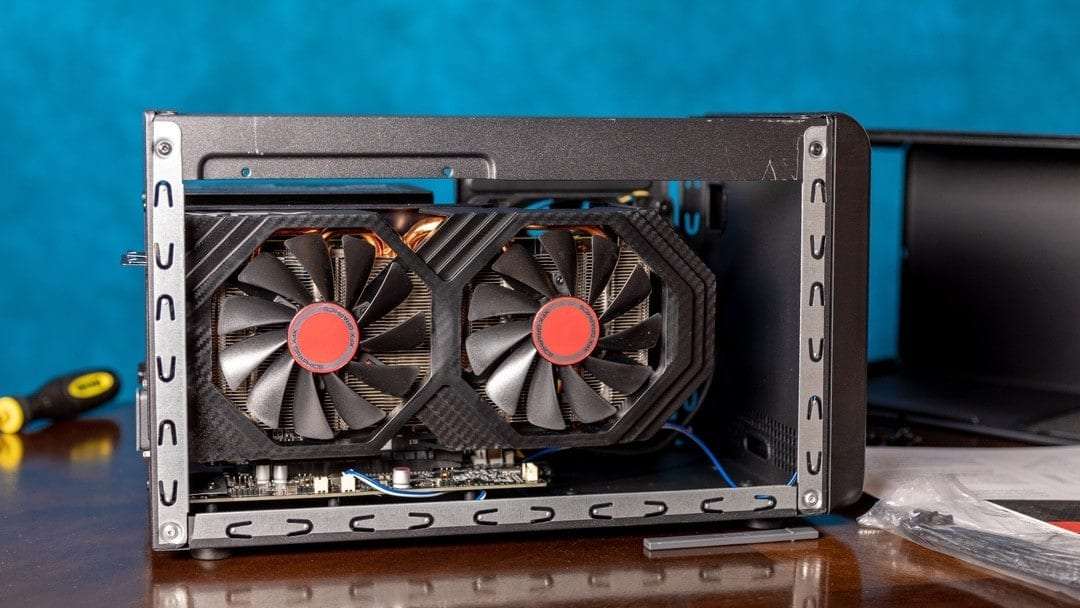 After getting the GPU installed, which only took about 10 minutes (there are lots of little screws), we fired up the Helios FX 650 with my MacBook Pro (late-2018 model with Radeon Pro Vega 20). One of the things I loved about this device was that since it’s Thunderbolt 3 compatible and my MacBook Pro already had built-in TB3 integration, I didn’t have to do an installation of drivers or third party software to make the system work. I simply plugged it into a Thunderbolt 3 port on my laptop and then flipped the on/off switch to power the eGPU on. After about 10 seconds, the eGPU icon appeared in my menu bar and I was able to start using the power behind the eGPU. 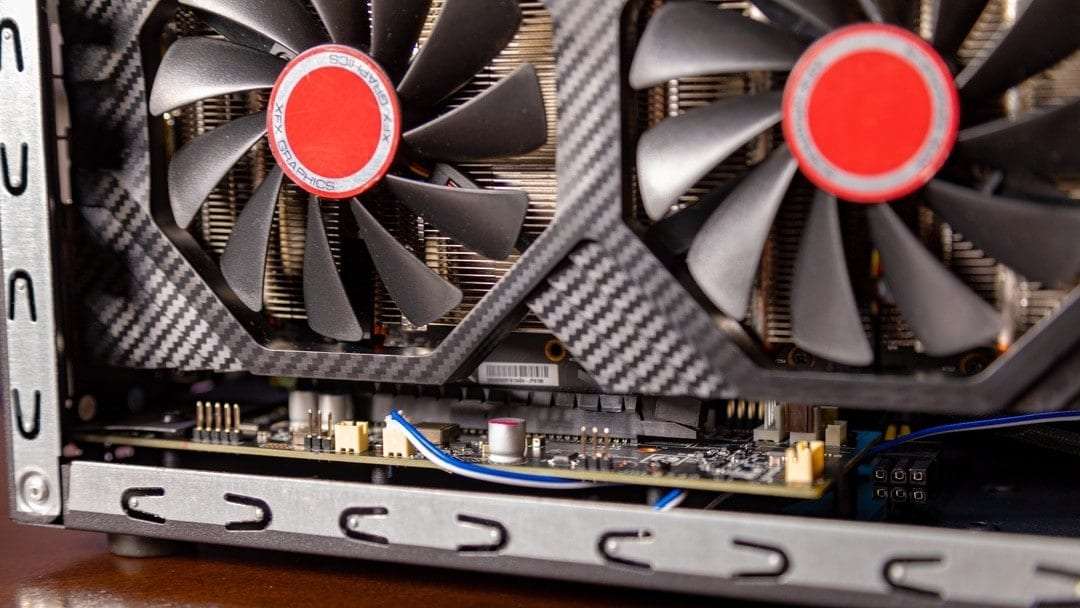 Even though I didn’t have to install any special software to use the Helios FX 650, I did have to take one more step in order to get applications to use the external graphics card instead of the internal one. The first step is to locate the application you want to use in the finder. Then you right click on the app’s name to pull up the options menu. From here, you select “Get Info” to open the information inspector for the application (alternatively, you can highlight the app name and press command + I). You will see an option below the Copyright information called “Prefer External GPU” with a checkbox next to it. If you mark that check box, then the application will defer to using the eGPU the next time it is opened instead of the internal one. 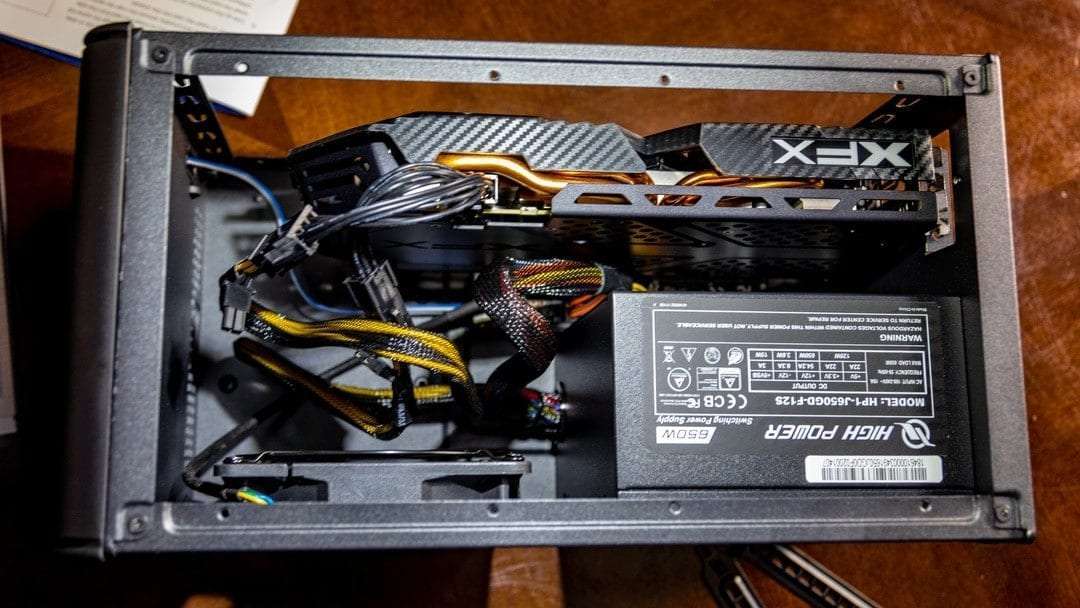 This was the rating I was looking at before I did my own testing. I found that some sources were reporting that the Radeon RX 580 was underperforming when tested from within an eGPU chassis and as it turns out, I found that the internal Pro Vega 20 GPU would beat the RX 580 GPU within the Helios FX 650 by about 27% when using Cinebench to test the different GPUs. 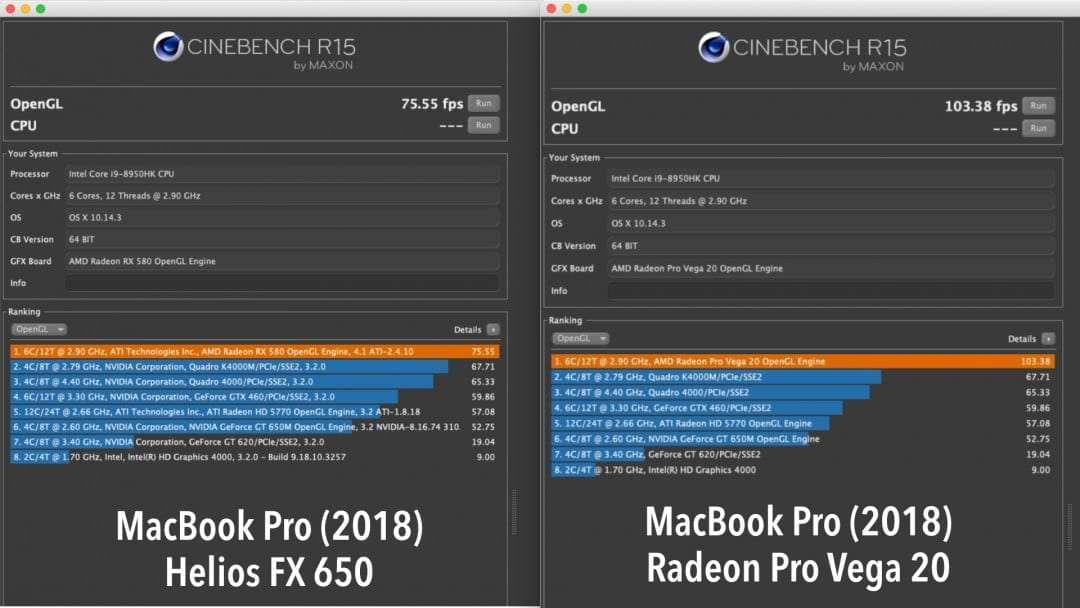 But, when I tested the internal GPU of the 2016 MacBook Pro against the Helios FX 650, the eGPU beat the Intel Iris 550 by about 41%. Since the Intel Iris 550 was the lowest performing card out of these three, I wasn’t overly surprised by this testing outcome, but I found it interesting. 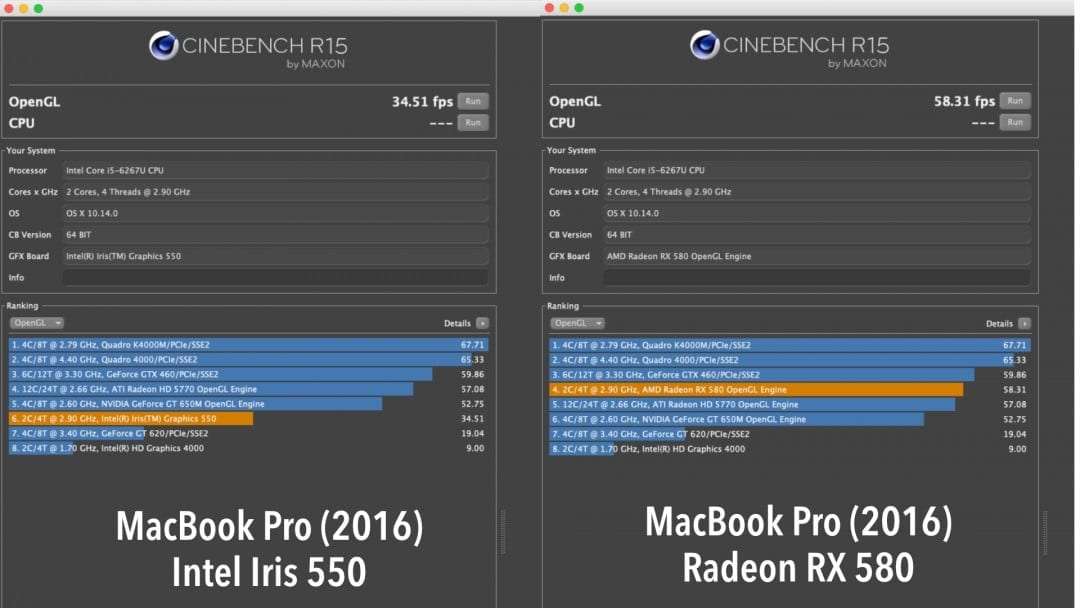 In addition to Cinebench, I also ran benchmarking tests using Valley 2013 by UNIGINE Benchmarks. This app allows users to effectively determine the stability of computer hardware under stressful conditions. For this test, I increased the settings to “Ultra” resolution at 2560 x 1440 using the 2016 MacBook Pro and an external monitor (VIOTEK GN34C Ultrawide QHD Curved Monitor). Using the internal Intel Iris 550 GPU from the MacBook Pro, I was only able to achieve a maximum frame rate of 15.4 while the eGPU from the Helios FX 650 allowed me to get a higher fps of 46.9. 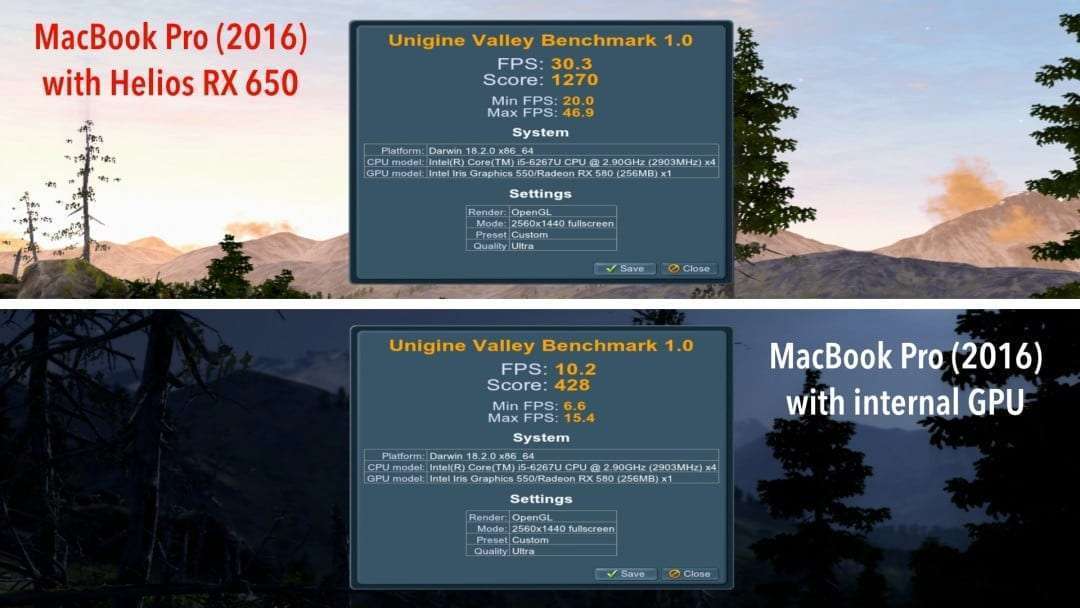 I then completed the same test using the 2018 MacBook Pro. While the internal GPU rating was much stronger than the 2016 MacBook Pro, the Helios RX 650 showed a very similar Max FPS on both systems. And while the Cinebench evaluates performance capabilities like Valley does, I think that Valley did a better job overall of stress testing the GPUs of both systems. 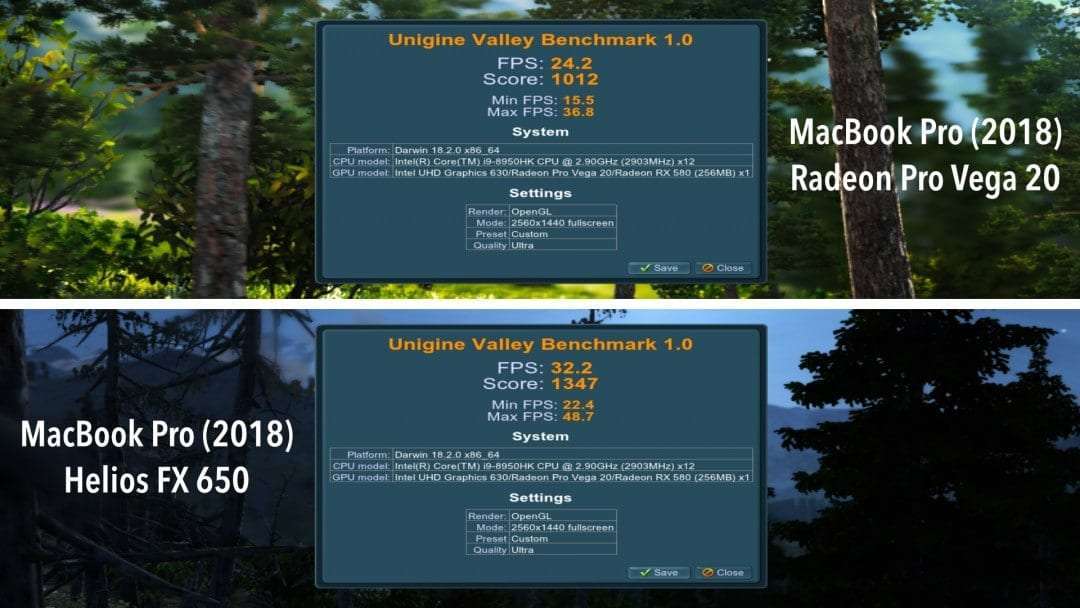 I did run another test where I tested the speed of a video editing app. ScreenFlow is a video editing/screen recording app that is notorious for exporting finished videos slowly on the 2016 MacBook Pro. Since it seems that the eGPU will be more beneficial for that laptop system, I thought it was more fitting to test out apps on that computer. I timed how long it took a short video with minimal effects and edits to export. I used the same settings for the exported video and was surprised to find that it was just a few seconds quicker to export the file with the internal card of the 2016 MacBook Pro than it was with the Helios FX 650.

I think that the Helios FX 650 is a very nice option for enhancing your computing power without having to purchase an entirely new system. I do wish that I had a clearer picture of why the GPU we chose ended up not being consistent with results but I’m happy with the results I did get. For someone who really wants to step up from a basic system to a more advanced one, the Helios FX 650 is a great way to go. While it wasn’t that great of an improvement for the 2018 MacBook Pro (because of the upgraded internal GPU), it was ideal for the 13-inch 2016 MacBook Pro.