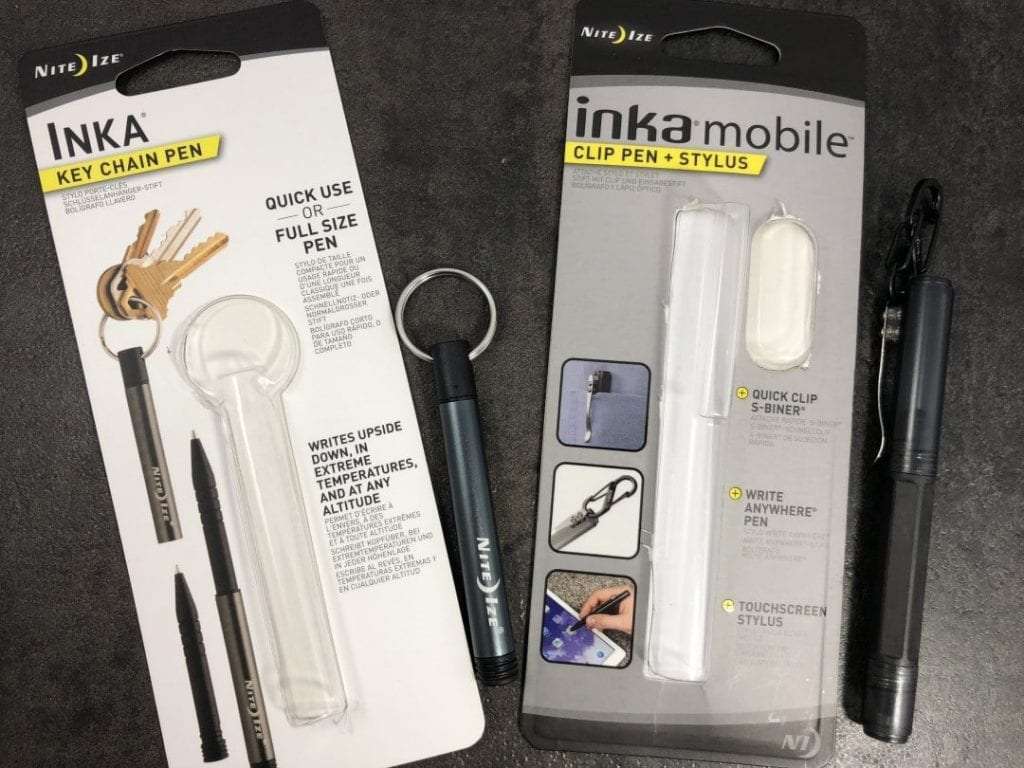 Nite Ize capitalized on the strengths of the previous INKA mobile, eliminating its weaknesses. Never be without a pen again.

Many of us have experienced the ire-inducing feeling of needing a pen and not having one readily available.  Over the past year, I have enjoyed the INKA mobile clip pen and stylus from Nite Ize.  The device was shipped in attractive Nite Ize retail packaging, with a clear blister pack containing the pen.  The device weighed 0.5 ounces and measured 4 5/16 inches tall, without the S clip attached, and  5 5/16 inches, with the S clip attached.  The device utilized write anywhere pressured blue-ink cartridges and could be used at any time.  If you unscrewed the end nearest the S-hook, you could access the writing pen tip.  If you unscrewed the other end, you could access an electronic stylus.  The ink was replaceable by unscrewing the stylus tip.  The waterproof ink was amazing, the writing tip was easily accessible, the pocket clip was helpful, and the ability to convert the device into a full-sized pen was a convenient feature.  Despite my affection for this pen, It proved time and again to be quite lengthy on my keyring.  Nite Ize felt the size issue to be significant and improved upon the old model.

This year at CES 2018, in Las Vegas Nevada, I was able to talk to Nite Ize about the new-and-improved INKA Key Chain Pen.  The device, similar to its predecessor, arrived in a nice retail package.  The differences between the two pens started with the packaging and continued with the device.  Nite Ize replaced the grey background, with a white one, but left the useful images and text.  The new INKA keychain pen can also be used in short “quick-use” mode or can be combined into a full sized pen.  The included ink is a write-anywhere product, allowing you to write upside down, underwater and in extreme temperatures.  The cover image shows the smaller device, without a large pen cap. The back of the packaging proved to be just as elegant as the previous version of the device.  With multiple vivid colors and realistic images, the packaging feels just as high-class as the product.

The new INKA pen and keyring weighs 2 ounces less than its predecessor at 0.3 ounces. The pen measures 3 3/16 inches tall without the keyring and 4 inches total with the keyring. Along the bottom of the pen, you will find a rubberized pressure fitting that slides into the 3/8 inch diameter cylinder.  When you slide the pen out of the cylinder, you can utilize it in “quick-use” mode.  The pen will write in waterproof, non-smearing blue ink.  Unlike most pens, the INKA will allow you to write at any angle, and even upside down thanks to the pressurized, replaceable, cartridge.   The pen technology promises to write underwater, but I did not have any write-anywhere paper to test this feature.    If you have desire a full-sized pen, unscrew the base of the ben from the keyring and the base of the small pen.  Flip the cylinder 180 degrees and screw the male end of the cylinder into the female end of the pen and then replace the plunger style stopper to the end of the pen.  You can now enjoy a normal, full-sized pen.  To return the pen to the keychain form, follow the instructions in reverse.  The pen is comfortable in hand, with a metallic back and a rubberized plastic gripping end. 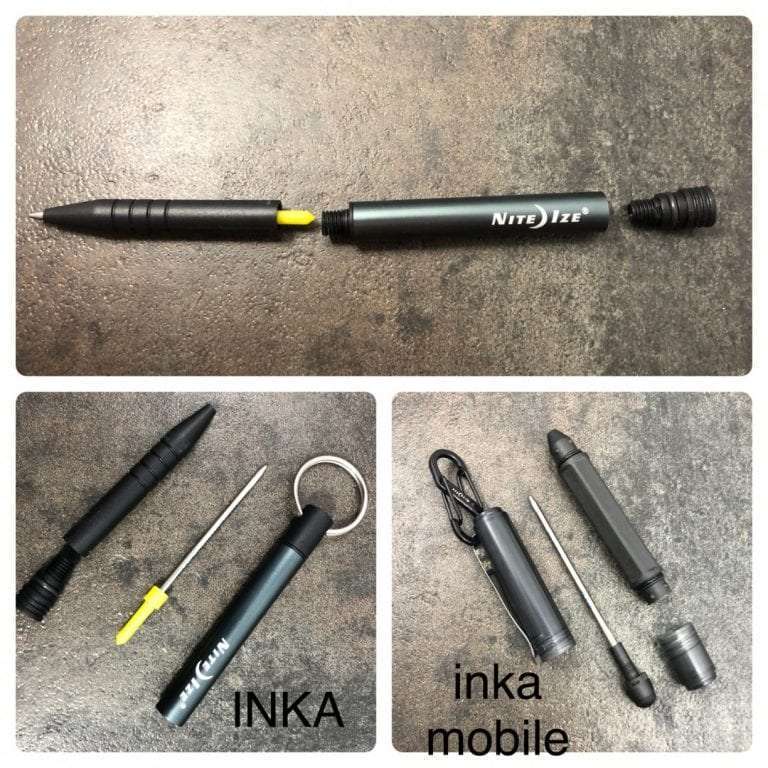 The pen is very sleek and modern, devoid of much embellishment, save a white Nite Ize logo.  The difference in size and weight is quite obvious and appreciated.  Testing this device over the past two weeks, I have experienced first-hand, the benefit of having a readily available pen.  Since I sign most of my documents in blue ink, the simple choice of ink color proved to be another perk for the INKA pen.  The pen may seem like a low-tech device, but Nite Ize has turned low tech into a must-have tech.  I would rate this pen at 5/5 stars, and the previous version at 4/5 stars.  The same features that caused the INKA mobile clip pen to receive a less than 100% rating resulted in the current INKA pen receiving high honors.