The Quell is an amazing pain relief device. It is easy to connect to and operate from your phone and it provides relief when other methods fail. This is the best option I've found that helps with chronic pain.

When I first saw the news the NeuroMetrix released an updated version of their wearable pain relief device the Quell, I was ecstatic as I am a super fan of the first GEN Quell. The Quell has taken me to a new place in my life. I’m no longer riddled with pain and I’ve been at ease. I have days that my leg pain comes on so strong that even with the Quell I can still feel it but for the most part, that is few and far between.

Quell’s website states that the Quell 2.0 is more than a wearable device. It’s a comprehensive system to help you reclaim your life from pain. Users are instructed to use Quell daily to maximize your results. A Quell pain relief device works by stimulating sensory nerves in your calf and send neural pulses back to the brain, which activates the body’s natural pain blockers to relieve chronic pain.

Quell 2.0 is smarter, more powerful, and 50% smaller than the original version of the pain relief device. The Quell Relief app is at the core of the Quell system. It manages your personalized Quell system so that it works best for you. The app allows users to calibrate the Quell device, start and stop therapy sessions, and adjust the intensity of therapy. You can also enable Therapy Automation feature, which makes Quell more integrated into your lifestyle. The app will help you track weather changes as that can affect your pain level. 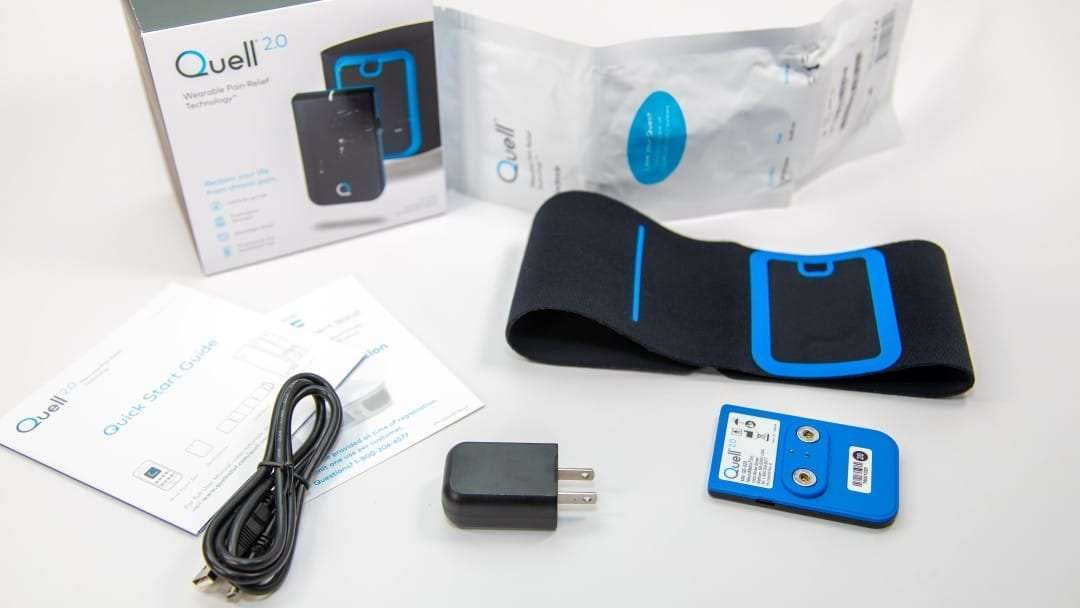 The Quell system consists of the Quell 2.0 pain relief device, 1 electrode, Quell 2.0 standard band, and the companion app. It retails for approximately $300 but comes with a money-back guarantee (after a 60-day trial period). 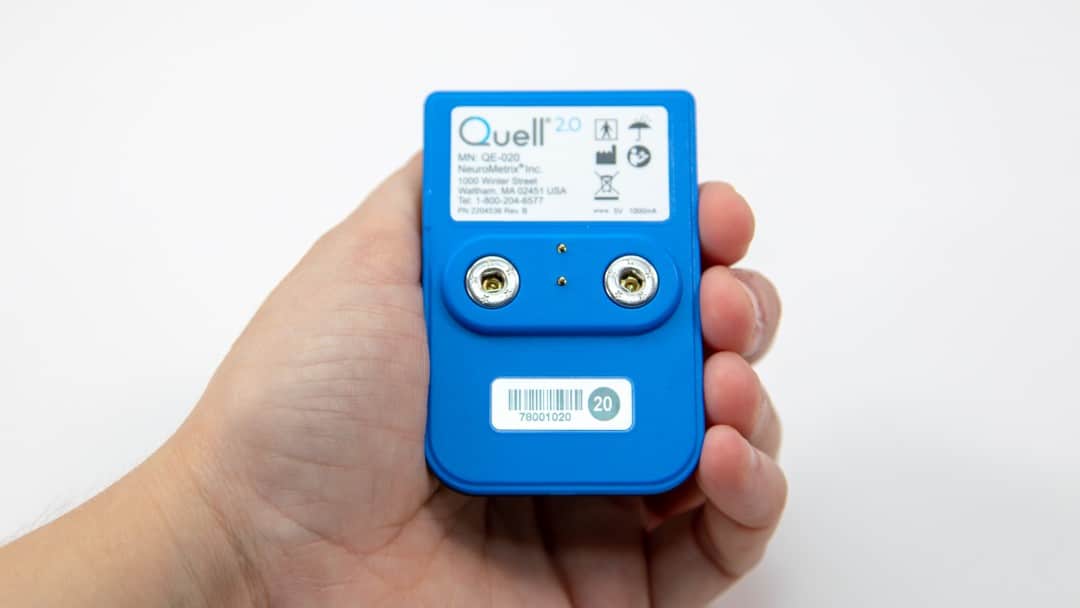 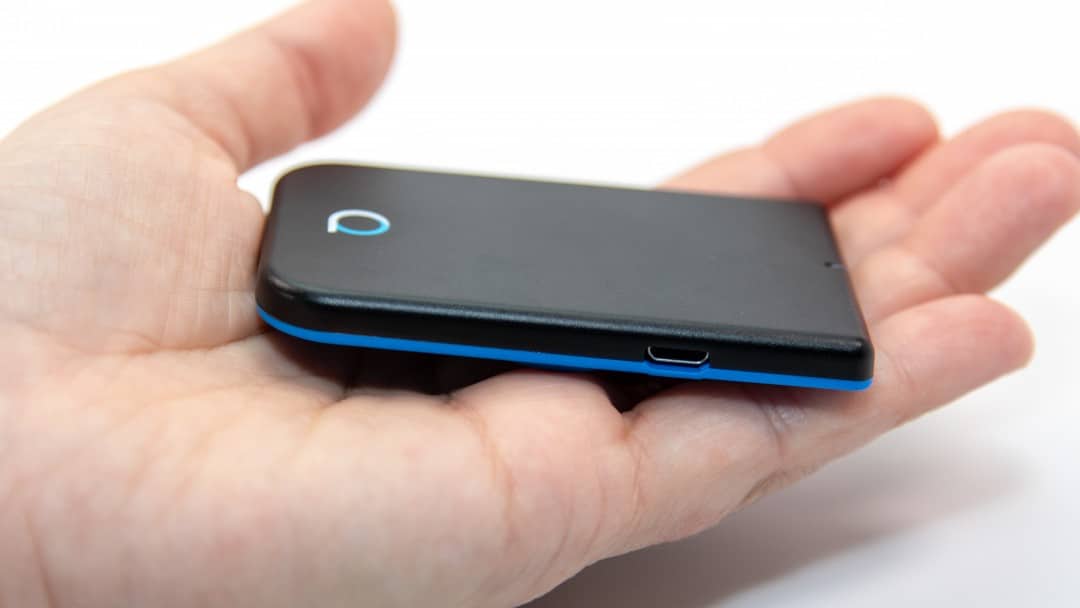 The Quell 2 comes in a box that is gray with a white front, back and side. There is a photo of the Quell 2.0 along with the new band and some basic information about the pain relief device printed on the box. On the sides, you will find some literature about how Quell works and a commitment to reclaim your life.

If you’re not satisfied with the level of relief you can return for a full refund with its 60-day money back guarantee. On the back, you will find some details about the iOS and Android app and how you can use it.

The packaging is very similar to the first generation Quell. So for all of you finding Quell in retail stores like Meijer’s, be sure that the “2.0” is present next to the word Quell so you know you picked the right version. Once you slice the box open and pull open the magnetic flap, you will be greeted with the Quell 2.0.

To the left, is a statement from Shai N. Gazani, M.D., Ph. D. President and CEO, of NeuroMetrix. Below the Quell 2.0 is a coupon for $5 off Electrodes or replacement band when you register your and a quick start guide. 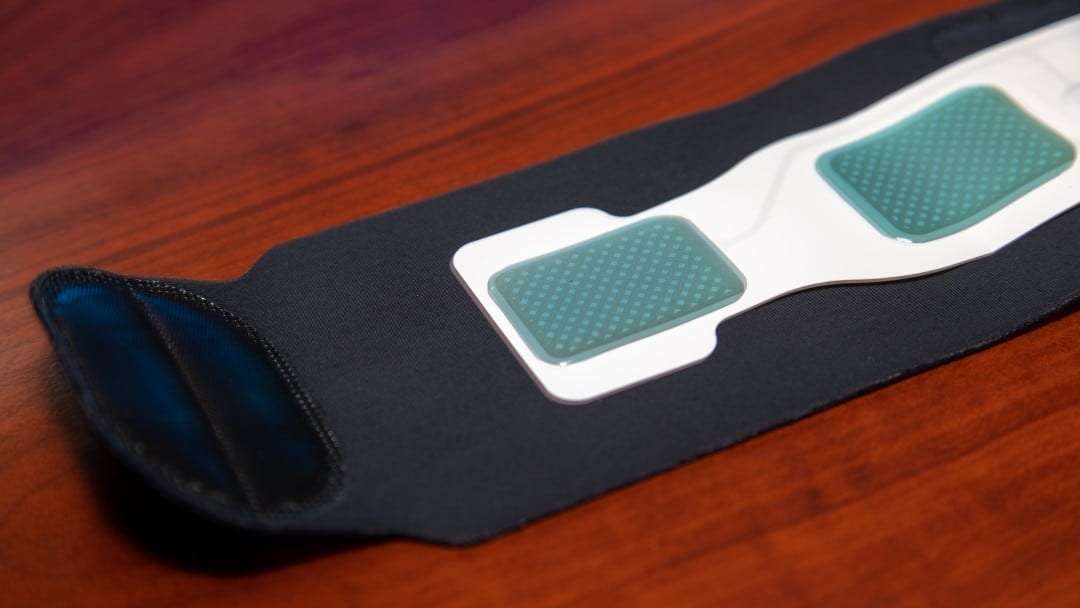 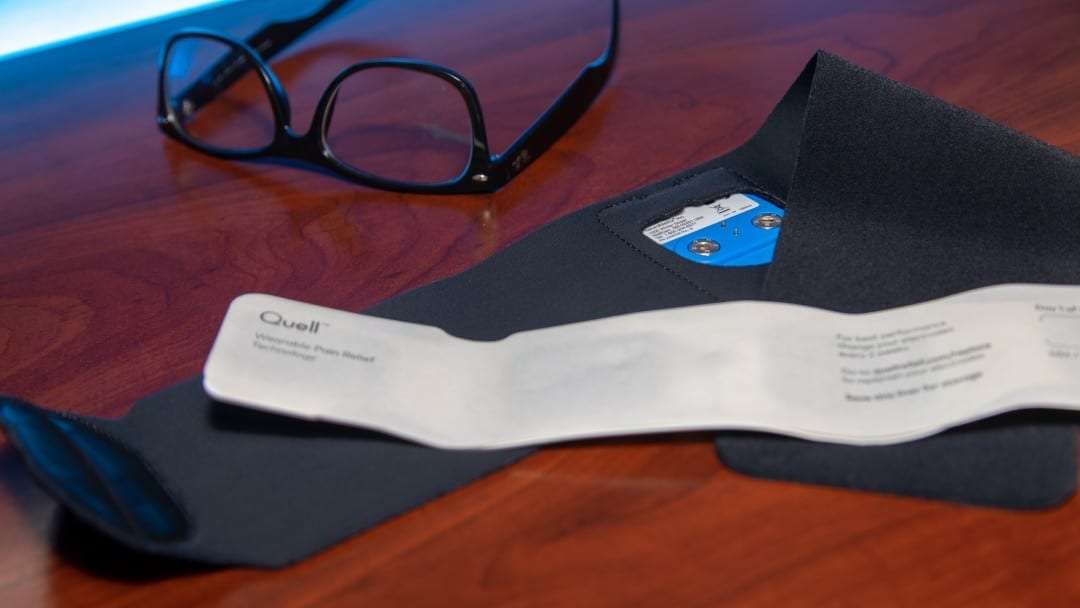 The band and Electrodes (the Quell ships with a 2-pack) are stored below the stuff listed above. The only thing left below that is the charging brick and Micro USB cable. I was actually disappointed to see a Micro USB charging option again. Since this is a new product, I would have liked seeing the inclusion of USB-C to make charging on the go easier for someone like me who is trying to limit my need for multiple cables.

Looking at the pain relief device itself, the basic functions are the same as the first generation model of the Quell. The updates are present in the physical size of the device and the technology inside it. A design feature that I’m happy about is that the original electrodes will still fit with the new Quell 2.0 band. So if you are an existing user like me and have been stockpiling electrodes with your current Quell, they will still work with Quell 2.0. 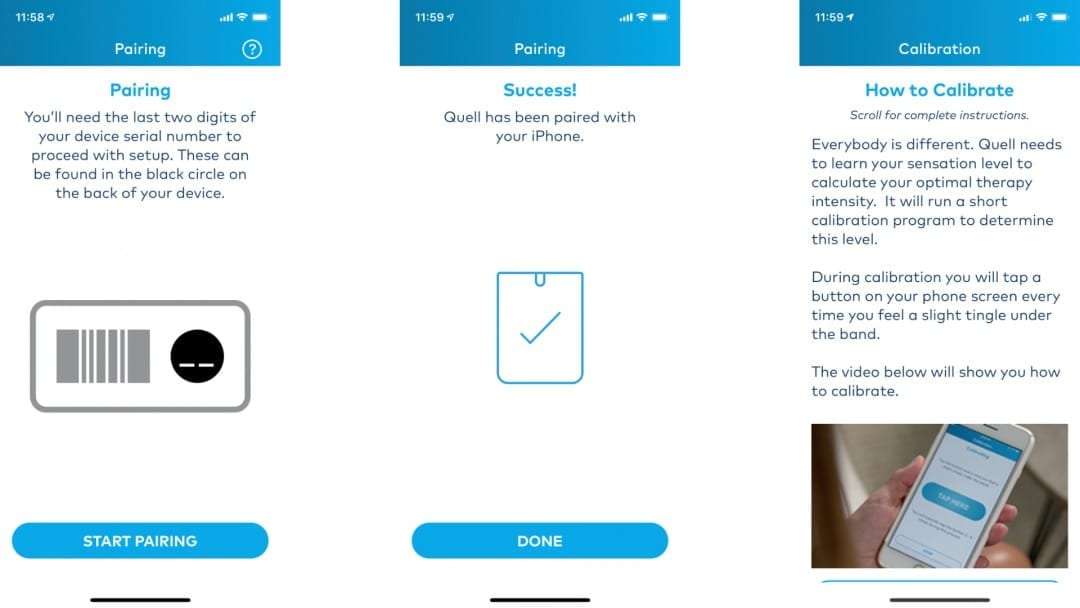 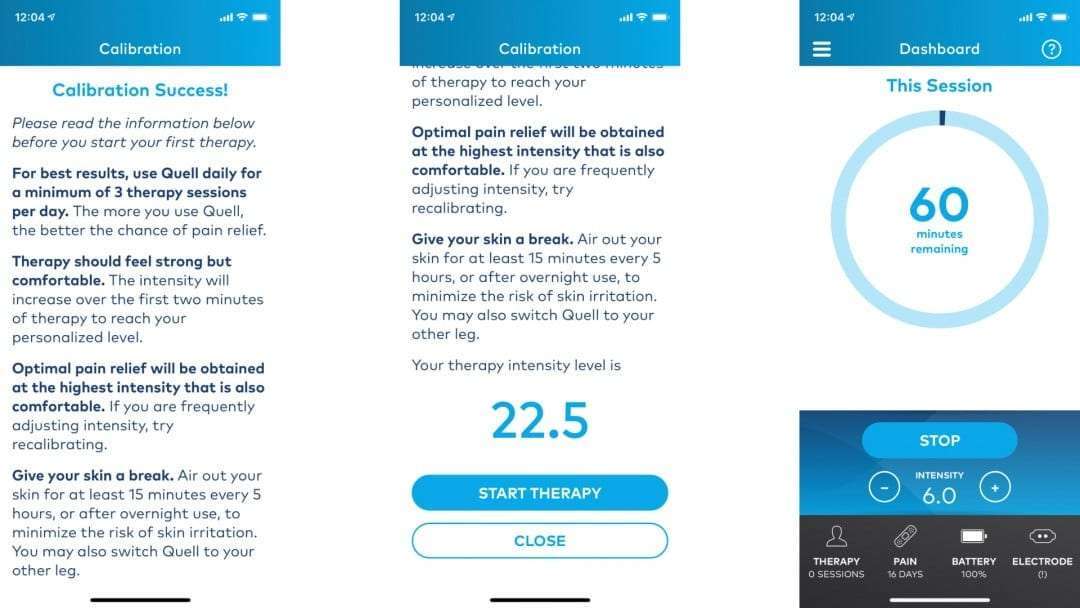 Another big difference you might notice when comparing the 1st and 2nd GEN Quells is that the second GEN no longer has the physical button on it. That said, it’s not completely controlled by the iOS app. While using the new Quell 2.0, if you need to take it off and aren’t in a reaching distance of your phone — no sweat.

You can simply double tap the center of the device with two fingers to stop treatment immediately. This is a welcome improvement in my mind because I actually changed the settings on my First GEN Quell so that I could only control it via the app. I did this so I didn’t accidentally make a change from the button interface.

The Quell 2.0 does not have a battery indicator on the pain relief device as the First GEN did. This is a little bothersome to me because I liked being able to tap the button on the device and see how much battery was left. Now, I’ve run into an issue a couple of times where I put the Quell 2.0 on only to find that it’s dead.

I’d like to have a reminder of the battery status as a push notification before it’s due for a charge. Maybe that can be added in a future update to the app. I have also noticed that the battery seems to run out a little faster than the First GEN pain relief device.

I’d also like to see an Apple Watch app or CarPlay app enabled in the future (As of March 2022, there is an Apple Watch app available, but for some reason, it will not install). There are so many times that I’m on the go and it would be nice to be able to manage my treatment from the watch or car stereo while I’m driving instead of having to fumble with my phone.

able to turn on the Quell from a CarPlay enabled radio by tapping on one button would be ideal for people who drive for a living and use a Quell to help with their pain. The same type of situation applies to the Apple Watch app. People sitting in a boardroom may not have the option to pull their phone out, but a few tapes on the Apple Watch to start or end treatment would be amazing. 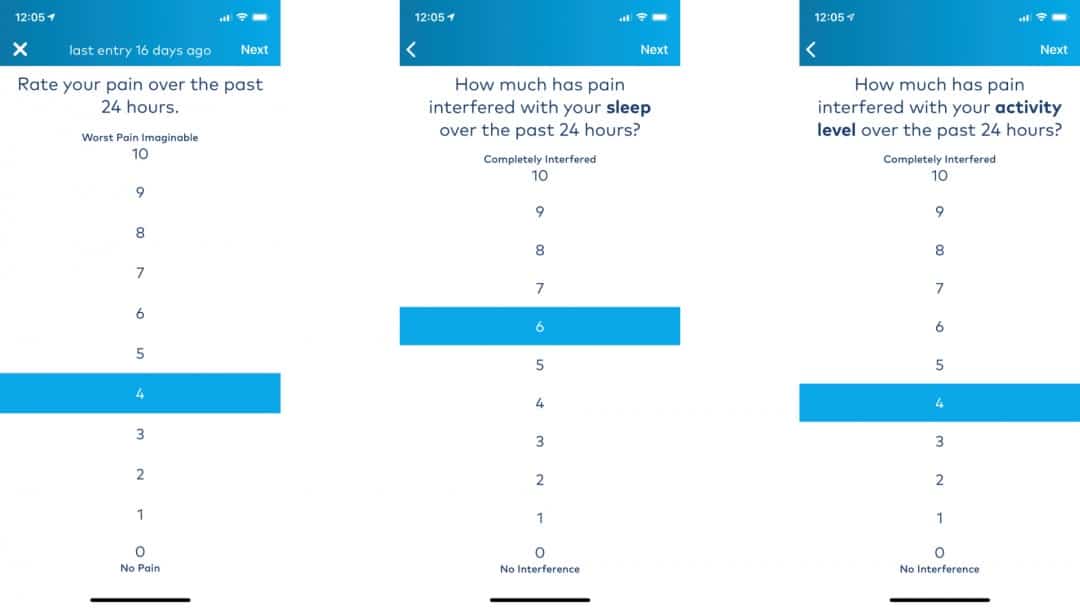 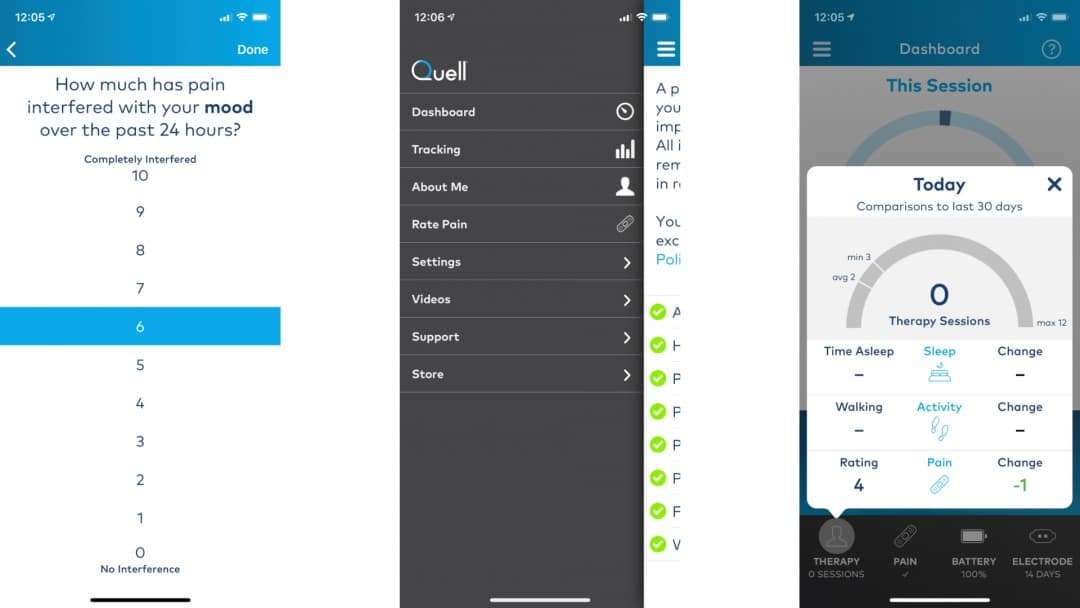 While I am not a fan of the Micro USB charging input chosen for the Quell 2.0 pain relief device, I am a super fan of the Quell. The newer compact design allows me to keep it on all day without the electrode popping off its contacts. With the First GEN model, if I would sleep with it on, I would find myself having the Quell pop off the electrodes. It was horrible in the middle of the night to have to get up, take it off, pop them back in place, and then try to fall back asleep. The smaller unit is vertical and I’ve yet to have it pop loose on me once.

As someone who suffers from leg pain and sometimes lower back pain, I can’t express to you enough on how the quell has changed my life. I went from being on a four pain pill a day regiment to only needing them when the weather is beyond cold and even then, it’s not an all-day requirement anymore. The Quell changed my life and the Quell 2.0 pain relief device is a great improvement upon the first model so I feel anyone who looks into this gadget and gives it a true chance will benefit from how awesome it is.