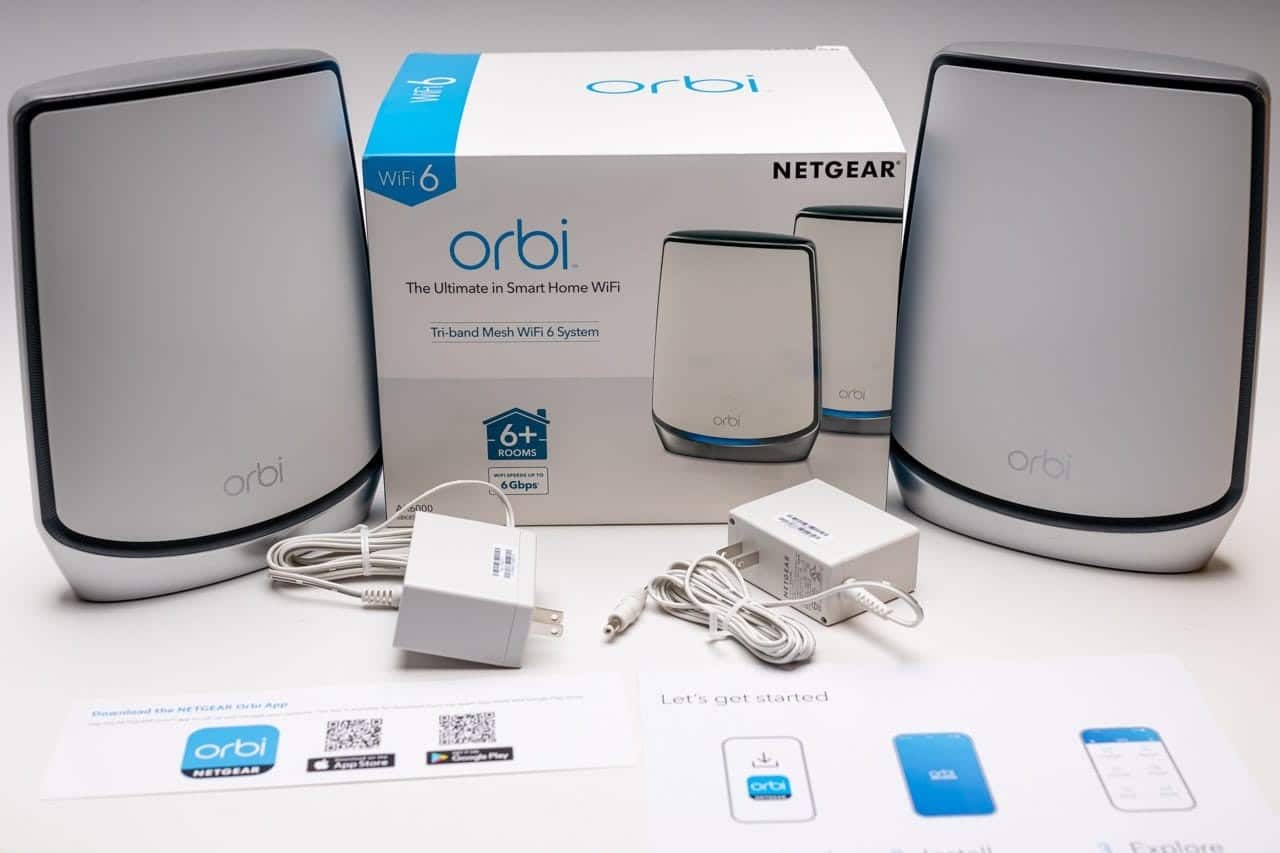 Orbi covers my whole home and yard. It’s the best money can buy

Just a few months ago the world found itself thrust into the digital world when the physical world around us became off-limits. Some people were ready for it, but some were not. Many people suddenly found themselves working from home and using systems like Zoom and relying 100% on email to connect with each other. I was one of the few people who was prepared for this type of transition because our home network was set-up for super fast speeds and allowed for lots of bandwidth usage. Even though I didn’t have to play catch-up, we did make the decision to upgrade our WiFi network to a router that would be compatible with WiFi 6.

WHAT IS WiFi 6? WHAT ARE ITS BENEFITS?

You might be wondering, “What is WiFi 6? Is this something I need?” or, “Isn’t all WiFi, just WiFi?” WiFi is the world’s most commonly used wireless communications technology. It’s been in use for more than 20 years now and is constantly evolving and being changed to suit the needs of the world. There are currently 3 main types of WiFi in use: WiFi 4, WiFi 5, and WiFi 6. You might recognize the different types by the standard they are using. For example, WiFi 5 uses 802.11ac technology while WiFi 4 uses 802.11n technology. The latest iteration in WiFi technology is WiFi 6 and it utilizes 802.11ax technology. Most items being created and shipping to consumers today are still using WiFi 5 with a few exceptions. Some of those exceptions include the most recent iPad Pro that was released in 2020, all models of iPhone 11, and Samsung Galaxy Note 20.

So, do you need a WiFi 6 compatible router today? I would say, it wouldn’t hurt to upgrade now. By doing that, not only will your newest devices get faster wireless speeds, but you will also be prepared for future upgrades. Some of the key benefits of WiFi 6 include higher data rates, increased capacity, performance in environments with many connected devices, and improved power efficiency. Some of the places utilizing WiFi 6 include congested networks like airports or busy office buildings. In our case, we have a lot of devices on our wireless network because we have lots of smart devices connected. With our last count, we had 22 devices connected to our WiFi network. I would venture a guess that most homes would have maybe 10 or less connected devices for their wireless network. Therefore, it may not warrant upgrading to a WiFi 6 compatible router, however, if you are looking for something that can accommodate multiple devices without sacrificing performance to those devices, I would recommend upgrading. Our router of choice if the Orbi WiFi 6 System from Netgear since Netgear was one of the first manufacturers to use the new 802.11ax standard.

The Orbi WiFi 6 System (RBK752) is a whole-home mesh WiFi system that is designed to cover homes up to 5,000 square feet in size. The system includes one WiFi router and one satellite. It is designed to keep all connections strong in every room of your house. It is powerful enough to provide 4K/8K UHD streaming capabilities and online gaming to multiple screens simultaneously without interruption. WiFi 6 technology provides up to 4X more increased capacity than WiFi 5 (802.11ac) systems. The Orbi WiFi 6 System will deliver a consistent signal to up to 100 devices — inside or outside your home. It has a dedicated quad-stream WiFi 6 backhaul that allows gigabit throughput throughout the home thanks to the tri-band WiFi. The system comes with a companion app that gives you the option to modify all the settings on the network including creating a guest network, viewing connected devices, and performing speed tests. The router has one WAN + three LAN ports built-in and the system works with Amazon Alexa and Google Assistant.

Our previous WiFi router was also an Orbi mesh system, but it was the Orbi Trio-Band WiFi System and it was only compatible up to WiFi 5. In March of this year, when all of us ended up being homebound, we realized that we were experiencing a lot of dropouts and lagging connections — especially between the online gaming system and our media streaming devices. As it turns out, the Orbi Tri-Band system only guarantees coverage for 25 devices and up to 3Gbps. The Orbi WiFi 6 provides up to 6 Gbps speed and as noted above, it can sustain up to 100 devices on its network. The Orbi Tri-Band was a great router for a very long time, but we simply outgrew it. I do want to pause here to note that either Orbi is just a router. That means, you still need a modem to pull in the Internet signal from your service provider. We were running a DOCSIS 3.0 modem, which can work with the new Orbi, but we ultimately decided to upgrade the modem as well to the NETGEAR Nighthawk CM1200, a DOCSIS 3.1 modem. While that level of modem isn’t required to take advantage of WiFi 6, you do want to make sure you have a powerful enough modem to have the highest speed Internet possible from your service provider. I also want to make note that you will need service from your ISP of at least 500Mbps.

The installation of the Orbi WiFi 6 was very simple. NETGEAR makes the process painless thanks to their mobile app. The first thing you are instructed to do is reboot your modem and then connect the Orbi to the modem and a power source. Once it’s connected, you are instructed to position the satellite and connect it to power, too. It takes the WiFi system a few minutes to fully power on and pull in the signal from the modem. The app walks you through each step of the process as it’s happening, which is a pretty cool feature. Once the router is live you can customize the settings by renaming the WiFi Network and changing the password. Each router has a default network name and password that is pre-programmed into the router, but you should never use this as your permanent network settings as others with the same router model could potentially have the same network name and password.

Now, if you had a pre-existing WiFi network as we did, you can change the network name and password to match the previous network’s details so that you don’t have to re-program devices with the new network information. If you had concerns about your network being secure, I would recommend that you start the network from scratch with a new name and password. Once you have settled on your network details, you will likely have to complete the firmware update. Again, the app walks you through all the steps. The process can take a few minutes to complete and the router will reboot when it’s done. When that step is completed, the WiFi network is up and running. NETGEAR does offer ProSupport in the form of their ProSupport plans (an extra charge) and network security through NETGEAR Armor powered by BitDefender (also an additional fee).

There are two tests I completed to assess the performance of the Orbi WiFi 6. The first was just a standard speed test. The Orbi app has a Speedtest built-in and it’s powered by Ookla. I used that speed test with the older Orbi set-up and registered 404.66 Mbps Download and 23.49 Mbps Upload. After the installation was complete of the Orbi WiFi 6, I got 480.64 Mbps Download and 23.91 Mbps Upload. I want to note here that our ISP only provides us with speeds between 450-500 Mbps. Even though the speed test only shows a moderate increase, the real test has been how our devices are working with the new set-up. I’ve done speed tests throughout our house and had a very consistent measurement no matter where I am. Since we’ve installed the Orbi WiFi 6, we’ve not experienced any lag or issues with network speed dropping due to the number of devices we have connected to it.

Another really helpful tool that is included with the app is the traffic meter. This allows you to see the total amount or average amount of data transferred over a certain period of time. This is a nice option for those who want to monitor network usage closely. The only thing that is ‘missing’ from the Orbi WiFi 6 set-up is parental controls, but that can be added in through Circle.

I’m a big fan of NETGEAR in general when it comes to networking devices. They provide a quick, easy set-up and full-featured options for monitoring and modifying the settings through mobile apps and browser-based user interfaces. This is now the third Orbi system I’ve used and I’ve been happy with them all-the-way-around. The only real downside to it is that it’s very expensive. The 2-pack AX6000 system retails for around $700 at the time of this review being published. There is also a 3-pack version that retails for $1,000. Netgear does offer a less expensive model (AX4200) that also provides WiFi 6 to households up to 5,000 sq ft but its specs are not quite as advanced as the AX6000. The differences between the two models are outlined below.

The Orbi WiFi 6 is exceptional and it’s been amazing to be able to trust that all our devices are getting the best possible signal and that they aren’t going to get kicked off the network anymore because there are too many devices connected. 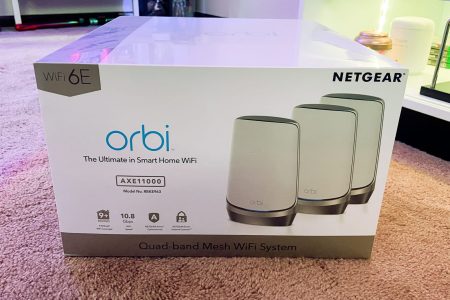 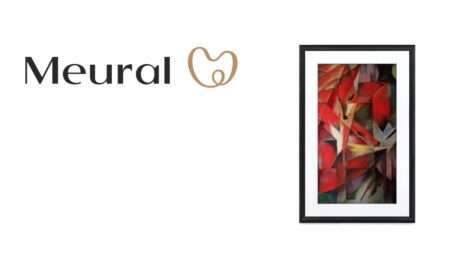 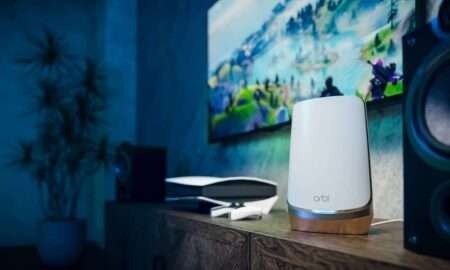