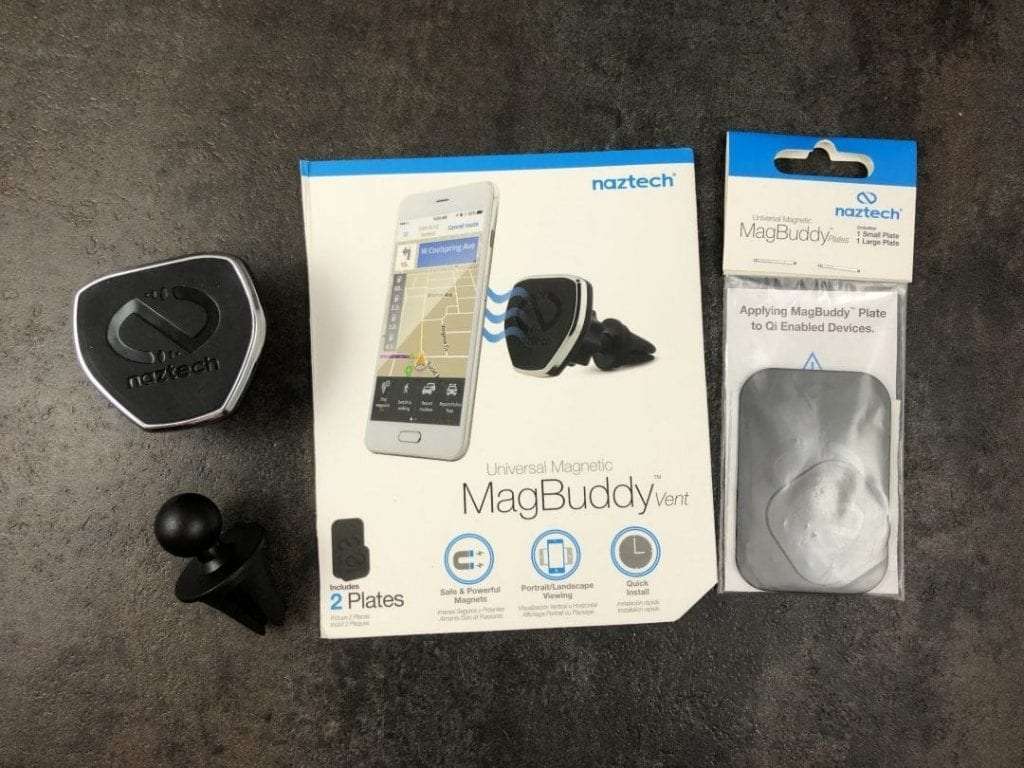 According to the NHTSA.gov website, distracted driving claimed 3.450 lives in 2016 and 391,000 were injured in 2015.  Trying to follow safety guidelines, I found that I used my phone less if it was mounted to my dash/car vent.  Instead of holding onto my phone, I relied on voice commands and Bluetooth technology. Having tried devices like the Steelie mounts from Nite-Ize, and a few other dash/windshield mounts, I wanted to give the mounting systems from Naztech shot. 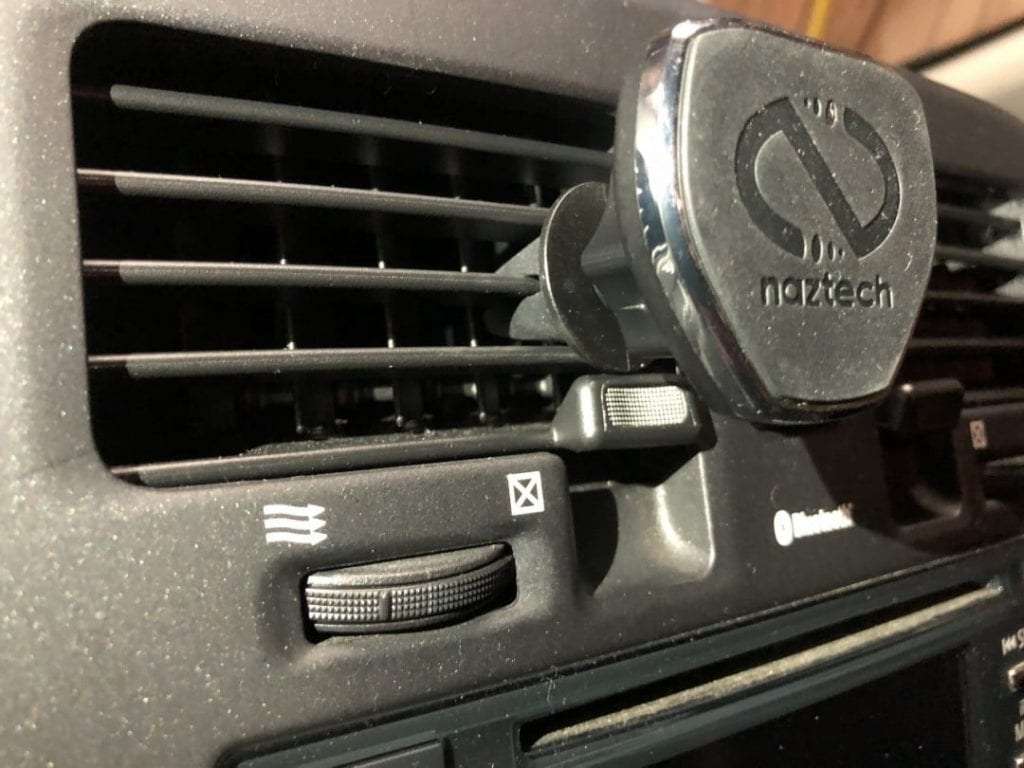 The Universal Magnetic MagBuddy Vent arrived in a 4 9/16 inches wide by 5 1/2 inches tall by 2 1/8 inches thick retail box.  The cover provided an attractive photographic quality image of the MagBuddy Vent and also detailed the two included plates, safe and powerful (neodymium) magnets, portrait and landscape utility and quick install.  Rotating the packaging ninety degrees counterclockwise, you will find four ink outline drawings that show the possible locations for the MagBuddy Plate (behind the case, behind the battery cover, directly to the case, directly to the device).  Amazingly, this information was also listed in French and Spanish.  The back panel of the packaging provided some additional information about the installation and features of the device.  The packaging promised a secure grip with bump resistance, a locking knob, 360-degree swivel ball, and a universal vent grip.  To install the product, you can simply add the MagBuddy Plate to your device, put the locking knob on the 360 degrees locking ball head and then twist the locking knob until the device is secured.  Opening up the magnetic cover flap, you can directly visualize the device behind a clear plastic window.   Beneath the window, Naztech added the same three icons from the cover (safe/powerful magnet, portrait/landscape view, quick install).  I was pleased with the inner surface of the magnetic flap, which provided an attractive and realistic image of the MagBuddy device. 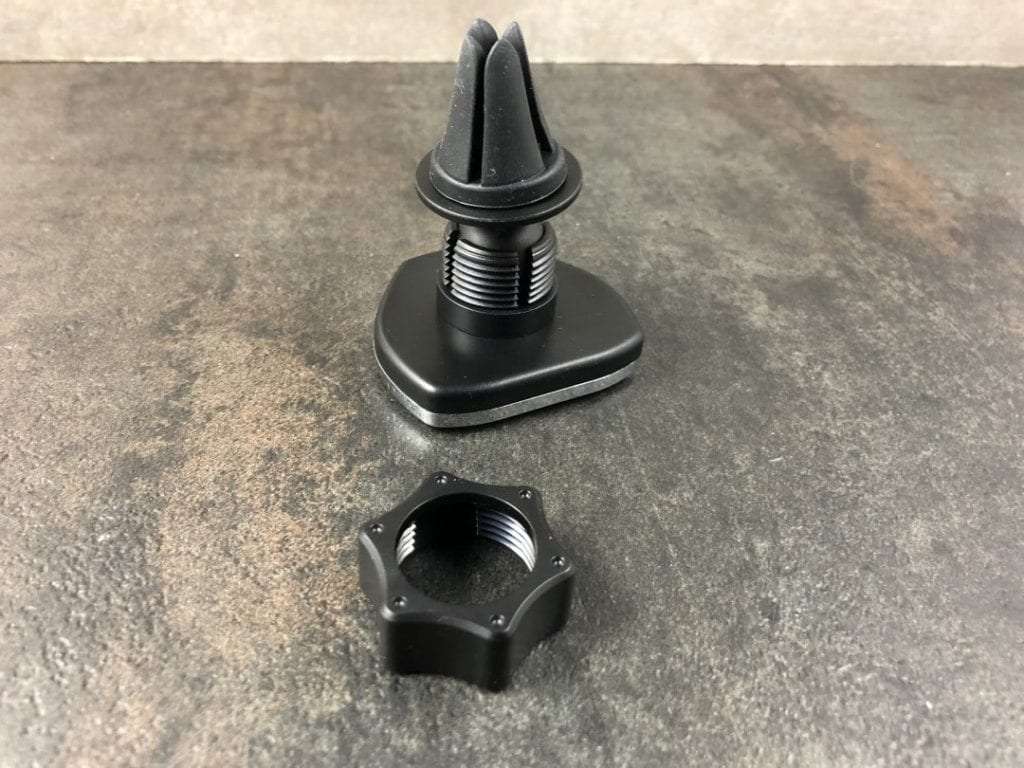 Inside of the packaging, you will find the magnetic backing and vent clip, attractively displayed in a clear plastic shell.  The company creatively used a thin piece of cardboard, with a mirrored surface, to highlight the vent clip.  Underneath the thin plastic shell, you will also find an individually wrapped package of two MagBuddy Plates (one small and one large plate).  The packaging provided a very useful warning about avoiding use in devices with a hard-drive and also recommended proper placement of the plates for devices that use Qi Charging.  Since most phone Qi chargers are located along the middle of the phone, it was recommended to place the plate near the bottom of your case.  Furthermore, the instructions recommended caution when trying to remove MagBuddy from plastic surfaces and using a plastic card to remove the plates, if needed. I used a piece of tape across the smaller plate to find the best place to allow Qi charging.  The 1 1/4 inch square metallic plate was able to align just above “iPhone” on the back of my Waterproof Catalyst Case for iPhone X.  Using a Ventev Wireless Chargestand, I was able to charge my iPhone X with the metal plate just above the “iPhone” label and anywhere below.  I found that placing the plate any higher, from the Apple logo to 1 1/4 inches above the “iPhone” label, caused failure of Qi charging.  If you are not using Qi Charging, I would consider placing the top edge of the metallic plate just beneath the Apple logo. 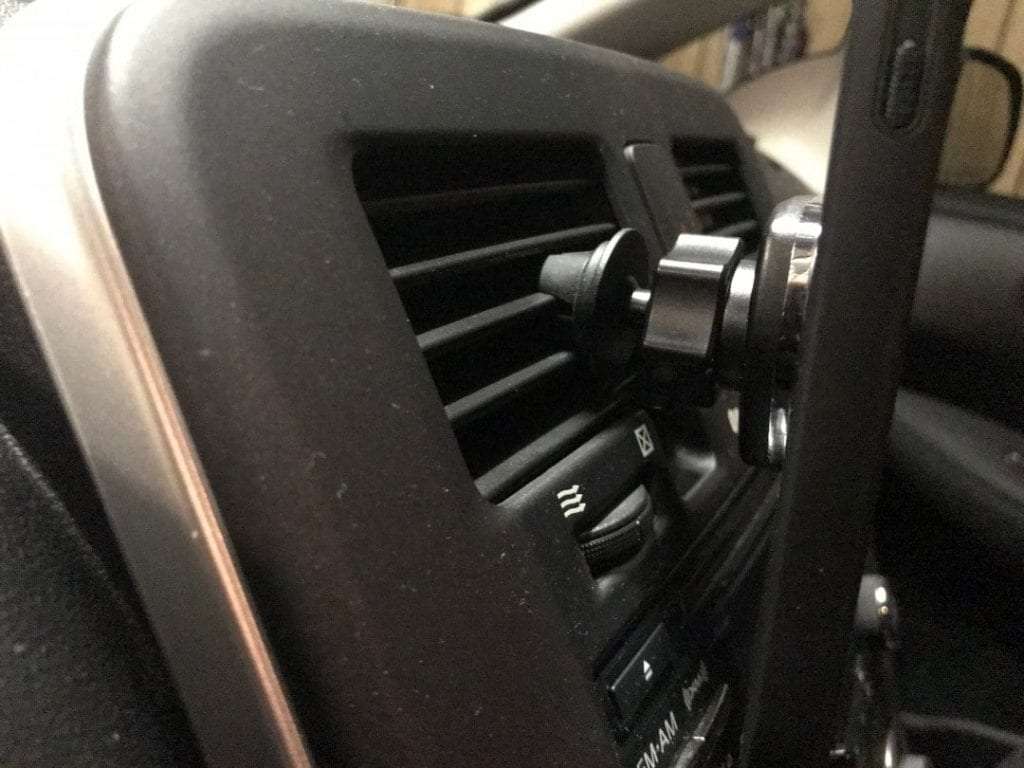 The 0.2-ounce plate coupled well with the 1.5-ounce vent clip.  The vent clip had four rubberized legs, with a cross cut into the middle.  I had to play around with the placement of the vent clip, to reduce the downward drag that the phone placed onto the unit.  Alone, the locking ring/clip held firmly to the plate.  However, when the phone was added to the clip, the downward force placed on the system caused the car vent to sag.  If you look closely at the vent clip attachment point, you will notice that there is roughly a 1/8 inch rim between the rubberized inner lip and the hard plastic outer ring. When I placed the vent clip onto the lowest rung of the car vent, the hard plastic ring rested perfectly upon the lower plastic of the dash.  With the vent clip fully seated into the car vent, the phone no longer caused sagging in either the vertical or landscape orientations.  The locking ring accommodated the 360-degree swivel ball very well and proved to securely hold the weight of the phone.  The lopsided semi-triangular shaped face had a soft rubberized surface with Naztech etched into it.  I was very pleased with the overall shape and feel of the magnetic vent clip, which also doubled as a phone kickstand. 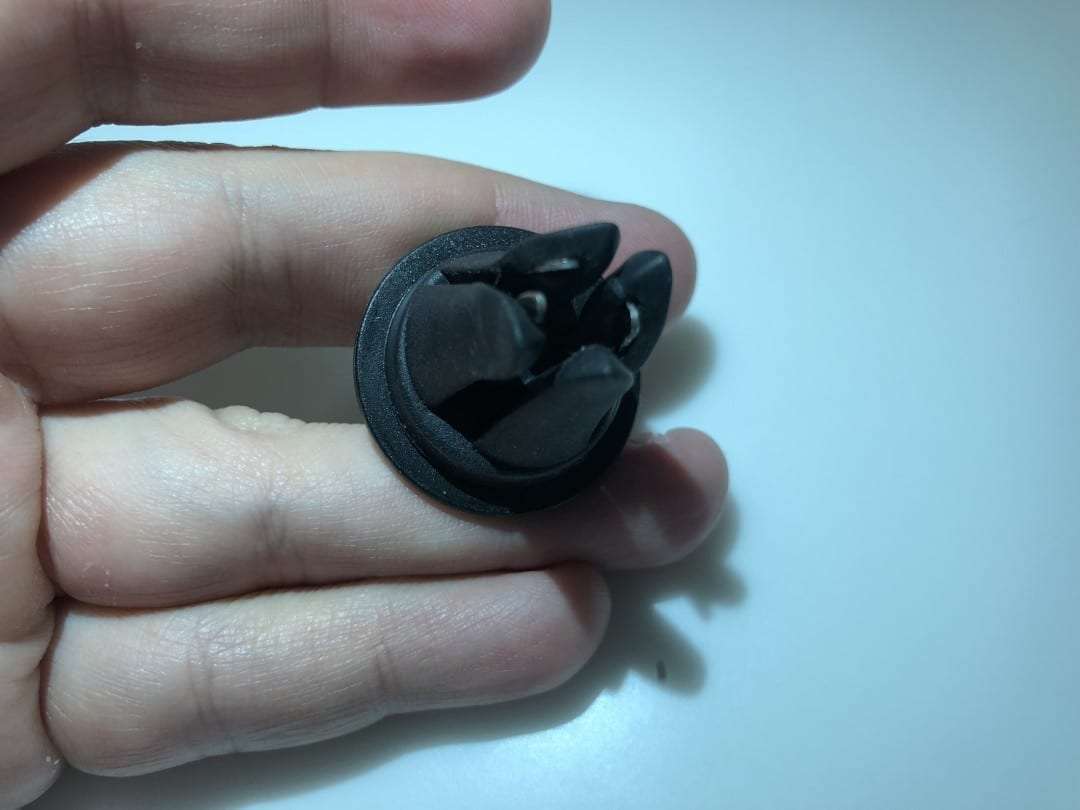 After I solved the sagging car vent problem, I placed my phone on the vent clip and enjoyed music/navigation and hand free use of my phone.  It was not until I tried to remove my phone that I found the second main issue with the vent clip.  The magnet was so strong that it pulled the entire vent clip out of the car’s vent.  The device stuck out 1 3/8 inches from the dash and it was difficult to slide my fingers behind the device to free my phone without also removing the clip.  After a few weeks of use, I found the third issue with the clip.  The rubberized legs worked incredibly well to secure unit to the car vent but started to loosen up and break down after numerous installations/removal cycles. I have read multiple reviews that stated that the rubberized vent holder legs would tear and break off, scratching up the vent/dash.  I have not yet experienced any scratches, but I did notice that the vent clips were starting to break apart.  I have mixed feelings about the vent clip but was excited to try the other mounting options.  The idea behind the clip was solid but the actual execution/utility proved to be less than ideal.  The metallic plates will allow you to use any of the Naztech magnetic mounts.