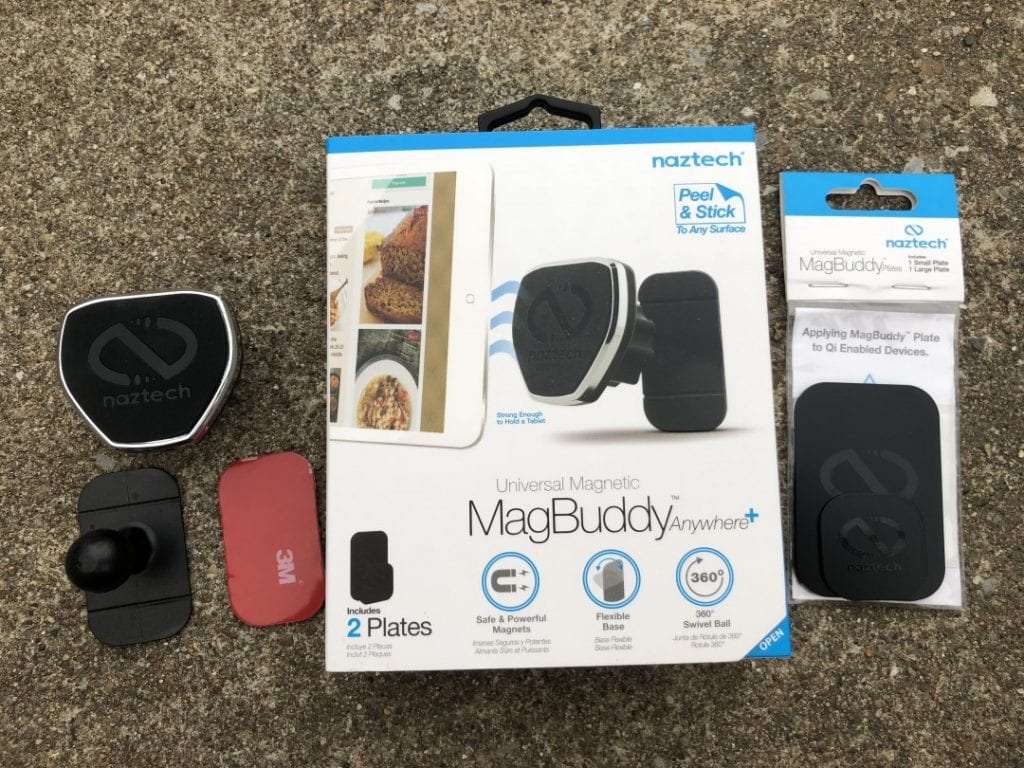 The Naztech MagBuddy Anywhere + allows you to mount your phone in style.  Combine the power of the MagBuddy Plate with a flexible base.

The catchy commercial jingle from the medication Detrol LA seems to summarize my life, as it seems that we have “Gotta Go, Gotta Go, Gotta Go, Right now.”  With three children aged nine, six and three, our life is never lacking something to do or somewhere to go.  With smartphones in hand, we tackle our day, drive to various locals and then arrive back home to ready ourselves for bed.  In life’s giant hamster wheel, it sometimes feels that we are living our very own “Groundhog Day.”  With such a busy lifestyle, simply setting my phone down is not acceptable.  I want a mount, I want a spot, I want a safe place to rest my phone.  Center consoles, cup holders, the dash, the floor, etc., simply are not safe enough for our modern expensive smart devices.  I had read about some magnetic attachment devices and wanted to give the magnetic system from naztech a try. 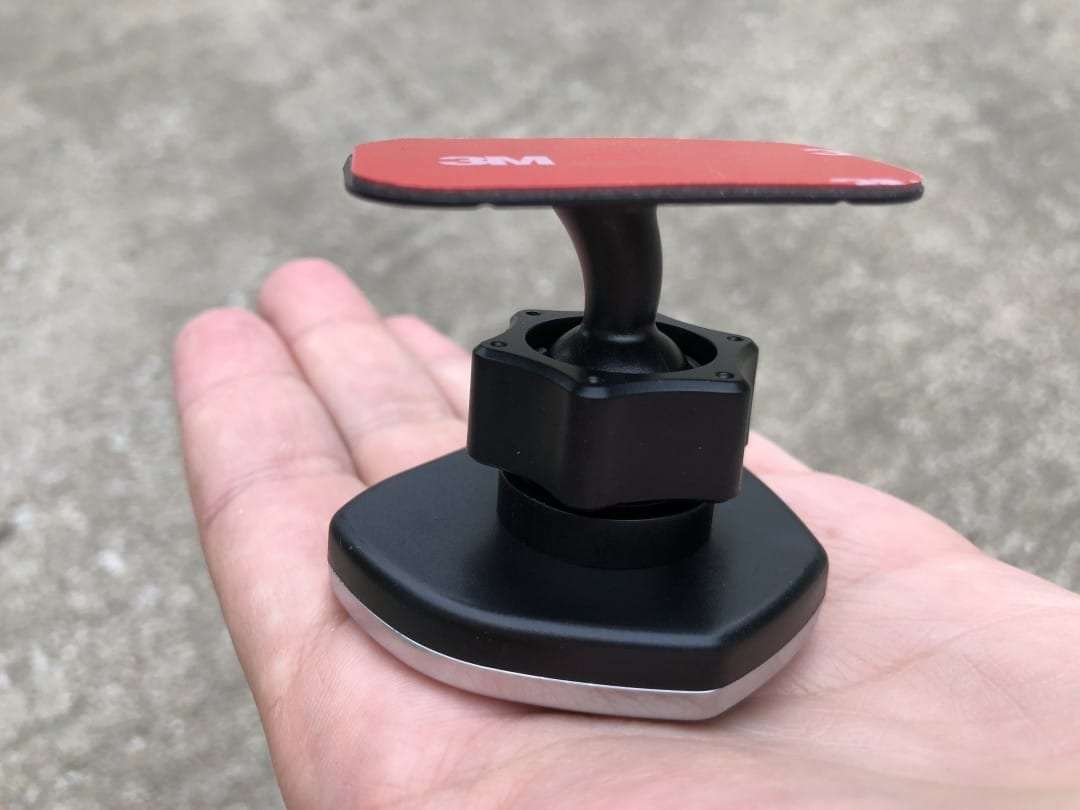 The MagBuddy Anywhere+ from naztech arrived in a 4 1/2 inches wide by 5 1/2 inches tall by 1 5/8 inches thick retail box.   The MagBuddy product line does not suffer from lack of thought in the packaging.  The cover displayed an attractive photographic quality, raised, glossy image of the semi-hexagon shaped magnetic charger and flat black base.  Using blue wavy lines, akin to temperature markings on some pictures, I was able to get a feel of the attraction of the white colored smart device to the magnetic base.  Along the bottom of the cover, naztech provided 4 icons detailing the two metallic plates, safe and powerful magnets, flexible base, 360 degree swivel ball.  If you rotate the packaging ninety degrees counter clockwise, you will find a helpful installation/instruction panel in English/Spanish/French.  The panel detailed the ability to place the metallic plate behind the case, behind the battery case, directly to the outside of a phone case or to the backside of your phone.  I will talk more about the placement of the metallic plate below as the plate placement makes or breaks the experience.

The back panel provided four blue circular icons with written trilingual descriptions.  The included two adhesive MagBuddy Plates can be installed onto a phone or tablet.  You can mount the Anywhere+ device  to any flat surface, it is bump resistant, heat/cold resistant and has a 360 degree swivel ball.  The reverse face further described the installation instructions, which were very straightforward.  Essentially, clean the surface of interest, allow it to dry, remove the adhesive backing, firmly place the sticky end to your desired surface and enjoy the magnetic attachment.  The bottom panel was rather cluttered, displaying the product UPC code, a QR code linking to their website, “An American Brand,” and their copyright information.  If you return to the front cover, lift up the magnetic flap and enjoy a direct view of the product.  With a variety of option sin the MagBuddy line, you can see if this is the type of device that would work for you.  Three icons adorn the blue lower rim detailing the quick install, flexible base and again telling the user that there is a swivel ball.  The inner flap was beautifully constructed, with dual glossy raised images of the device in two different locations. 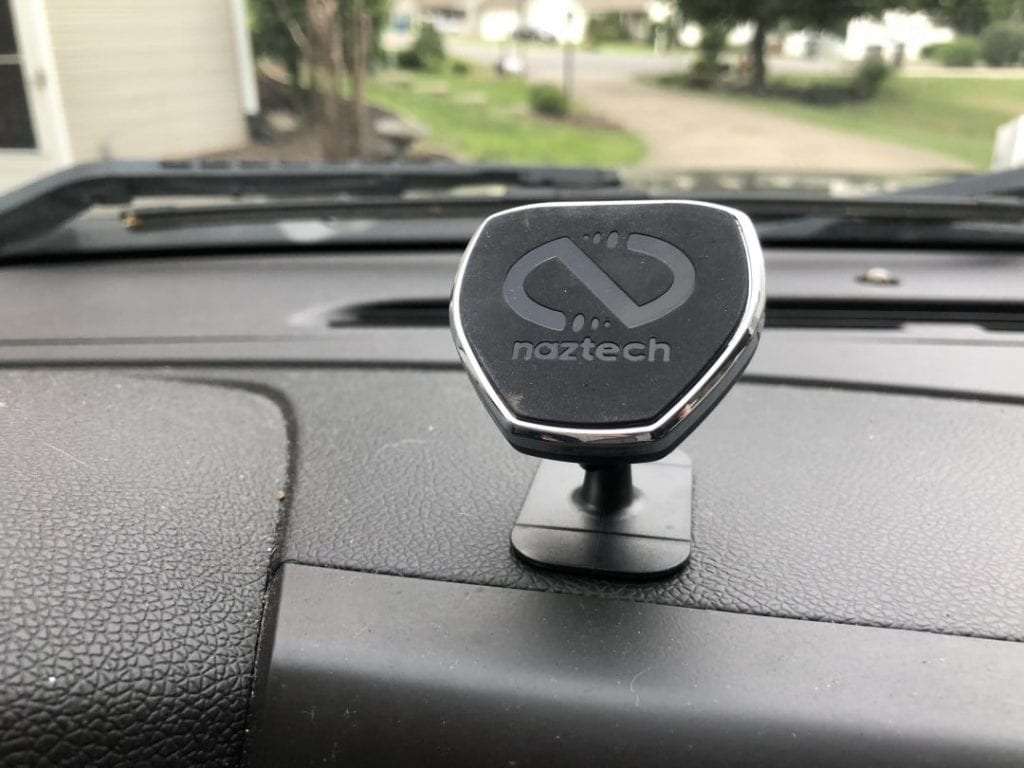 Removing the product from the packaging, you will find a thin plastic tray housing the naztech device.   Beneath the tray, you will find a separate plastic bag containing the 1 7/8 inches wide by 2 1/2 inches tall large plate and the 1 1/4 inches wide by 1 1/4 inches tall small metallic plate.  The instructions to install the MagBuddy Plates were conveniently located inside of the plate bag. The instructions recommended to install the plate in the middle of your device, which would allow you to enjoy both vertical and horizontal viewing.  I had originally placed the small plate just above the word “iPhone” on the back of my iPhone X Catalyst Waterproof Case.  Initially this provided the best position for grip and allowed for wireless charging.  If the plate was placed just below the Apple logo, the iPhone X would not wirelessly charge.  As noted above, the plate heated up hot enough to burn my hand and I dropped my phone.  No damage befell my device and I was only superficially hurt.  Either way, if you are wanting to use wireless charging for your device, I would consider putting the magnetic plate onto a removable case for travel and remove the case to charge wirelessly.

I was excited that this device had the flexible base, as it was designed to better cling to rounded surfaces like the dash or door of my car.  I am not a fan of clutter and I do not want the distraction of my phone in the middle of my field of view.  So, I typically utilize my cars air-vent as as gripping surface.  Similar to GPS units and Dash cams, this device can attach to your inner windshield.  The flexible base also will allow you to open new locations, such as your center console, or car door.  Add this to the ability to stick to flat surfaces like a wall or counter, or to a desk and you can begin to see why they call this device the Anywhere+.  I did like that this was powerful enough to hold a tablet.  My wife uses a magnetic clip on our iPad Mini for recipes and attaches the base to the wall.  She liked that it was possible to rotate the iPad and view the tablet horizontally. 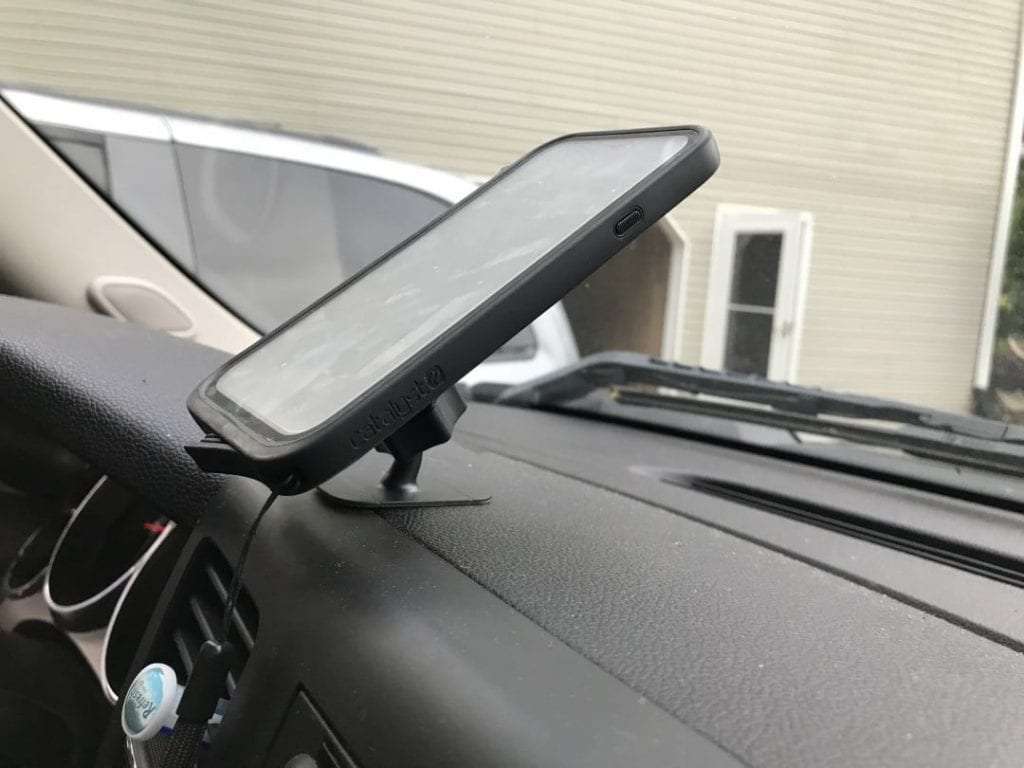 The naztech mounting options should provide for nearly every situation.  I like the tech, the swivel ball, the magnetic bass and the metallic grip plates felt very well made.  The magnetic connection proved to be incredibly strong and resilient.  Alas, this system will not work for my given situation.  I like to charge my phone wirelessly and the metallic plate became dangerously hot.  I tried multiple positions, tried multiple Qi charging discs (Samsung, Ventev, Choetech) and the metallic plate seemed to heat up with all of them.  The conclusion is the ferrous plate, when placed into a magnetic field heats up and can burn you or potentially damage your phone.  The back of the newer cases are glass and not metal for this reason.  I found that the adhesive will allow for a single attachment and from multiple reviews that I have read, will only last a few months.  I have been pleased with the strength of the adhesive and the ability to hold my phone to the dash of my Chevy Silverado.  It has been a solid two weeks and the adhesive has not budged.  I did end up removing the plate from my phone, however, as I missed the ability to wirelessly charge my phone.