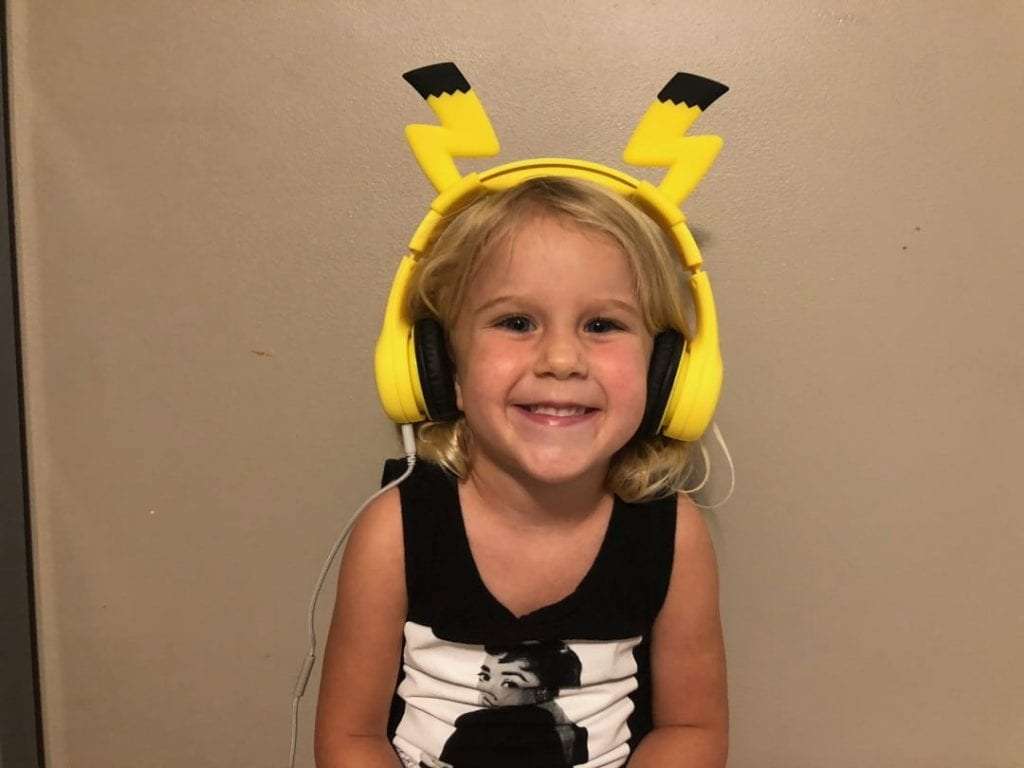 Protect their future hearing with the decibel regulating Volibolt headphones from Mumba.

I know I am not the only parent that has to regularly remind their children to turn down their electronic device. This becomes even more frustrating when I allow my three-year-old daughter to watch a movie on Movies Anywhere.  From out of nowhere, Elsa will blast “LET IT GO” or Moana will scream “I’VE BEEN STARING AT THE EDGE OF THE WATER” and we need to tell her to turn it down.  We have not allowed her to use headphones due to the concerns for hearing loss with loud music.   When I heard about the decibel regulating technology from Mumba, I was excited to have a headphone option for my children that followed the current OSHA guidelines of <85dB sound exposure.  My wife and I limit screen time as much as possible and use educational apps like ABC Mouse.  This device promised to be quite helpful. 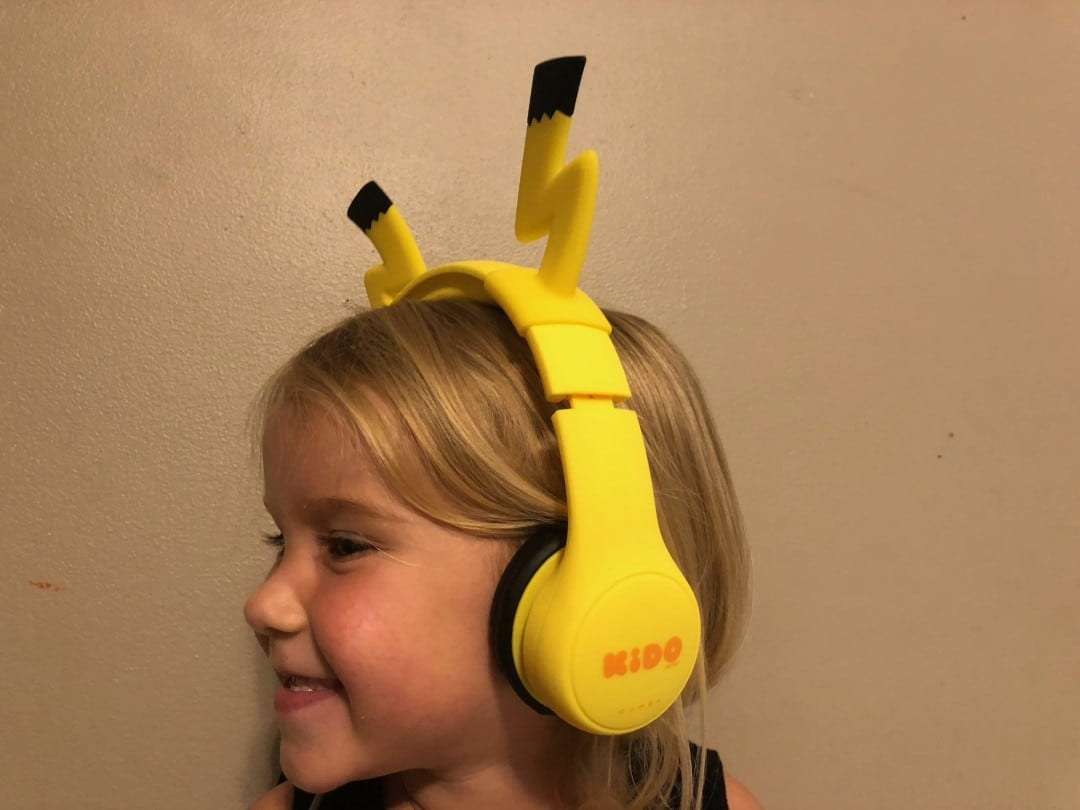 The Mumba headphones arrived in a 6 3/4 inches long by 5 1/2 inches wide by 2 1/2 inches thick retail package.  The design provided a fun, childlike moon/planetscape with stars hanging within the upper outer space panel.  Through the clear window, I was able to directly visualize the Pikachu ear headphones. The left and right panels continued the space theme with the black opaque panel, yellow stars, and yellow/white MM logo.  The black colored posterior panel proved to be a very useful canvas for the yellow font.  The “Kids Headphones” were designed specifically with child safety in mind.  The packaging noted that the headphones had a built-in volume control for decreased risks of hearing damage, a detachable 3.5mm nylon braided audio cable, 85dB maximum sound, adjustable headband with comfortable, soft ear cups, multiple device compatibility and was designed for children over the age of three-years-old.  Below the bullet points, Mumba provided four helpful points of information: wear the headphones on the correct ears, do not use for children under the age of 3. avoid using while riding a bike or using equipment, the in-line microphone can be used to answer/hang-up calls.  Lastly, below the yellow square, we can learn about the 40mm driver size, 82+/-3db volume, 20Hz-20kHz frequency, 1.2m cord length. 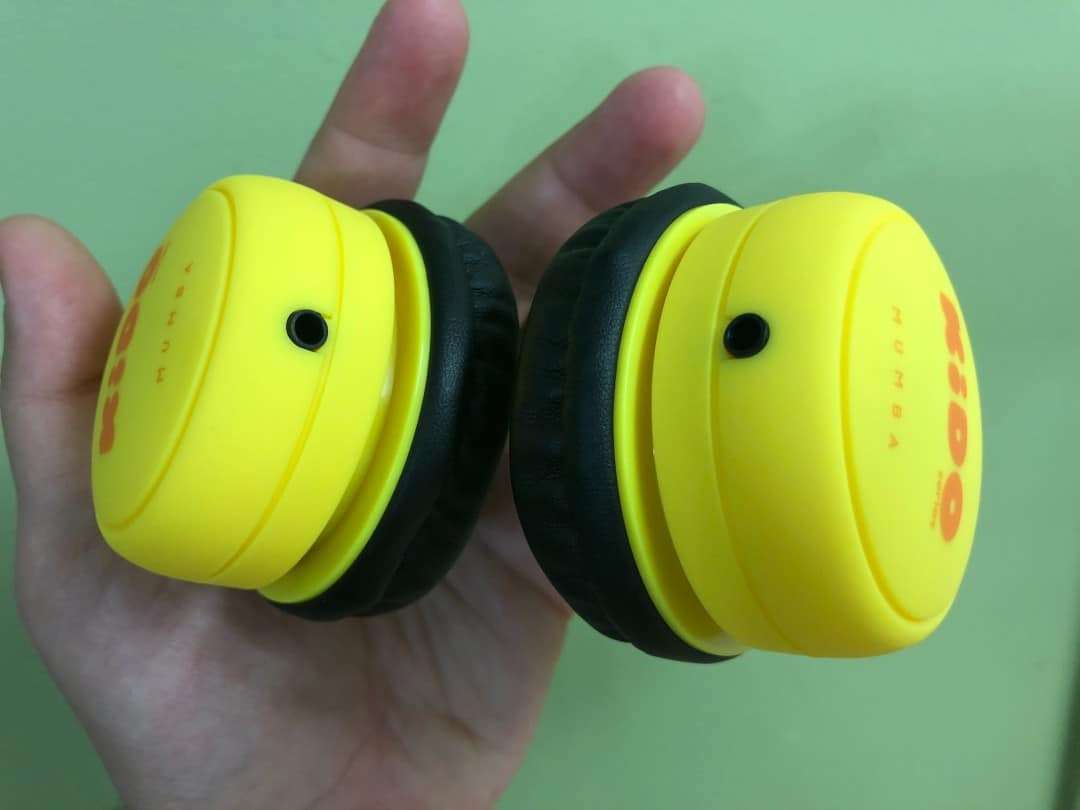 Within the packaging, I found a pair of headphones that reminded me of a hat you would buy from Disney.  The yellow earphones sported a pair of lightning bolt Pikachu ears across the top, a 3 3/4 inches wide soft foamy headband, and 2 1/2 inches diameter black soft ear cups.  Along the backside of each of the earcups, I found “Kido series” and “Mumba” in orange.  Initially, I thought that the earphones could be easily oriented, using the small L and R along the inside edge, just below the hinge.  However, for a child under the age of five, the small letters were not helpful for my three-year-old daughter.  I would have preferred there to be a color difference between the left/right earcup for orientation.  This could have been hidden within the foam of the earcup or even along the bottom of each of the earcups, near the 3.5mm port.  Thanks to the flanking hinges, the headphones were able to assume an even more compact size and could be folded out for easy listening.  Each hinge extended up to 3/4 inches and made the headphones ideal for my three yr old, 7-year-old and 9-year-old children.   Before you throw away the packaging, make sure that you remove the 2 3/16 inches wide by 3 3/4 inches tall Thank You/Product registration card and the individually wrapped 51 inches long 3.5mm x3.5mm woven silver cable.  The only cable orienting feature was the 1 1/16 inches long by 1/4 inch diameter in-line microphone, which was located  6 1/4 inches from the end of one fo the 3.5mm jacks. 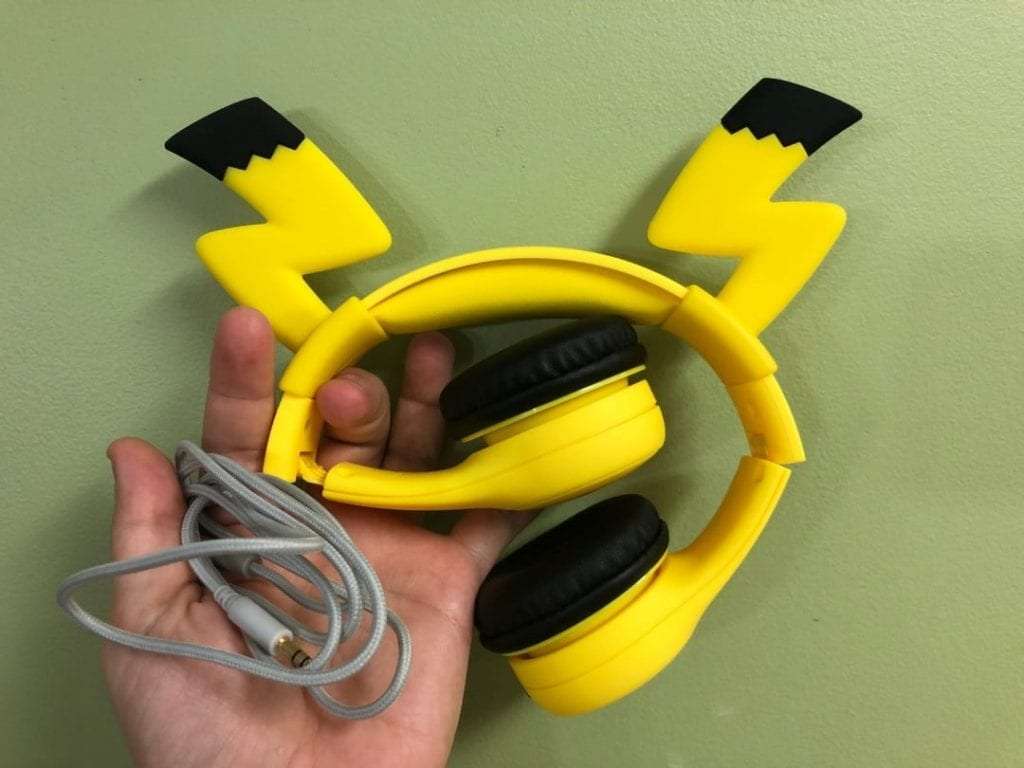 To use the device, plug the 3.5mm port, closest to the microphone, into either end of the headphones.  You can then plug the other end of the 51-inch long cable into your device of choice.  To test the device, I used the 3.5mm port located on my iPad Pro 10.5.”  To use this device with an iPhone 7/7+, iPhone 8/8+, or iPhone X, you will need to utilize the 3.5mm-to-Lightning dongle that was included with your device.  I navigated to Audiocheck.net and utilized the Low-Frequency Response and Subwoofer Audio Test (10-200 Hz), High-Frequency Response and Hearing Audio Test (22-8 kHz), the Left/Right Stereo Audio Test, the “Original Binaural Recording” within the Stereo Perception and Sound Localization. If you want to startle one of your kids, put the headphones over their ears and activate the Stereo Perception and Sound Localization test.  I would be surprised if they did not look over both of their shoulders during the test.  The headphones provided audible sound from 30Hz to 15kHz, which falls within the range of human hearing.  The packaging promised 20Hz, but it simply was not evident through my testing.  The upper range was heard at 16Hz by my 3/7/9-year-old children, which was reasonable.  I did use my traditional test tracks but was unable to fit the headphones properly on my head due to sizing.  Placing the Pikachu ears behind my head, I listened to Holly Cole “Train Song,” Cee Lo Green “Bright Lights Bigger City,” the Gladiator Soundtrack and the Far and Away and Braveheart soundtracks.  The tracks were reasonable at 50% iPad volume all the way up to full.  If I had to relate the sound level of the device, it felt like I was listening to other headphones at ~1/2 to 3/4 power.  I tested a variety of songs with the Decibel X App and found most of them to consistently register <85dB.  Utilizing a Google search, I wanted to see which song had the loudest decibels.  Multiple web pages stated that the best song for my test would be “Welcome to the Jungle” by Guns N’ Roses.  The Decibel X app registered a few readings up to 90 dB, which was a little disconcerting.  Regardless, the few spikes above 85dB will likely provide no negative lasting effects. 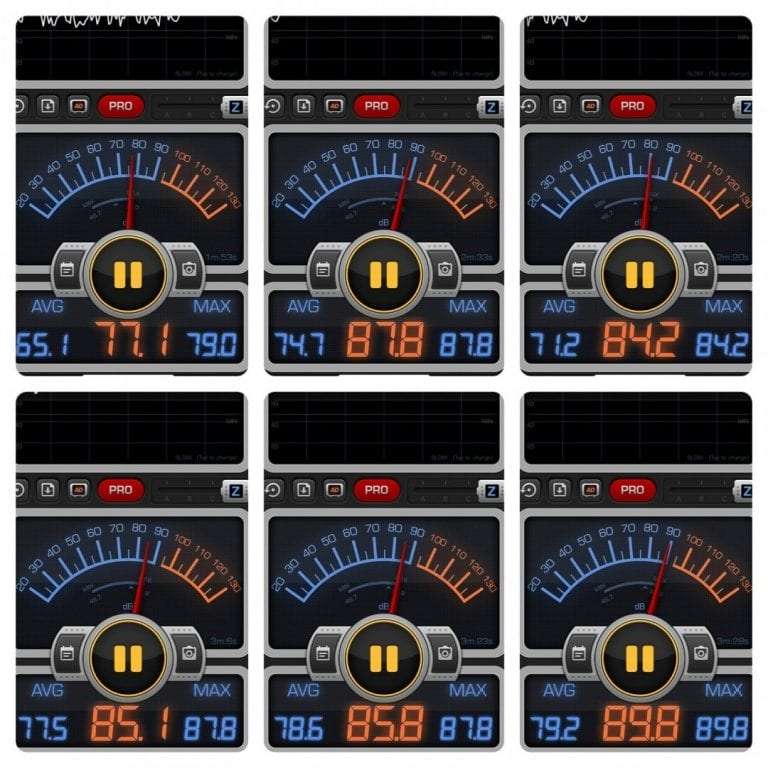 Turning to the Greatest Showman Soundtrack, the Decibel X app registered 87.8 dB, 85.1 dB, 85.8 dB, and 89.8 dB (max) throughout “THIS IS ME.”  These spikes were rare and were only found at the volume apex on my iPad Pro 10.5.”  Keeping the sound at ~1/2, the sound was pleasing and registered in the 40-60 dB rating.  I was able to hear sound in a quiet room while listening at 1/4 iPad Volume.  Below this mark, the sound was very hit/miss.  During my testing my 3-year-old walked in and said “Can I play, I want to wear the Pikachu” and my review became hijacked.  I allowed her to watch her favorite movies Frozen and Moana with these headphones.  I used the Decibel App, turned the volume up and noted that the volume fluctuated in the 80dB range but did not exceed 85dB.  I turned the movies on and walked away knowing that there was little chance that she would harm herself by increasing the volume.  The most important aspect of these headphones was the shareport on the second earcup.  This feature was not mentioned on the packaging and without any included product manual, was not that obvious.  I happened to have another pair of wired earphones and wondered what would happen if I plugged them into the second 3.5mm port and found that there was a passthrough feature.  Now, two of my children can watch the same video.  Imagine my shock when I discovered this feature.  I had previously tested the iclever Boostcare headphones and felt that they were better than the Mumba headphones.  However, this feature separated the Mumba headphones from similar devices on the market. Throw the 3.17-ounce headphones into a purse, a backpack and enjoy a safer-for-them listening experience.

Navigate to the Mumba Store on www.amazon.com to learn more and to peruse their products.