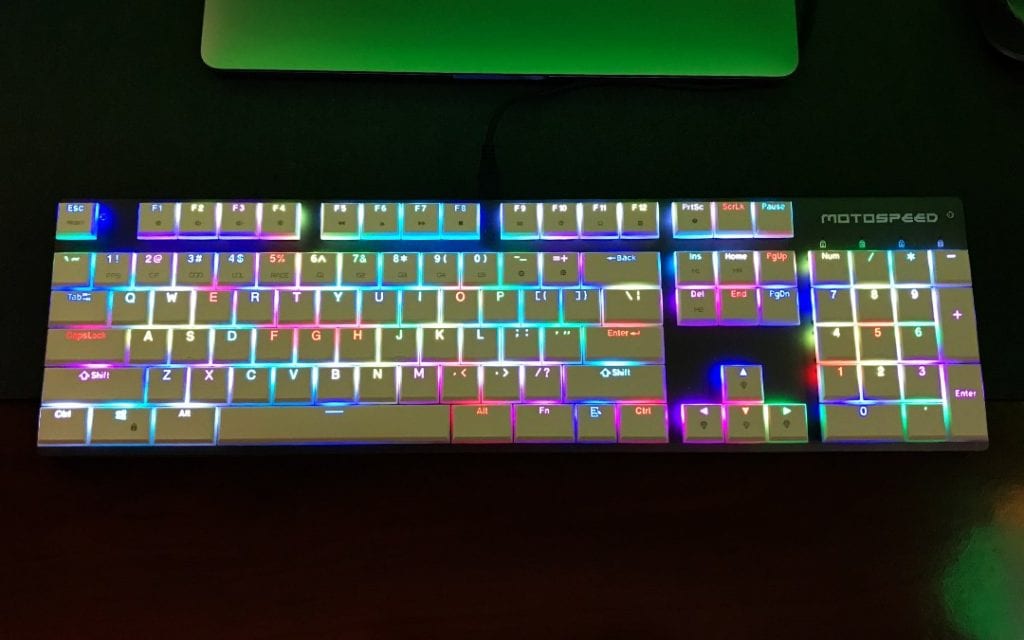 A colorful keyboard option for those who like clicks.

I’ve had a fascination with mechanical keyboards since I got my first one a few years ago. They are fun to use for just about any task but are specifically designed for gamers who tend to need a keyboard that is just a bit more sturdy than the typical membrane keyboard. I am not a ‘gamer’, but I really enjoy the feel of a mechanical keyboard for typing. So, when I was given the opportunity to try out the Motospeed CK94 Slim Mechanical Keyboard, I couldn’t pass it up. The simple fact that it’s a ‘slim’ keyboard with mechanical keys was intriguing enough for me to check it out.

The Motospeed keyboard has a full 104 keys including a number pad. It supports 14 different types of RGB backlight styles. It is a wired keyboard using Micro USB to USB as its connection method with USB 2.0 speeds. The keys are anti-ghosting and have a response speed of 1ms. The CK94 features the Kailh Short Switch, which was designed to mimic Cherry switches. The keyboard is made from ABS and metal and has a lifespan of 80 million keystrokes. The keyboard is actually quite portable (it fit into my backpack) weighing only 2.2 lbs. The keyboard ships with a user manual and one Micro USB cable for connection to your computer. 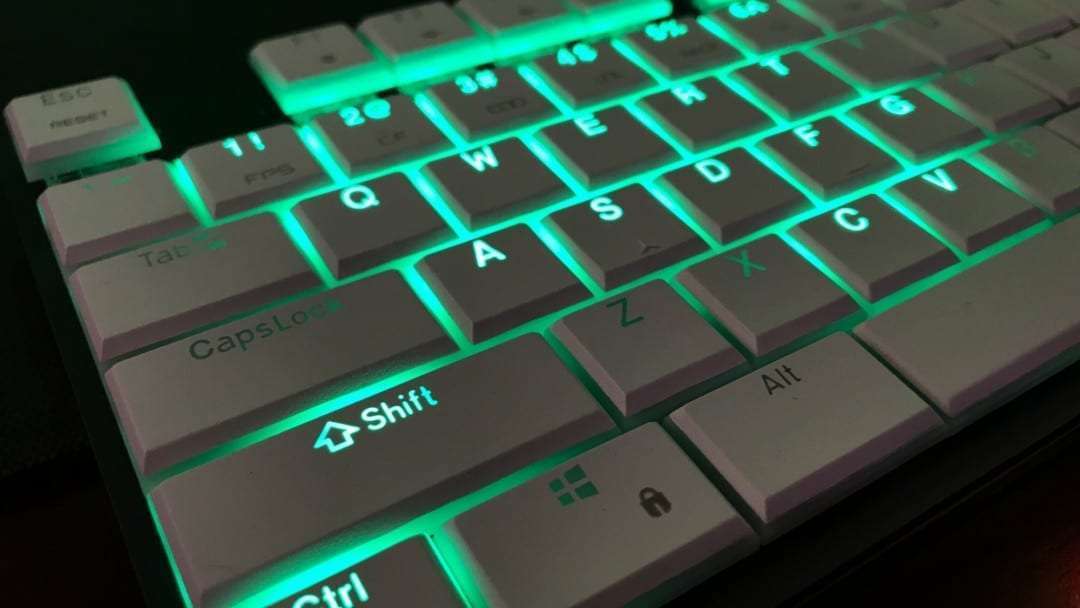 The keyboard arrived packaged inside a black box with the Motospeed logo embossed in metallic orange on the cover. The words “Live for games” was also printed on the front. Aside from that, there was a simple yellow product information sticker on the back. This contained details about the product (listed above) in both English and Chinese languages. There is also quite a bit of company information including a phone number and website.

When I opened the box, I found the keyboard wrapped in a white non-static wrapping with styrofoam pieces gripped to the edges so that the keyboard wouldn’t move around in the box. I thought this was a good way for the keyboard to be shipped to consumers. In addition to the user manual and USB cable, there was also a key puller packaged in the box with the keyboard. This is always handy for mechanical keyboards to be shipped with so I was happy to see it included. 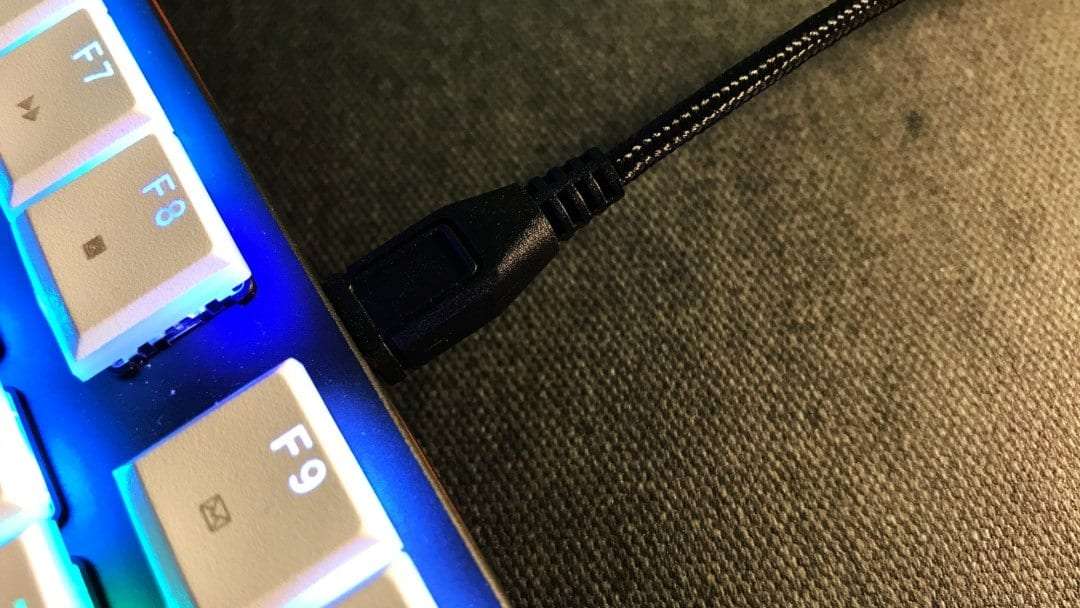 When it first realized that it was connected to an appropriate power source, the CK94 lit up with an impressive RGB light show sequence. I do love the variations of light sequences that the CK94 presents. You can cycle through those variations by press/hold Fn and tapping Ins for each different color option. You also have the option of adjusting the brightness or color direction by press/hold Fn and then tapping the arrow keys. You also have the option to use the preset custom color combinations by pressing Fn and one of the number keys (1-5) and then you can program 6-0. Speeds are controlled by Fn and +/- keys. 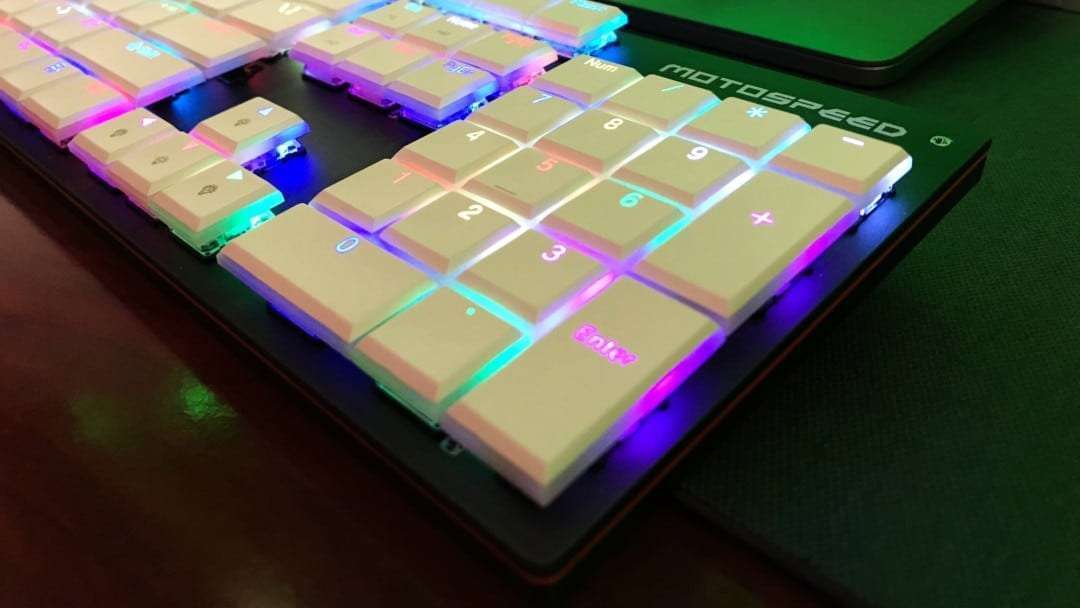 As far as typing goes, I found the response time to be very good. I did find that I had to press the keys a bit harder (maybe 10% harder) than my native MBP keyboard with butterfly keys. The CK94 has a great feel to it and I was surprised at how mechanical it does feel considering it’s a slim style keyboard and this is my first foray into a slim mechanical keyboard.

One of the things I really like to do when I test keyboards is to run a simple typing test using the test keyboard and then my MacBook Pro as the control keyboard. Using a simple test on typingtest.com, I found that I had an adjusted typing speed of 56 WPM using the Motospeed CK94 and I hit 59 WPM using the MBP keyboard. I wasn’t surprised by this result, but I did expect to be a little faster with the Motospeed than I was. 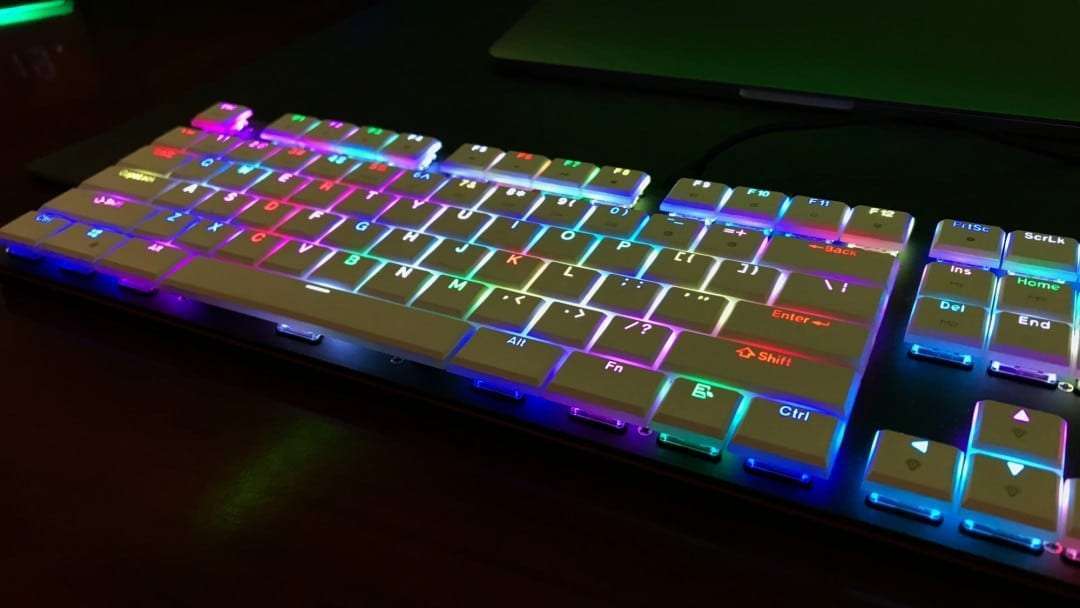 The Motospeed CK94 is a very nice mechanical keyboard and especially nice for minimalist set-ups. I love its slim profile and was very impressed with its LED light show. My only real issue with it was that it was a little too clicky for my taste. I really like the softer feel of some mechanical keyboards like the SteelSeries Apex M800. It’s a very large keyboard though and not right for this set-up. If the CK94 didn’t have the number pad, I think it would perfect for me. It’s a great keyboard though and very affordable coming in under $100.