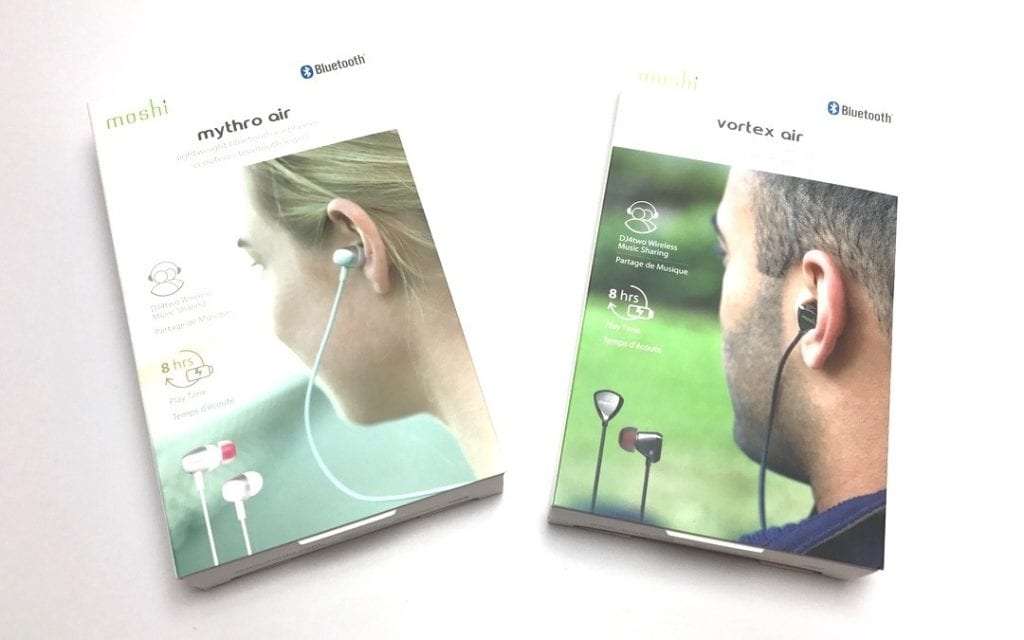 Lightweight wireless earphones allow you to share your listening experience with a partner.

My wireless earbud experiences usually end up being hit and miss. I have issues with them fitting my ears correctly (as I explain below) and sometimes the built quality just isn’t there for me. Moshi recently released two new sets of wireless earphones — the Mythro Air and the Vortex Air — that are based on previously wired headphone models of the same name. Each set of earphones has their own unique listening experience and now you can pair them with each other through Moshi’s DJ4two feature.

Mythro Air
These gorgeous headphones provide a very nice, full sound. They feature an anodized aluminum design that is both ergonomic and compact for comfort and storage. The headphones have DR8 Neodymium drivers (15 Hz-20 kHz / -10dB@1kHz) and an integrated microphone with an in-line 3-button remote. Like it’s twin (Vortex Air), the Mythro Air earphones allow for DJ4two to be used for a shared listening experience. I will describe that a bit more below. 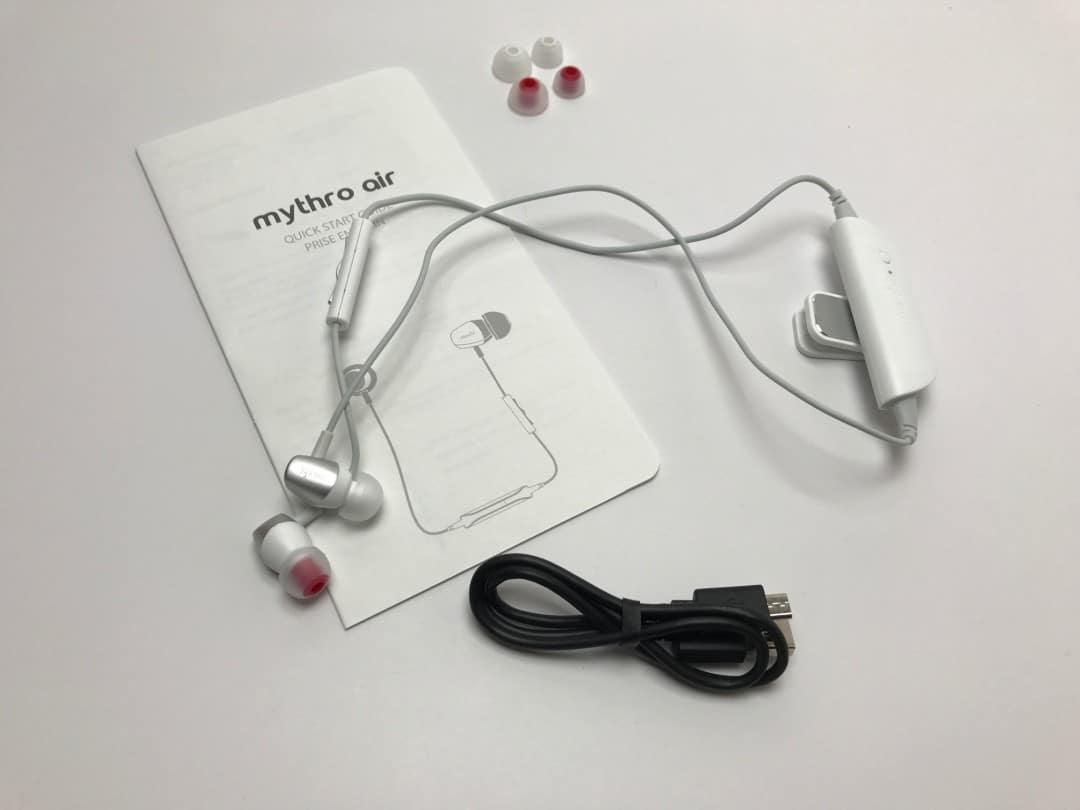 The build quality of these headphones is like a work of art. They are wireless, but not true wireless. There is a cable that extends between the two earpieces, but not one that connected to a mobile device. The Mythro Air comes with three pairs of ear gels for fit and comfort purposes. Everyone has different ear shapes so it’s important to take the time to find a good fit. Changing out the ear gels is little tough on these particular headphones. I found that when pulling a set off, you have to use a bit of force. They pop onto the earpiece much easier than they come off.

I sometimes have issues with standard earbuds and them slipping out of my ears. Apple’s EarBuds don’t give me that problem — even when I’m being active. I have found the Mythro Air earbuds to fit my ears much better than most sports/wireless headphones. They are easier to situate in my ears and they stay put. After an extended period of time, my ears do start to ache, though. My point is that if you are like me and sometimes have issues with earbuds, you may want to give the Mythro Air a try because they fit better than most I’ve tested. 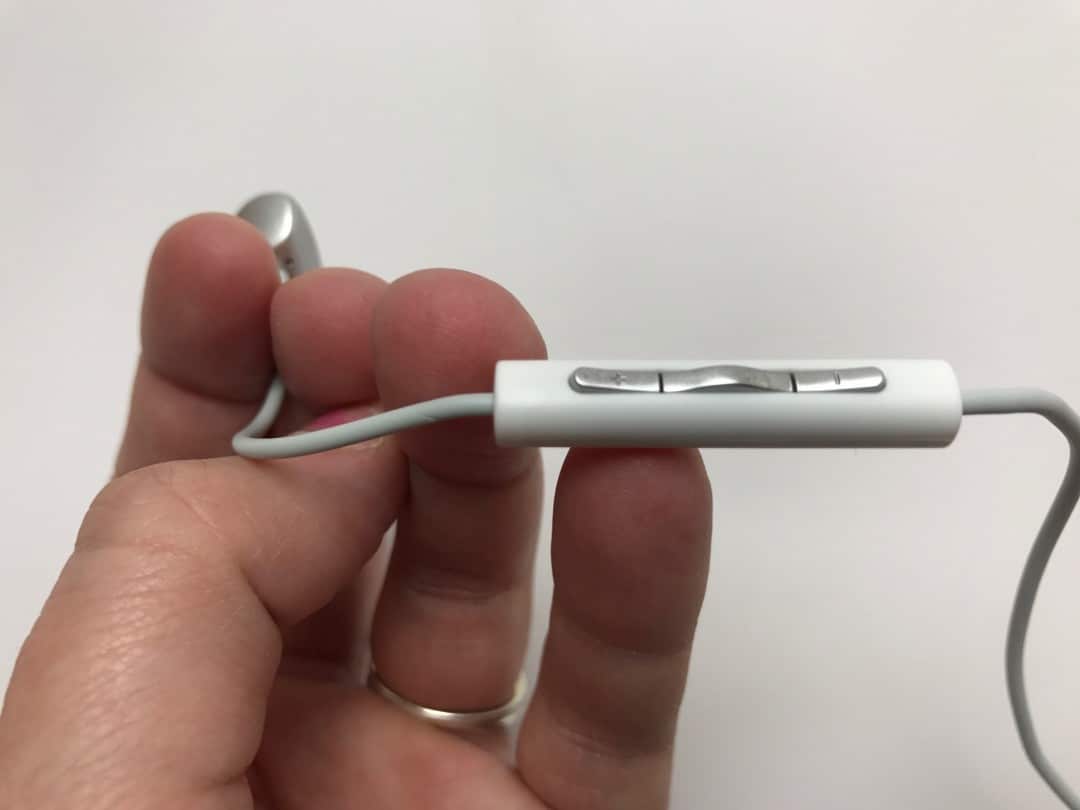 Moshi includes a magnetic clip with the headphones that allow you to secure the device to your clothing for easier use. I rather like this option because the headphones have a rather sizable power module in the center of the cable. While it makes it easy to power your headphones on and off, it’s a little heavy and weighs down the earbuds. When you clip it to your clothing that weight is evenly dispersed and you no longer feel the pressure in your ears. 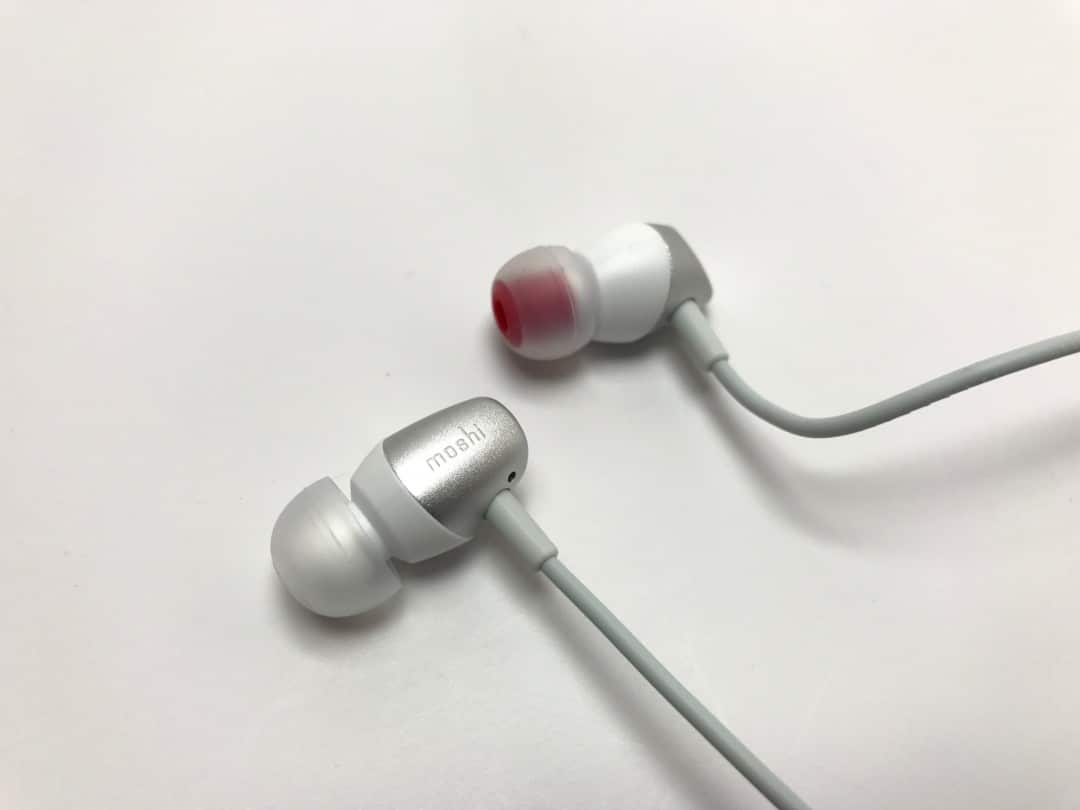 Because I get a better fit with the Mythro Air wireless earphones than I do with other earbuds, I’ve found that the sound quality if far superior to other wireless earbuds. The sound is rich and full and I have found myself using these for more than just active situations. They do give a certain amount of noise canceling/reduction for your surrounding area. I believe this is because the earbuds block your ear canal from any other sound signals, but it’s still a nice feature of the earphones.
BUY FROM AMAZON

Vortex Air
The Vortex Air are sort of the twin to the Mythro Air earphones. They have a similar design in that they have a power unit in the center of the cable that connects the two earpieces and a magnetic clip that will hold it to your clothing. The earpieces actually look very different. The Vortex Air have a RigidBody steel alloy construction to deliver deep, clean bass. The earphones feature high-definition HR8 Neodymium drivers with extended range. At full charge, the battery should give you about 8 hours of playtime (on 50% volume). Like the Mythro Air, the Vortex also has a 3-button, inline controller on the cable. 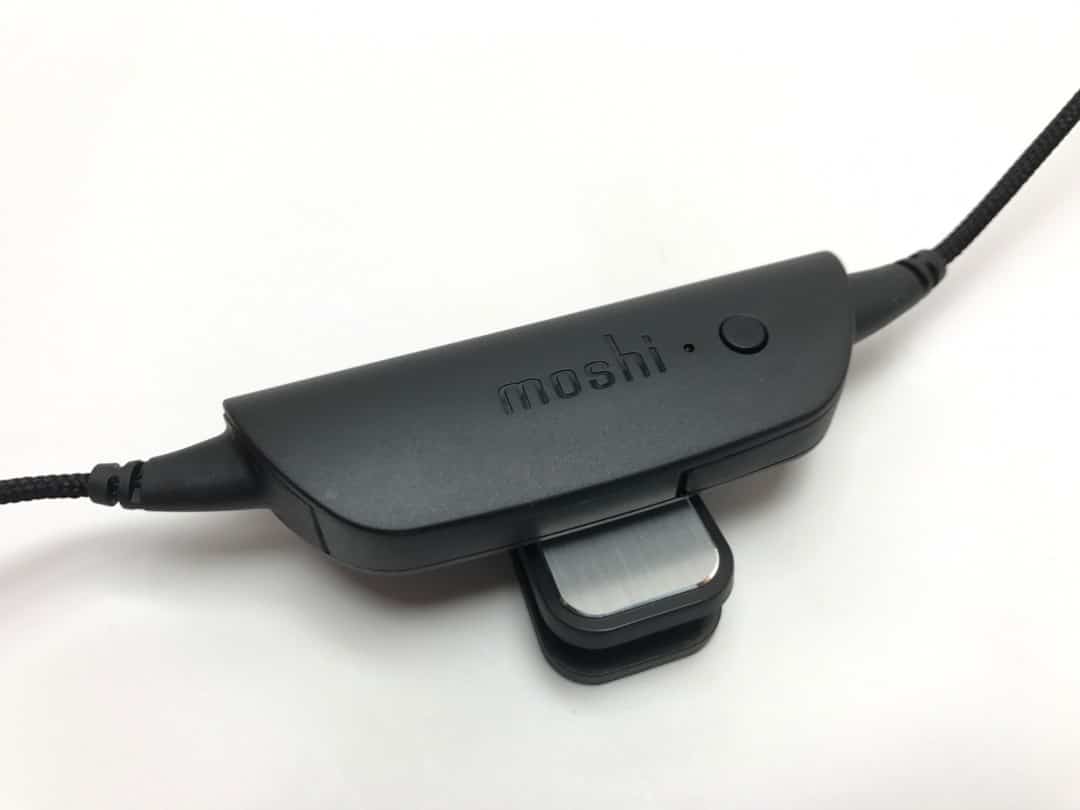 With the Vortex Air, I ended up having the same ‘fit’ problem I tend to have with other earbud-style headphones. When I first put them into my ears, I felt a tight seal but found them to slip out little by little. I also found the Vortex Air to have a little more of a hollow sound than the Mythro Air. Again, I believe this has to do with the fit of the earpieces in my ears.

The design of the Vortex Air feels a little more masculine than the Mythro Air. They come in one color — Dark Steel. I had the same basic issues with these as I did its twin. The ear gels were a tight fit on the ear pieces. They were hard to slip on and off. And, just like the Mythro Airs, I really like the magnetic clip that is included. I feel like it takes the weight off the earphones and this helps them stay a bit more secure in my ears. 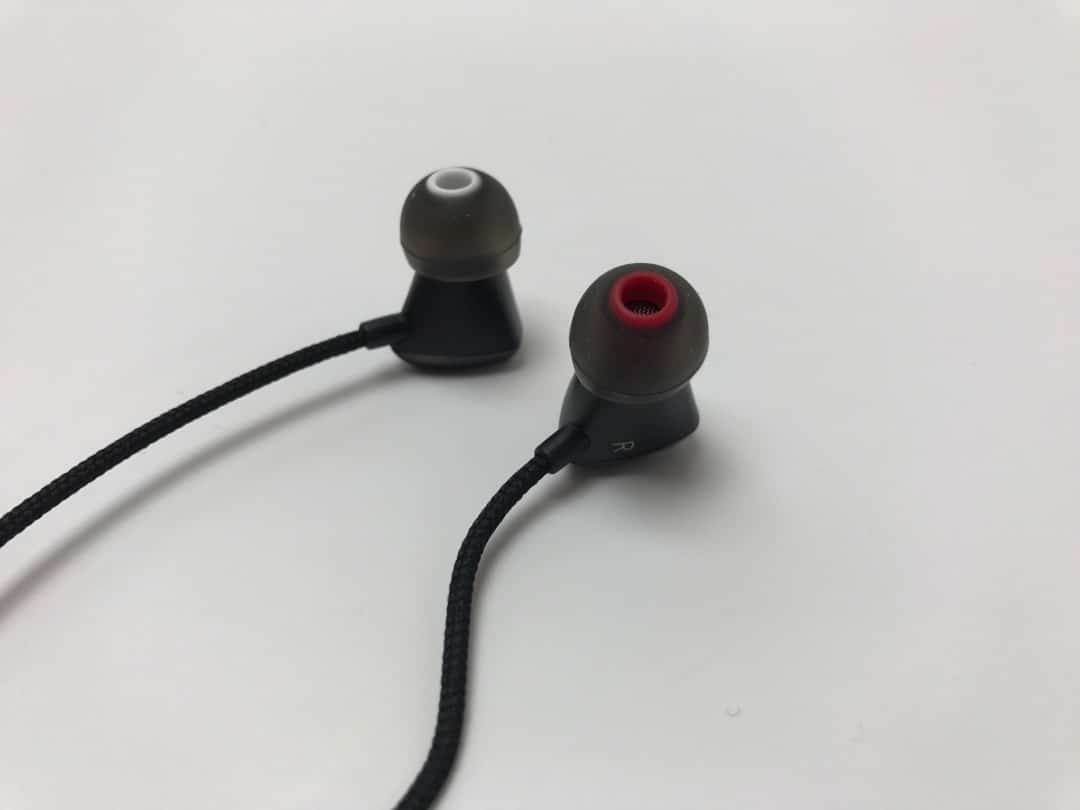 All in all, they Vortex Air have an awesome build to them. I think if they fit your ears well then you will really like them. I can only classify them as ‘average’ since they don’t work the best in my ears. One big difference between the Vortex and Mythro earphones is the cable that holds the two earpieces together. The Vortex has a corded fabric cable and the Mythro Airs have a more traditional silicone wrapped wire. Both function the same way, but the Vortex Air’s cable is a little more flexible.

Moshi Bluetooth App
So, what happens when you take two average/above-average wireless earphones and connect them to a custom app just for them? They become exceptional. Moshi has designed an app to specifically work with their wireless headphones — Moshi Bluetooth App. It’s a free download and available for iOS and Android devices. The app allows users to take advantage of the DJ4two functionality that lets friends share music from one device. It’s actually quite a remarkable feature and one that should be used.

As cool as the DJ4two feature is, one of the reasons I LOVE this app is because it has an equalizer in it. It comes with some presets, but you can customize your own sound preferences and save them within the Moshi app. The app will also provide a display that includes the available battery on the headphones. You can set an alarm to alert you when the battery life is low and you can also change your device’s headset name.

To use the app, you simply power your headset on. The earphones will be automatically detected by the app and you can connect them to the DJ4two feature or start customizing your listening experience. One thing I noticed is that if you simply connect to the headphones and start playing music on your mobile device, you won’t have the equalizer options available in the app until you open the app. I was using the Vortex Air earphones and thought the sound was flat and hollow until I opened the app and used the Bass Boost equalizer preset. It really made the quality of the audio sound much richer.

The DJ4two feature is really pretty awesome. As I mentioned the app automatically detects the Moshi Bluetooth headphones in range. Under the DJ4two function, you can connect to a set of BT headphones without connecting them through your phone’s Bluetooth menu. Let’s say the Mythro Air are the earphones that I have paired to my phone as my primary headphones. Then, I have a friend that comes over to take a walk with me. She has the Vortex Air earphones. All I have to do is open the Moshi Bluetooth App, select DJ4two, and have her power on her headphones. Once her Vortex Airs are powered up, all she has to do is double tap the power button and the app sends the audio signal to them. Voila! My friend and I can go for our walk and be able to share our favorite music. The few times I’ve used this feature it’s worked flawlessly. I think it’s a really monumental innovation in wireless headphone technology. It’s really been something I’ve wanted access to for quite some time.

Summary
Moshi is a brand that exudes quality with everything they make. I’ve turned to them on more than one occasion for products like bags and chargers, but their headphones have not been something that I’ve really pursued. That opinion has been changed with these two models of earphones. The Mythro Air are a bit lighter than the Vortex Air earphones, but both headphones are great examples of high-quality wireless earbuds. The Moshi Bluetooth App really adds to the listening experience with a simple, easy to use interface. The only thing I’d love to see from these two sets of headphones is a carrying case so that when you transport them you don’t have to worry about losing the magnetic clip or the cable getting tangled. I’m looking forward to seeing what Moshi comes up with next.