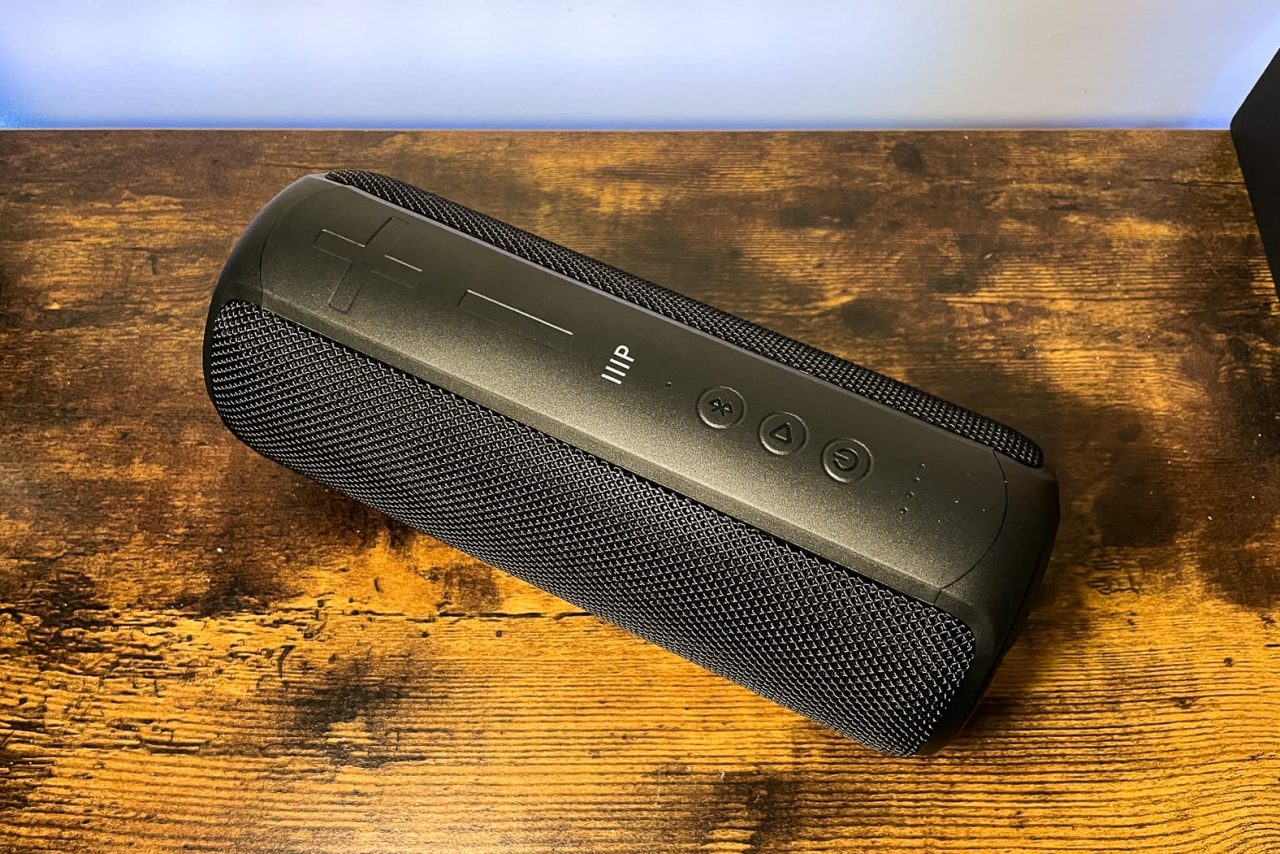 The Harmony Capsule 200 Portable Bluetooth Speaker is a powerful speaker that produces hig quality sound output for its connected devices. It has a lot of modern features, but is lacking in battery life (only 10 hours). The design is similar to other can-shaped Bluetooth speakers, but the charging port is situated on the rear side of the unit, which makes it difficult to use in one of its listening positions when it’s charging. While the sound quality is very good the volume control seems to be unequal when switching between audio sources on a single device. Overall, this speaker provides a good value for its price.

Bluetooth Speaker from Monoprice provides a good value with some room for improvements.

Though once considered a luxury, Bluetooth speakers have become increasingly popular in recent years, thanks to a combination of declining prices and improved functionality. Whether you’re looking for a speaker to take to the beach or one to use in your home office, there are now many different models available to choose from. Harmony Capsule 200 Portable Bluetooth Speaker from Monoprice is a fantastic budget-friendly option for everyday use.

The Monoprice Harmony Capsule 200 Portable Bluetooth Speaker is designed to be used in all types of circumstances including at home, at the office, or on the go. The speaker features Bluetooth 5.0 technology and high-quality digital amplification with two 52mm and one 66mm speaker driver. The speaker is IPX7 all-weather certified and it can be immersed in up to 3 feet of water. The 2500mAh Lithium-ion battery provides up to 10 hours of playback. The speaker is compatible with digital voice assistants such as Siri and its built-in microphone makes the Harmony a suitable option for hands-free phone calls.

Getting started with the Harmony Bluetooth Speaker was pretty easy. Being that I’ve used many Bluetooth speakers that have similar functions, I glanced at the instructions and started using them. Out of the box, the speaker did have some battery power. There are four white LED indicators for the battery level and only one was lit up. It would have been great to see the LEDs have different colors with battery levels.

I put it on charge for a bit, but by the time I was done testing the speaker (around 90 minutes) I was getting an auditory warning from the speaker that the battery was near 0%. The manual does not indicate exactly what percentage of the battery is left at the point that happens, but I would guess around 10% based on my experience with other Bluetooth speakers.

The speaker showed up as “MP43262” in my iPad’s Bluetooth menu. It connected right away and remained connected until the iPad went to sleep. At that point, the speaker also went into standby mode. I powered the speaker back on and it automatically reconnected to my iPad and audio started streaming through it. I did notice that there is a little bit of a volume lag when the audio output device switches over.

Since the speaker is can shaped, you can stand it up on its end or on its side. I found that the best sound quality came out of the speaker when I laid it on its side. Both the diaphragms are unobstructed that way and nothing sounds muted.

I also found that I enjoyed the speaker the best when it was sitting right in front of me rather than off to the side. This was a little strange when I was watching a video because my iPad sits off to the side of my computer monitor and the speaker was playing the audio in front of me. I never noticed that the audio was out of sync in any way, but it seemed odd that the video was playing on a screen so far away from the audio.

I like that the controls are located on the front of the speaker where they are easily accessible. Even though some of the controls have dual purposes (i.e the volume buttons control both the volume and the advance track controls), the major control functions for media and phone calls are represented. The speaker charges using a USB-C connection and a charging cable (USB-C to USB-A) is included.

The charging port is, however, included in the concealed back panel, which means that you can’t charge and have the speaker on its side at the same time. This is one of the things about the design I would change. The other features included in the back panel are the 3.5mm stereo headphone jack and the Micro SD card reader. In order to switch between listening modes, the user presses the Bluetooth button to change modes.

The other thing I would change about the design would be to make the volume button easier to press. They are flat on the speaker can and even though the large plus and minus signs make it easy to find the areas even when you aren’t looking, I found myself having to press very hard to get my input to register with the speaker.

Overall, I’ve been impressed with the sound quality of the Harmony Capsule speaker. It’s definitely a step up from the built-in speakers of my iPad, but not quite as great of a listening experience as my Audioengine HD4 Shelf Speakers. And honestly, that is where I would expect a Bluetooth speaker of this size and quality to land.

That movie is primarily driven by vocals, there is some music within the context of the movie. I would classify this as a ‘rich’ movie soundtrack, but there is a variety in the sound mix. I didn’t have any problems understanding the characters as they spoke and found the other elements of the movie’s sound mix to be mixed well and not muddied at all.

The next thing I did was switch over to Apple Music and listen to some tracks featured on Apple’s Made for Spatial Audio playlist. This is a specially curated playlist that has very high-quality, remastered tracks included. I played through several tracks including Born This Way by Lady Gaga, Even Flow by Pearl Jam, and Blinding Lights by The Weekend. All of the tracks had a rich, full sound. This speaker doesn’t provide a spatial audio listening experience but the quality was clear, crisp, and full.

I switched over to Disney+ after listening to the tracks in Apple Music and watched a few video clips from movies I knew had heavy soundtracks and audio mixes. My selections included Hamilton (Beginning through “My Shot”), Star Wars: The Phantom Menace (Opening Credits and Duel of the Fates scenes), and The Guardians of the Galaxy: Vol II(Beginning through the Opening Credits).

One thing I noticed immediately was that when I jumped between streaming platforms, the volume level jumped around quite a bit. I’ve never noticed this without the Bluetooth speaker connected — at least not to the extent I did with the Harmony Bluetooth Speaker. The Guardians of the Galaxy: Vol II was the first title I pulled up and I had to turn the volume up to 100% in order for it to be a decent level.

Without changing the volume, I started Star Wars and found that title to be much louder. Now, I know there is a big part of this that has to do with the movies’ mixes and not the streaming platform or the speaker hardware, but I’ve never noticed that large of a volume discrepancy before when I’m just listening through my iPad speakers.

Hamilton was an interesting selection for this test because even though it’s a musical, there is a lot of vocal work involved and I was concerned that it would get lost in the mix. The Harmony speaker played the movie’s audio clearly.

When I first took the speaker out of the box, it reminded me a lot of the Megaboom Bluetooth Speaker from Ultimate Ears. I was provided the opportunity to review that speaker about six years ago. The shape and size were very similar to the Monoprice Harmony Speaker and that’s why I thought of it.

With that in mind, I decided to look at some competitors of the Harmony speaker on Amazon to see how it measured up. I narrowed down the choices to Bluetooth speakers that were a ‘can’ shape and priced between $25-$50. I ended up looking at two speakers — the Ortizan Portable Bluetooth Speaker and the Tribit XSound Go Speaker.

I looked at the following features on all three speakers and indicated the differences between the different devices. Part of the reason I did this was to assess the value of the Harmony speaker weighed against other similar speakers. Even though this chart shows some differences, I feel that the Harmony speaker is a good value. Even though its battery life is nowhere near what many of its competitors provide, it has a stronger amp power and provides multiple options for audio input.

The Harmony Capsule 200 Portable Bluetooth Speaker has a lot going for it. It produces powerful, high-quality sound and connects to devices easily. I wish the battery life was better and colored status LEDs would be appreciated but for the list price of $34.99, users get a lot of value with this speaker.