Tonight I’m reviewing the Kwikset KEVO powered by Unikey. I’ve been a long time Kwikset fan, and have been using a keypad based Kwikset model for many years and have been extremely happy with the convenience that it offers to me and my partner. It allows either of us to access the house without fumbling with keys, and it allows us to share the code to the door to close friends without needing to have keys made. So needless to say, when I got the opportunity to try the KEVO I jumped. Installation Installation was a snap. Since I was using a similar Kwikset device, the bolt was fully compatible, but even if it wasn’t it would have been a simple install. All of the hardware you need for several different door configurations are included generously in the box. The detailed instructions were easy to follow and very helpful stickers were on the hardware itself to remind you of how to do each step and even where to gently tuck wires and cables before mounting to the door. All told, install took me about 15 minutes and went with out a hitch. The door even figures out if the door latch is on the right or left of the door with a simple touch as you insert the battery pack.

Features The KEVO comes with a wireless dongle that resembles a key and can be put right on your keychain and used instead of a smartphone, which was fortunate for me (more on that later). Also, you get a set of 2 standard keys you can also use to open the door in case the battery fails or as a backup. Included in the box as well is Kwikset’s nice “Smart Key” which will let you re-key the lock to use an existing key you already have. The instructions for this were simple and I immediately keyed the lock to be the same as my other locks. The real reason this device exists though is its Bluetooth features that allow you to open your door with your smartphone and to temporarily share access with your friends through the app. Unfortunately only a rather short list of Android devices are supported, but multiple generations of iPhones are fully supported. I was unable to test this feature as my LG G3 is not supported. I even tried to install the apk manually in the hopes that it would work, but I was unable to get it working. Google’s Nexus 6, HTC M9, and Samsung’s Galaxy S5, S6, and Note 4 are the only supported Android devices. While this is not immediately apparent on the box a helpful QR code on the back directs you to a website that will list currently supported devices.

The included wireless dongle worked perfectly though, and just a simple tap gets you in the door in a few seconds. The KEVO gives indication of unlocking by blue lights surrounding the lock, and it also uses these to communicate error conditions to you (battery, stuck bolt, etc). Final Thoughts This is a fantastically constructed and well thought out device. The ease of install, clear instructions, and sturdy design, give me a lot of confidence in it. Lack of wide support for Android devices (which might be the fault of the smartphones themselves) is my only complaint, which for me will have me re-install my keypad Kwikset again.

If you and your family and friends have more Apple or Samsung devices that other Android ones, this could be an excellent and convenient choice. BUY FROM AMAZON For more information, visit kwikset.com/kevo or unikey.com. Find Kwikset on Facebook and Twitter. 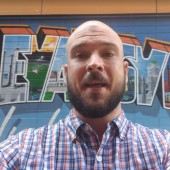