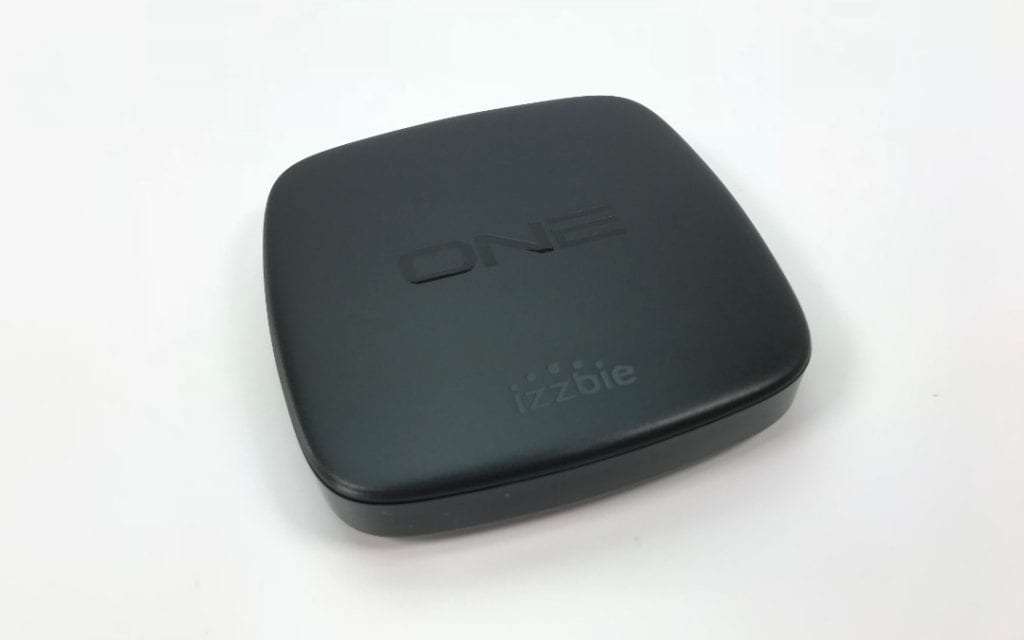 UPDATE: Since publishing this review, I have discovered that the reason that I could not connect to my wireless printer and NAS was due to my personal error. Our home network has a lot of smart devices connected and I used the wrong IP addresses. With so many devices on our network, finding the correct IP address can become a bit complicated.

Not too long ago, I found myself sitting in a crowded coffee shop. This particular place of business offers free WiFi to its customers — a practice that is becoming more common in public areas. I noticed many people near me becoming frustrated because they did not have a solid connection. Part of that reason was that they were online with so many other people. Any of those people sharing that network could have been infiltrating others’ devices and attempting to steal important personal information that was stored on those smartphones and laptops. I, on the other hand, did not have to worry about that because I was using a VPN tunnel — a virtual private network. This type of system creates a secure way for you to use an open, public WiFi network. There are several different companies that provide an easy way to connect to a secure network through a VPN, but they are still susceptible to outside attacks. In truth, there are few networks that are 100% secure. Your home WiFi is the closest thing you will get to one so why not connect to it using VPN technology and the Izzbie device.

Izzbie allows you to safely and securely connect to your home network when you are outside your home. The system consists of the Izzbie device — a small set-top box about the size of an Apple TV and the Izzbie app, which connects you to your account. The device plugs into your router to pull in your network’s signal. You then connect to the device through the app. Izzbie provides end-to-end military-grade encryption to protect your data. It utilizes AES-246 encryption technology and offers complete privacy (no third party VPN proxy servers are used). Using the Izzbie system will allow you to stay connected even while you are traveling. It offers IP Masking and lets you see what you would see on your home network. Since your signal isn’t going through cloud servers, your network speed is enhanced. When you are connected you can access all of your IT resources that are inside your network and your data is always protected. You have the ability to link up multiple networks to form one centralized private network if you wish and you can even share resources with multiple users within your centralized network. Izzbie is compatible with iOS, Android, and Windows operating systems. 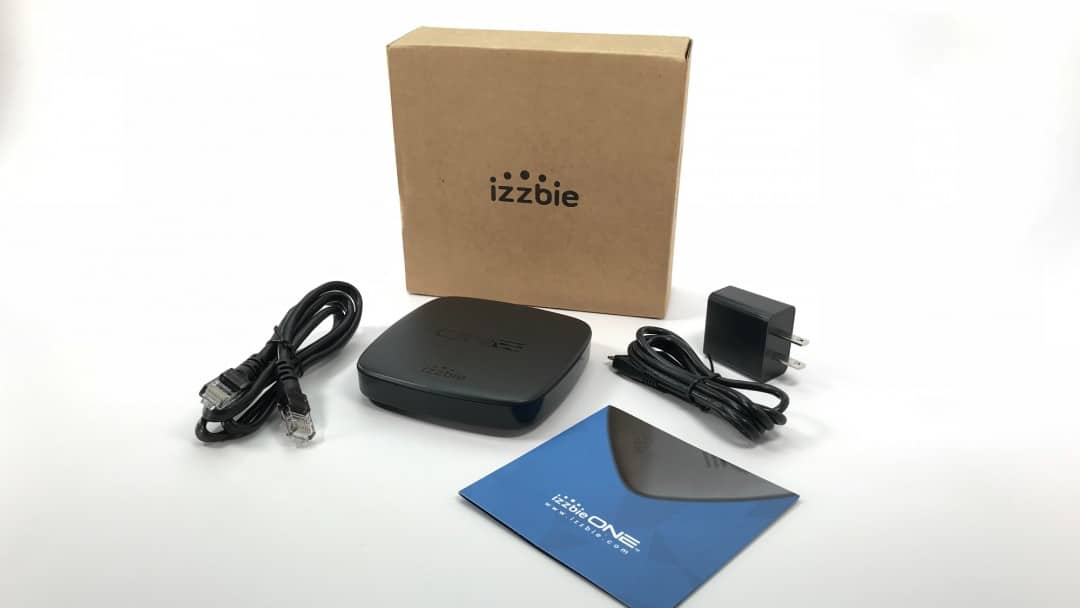 As I mentioned above, I’ve been many public places before and I’ve used more than one type of VPN to keep myself safe. I’ve never been 100% satisfied with them though because I know they can still be attacked. I loved the idea of Izzbie and was very intrigued by the system when I heard about it. The device is currently on Kickstarter with a little less than 2 weeks left on its campaign. To date, they have broken their initial $20,000 goal from 129 backers. So it would seem that dozens of people see the value of this product as I do. Izzbie is on the mission to “eliminate the distances between people and their homes and offices,” and their product does just that.

The Izzbie ONE comes in a fairly bare box with the word “Izzbie” stamped on the front. It’s entirely possible that the packaging will change though given that I received a unit during their Kickstarter phase of funding. The device ships with a quick start guide, power adapter, Micro USB cable, and Ethernet cable. Setting it up is pretty simple. You plug the Izzbie ONE into a power source and then plug it into your wireless router. Every Izzbie ONE comes complete with a one-year membership to the Izzbie system ($8/month after the first year). 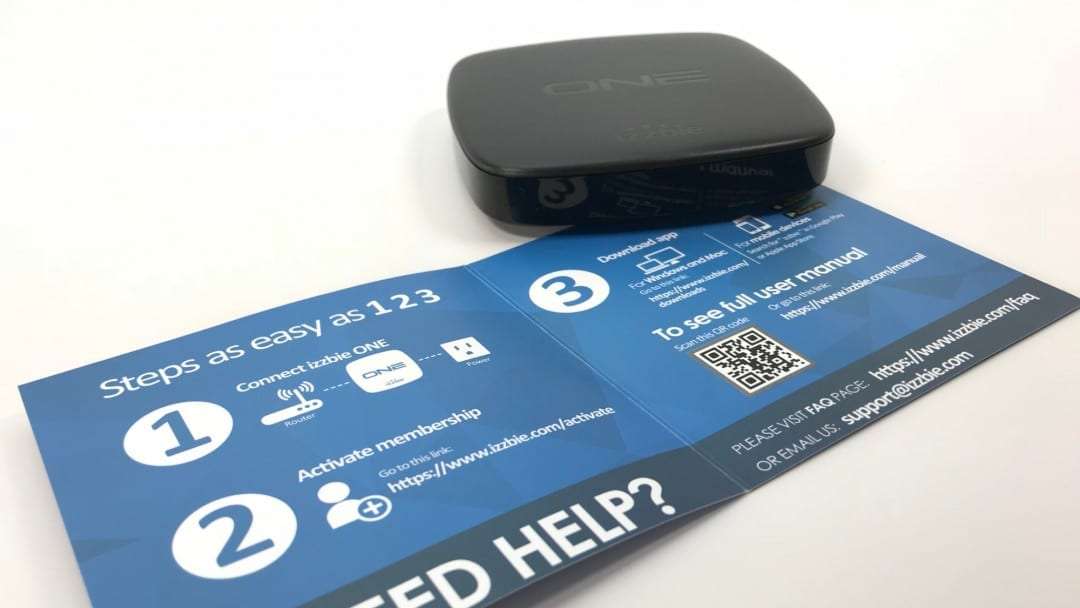 When I was setting up the Izzbie ONE for the first time, I went through several steps for registration (user info, membership level, etc.) and found at the end of the process that it’s rather difficult to finish up using a smartphone due to the screen size. With that in mind, I would recommend registering the product/membership on a standard computer rather than a mobile device. Once you have set-up your account, you then enter your username and password into the app (mobile or desktop) and you’re good to go. 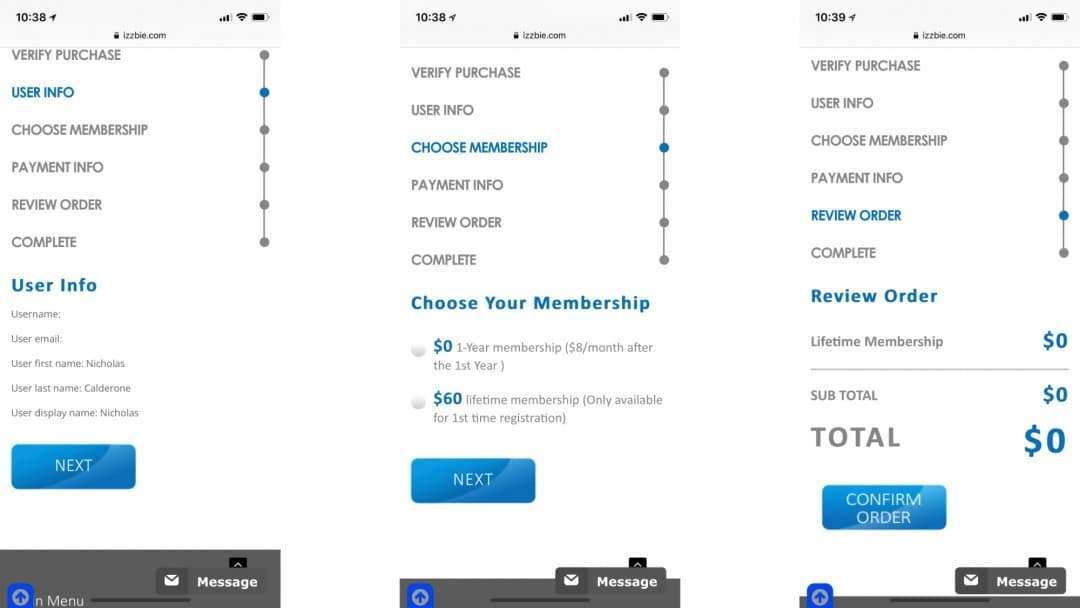 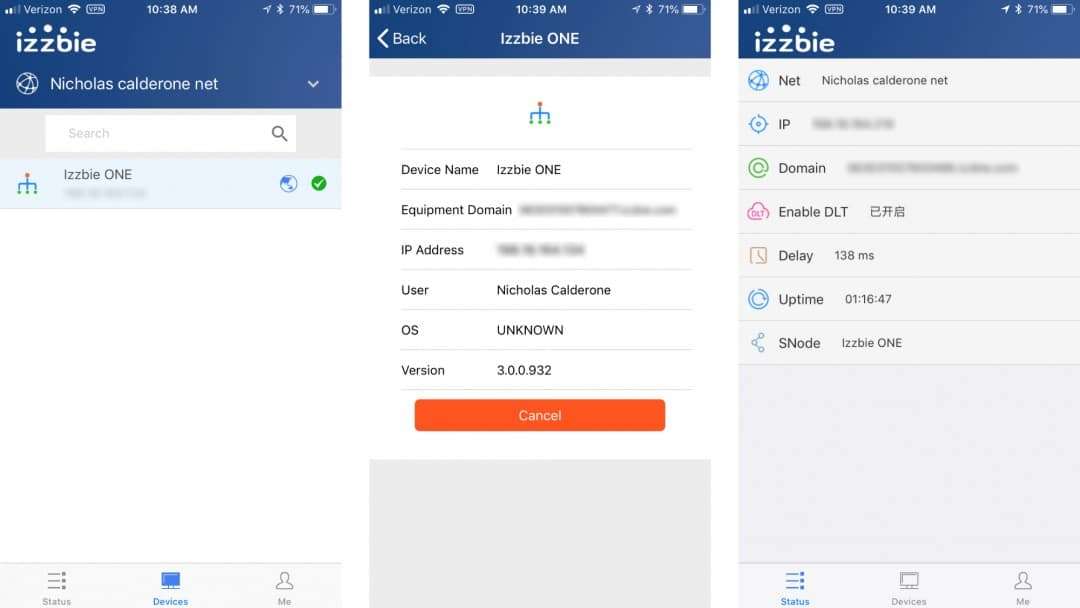 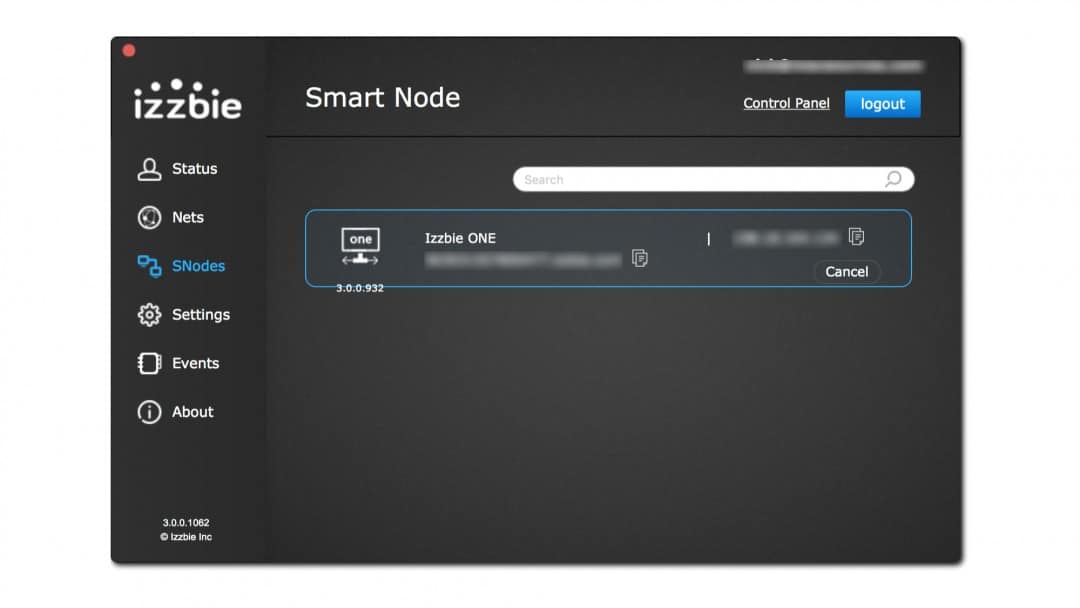 I’ve used my Izzbie ONE VPN connection quite a few times outside our home network and have confirmed that it is actually a secure connection by checking to see if the IP address matches our home network. One thing you are supposed to be able to do though is to connect to devices that are on your home network and even though the connection to the VPN seems to be working fine, I’ve been unable to connect to a network local Drobo or our WiFi printer using the Izzbie connection. I haven’t been able to figure out why that might be happening as they show up when I’m directly connected to my WiFi network. 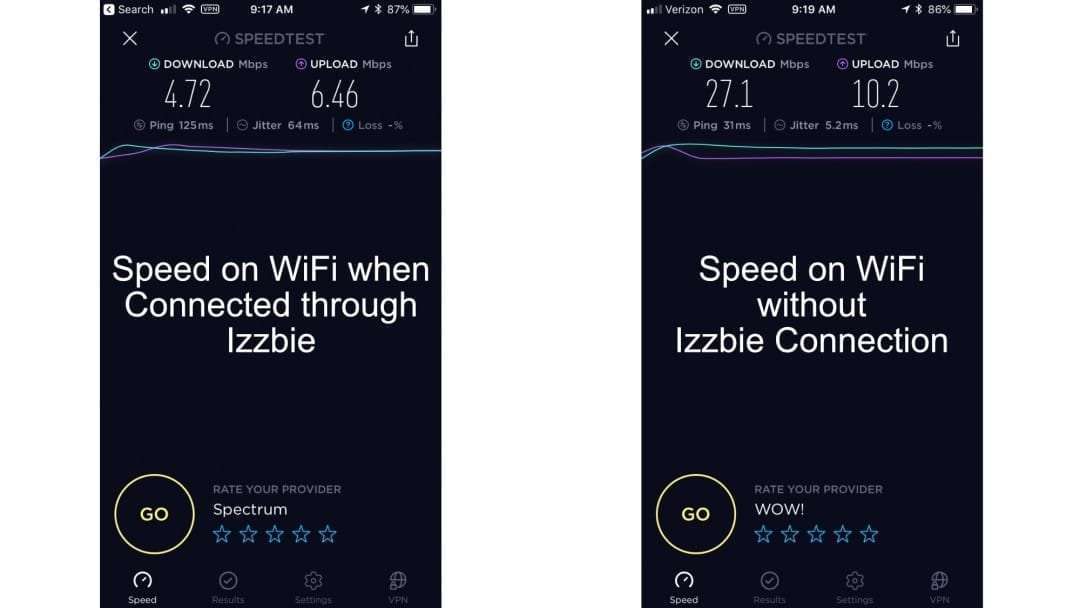 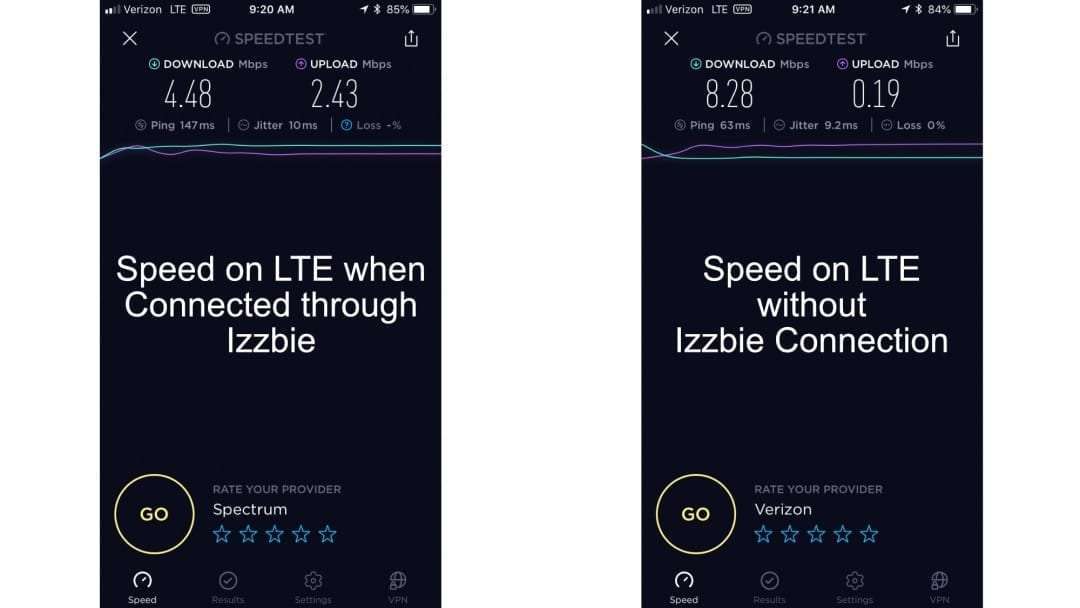 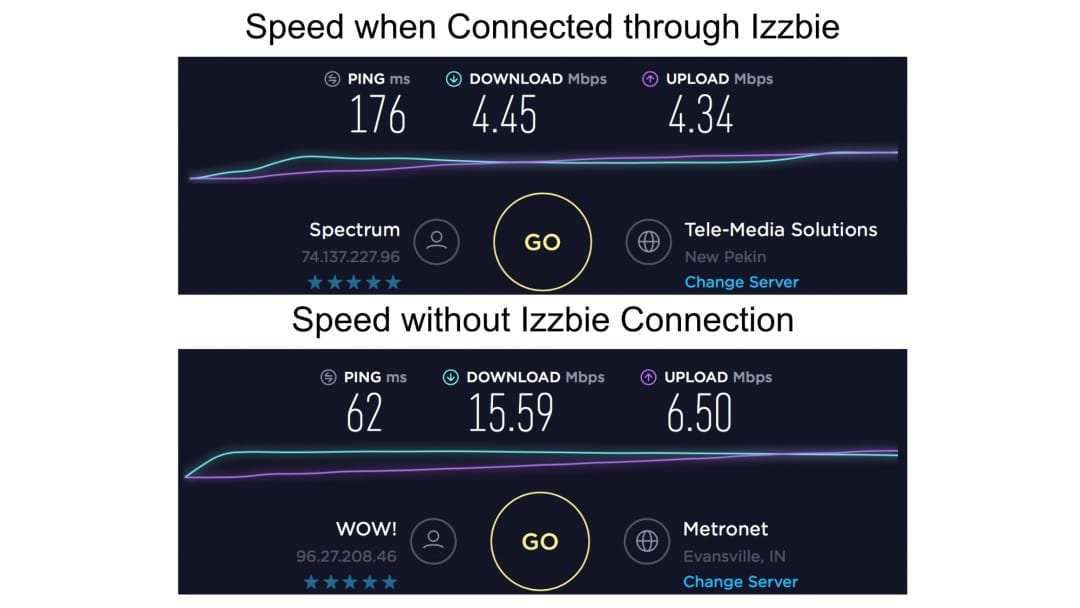 When it comes to a VPN connection, the biggest worry I always have is the security of the system. I had a question of the developers of Izzbie ONE in regards to the how the membership/VPN tunnel worked. I thought that since a membership was required that perhaps my data was passing through their servers. This was the answer I received from Izzbie.

“We use Direct Link Technology that establishes encrypted tunnels between users and the izzbie clients (izzbie ONE device or devices installed with izzbie app). It doesn’t go through our servers and data remain completely private. Whenever a connection is established through the app, it’s a direct link and encrypted. In the case of the router, we use a hole punching technique to establish the tunnel. So there is no need for open incoming ports required on the router by configuration.

That being said, due to the nature of the hole punching technique, there is still an average of 12% of the time that the Direct Link fails to establish. In that case, data would go through our servers as a backup in order to route the traffic through. Data would still be encrypted and no data would be collected in the process (other than the packet sizes). As soon as DLT can be established again, the data would be sent with DLT instead of through the servers.”

The Izzbie system makes it possible to have a secure, trustworthy internet connection no matter where you are in the world. I am a fan of this device, app, and overall system. It works. I think there are a few kinks that need to be worked out, but it’s a really great concept with a successful execution where it counts. Having a secure connection to my home network really relieves a lot of stress for me. I’m glad that Izzbie ONE exists and that the system continues to be developed. 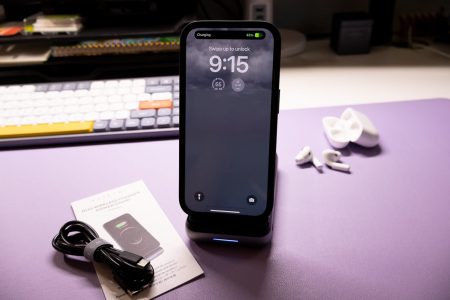