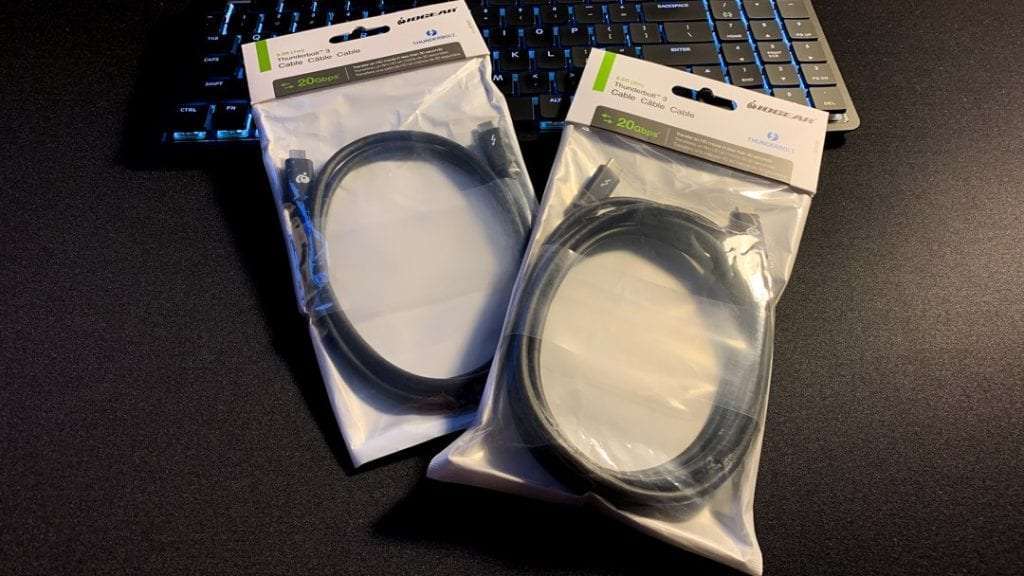 Thunderbolt as a technology standard was first released in 2011 under the name Light Peak. Thunderbolt combines PCI Express and DisplayPort into two serial signals and also provides CD power all in one cable. It’s a powerful  format and one that has gone through several evolutions. The most current version of this technology is Thunderbolt 3. It uses the same connectors as Type-C USB and is regularly found on Apple computers — namely their MacBook Pro series. Thunderbolt 3 is designed for maximum performance and can require a cable to be “active” in order to achieve the highest specs.

Even though the highest specs are found with the shortest versions of the cable (0.5m), the longer cables are sometimes an essential part of a set-up. There are many third party cable manufacturers that are trying to sell and market their cables because they are budget-friendly and I would urge to you only invest in Thunderbolt 3 cables from ‘known’ cable designers. On company I do trust is IOGEAR. They design and manufacture many different Thunderbolt 3 devices including cables and docks and their products have always been reliable to me.

The Thunderbolt 3 cables from IOGEAR are available in three sizes — 0.5m, 1m, and 2m. These specs are for the two longest versions of their cables, which are considered passive and will only transfer data up to 20Gbps instead of the 40Gbps, which is the maximum speed for TB3 cables.

The Thunderbolt 3 20Gbps Cables from IOGEAR are optimized to provide twice the video bandwidth than standard USB, power delivery, and four times the data transfer than standard USB. The TB3 cable is backwards compatible with USB 3.1 Gen 1 and 2 devices. When connected to USB-C devices, the TB3 cables can only transfer up to 10Gbps. The cable has the power to transmit audio, video, data, and power through a single cable. Users can also daisy chain up to 6 devices using one single Thunderbolt 3 port on your computer.

The IOGEAR Thunderbolt 3 20Gbps Cables come wrapped modestly in a plastic bag. It reminds me a lot of what you would see in computer stores. They are the kind of bags that different adapters would be stored in. They are simple, but clearly marked. The cables are identical aside from their length. The cable ends have the IOGEAR logo on one side and a lightning bolt (the symbol for Thunderbolt) on the other. The cables are thick and very sturdy. While the cable casing seems to be more firm than other TB3 cables I’ve used, they are still very flexible.

When it came to testing these lovely cables, I thought I would do it two ways. First, I would see if they would work to connect my laptop to a USB-C dock and second, I would connect them to a Thunderbolt 3 external hard drive to see how fast data would transfer. The dock I opted to use is the Kensington SD2000P Nano Dock. The dock is said to be cross-platform compatible and will work with any laptop equipped with USB-C or Thunderbolt 3. So, I unplugged the USB-C cable that comes with the dock and replaced it with the IOGEAR Thunderbolt 3 20Gbps Cable (1m). This test seemed to work very well. The cable was able to make a solid connection between the dock and the computer. The external monitor and keyboard I had connected through the dock worked without any issues and the laptop was receiving a charge from the PD function of the cable, too.

Next, I pulled out the G-Drive Mobile Pro SSD Portable Hard Drive. This is a special external hard drive because it is designed to work with Thunderbolt 3 as its main means of connectivity. It came with an active TB3 cable and had an impressive read/write speed of 2324/1102 Mbps. I decided to run the same speed test using Blackmagic Disk Speed Test with the passive cables. Prior to testing the cables with this drive, I would expect to get around half of the read/write speed that I got with the active TB3 cable given that it provides the maximum data speed at 40Gbps. I was surprised to find that these were the results.

While the cost of the IOGEAR cables is a little higher than some other third-party cables, I believe it’s worth it to the consumer to have a reliable cable that you know won’t damage your equipment or wear out unexpectedly. The IOGEAR Thunderbolt 3 20Gbps Cables are a good investment if you are looking to add Thunderbolt 3 cables to your repertoire.