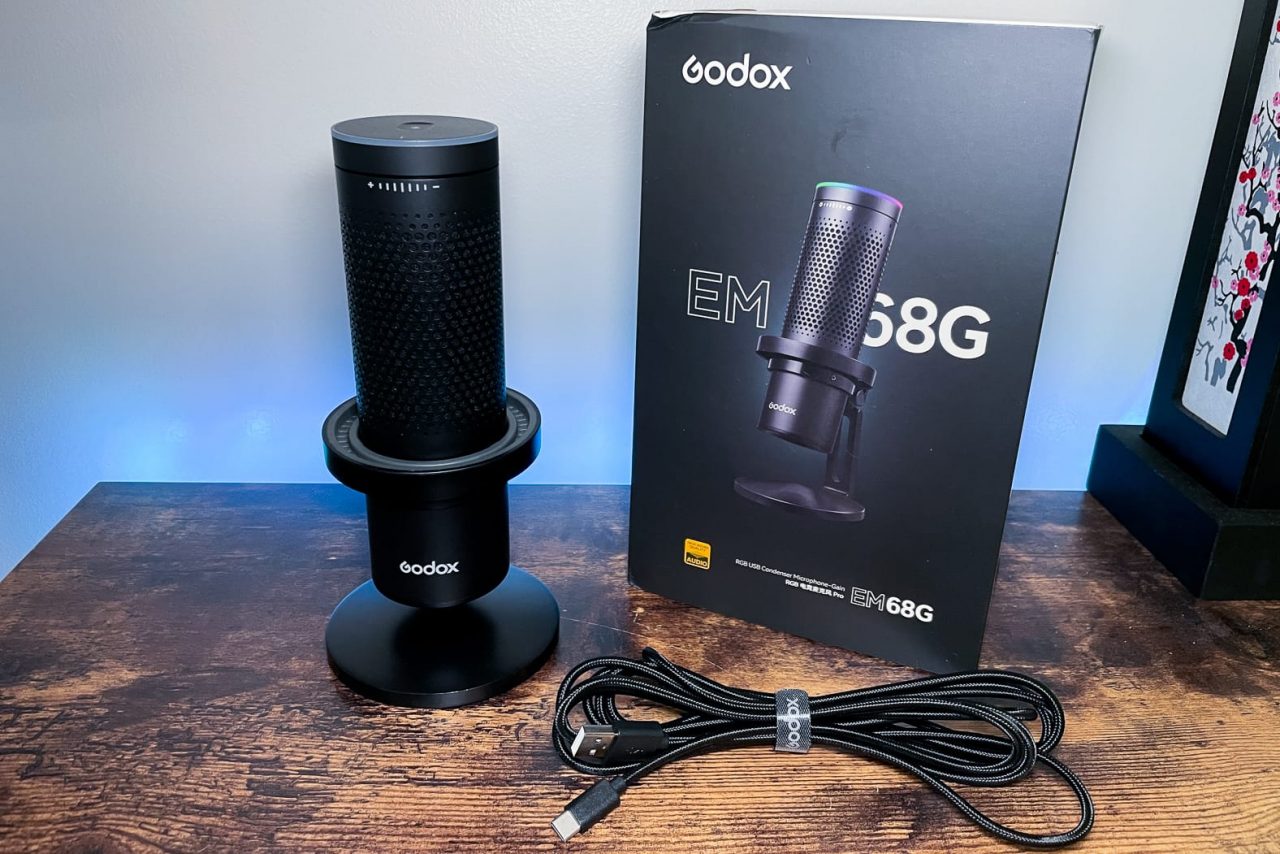 The Godox EM68G RGB USB Condenser Microphone is a great add-on to any content creator's setup. It's easy to use and has a great look to it. The customizable RGB effects are a nice added feature and the price is comparable to similar microphones.

The EM68G microphone is a great addition to any content creator’s setup.

Over the past couple of months, I’ve been thinking heavily about starting a podcast. I love performing, but I have horrible stage fright. So, being in front of a camera just doesn’t suit me well. I have found, however, that being behind a microphone is comfortable for me. In the process of planning for this podcast, I have taken stock of the equipment available to me and was looking at options for microphones.

When you are trying to select the best microphone for your recording purposes, there are a couple of different factors to consider. First, you want to determine the ‘type’ you want. There are three main types that are used for modern content creation — dynamic, condenser, and ribbon.

Even more important than the type of microphone you choose, is the polar pattern — or the direction — from which the microphone records sound. There are three common polar patterns:

The EM68G RGB USB Condenser Microphone from Godox features a cardioid polar pattern so, it couldn’t have come at a better time for me to test it out.

The EM68G is designed to be a streaming companion for content creators. With its cardioid recording pickup mode, it puts the user at the center of the channel and reduces ambient noise. It has a built-in high-density sponge to diminish pops.

The EM68G comes in a simple box with a black cardboard wrap around it. The microphone is pre-attached to its stand. The mount for the mic is flexible and sort of a shock mount and it’s secured into the mount using small screws. The microphone could be removed from its table stand mount and placed into a boom arm with a shock mount that is adjustable.

The stand itself is weighted nicely and it can counterbalance the microphone even if it’s tilted at its most extreme angle — approximately 45º. The back of the stand has a long cutout for cable management. The microphone is powered directly through the USB-C cable that connects to the computer. There is also a headphone port on the back of the microphone so that you can monitor your voice while you record.

The microphone has three unique features built into it — the mute button, the gain level control, and the RGB light. The mute button is touch-sensitive and it’s either on or off. The RGB light ring is only included to indicate when the mute function is enabled or disabled. When the light is off the mute function is on; when the light is on, the microphone is active.

The default color for the RGB ring is red, but users can adjust the light effect by using the companion app (Godox Mic). The lighting effects are the only feature controlled within the app. it’s free to download and very easy to use. Once you have it downloaded, you set up a user account/password and then connect to the microphone via Bluetooth. There is no option on the microphone for turning Bluetooth on or off. You can switch between monochrome on, monochrome breathing, gradient, RGB loop, and sound effects mode.

The Godox EM68G RGB Cardioid Condenser USB Microphone has a list price of $129 and it’s available through B&H Photo and Adorama. The mic can also be purchased on Amazon, but it’s provided through a third-party seller and the pricing isn’t aligned with the other online sources.

I have really enjoyed using the EM68G microphone. Because it uses plug-n-play technology, it’s super easy to get started with. I also like that it doesn’t come with a lot of unnecessary accessories. The only things in the box with the microphone is a USB-C to USB-A cable and its manual. The built quality of the microphone and its stand are very professional.

I have used several different USB mics and think this is one of the best as far as design goes. I love that the stand is already assembled and the mic is connected because it adds to the quick and easy nature of this device’s setup.

I found the recording quality to be quite amazing. I recorded some test tracks for the podcast I thought up and was highly impressed with the sound quality. My voice came through very clearly and there was a lot of dynamic range in the sounds that were captured. I was recording in my office, which is just a spare bedroom in our house.

The floor is carpeted and the walls are not completely bare but the room is far from soundproof. That said, there really wasn’t a lot of ambient noise captured. My fiancé was playing a video game with some friends online while I was recording and the mic did not register any noise he was causing. The EM68G does a great job of isolating the subject that is recording from the surrounding noises.

The gain control on the microphone is a great touch. It’s easy to use and because of where the dial is included, the user can easily adjust it while recording if necessary.

One thing that I would like to see improved is the sensitivity of the mute button. I had some trouble getting the surface to capture my touch when I was trying to enable and disable the mute function. It’s possible that this was user error in where I was placing my finger, but it would be nice if there was a way to adjust the sensitivity of this button.

I also feel that there is room for improvement with the companion app. It serves its purpose just fine and works as it is designed to, but it seems strange to me to have an app for a microphone that only controls the lighting effects. Perhaps more features can be added in the future.

The EM68G microphone is a great option for content creators. Its ease of use, recording quality and added features really make this a worthwhile investment. The price is more than fair and it really looks great when it’s in use.