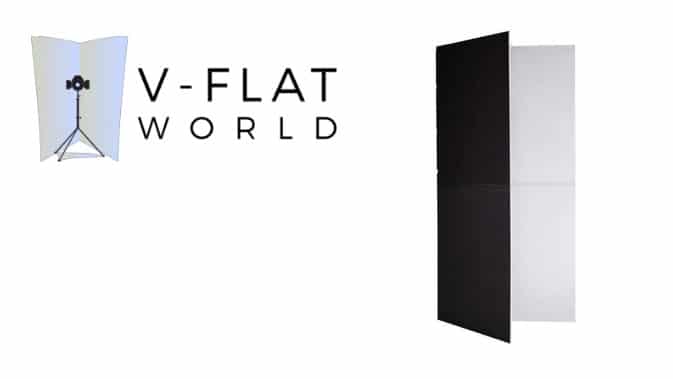 When you need a portable, lightweight background.

When I was 8 years old, my dad started a video production business from the basement of our house. Over the years, I was fortunate to experience what it was really like to operate behind the scenes of a film set. Even though most of our productions were commercial in size, the process was still the same and in many cases so were the props needed to make a shot work. One of the most versatile items we had access to were flats (a.k.a – studio flats). These set pieces were constructed using a wooden frame and drywall.  They are almost a full wall except that flats don’t have insulation built into them.

Flats are supposed to give the illusion of walls or buildings in a background and have been used in stage theatre productions for a very long time. In recent years, as vloggers have become more and more popular, V-Flats have also increased in popularity. V-Flats, as the name suggests, are made up of two flats hinged together so that they form a “V”. V-Flats serve the same purpose as classic studio flats do, but they are traditionally made using large pieces of foamcore rather than plywood, drywall, and lumber. V-Flats are lightweight and can be stored easily. They can also be used to bounce light or block light depending on if you have black or white foamcore.

Now that I’ve given you a brief history of V-Flats as a product, let me tell you about our experience with the V-Flats from V-Flat World.

V-Flat World is exactly what it sounds like — a company that makes V-Flats. You have the option of purchasing a single V-Flat or a package that has two V-Flats in it. Their V-Flats measure 40” x 80” x 1/2” (each board) and its folded size is 40” x 40” x 2”. One side is white while the other size is black. Even though they are made with foamcore, the flats weigh around 7 pounds. They are pretty easy to transport because they fold up. The foamcore boards are held together with what appears to be strips of gaffer tape. There are a few small strips of Velcro that hold the two side of the V-Flat together when it’s standing upright.

The V-Flats arrived in a plain cardboard box. When we took them out, we found that unfolding the flat and reassembling it into the freestanding V-Flats required the instructions but was easy to do. Once we had them sitting upright, we took some photos using them as a backdrop and also used them as bounce cards for our lights. There were efficient and once they were set up, they were very useful.

When I was working as a member of a studio crew for my dad and had to move the constructed set pieces from place to place, it was a huge job. In that respect, these V-Flats are a dream to work with. When they are fully extended, they are just under 7 feet tall, which is shorter than some standard V-Flats, but still tall enough to be unwieldy. We found when we set them up that unless you secure them in just the right way, the board will detach and collapse. Herein lies the biggest problem with V-Flats constructed from foam board — they are fragile. In the process of setting them up we did bump them into each other and ended up with a few dents in the foam. On top of that, the edges were already starting to look worn after one use. One thing you can do to help combat that is to wrap the edges with gaffer tape. It will prolong the use of the V-Flats, but won’t keep them from looking used if they aren’t properly stored and carefully used on production.

Another issue I had with the V-Flats was that the Velcro showed up on the black side. You can see from the included image that when used as a side panel it isn’t an issue, but if you planned on using the flat as a background, you would definitely see the white Velcro pop off the surface of the black board.

One big detail I want to point out is the price of the V-Flats. If you purchase one Foldable V-Flat from V-Flat World, you will spend $195.99. If you’ve ever attempted making your own DIY foldable flats, you will know that what you are paying for here is convenience. You can make the exact same style flat with materials from art supply stores or the Internet. And, you can probably make it for cheaper then you will spend with V-Flat World. But, you will need to weigh the cost of purchasing the pre-made flats over the time and effort (and hassle) it will take to make your own DIY flats.

Even though I’ve been a bit critical of these flats, I do believe they are worth the investment as long as they are used properly. I personally wouldn’t want to take the time to construct foldable V-Flats and they are made pretty well. I do hope that V-Flat World improves on the current design, but feel that they are providing a good service for photographers and videographers by offering pre-fabricated foldable V-flats.