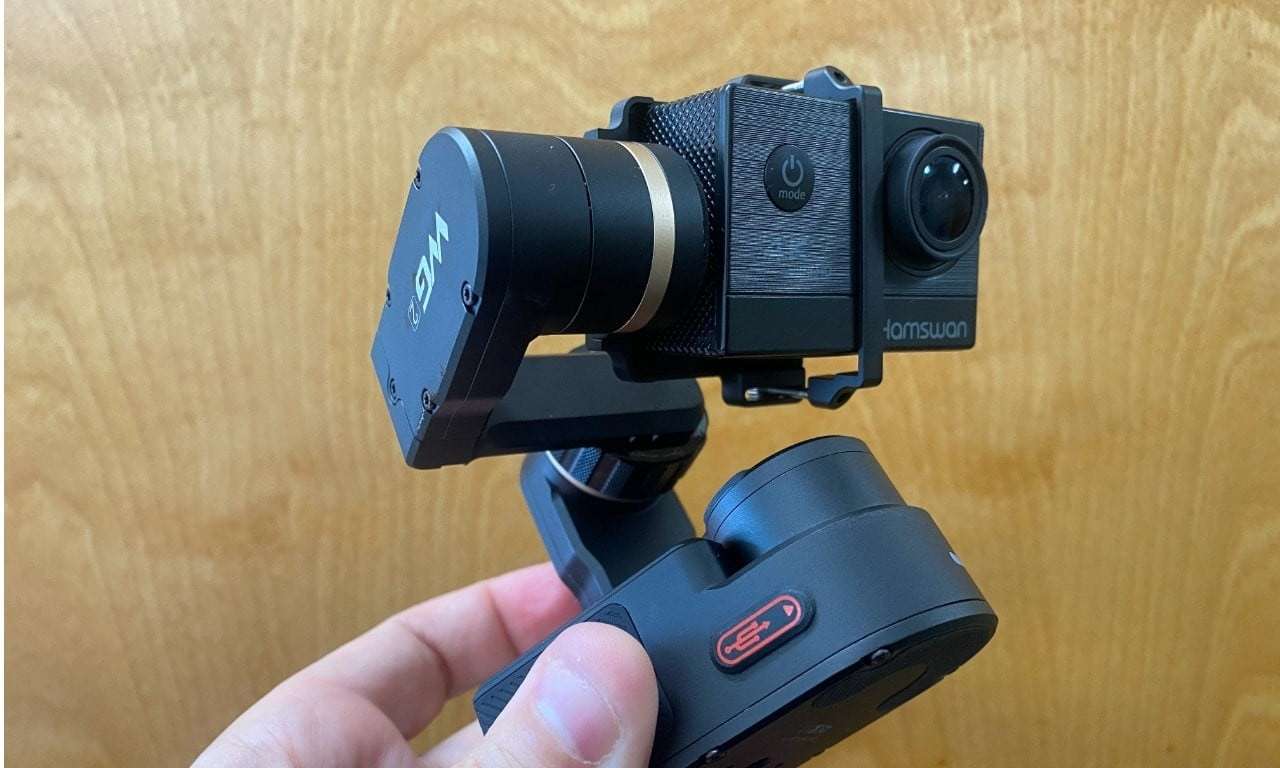 “Hey Dad, watch this!” Except for “Hold my beer,” has there been another phrase that captures the “uh oh” feeling? As my boys have grown older, they have become markedly more adventurous.  No longer interested in simply riding a bicycle, skateboard, or their rollerblades, they wanted action, excitement, and learning tricks.  More than that, they wanted to record themselves doing activities to consider posting to the internet or to show their friends.  My wife and I decided to purchase an action camera for them but refused to buy the big-box, name-brand, trendy device.  Instead, we opted for a cheaper camera, one that came with numerous attachments for both land and aquatic endeavors.  With mounting brackets and helmet attachment points, they were able to take their activities to the next level.  When I heard about the FEIYUTECH gimbal, I thought that this would further add to their fun.

The FEIYUTECH FY Wearable Gimbal arrived in a 7 7/8 inches long by 5 7/16 inches wide by 2 7/8 inches wide retail box.  Despite the attractive blue rectangle along the top left of the box, containing the FY FEIYUTECH name, and the verbiage WG Wearable Gimbal along the bottom left, the main focus of the cover was the large image of the device.  Measuring 3 7/8 inches wide by 3 3/4 inches tall, the image of the black/gold gimbal appeared to be submerged under water and appeared to be surrounded by air bubbles.  The front panel displayed the FEIYUYTECH name in black-font, while the top panel displayed the WG Wearable Gimbal logo.  The back panel provided six icons (Parkour, Run, Drift, Mountain Bike, Rock-Climbing, Cross Country), four QR code’s linking to their website, Facebook, Twitter, and YouTube sites, and the company address, website address, telephone, and Made In China.  Along the bottom right of the rear face, in small font, you will find “*Camera not included,” I removed the outer slip cover and evaluated the inner white box.  The cover displayed the Feiytech name in grey-font, while the front, top and right side panels were left unadorned.  The left side panel had a QR Code and SKU sticker with the company name, WG logo, Bluetooth Icon and several product manufacturing labels. Lastly, the back panel contained the same product name, address information,and product labels as previously mentioned.  Classy, pristine, and clearly marketed, the packaging proved to be rather pleasing.

I lifted the top of the box and found a Feiytech envelope atop a black neoprene bag (6 7/8 inches wide by 4 5/8 inches tall by 2 1/2 inches thick).  I opened the envelope and found a FEIYUTECH Warranty Card and a 24-page bilingual instruction manual. The cover of the manual provided very useful information about the gimbal.  For the first time, I found out that the device was compatible with GoPro HERO5, GoPro Hero4/Session and Cameras with similar dimensions.  I opened the instruction manual and found instructions for use in rainy, boating, and swimming activities less than 5 meters under water.  Before using this device under the water, ensure the usb plug has been covered first and then allow it to dry before charging.  The instruction manual did a great job detailing the installation, power on/off, product overview, App download (iOS/Android) and connection, mode/function, autorotation mode, manual lock, firmware upgrade, Gimbal initialization, and parameters using a mixture of ink-outlines and descriptive verbiage. To start, remove the included fixed block, install the camera on the retainer late and lock the camera down with the retainer bar and screws.  To power on the device, press and hold the function button until the light turns green. You can hold the camera in vertical, forward , or inverted mode with the camera toward the right or left.

Excitedly, I turned to page 11 and reviewed the parameters: Tilting angle 360 degrees, rolling angle 70 degrees, panning angle 360 degrees, tilting increments minimum 1.5degree/second, maximum 150 degrees/second, panning increments 1.5deg/sec to 270deg/sec, base weight 265g, and battery time 2.5 hours.  The device measures 102.5mm tall from the base to the top of the gimbal, 89.33 mm long, and 40mm wide at the base and approximately 78mm wide at the gimbal. To test the device, I removed the 13.36-ounce device/carry bag from the black foam padding.  The gimbal carry bag had an 11 inches long zipper with a metallic loop at the end. The main panel of the carry case had an attractive white FY FEIYUTECH logo upon the black neoprene base.  I unzipped the bag, removed the 9.7-ounce gimbal, the individually wrapped universal screw 2 prong adapter, the square camera bracket with screws, and the 20 1/8 inches long USB-A to USB0-micro cable.  Returning to the instruction manual, I compared the gimbal to the pictures.  The base of the of the gimbal had a 1/4 inch screw hole on the front and the bottom of the device. I removed the white block, removed the retainer block and installed my sons Hamswan 4K ultra HD camera.  At first, I was concerned that the camera would not work with this setup, but I could not have been more wrong.  With installation complete, I plugged the USB-micro cable into the gimbal and waited for the device to charge.

While charging the 1500mAh battery (2hours), I scanned the QR code on page 5 with my iPhone 11 Pro Max and downloaded the FEIYU On App. With the App, you can control the gimbal and the various modes: 1. Panning Mode: Tilting/Rolling are fixed and the camera moves according to hand movements. 2. Lock Mode: Fixed orientation of the camera.  3. Panning and Tilting Mode: Rolling direction is fixed and camera lens moves with hand movement of the user.  4. Reset: Reset the Tilting axis to initial orientation.  To access these modes, you can press the button on the side of the gimbal.  A single press will alternate between panning mode/lock mode.  A double tap will activate the panning and tilting mode.  A triple tap will activate 180 degree rotational mode.  A quadruple tap will activate the autorotation mode. A quintuple tap will cause the gimbal to initialize.  You can press another time to awaken the gimbal and then triple tap to initialize.  If you forget which mode you are in, you can look to the indicator status light for additional information: A blue light flashing once=panning mode.  A blue light flashing twice=panning and tilting mode.  A solid blue light=lock mode/initializing.  A flashing blue light=initialization failure/malfunction.  A red light flashing three times=low battery.  A flashing red light=turning off.  While in the autorotation mode (4 clicks), manually set the camera/gimbal into the initial position (pan/tilt), press the button, then turn it to the end position and press the button again to lock in the final position.

The camera paired wonderfully with the gimbal and the functions were easy to navigate. I downloaded the 4.1* App and tapped the “Regist and login” button on the main panel. The App gave me a warning that I needed to enter a valid email address.  Interestingly, the area to enter the email was not readily apparent.  I tapped “I understand,” and then entered my email address into the region above the button.  The App asked me to allow Bluetooth access and then took me to the main panel. If you tap the “Find Again” option along the bottom of the App, the App will pair with the gimbal. Once paired, you will have a large circular thumbstick, which will control the robotic arm. Watching the gimbal migrate with the App control, I was reminded of the robot Johnny Five from the movie Short Circuit. Pair the gimbal with action camera accessories and enjoy a more stabilized image. When done, hold the power button until the light flashes red and the gimbal powers off. Remove the camera, reinstall the white block and then place the device back into the bag for later.

Summary:
My favorite part about the FEIYUTECH gimbal was that it was designed to work with a variety of cameras beyond GoPro.  Do not misunderstand my statement, however, as I have nothing but respect for the GoPro company and devices.  However, many cannot afford the luxury of the top-end device.  Instead, we may have to settle for lesser-known companies, like the Hamswan camera that my son uses.  Out of the box, the gimbal was ready to go.  Simply charge the device for a few hours, slide your camera into the brace, download the App, and then use the appropriate connector for your desired activity. The App was easy to find, easy to use, and paired quickly with the gimbal. If you are interested in adding a gimbal to your action camera, check out the WG2 device from Feiyutech. 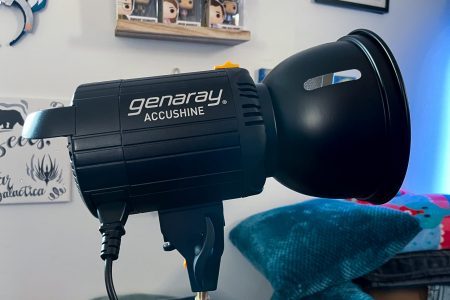 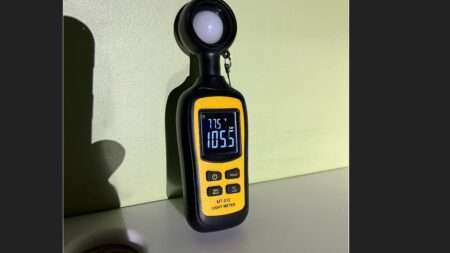 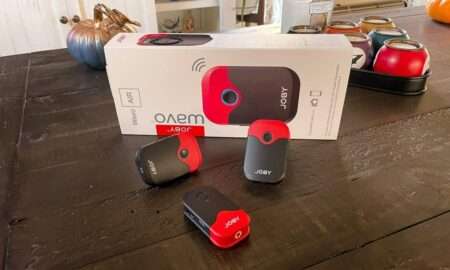