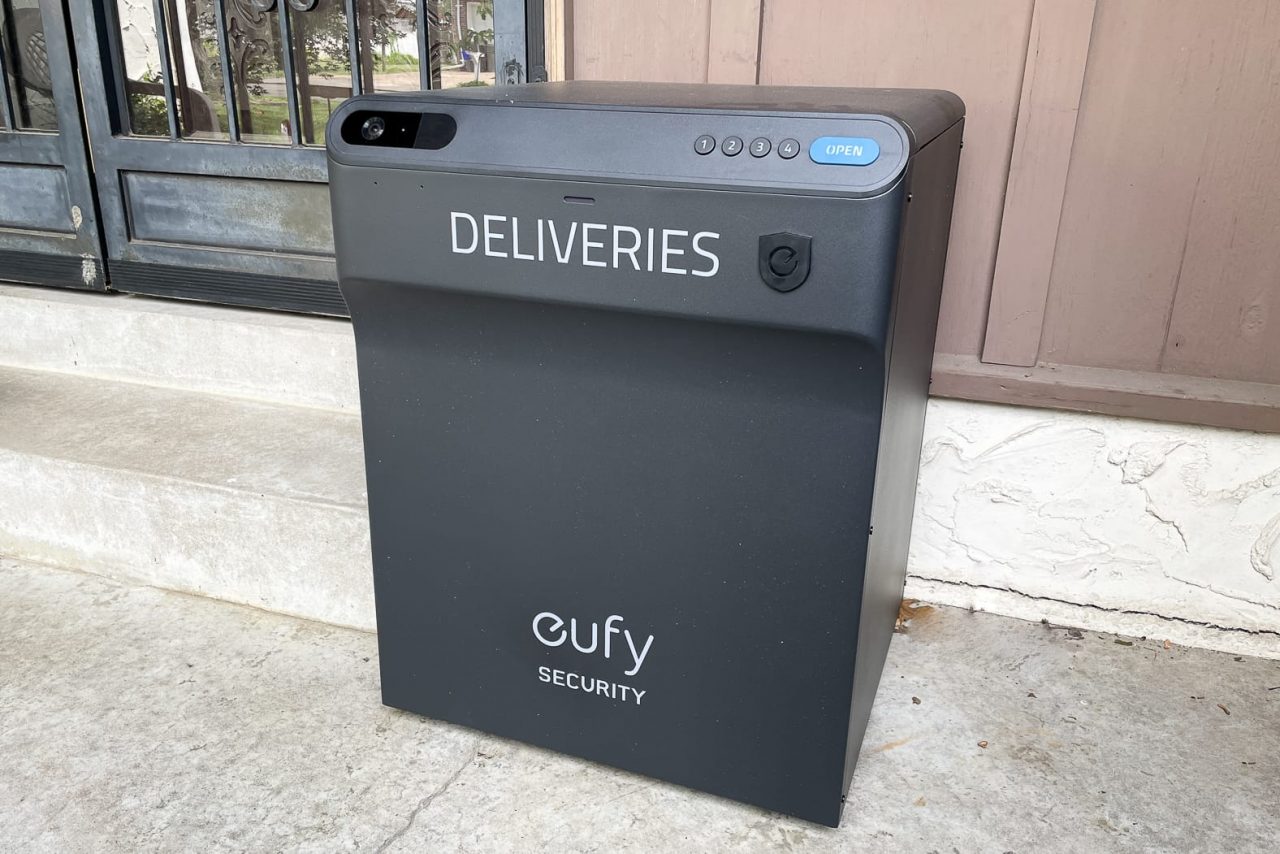 This amazing security product provides a safe haven for packages. It can be opened via connected app, key, keypad code, or smart assistant. It's large enough for most packages and is rated IP65 (weatherproof). While assembly is required, it is an easy product to put together and get installed.

Eufy SmartDrop is a great investment in your home security and protects you from porch pirates.

With an estimated $4.9 trillion US dollars spent worldwide on e-commerce in 2021, it’s no wonder that thieves have taken to stalking porches rather than cars in parking lots. In fact, 43% of Americans report falling victim to porch pirates. So, what can consumers do to protect themselves from this type of theft? One potential solution is to add a secured location for package drop-off to your home or business.

When you search on Amazon for ‘locked delivery box,’ there are a number of options that come up. But, we discovered earlier this year, that not all package boxes are created equal. Some of them are downright awful. One that easily stands above the rest is the Eufy SmartDrop – Smart Delivery Box.

The Eufy SmartDrop was originally released in July 2021 after a successful Kickstarter that launched in August 2020. It is essentially an extra large safety deposit box that can be used for delivery drivers to leave packages in when the user isn’t at home. SmartDrop measures 30 x 14.4 x 12.6 inches and is 68 liters in volume.

The box has a built-in HD camera and 2-way audio that can act as a smart doorbell of sorts. With it, delivery drivers can alert users that they have a package to leave. The box can be left unlocked for package deposit (it automatically locks after one has been made).

If the box is locked, a pin code can be set and relayed to delivery drivers via the shipping label or communicating through the SmartDrop’s camera and microphone. The user can unlock the box via pin code, standard mechanical key, mobile app, or smart assistant.

The Eufy SmartDrop is currently being sold for $399.99 through Eufy.com and Amazon.

The Eufy SmartDrop comes in a large shipping box. It weighs approximately 44 pounds and there is assembly required. The assembly process is actually one of the only complaints I have about this awesome product. And, it’s not really a complaint because I honestly don’t see another way for this product to be sent out to consumers. That said, there are six large metal panels and tons of tiny screws to insert into each panel.

The first step in the assembly process is to lay all the parts out to make sure you aren’t missing anything. The assembly hardware includes the aforementioned screws, a charging cable for the battery pack, the battery pack, the gas hinges, keys, and anchoring screws. The anchoring screws are optional. If you have the box placed in a secure enough spot, I don’t feel that they are 100% necessary.

For example, our SmartDrop is placed on our covered front porch directly next to our front door. This location would require a lot of maneuvering on the part of a thief in order to pick up the box in its entirety not to mention the fact that it’s nearly 50 pounds when it is empty. With that in mind, we felt comfortable enough to leave the box unanchored. If you don’t have a secured location or your SmartDrop will be accessible to others, I would recommend anchoring it.

Even though there are lots of little screws to deal with, the box is not hard to put together. Each side slides into each other and then it’s just a matter of tightening screws. The instructions that are provided are very easy to follow and it doesn’t take long to assemble. Again, the step that takes the longest is screwing in all the screws.

Once you have the box assembled, you are ready to insert the battery pack. This might be my favorite feature of the SmartDrop — the rechargeable battery. In our last secure dropbox, we constantly fought changing the AA batteries that were in the lock and the AAA batteries that were in the keypad. Eufy made this very easy and included a hefty battery pack. The specs state it’s a 10,000 mAh battery. Users also have the option of connecting the box to wired power with a power adapter (not included).

We’ve been using the SmartDrop box for just over 30 days and we’ve only had the charge the battery pack once. We receive multiple packages per day and also trigger the camera with motion throughout the day. So, I would say that our battery usage is probably higher than the average consumer.

Given that information, I would think that a typical home user who might receive one package a day or a few packages per week, would likely get an entire month of battery use from a single charge on the battery pack. The only downside I would highlight with the battery pack is that it recharges via Micro USB. I would much rather see this be USB-C.

Connecting the box to the app and WiFi was a complete breeze. When we set it up we did it just a few feet from our wireless router, but the location where it lives is only about 20 feet away from it. We have not had any connection problems with it. The camera records as it should and we have been able to open it remotely with very little lag between the app and the device. It’s been a delight to work with and has not caused any stress because it just works.

We receive packages of all sizes and there have only been a handful of packages that would not fit in the box due to their size. Our delivery drivers have not had any issues accessing the box using the Open button. We hung a sign on our door with instructions and after a month, most of them caught on easily enough. There were a few at first that didn’t get it right away and we’ve had several comments that it’s a really cool option for package storage. They’ve been very impressed and I actually had one driver ask me where they could get one.

Because of its size, the SmartDrop has definitely been a conversation piece. I loved to see that the camera was built it. We happen to have a smart doorbell attached to the side of our house directly above the SmartDrop. So, we have the sensitivity on the SmartDrop’s camera turned down. That said, it does seem to be a little less responsive than I would expect.

Our doorbell picks up the tiniest of movements and announces that “you are being recorded” multiple times before the SmartDrop provides directions on how to use the Open button. This hasn’t been a big hurdle for us though since the majority of our delivery drivers ‘get it’ right away or follow the instructions we provided. It also helps that the Open button is a different color.

While our SmartDrop is located in a somewhat enclosed area, I do have a great case study for how well it holds up against the weather. About two and half weeks after we installed the box, we had a really severe thunderstorm move through our area. The meteorologists refer to it as a ‘straight-lined wind event’ but if you didn’t know any better, you would think a tornado had blown through the area.

Our neighbor’s fence was knocked down, we had branches and limbs down all over our yard and debris littered our entire porch area. The SmartDrop was unfazed. The wind was so strong that it moved our pergola that resides on our back patio about 12 inches, but the SmartDrop didn’t move one inch. It was steady and strong and the inside remained dry and untouched. We had blowing rain and hail that day and the SmartDrop kept working.

I don’t like to play favorites, but the Eufy SmartDrop definitely stands out against its competitors. It is probably in my top five favorite gadgets I’ve ever had the pleasure of testing. The app connectivity works as it should and it’s a sturdy product that provides us with a safe, secure location for our packages to be delivered. If you are looking for an option like this, I would not hesitate to invest in this as a solution. The SmartDrop is a remarkable piece of technology and it solves a problem that many people have.