Duet Display is an extra monitor for your Mac.

Have you ever been working on a project and needed more screen space or wanted additional windows viewable while working in full screen mode? I have and thanks to some great minds at duetdisplay.com, I can now use my iPad as a second Mac screen.

Duet Display is an iOS app that turns iOS devices into a  second display using your lightning or 30-pin cable. It was developed by a group of Ex-Apple engineers with one purpose in mind – harmony. “Duet is not about multiple displays, but about iOS and OS X hardware and software working in harmony together.” The engineers behind Duet Display felt that as people bought new mobile devices, that this app would help users meld their devices together instead of having to continually replace them.

Before Duet Display, I had used my Apple TV as a second screen by using AirPlay mirroring and although it worked, it was not a great experience. It was jittery and would lose connection frequently. As a result, I would only use it when I absolutely needed to. Duet Display gives you a great lag-free experience that I find so nice, I’ve been using it almost daily and I’m trying to find more ways to use it. For example, I started using it to hold my tool pallets for Photoshop and moved my iMessage and Twitter client to the iPad screen so that I have more real estate available on my MacBook Pro. Plus, with no lag, you can increase your productivity up to 48%.

With Duet Display I’ve been able to simply plug in my iPad and start using the app with no hassle. After you connect your iOS device with your Mac via a lightning or 30-pin cable. You do have to download Duet Display for iOS and Mac (free). Once you start up the apps, your set-up is done and you are free to start using your iOS device as a second screen.

Duet is compatible with Macs running 10.9 and later, iPhones and iPads running iOS 7.0 and later. Because the connection between the iOS device and the Mac is based on a lightning or 30-pin cable, there is no need to worry about firewall settings, Wi-Fi speed or an 802.11n network.

Duet Display is not for everyone as some people won’t need a second display, but if you do, having it as an option will definitely beat out most secondary monitors because you can prop up your iPad while on the go and have an amazing second screen experience.  Dragging a flat screen monitor to a coffee shop is just not practical. I believe Duet launched at a promotional price of $9.99, but has since gone up to its full price of $14.99. In my opinion, this is not a bad price considering what you are getting out of his app. 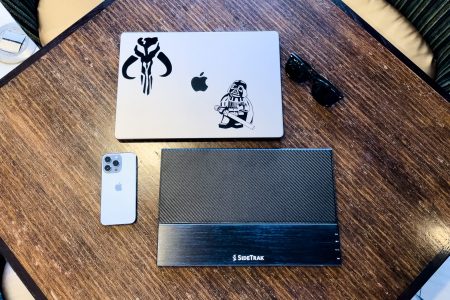