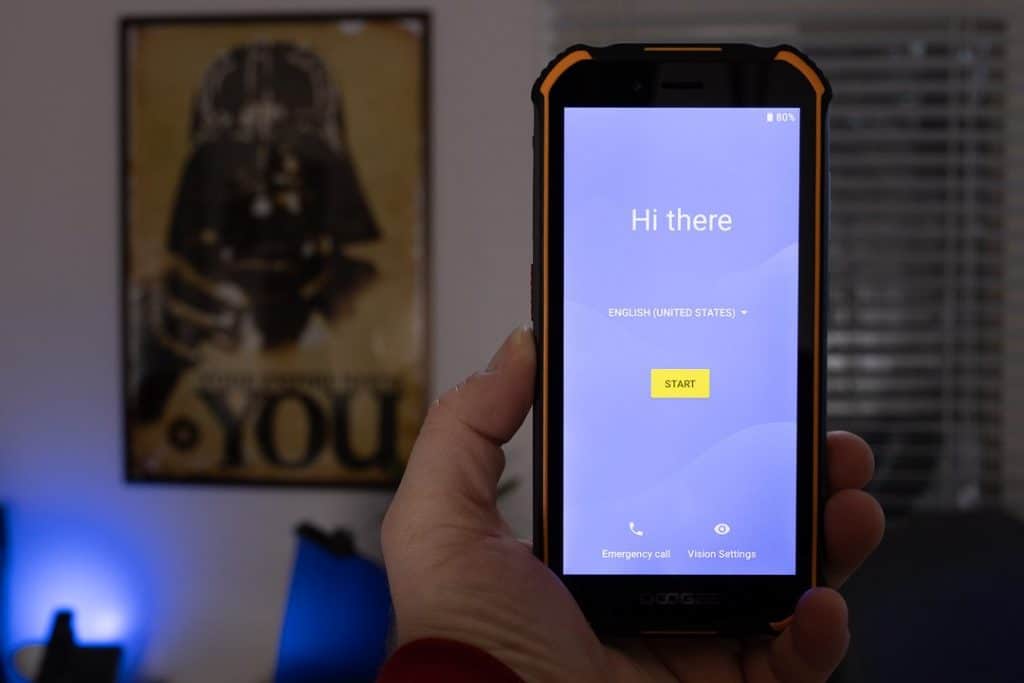 As tough as smartphones are today, they still aren’t impervious to hardcore wear and tear like what you might find as a hiker or construction worker. There are some, however, that are ‘properly rugged’ and designed to handle the elements. One such phone is the S40 Lite from DOOGEE. DOOGEE is a technology company that started in Spain in 2013 and one year later, they unveiled their first smartphone. Today, it’s one of the world’s leading rugged phone brands. One of the models that is available is the S40 Lite. It’s a rugged Android-based smartphone (running Android 9.0 Pie) that is rated IP68 and is designated as shockproof, waterproof, and dust-proof.

The S40 Lite can withstand up to 30 minutes submerged in up to 1.5 meters of water, 24 hours beneath 1 meter of concrete, and 1.2 meter drops. The phone can also handle extreme temperatures (~20º C – 60º C). The phone is constructed with first-class materials including reinforced aluminum alloy, TPU and polycarbonate, and Corning Gorilla Glass 4. The display is 18:9 and 5.5” in size. The phone will work on 3G networks and features a quad-core CPU and 2GB RAM + 16GB ROM. The battery has a capacity of 4,650mAh and charges using Micro USB. The S40 Lite also has a customizable button that can be used for SOS, switching to game mode, or to use the water camera. The phone does feature a fingerprint scanner on the backside of the phone and facial recognition.

I’m an avid iPhone user and I have been for many years. I do dabble into Android devices from time-to-time, but for the most part, I stick with the iOS devices. I must admit that I was intrigued by this Android device though because of its rugged nature. I do like that it is designed to take on the elements rather than be destroyed by them. Out of the box, I noticed some things right off the bat. For one thing, the phone feels great in the hand. It’s only slightly bigger than the iPhone 11 Pro and it’s close to the same weight. One other thing that popped out to me was the multipurpose key on the left side of the phone. It sits just below the SIM/TF Card slot and it’s outlined in metallic red. I like that the metal finish calls out the button, but think that it’s odd that the button doesn’t match the orange highlight color on the rest of the phone.

After turning the phone on,  I connected it to WiFi and started using the phone’s features. Since my primary phone is an iPhone 11 Pro, I did find the operation of the phone to be a bit laggy. Every time I switched screens or loaded an email through Gmail, everything seemed to be jittery. That said, I did love how easy the face recognition was to set-up and the quality of photos I took was very good. The facial recognition was ok in terms of function. It worked really well 8 times out of 10. Those other 2 times, I would have to enter my passcode. I didn’t have any issues using the fingerprint sensor.

Unfortunately, I can’t comment on how well the cellular features work on this phone because I have Verizon as my carrier and in our area, it’s only a 4G network. The S40 Lite does not work on 4G networks.  According to DOOGEE, the S40 Lite is a 3G Global Smartphone and it supports worldwide 3G frequencies, but it does not support 4G networks. With that in mind, I tested out the phone’s features as best as I could on WiFi.

There were a couple of odd features I discovered with the S40 Lite. First, the manual that comes with the phone is very generic. It seems as though maybe DOOGEE uses the same manual for every phone because it doesn’t make mention of specific features or model numbers. I also noticed that on one of the diagrams of the phone in the manual that has the charging port on the phone labeled for USB-C. This phone uses Micro USB to charge. In my opinion, I feel that Micro USB is out-dated technology and that any smartphone made in the past 2-3 years should, in fact, be using USB-C as its charging connector.

The S40 Lite is a capable phone and I can recommend it for rugged activities such as camping or hiking. I think it’s a robust device and it’s functional. Is it something I’d want to use on a daily basis? Probably not, but it is perfect for those rugged excursions where you want to take something with you.