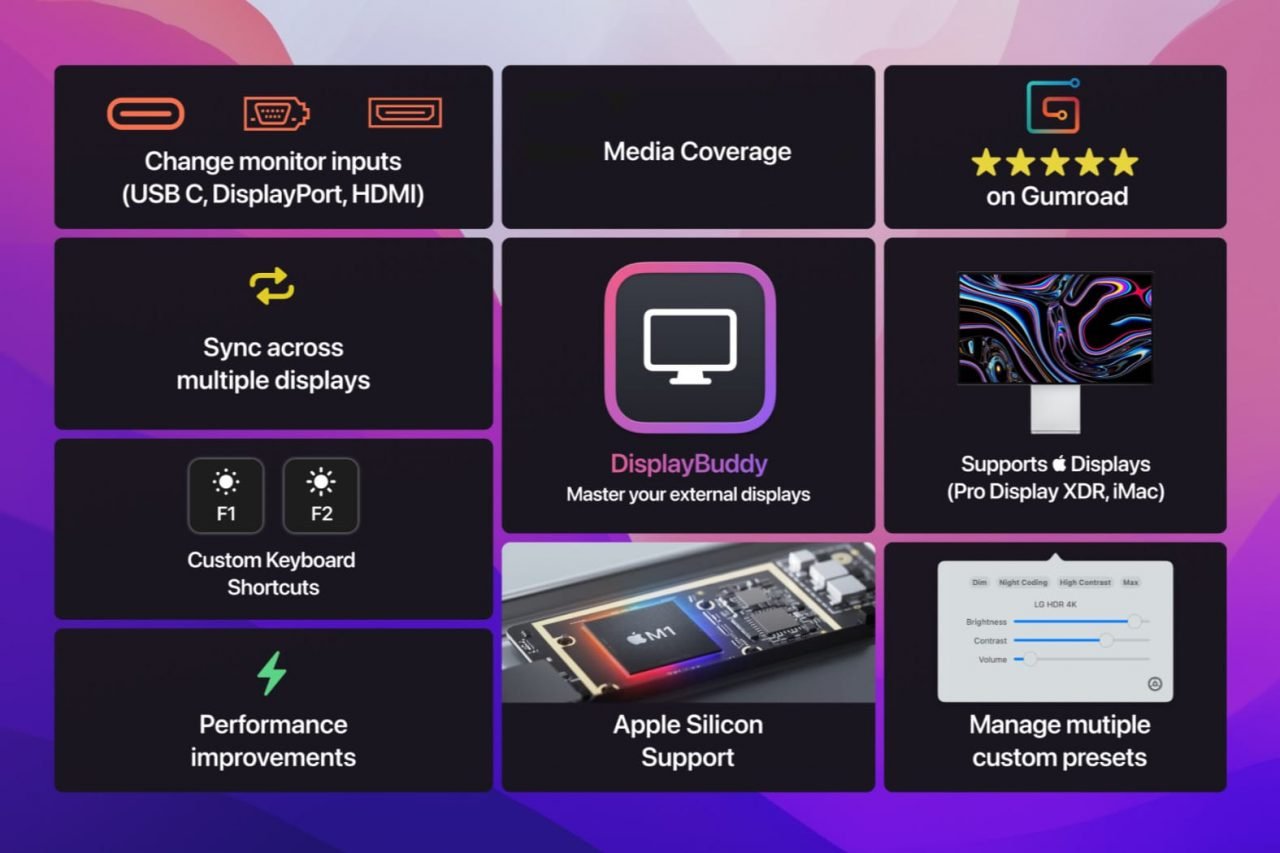 Even though I experienced some issues, I was able to get DisplayBuddy to work flawlessly with the right type of monitor. The developer does offer a full refund if you end up not having a compatible monitor. When DisplayBuddy works, it works really well. It makes it possible to control your monitor's settings without needing to use those annoying buttons on the base of the monitor. The price is a little high based on what it does as a utility, but since you only have to pay a one-time fee, it's a reasonable investment in an app that works as well as DisplayBuddy does.

One of my greatest pet peeves with using external monitors is that you have no control over their settings. The problem is that you end up having to guess which buttons do what. I currently use a Viotek GN34C Ultra-wide QHD Curved Monitor with my workstation and it has small, nondescript buttons on the bottom of the screen’s frame that control the display’s menu system.

Whenever I want to change the brightness settings or anything else I have to access the menus for, I struggle to find the right button combination. This is why I’m glad that are helper utilities such as DisplayBuddy that provide users with remote control over their display’s controls.

DisplayBuddy is a Mac app that is designed to allow users the ability to control their external displays from their menu bar. The app features native support for almost all monitor brands and is fully supportive of Apple Silicon and Intel Macs. The app features advanced features such as input switching, monitor power off, presets, and hotkeys.

DisplayBuddy was first launched in February 2021. It’s a fully native Mac app built primarily in Swift along with some Objective-C and C. The developer, Sid, is an independent developer based in Singapore. He has been making iOS and Mac apps professionally for the past 6 years. He’s also an avid open source contributor.

As of May 10, DisplayBuddy officially made more than $10,000 in sales and the developer is working on adding user-requested features such as screen resolution control, support for Sidecar and Airplay displays, and saving display arrangements with presets.

According to the developer, DisplayBuddy does not collect any data/info linked to the user’s identity.

DisplayBuddy can be purchased through the web store and Setapp. The web store version is a one-time fee of $12.99. The developer provides a full refund within 7 days of purchase and there is a 7-day free trial through Setapp.

While I have access to Setapp, I opted to download the web store version of DisplayBuddy. Once you purchase the license, you are provided the download link which gives you a DMG file. After the file package is installed on your computer, you will be asked to validate your purchase by entering your license key. The next screen you will see is a disclaimer that reads:

DisplayBuddy uses the DDC-CI protocol to communicate with your external monitors. Because of wide variety of display manufacturers and Mac models, some or most features might not work for you. If it doesn’t work for you as expected, you are entitled to a full refund of the cost of Display Buddy within the first 7 days of purchase.

Users must agree to this disclaimer before proceeding with the installation process, but once the agreement is made, you can use DisplayBuddy by clicking on the menu bar icon.

The options from the menu bar icon are simple. You are given Brightness, Contrast, and Volume as your main controls. If you want to use additional options, you will need to click on the gear icon and select Preferences. Inside Preferences, there are four tabs – General, Presets, Keyboard Shortcuts, and About. The About tab only shows what version you are currently using and options for contacts through email and Twitter.

The General tab gives users the ability to select options such as checking for updates automatically, launching DisplayBuddy at login, using a modern app menu bar icon, and enabling the reading values of monitor controls (brightness/contrast). There is a note that states if DisplayBuddy cannot automatically read the values from your monitor, the option will be automatically disabled.

The Presets tab shows a list of presents that you have created. I currently have one preset that is named Super Bright as I have the Brightness setting and Contrast set to 100%. Finally, the Keyboard Shortcuts tab gives users the option to set shortcut keystrokes for the different features within DisplayBuddy. By default, they are not set to anything.

For the most part, DisplayBuddy worked just fine. I was able to change the brightness and contrast on my monitor using the sliders in the menu bar app. Unfortunately, I did run into some technical issues with the app. At one point, after I updated the app to its latest version (1.22), the app started locking up on me and becoming not responsive when I tried to slide either the brightness or contrast slider. And, because it’s a utility app, I had to Force Quit the app from Activity Monitor.

I attempted removing and reinstalling the app when I started experiencing these issues, but that didn’t change the outcome. So, I removed the files again and then tried installing DisplayBuddy using Setapp. At first, it seemed as though the installation process went smoothly, however, the utility did not load.

It was just nonresponsive when I clicked on the DisplayBuddy icon in the menu bar. I left the app alone for a few minutes and the app finally started responding. I tried to set the Brightness level again and the app locked up. When I say ‘locked up,’ I am referring to seeing the spinning beach ball that is synonymous with Mac apps that are nonresponsive.

Fortunately, I had a second monitor available so I swapped my Viotek out for the ViewSonic VP3481a Ultra-wide QHD Monitor. The first monitor I tested was connected to my MacBook Air through a docking station. I used an HDMI cable to connect the monitor to the dock and then a Thunderbolt 3 cable to connect the laptop to the dock. So, when I started having trouble, I backtracked how the monitor was connected when I switched units to make sure it wasn’t a faulty connection.

First, I connected the new monitor directly to my laptop using a DisplayPort to USB-C cable. It worked and I didn’t have any issues controlling DisplayBuddy. Next, I connected the new monitor to the dock using a DisplayPort cable, and the laptop was connected to the dock using the Thunderbolt 3 cable. Still, the app was able to control the settings of the monitor with no operational issues. Finally, I attempted using the same HDMI connection as the first monitor.

Again, DisplayBuddy controlled the new monitor just fine without locking up. I was also able to set a preset and play with the settings back and forth quite a bit without the app freezing. Because of this, I determined that the issues I was having were likely caused by incompatibility with the first monitor. This is something to be aware of when you use DisplayBuddy. The developer tries to cover as many brands and models as possible, but can’t cover every single option.

And even though this feature didn’t affect me, I found it very strange that there is an option to change your input source if it’s an experimental feature that could “brick your display.” I would think if it’s that experimental that it shouldn’t be included in a public release. I did not attempt to use it, but I did click on the feature so that I could view the disclaimer that is associated with it.

At first, I was thrilled with DisplayBuddy. It was easy to install and it worked great with my external display. The hiccups I ran into with the first monitor were not caused directly by the app and since I got them fixed by swapping monitors, I think DisplayBuddy is well worth using.