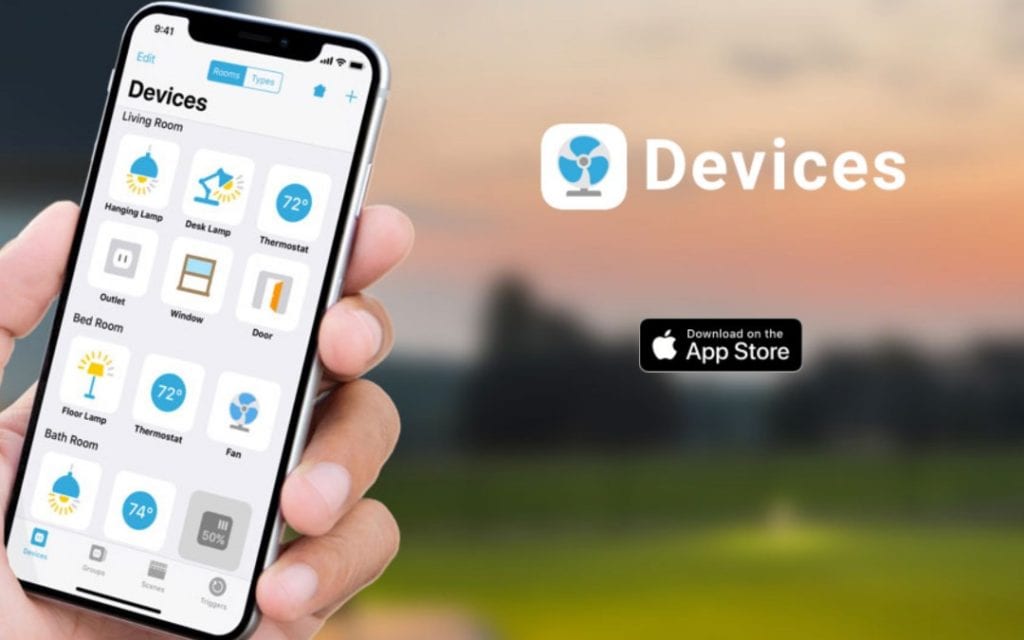 Super Clean Interface that Apple Should Take Notes From

Our home has slowly become a smart home. We’ve been adding smart lights here and there and have several options for voice assistants throughout our home. Because of this, we find ourselves constantly moving between several apps (Philips Hue, LIFX, Nanoleaf, etc.) to navigate settings for each of our smart devices. It’s true that Apple’s Home app consolidates any items that are HomeKit compatible, but I’ve always found the app’s design a bit clunky. Functionally, it works, but I would really prefer something with a cleaner interface. With that in mind, I decided to revisit an app that we reviewed on MacSources a couple of years ago that is a decent alternative to the Home app. Devices is an intuitive HomeKit hub app for iOS that can really make life easier for those who find themselves in the same situation I have been in. 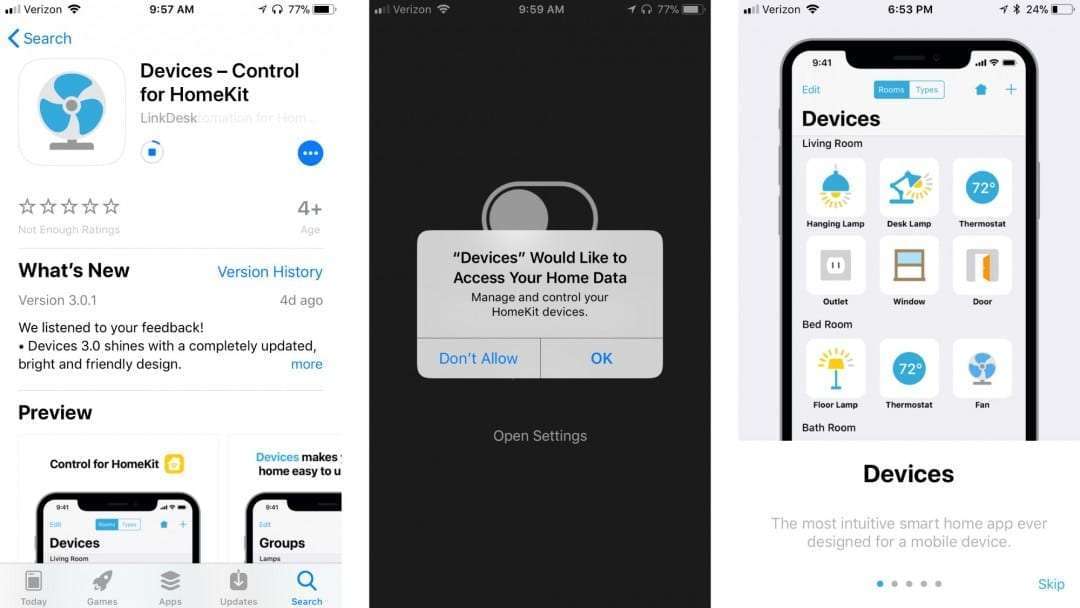 Devices is, as I mentioned above, a HomeKit management app. It allows you to control and manage all the smart home devices in one succinct app. Each type of device (light, fan, switch, etc.) has its own icon in the dashboard so that you can quickly locate the items you are looking for without fumbling through a vast system of menus. Devices will also give you control over groups, scenes, and triggers that are set up for your smart devices. The app requires an iOS 9.0 or later and at least one smart home device that is compatible with Apple HomeKit.

Devices 3.0, which was a complete overhaul of the app was released on March 13, 2018. This app update launched a bright, fresh design to the app, which included time-of-day lighting enhancements (the app will adjust the interface setting between bright and dark depending on the time of day). Now, there is language support for French, Italian, and Chinese speaking users and the app is optimized for iPhone X. Devices is currently on version 3.0.1, which was released on March 14, 2018. I like that the developer seems to be aware of bugs and is constantly trying to improve the app for users.

Some of Devices main features include: 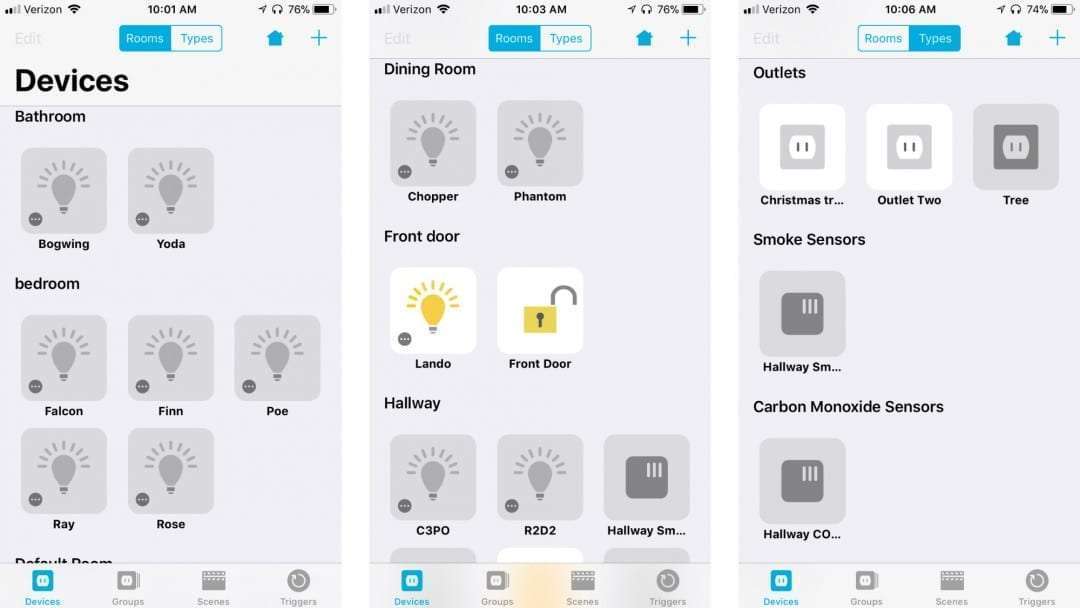 Since it had been a couple of years since I looked at Devices, I was blown away by the number of improvements that developer, Link Desk, has incorporated in that time. The interface is completely different from the previous version and it’s easier to work in — especially if you are familiar with Apple’s Home app. Devices have a much cleaner, well-thought-out UI than the Home app, but they are similar in functionality.

When you first open the app, you will be asked for permission to access your Home Data. you will want to allow this permission because it is what connects all your previously programmed devices into this app. After you tap ‘ok’, you will be taken through a short series of screens that showcase the features of the app. At the conclusion of the screens, you tap the ‘get started’ option at the bottom of the screen and your dashboard opens up. All of your HomeKit enabled devices should load into your dashboard by room. For example, I have two Hue bulbs in my bathroom. So the first room that appears is my Bathroom and inside that room are the two lights. If they are currently on, the icon will show in color rather than grayed out. You will notice in the bottom left corner of some of the icons, there is an ellipses icon. When you tap on that, it will give you further instructions about customizing each smart device. To me, it’s an indication that you can do more with that specific device rather than just turn it on and off.

In addition to Rooms, Devices will also sort items by Type. For example, if you want to look at all the outlets you have connected to HomeKit, you can tap the Types tab in the dashboard and scroll down the screen until you come to “Outlets”. All your outlets should appear. Depending on your type of use and interactivity with your smart devices, this can be a useful option to quickly locate certain products.

I was surprised to find that the app is now a ‘freemium’ app (offers in-app purchases). When we reviewed it before, LinkDesk offered it for $2.99. Now, it is a Free download, but you can purchase additional triggers for $0.99. 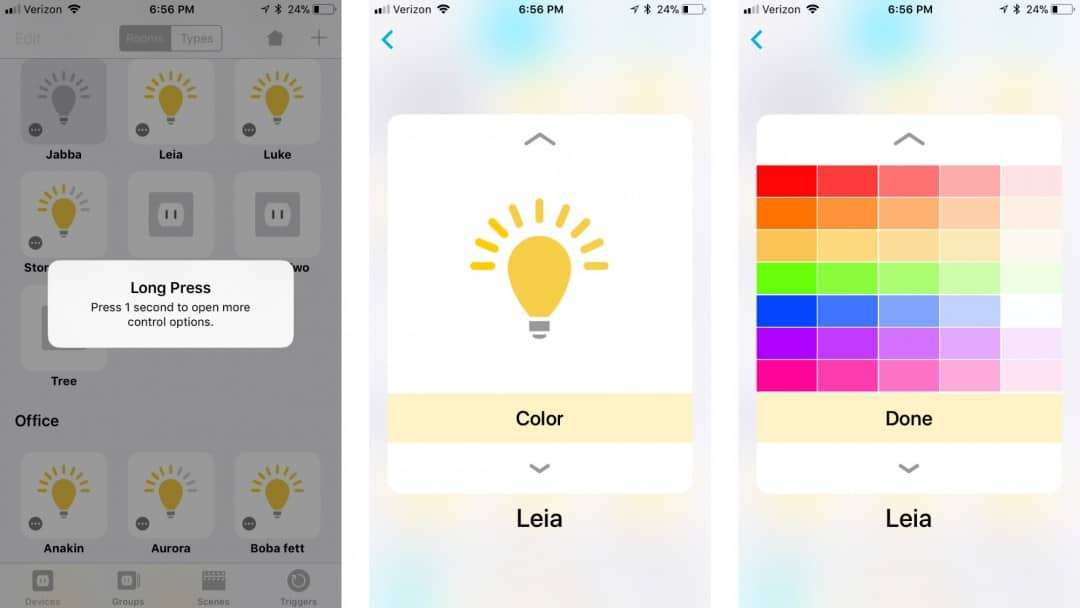 As lovely as this app is, my fiance and I did find a few areas for potential improvement. First, our HomeKit data is set up under my account, which I then share with her. So, as the person sharing the HomeKit data, she has certain limitations for editing inside Devices. We also found that there were some issues with connecting/controlling some of the devices when she was not on our home network. The devices would show up with their current status, but she couldn’t do anything with them. For example, a light in our front hallway would appear as ‘on’ in Devices, but when she tapped it to turn it off, it would stay on and appear powered on in the app when it refreshed. She did not have the same issues with Apple’s Home app though.

Devices won me over with its clean, modern designed interface. The design of an app really goes a long way with me and Devices is so neat, clean, and organized that it is just easier to manage our HomeKit devices from it rather than the Apple Home app. As I noted, we did find a few bugs when using the shared account, but I believe that will be fixed in an app update in the future. If you have HomeKit devices, I would suggest giving Devices a try.