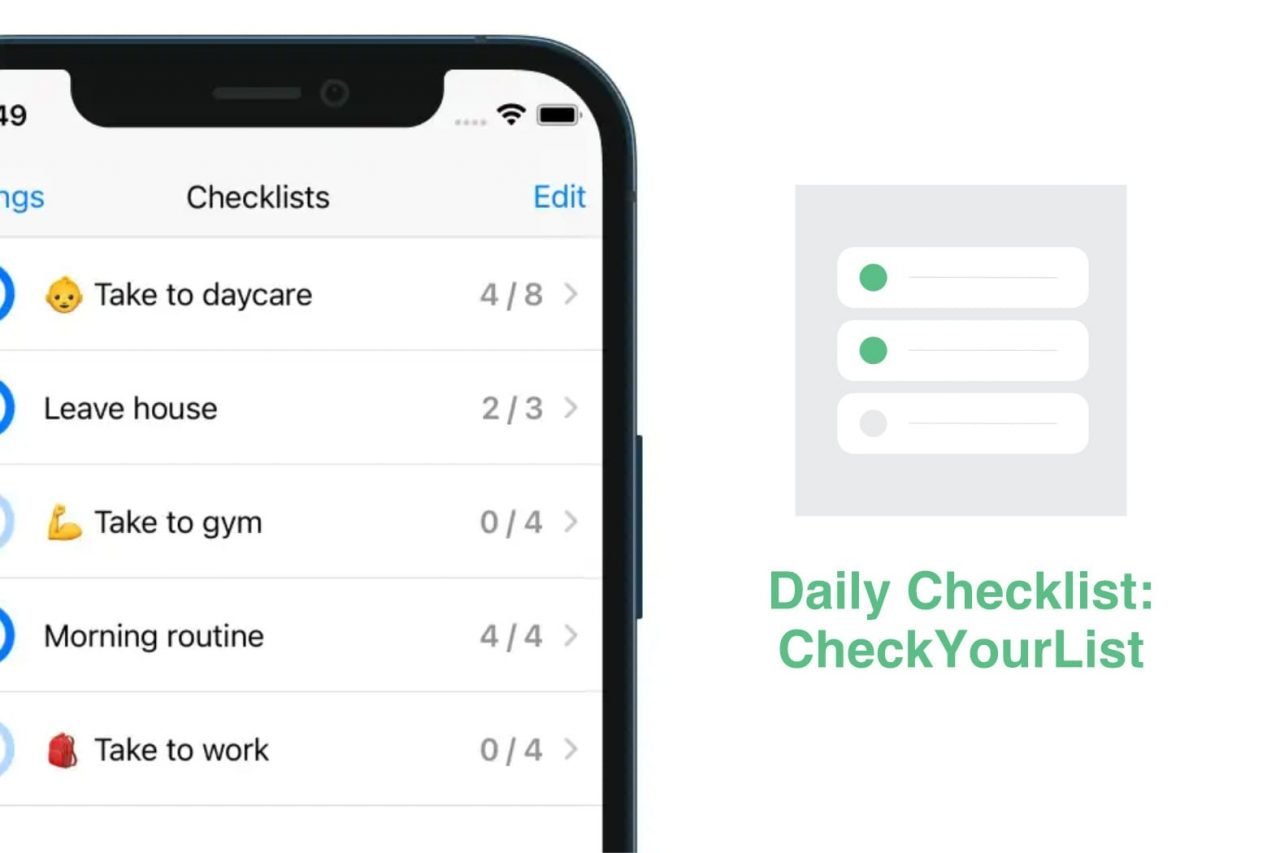 CheckYourList is a remarkable productivity app that provides users an option to utilize reusable lists. The app has a smooth, clean user interface. The pricing model is subscription-based, which helps to support the independent developer who maintains and adds new functions to the app over time. The prices are higher than similar apps, which is the reason for the lower rating for PRICE. I'm eager to see how the app develops over time.

CheckYourList takes a load off your mind so you can focus on what’s important.

I am a list maker. I usually have no more than 3 lists going at one time – and that’s usually just the ones I have on paper. This can get confusing (even to me) and ultimately, it’s not very productive. I’ve been trying for a very long time to switch over to a digital list option, but none of them have really satisfied my needs. I have started using Todoist for my daily task-tracking, but when it comes to recurring lists, I’ve started using a really nice mobile app called Daily Checklist: CheckYourList.

CheckYourList was designed to help users feel less overwhelmed with daily, repeatable tasks. It has a simple user interface that is easy to understand and intuitive. The app lets you create lists that can be used spontaneously. Items can be checked off, cleared, and reused again. CheckYourList is ideal for lists such as packing lists, daily routines, cleaning lists, and other tasks you do on a regular basis.

The app was designed for individuals with ADHD by someone with ADHD. The developer, Spencer Walden, revealed that after the birth of his son, his ADHD caused him to feel overwhelmed by ordinary tasks.

I built this app to help with my ADHD. I found myself forgetting things more and more after the birth of my son. Dropping him at daycare and then going to the gym, required so many things. I felt overwhelmed and would take ages to leave the house. I wanted a solution, so I built this app. Now I run through CheckYourList and am confident I have everything I need.

Walden let us know that the app is built using only Apple technologies with the UI and logic being built with Swift/SwiftUI. The app’s data is stored locally on the device with Core Data and Apple’s CloudKit is used to sync and backup data.

The app was first launched on June 30, 2021, and is currently on version 1.2.2 with the last update happening two weeks ago. Walden actively works on improvements to the app and keeps an open page that contains all of his downloads, revenue, traffic, and other tasks he is working on. He shares it all on his website.The app is built using only Apple technologies the UI and logic is built with Swift/SwiftUI, it stores data locally on the device with Core Data and uses Apple’s CloudKit to sync and backup data.

CheckYourList is built for iPhone, iPad, and Apple Watch. It requires version 15.0 or later for iOS/iPadOS or 8.0 or later for watchOS. The app only requires 2.6MB of space on the iPhone and it is available in English and French. The app can be downloaded directly from the App Store.

CheckYourList can be used for free, but it is limited to two checklists. To unlock the full version with unlimited checklists, a user may choose to pay a monthly ($4.99) or yearly ($29.99) subscription fee or purchase the lifetime license ($49.99). (All prices current at the time of publishing.)

The app just recently moved to a subscription model for the Pro version. Walden documented his reasoning for the change via his Twitter account.

My goal is to develop CheckYourList.app to help people live their best, most organized lives. To this end I’ve moved from an in-app purchase to subscriptions. It’s a lot of work building and maintaining an app like this, especially keeping it relevant and working with new iOS releases.

I used to be very against app subscriptions until I realized it was the only way for my app to exist longer than a few months. Larger apps, with large teams behind them, actually set the expectation of fairly low prices for apps, because they have the user base to do so. For indie devs to survive, we rely on fewer customers, and if an app can’t financially support itself, it won’t exist anymore.

Some of the backlash I’ve gotten is the high price of the lifetime unlock. The reason the lifetime unlock seems high, is because it has to cover years of use and upgrades. Three years from now, the app will still need to sync, function and keep up to date with iOS. With me providing support, fixing bugs and helping users all that time. We need more innovative apps, supporting indie developers is one way to do so.

When you start using the app, it’s completely blank. It’s just a black screen with the word “Checklists” at the top in white. There is also an Edit option, Add Checklist, and a hamburger menu. This is the main screen of the app. As you add lists, they will appear here. The hamburger menu opens up the help screen, which features options for support, legal links, an option to copy a support ID, and a button at the very top that shows what version you are using.

When you add a checklist, you have the option to name it, add it to a group, select whether or not you want the completed items moved to the bottom of the list, and a color for the list bubble on the main screen. That bubble will change to an icon for a group.

As you mark items off your list, they will be crossed off and the bubble for the list will fill in to show the progress you have made on that list. When every item is checked off, the app will give you a prompt that reads, “Checklist Complete! Would you like to uncheck the checklist?” This is a great touch because it unchecks all the items in bulk rather than you having to do it one by one.

I will admit that I was skeptical at first. When I originally saw the description of CheckYourList, I thought, “That’s all I need. Another ‘to-do’ list app.” To be honest, I was starting to accumulate reminder apps like I gathered sticky notes on my desktop. It was getting overwhelming. Then I caught the keyword – recurring checklists. That made me take a second look.

CheckYourList is an extremely clean app. It works very smoothly and the iCloud sync between the devices is quick – nearly instantaneous. I have been very impressed with how well the app works and all the little details that are worked in. On the surface, it looks like such a simple app, but there is really a lot built into it. For example, the progress indicator for the list filling in as you check off items is outstanding. I wasn’t expecting that, but I LOVE that it is included.

The entire purpose of this remarkable app is to provide an option for users to create checklists that can be reused. How many times have you gone to the grocery store for the exact same items? How many times have you started your weekend knowing you had a certain number of repetitive tasks that needed to get done before Monday? I go through patterns every single day and even though I’ve never been diagnosed with ADHD, I do get scatterbrained. I do get ‘busy’ and forget the smallest things. CheckYourList is a really big help during those times.

There are some tasks I can do on autopilot, but things do fall through the cracks – often. Being able to check items off a list and then have that list again the next time that repeating event comes up is priceless. I set up a few lists just to get started (Saturday, Work Startup, Evening tasks, Morning tasks, Groceries).

I have created one group for daily tasks and my fiancé Nick, who is a photographer, has created an entire set of lists that features different types of load-out lists. These lists feature the different pieces of equipment that he takes with him on different types of jobs. He also created a list for traveling since there are a lot of the same items that he packs for every trip (i.e. toothbrush, body wash, medicine, etc.).

As far as use goes, all the apps have been very responsive. I think I’ve been the most impressed with how well the Apple Watch app works. It’s quick and I can easily mark items off my list without the need for my phone or iPad nearby. This comes in especially handy when I am doing things like packing for a trip. I can move around freely and be able to tap the items off my list on my watch. It really adds to the user experience of the entire app system.

At this point, I think the only criticism I have is based on the pricing of the app. I have been a naysayer of apps that have subscription models ever since Adobe moved Creative Cloud to one, but I’ve slowly been coming around to the need for ongoing fees for apps like this that are being continuously refined and updated. That said, I do not disagree with using a subscription model, however, I think the pricing might be a little higher than other apps in the same category.

I did a quick check on this by spot-checking five apps in the App Store that were either found by using the keyword ‘checklist,’ ‘repeatable checklist,’ or ‘checklist reuse.’ I found the average price was around $3 as a one-time fee. Of those five apps, three of them were from what seemed to be independent developers and two were larger companies. I also noticed that none of these five apps had a subscription model applied to their pricing structure.

As I said, I don’t disagree with using a subscription since there is active development and upkeep of an app like this, but I think that maybe the price level should be evaluated.

CheckYourList is an amazing app that can really help people make the most of their days. It helps take the stress off a scattered mind (like me) that constantly has new pieces of information thrown at it. With this app, I am able to keep those recurring lists separate from my individual daily tasks and I don’t have to worry about them anymore. It takes a load off my mind.

I can wholeheartedly recommend CheckYourList as a great way to keep your tasks organized and be able to repeat them as needed. It’s a beautifully designed app and it has a lot of potential for future growth.