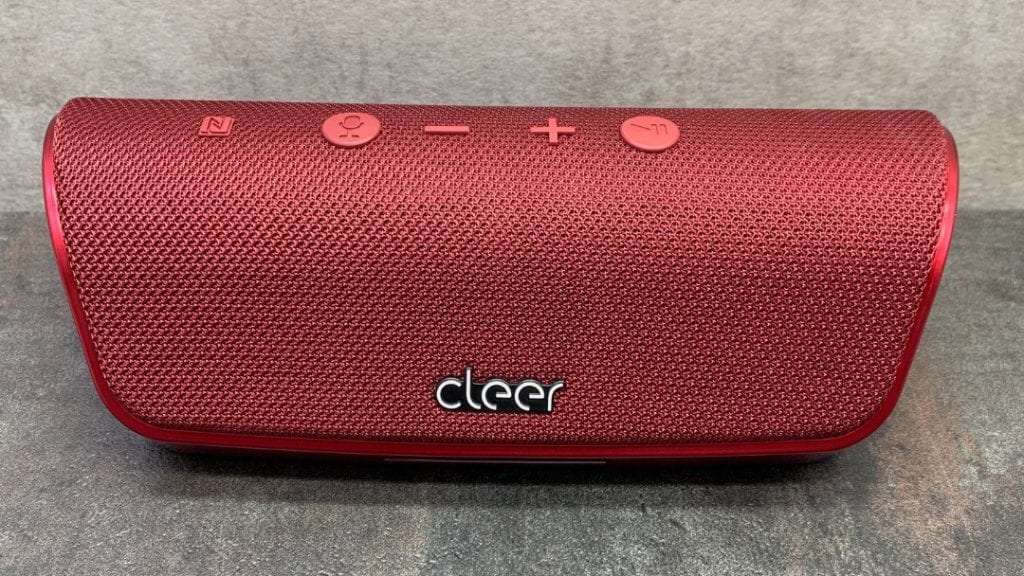 Powerful, portable, and peppy, the cleer stage rugged speaker design will persuade you unto new pursuits.

If you asked me which season was my favorite, I would struggle to choose between summer and fall. However, if hard-pressed, I would err on the side of the more temperate fall season. As the temperatures become more reasonable, my family cautions away from the comforts of airconditioning and back into the allure of nature. From camping, to family bike rides, to hayrides, to Halloween, my children seem to enjoy their outdoor time just as much as their home. Despite the change in venue, however, you cannot separate them from music. Luckily, cleer audio has just the device for an on-the-go, adventurous lifestyle.

The Cleer Stage Portable Bluetooth speaker arrived in a 10 inches long by 6 5/16 inches wide by 3 1/2 inches thick retail package.  The attractive cover provided a 7 1/4 inches long by 3 1/4 inches wide image of the speaker, resting obliquely across the panel, a maroon cleer title along the top left and STAGE in silver/gold font along the bottom right.  Along the bottom left, I found the Amazon Alexa logo, detailing the ability to pair with the amazon ecosystem.  Additionally, along the bottom right, you will find icons for Bluetooth, microphone, 15Hrs battery, and a speaker/water icon.  The last icon was a little confusing as I did not know if this meant that the speaker would float or if it was water-resistant (more below).  Either way, the cover panel proved to be incredibly educational.  I loved the speaker image, the use of shadowing and the front blue LED, which reminded me of the light on the front of K.I.T.T. from Knight Rider.  Adding to the sci-fi feel of the packaging, the top and bottom panels assumed a Minecraft-esque blocky grey-toned creeper pattern.  Each of the side panels added to the overall ambience of the packaging as well.  One of the side panels showed a smartphone and the cleer connect app and the ability to pair two speakers together. The other panel provided a list of contents: Stage speaker, Charger, Micro-USB Cable, Carrying Pouch, and the Quick Start Guide.

Turning the packaging onto the cover, the back panel provided the maroon cleer logo along your top left, the silver/gold STAGE along your top right, and a small 3 1/2 inches wide, obliquely oriented, rear view of the Stage Speaker.  Along the left, you will find five icons detailing the Ask Alexa feature, the 15Hrs Extended playback feature, Rugged good looks (IPX7 wate-resistant), Cleer Connect feature, and Hands-Free Convenience.  The reverse panel added the missing information about the floating speaker icon on the cover.  According to the IPX7 rating, the speaker could survive down to a depth of 3 feet/1meter for about 30 minutes.  Lastly, the reverse panel provided some information about Bluetooth and provided the product UPC.  The magnetic bottom panel of the packaging flipped up, revealing the same grey-toned geometric pattern as the outer flap.  I lifted the inner flap upward and admired the colorful, energetic, “BE IN THE MOMENT” party scene with the cleer stage speaker upon a deck/table.

I lifted the thin black foam panel and found an 8 1/2 inches long by 3 1/2 inches wide by 3 inches tall speaker (speaker 1 was grey, speaker 2 was red).  Resting alongside the speaker, I found a 9 5/8 inches long by 2 7/8 inches wide by 1 5/16 inches thick, unlabeled, cleer stage accessory box.  Within the box, I found a convenient mesh zippered pouch, a Type A wall adaptor with USB-A port, a 40 3/4 inches long flat-grey USB-A to USB-micro cable, and a cleer stage quick start manual.  Before evaluating the speaker, I perused the accessories. The visual appeal of the grey/black mesh bag rivaled that of the speaker itself.  I loved the single metallic zipper, with rubberized coating and “cleer” etched into both surfaces, as well as the included carabiner, which was attached to a 3/8 inches wide by 3/4 inches long nylon fabric loop.  The U-shaped fabric flap magically disappeared when zipped closed and opened smoothly via the single zipper.  I have seen several water resistant zippers but I was quite impressed with the zipper closure of the mesh bag.  Each of the side panels and the spine were composed of a black leathery material, while the inner surface of the bag was felt lined.  The bag fit the cylindrical speaker like-a-glove but may pose a small challenge if you never played the childhood shape sorting game.  You will need to rotate the speaker until the contour of the speaker matches that of the bag.  Jokingly, this step was not that difficult.  With the speaker nestled securely inside of the bag, close the water-resistant zipper and attach it to your backpack or belt-loop with the included carabiner.

The surface of the grey speaker matched that of the grey mesh bag, but this was not true for the red speaker. The frontal panel of both speakers had a 2 1/16 inches long by 1/8 inches tall LED status bar.  Just above this, you will find a silver/black cleer icon and then atop the speaker four buttons (microphone, volume down, volume up, play/pause).  Along either side of the speaker, you will find a 1 3/4 inch diameter passive speaker radiator.  Along the back of the speaker, you will find a 3 inches long by 3/4 inches tall power panel, which had circular power and Bluetooth button bookends.  The two buttons flanked a 1 1/6 inches long by 3/8 inches tall access panel, which housed the micro-USB input port and 3.5mm input port (cable not included).

Before you use the speaker, you will need to charge it fully with the included USB-micro to USB-A cable.  You can either plug it into a computer/USB-A port or you can use the included adaptor.  To enjoy the 15 hour battery, you will need to charge the 5200mAh battery for about 2 hours.  When fully charged, press the power button and the speaker will power on.  Short press the Bluetooth button to activate the Bluetooth search mode.  On your smart device, navigate to Settings, to Bluetooth, and then select cleer stage from the list. There were no vocal cues to alert you, which was somewhat odd considering the features of other similar devices.  With the speaker set to full, I headed to our local park, cranked the speaker to maximum, and sat about five feet away from the speaker.  Using the DecibelX app, the speaker registered 75 decibels. While my daughter played at the park, we listened to a variety of Disney themed songs, a few songs from Laurie Berkner, and a few from Imagine Dragons.  To enhance the sound, I navigated to the iOS App Store and downloaded the Cleer connect app to pair two speakers together.  Make sure both speakers are paired to your smart device and that the App is turned on.  Press “HOW TO PAIR” along the bottom, the small pairing icon, and then follow the on-screen prompts to add Amazon Alexa features.  If you simultaneously long-press the Bluetooth buttons, the front LED’s will turn green.  With both devices playing the same music, although in stereo mode, the decibel App read 87 decibels in the same location.

You can play/pause music or pick up/hang up a call using the play/pause button.  Each of the cleer stage speakers had an imbedded microphone, which allowed me to talk directly to the speaker. If utilized indoors, the microphone seemed to work well.  Unfortunately, the microphone picked up the television and other ambient background noises.  This became quite evident outdoors.  The instruction manual provided a legend to understand the LED behavior.  A light blue led suggested that Amazon was Listening, a dark blue/light blue suggested it was thinking/speaking, a yellow light alerted you to the status that a notification arrived, a grey/yellow light suggested the notification was queued, and an orange light suggested that there was a system error. The Alexa features felt clunky and lacked the responsiveness of native Amazon devices. The feature was neat, but I did not find much of a use for it. My daughter was able to say “Alexa Play Moana” and the speaker activated Amazon Prime Music. To her pleasure, she was able to hear the soundtrack.

To test the sound output,  I navigated to audiocheck.net. I used the Low-Frequency Response and Subwoofer Audio Test (10-200 Hz) and heard bass at 30-40Hz.  Utilizing the High-Frequency Response and Hearing Audio Test (22-8 kHz), I was able to hear the test tone at 15kHz, which was the upper limit of my hearing.  After the above tests were completed, I tested the Left/Right/Center programming and found them to be programmed correctly.  With the volume set to full, the speaker filled a large living room and provided adequate sound on my deck. The low sounds were acceptable and the mids were reasonable as well. After my daughter and I jammed out to some Moana, I listened to some classics by Johnny Cash, “Carribean Blue” by Enya, “Bright Lights Bigger City” by CeeLo Green, the country version of “Ring of Fire” from Home Free, and “Sound of Silence” by Disturbed.  I was pleased with the clear volume and the smooth tones but wished that the speakers had a little more bass.  To further test the speakers, I listened to Queen “Somebody to Love,” “Bohemian Rhapsody” and selections from Billy Joel “Piano Man,” and “The Longest Time.”  I found that the speakers worked better with Pop songs than those that needed more bass.  I chose songs by Meghan Trainer, Charlie Puth, Michael Jackson, and Prince.  Then, my daughter wanted to hear “Get Back Up Again” from Trolls, and you better believe I turned the song on for her.  Dancing and enjoying her park excursion, I think I now have new park speakers.

If I were going to add to the design, I would work more on the Application. Specifically, I would like the ability to adjust between mono and stereo. The battery life of 12-15 hours and the rugged, waterproof IPX7, design were quite refreshing. I appreciated the overall design, the sound, the button features and would likely use the Amazon App if it worked more like that on my Echo/Dot/Auto devices. Vocally interacting with the speaker was a neat method to control the speaker because of the “always-on” nature. With above-average sound, the classy nature-resistant design, the ability to pair two devices together and the increased portability from the carry bag/lightweight design, the cleer stage speaker wants to be your EDC speaker solution. Even though it did not work as well as the native Amazon devices, it won its place upon the podium.