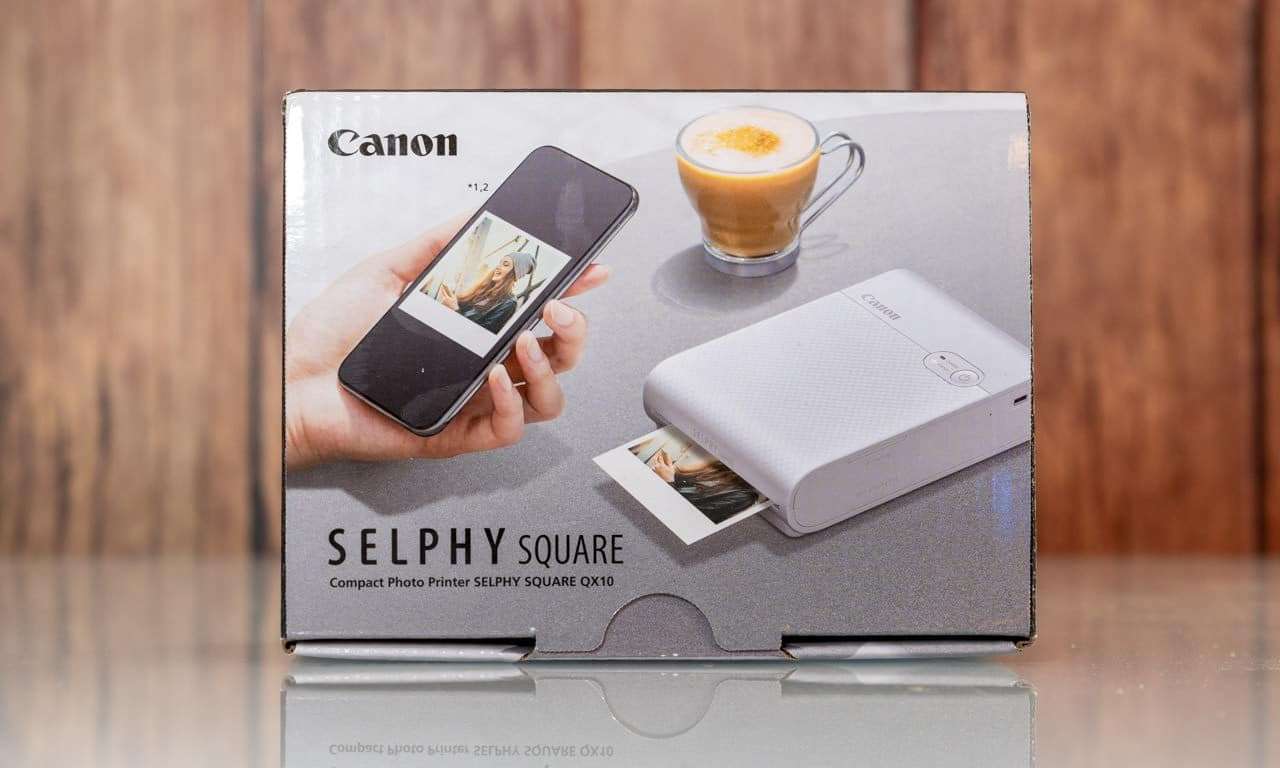 A printer that produces good prints, but lacks in the software and technical support area.

I come from a time when photos were captured on film and you had no idea what your image was going to look like until you get the film developed, which sometimes took 7 days for processing. I remember in my college days (20 years ago now) when we were still making scrapbooks with printed photographs. When smartphones became commonplace, we started seeing photos transition to the digital realm instead of the paper-based one. So what happens when you want to print your memories out to share? Do you go to a drugstore every time? What if you could just print the photos out at home? That’s what the Canon Selphy Square QX10 Wireless Photo Printer can do for you.

The Canon SELPHY Square QX10 is a compact, portable photo printer. It produces high-quality prints that can last up to 100 years thanks to the printer’s due-sublimation processing. The printer weighs less than one pound and it has a built-in rechargeable battery. The SELPHY Square products 2.7″ x 2.7″ prints on peel-off adhesive back paper and the ink film produces fast-drying images. The printer connects to your mobile device with the use of the Canon SELPHY Photo Layout 2.0 app. The printer uses Wi-Fi connectivity to communicate to mobile devices through the app.

The printer comes in a Canon-branded box and is well-identified for the consumer. The unit comes with a multilingual user manual, Micro USB charging cable, a starter pack of photo paper, and the starter ink cartridge. Before I even set-up the printer, I found things I would upgrade immediately — the charging cable and the starting kit. The charging cable is Micro USB, which in my mind is ‘old technology’. It doesn’t seem very forward-thinking of Canon to release a new product with this older type of charging cable. Is it more cost-effective? Probably – but it’s not future-proof. The other issue I have is that manual calls out using a wall adapter to charge the printer, but they don’t include one.

The other issue I had out of the box was the miniature starter set of paper and ink. The starter ink cartridge is only enough ink to cover the 3 sheets of paper included in the starter kit. According to the specs of the device, the printer can hold up to 10 sheets of paper. I think the sample kit should include at least that much and the ink cartridge should match that. It seems silly to me for the consumer to have to purchase those items right off the bat in order to get the most out of their device. Imagine if this was received as a gift and the giver didn’t realize that what was included was such a small sample? They would effectively be telling the recipient that they had to spend money to enjoy their gift. It looks like Canon sells the set for around $15 so I’m not sure why they wouldn’t just include one set with the printer when it ships.

The user manual booklet that comes in the box with the printer provides you with details on the device and then directs you to download the mobile app to complete the set-up. As it turns out, you can only print images directly from your Android or iOS smartphone (or tablets). The printer is not compatible with desktop computers. The first device I attempted to connect to the printer (via the app) was my iPhone 11 Pro. The instructions in the app tell you to scan a QR code that’s found inside the printer cartridge compartment. The QR code is supposed to connect you to the printer’s internal Wi-Fi network. I am assuming the code contains the Wi-Fi name and password for the device’s network. I tried a couple of dozen times to get this process to work and my iPhone would never connect. I tried to scan directly from the QR code on the plastic door of the compartment; I tried to scan the QR code from an enlarged photo I took; I tried to enter the information manually; I even tried deleting the app and reinstalling it AND resetting the printer, but I could never get the iPhone to connect to it. I kept getting a failure to connect message. Just as I was about to throw in the towel, I decided to pick up my iPad and give it a try. I downloaded the app onto the iPad and scanned the QR code and within a few seconds, the printer connected to the iPad. I still can’t figure out why there was a problem with the iPhone/printer connection, but I was at least able to use the printer.

Once the printer was connected, registered, and set-up, I selected a few photos of our family dog to print. The design interface of the Canon SELPHY app is pretty basic. You select your photo, choose a border size, the position of your photo, whether or not you want a date printed on the photo, choose a frame, add stamps or text, paint on the photo, select filters or embellishments, and then you print.

Photos take approximately 45 seconds to print. The SELPHY Square uses a process called dye sublimation. With this process, the ink ribbon is heated and transfers the dye to a special photo paper. This process gives printed photos a much longer life (up to 100 years in some cases) than Zink-based prints. Once you send a photo from the app to print on the paper, the paper actually makes four passes through the printer ribbon. On each pass, the printer lays down a color. It goes in this order – yellow, magenta, and cyan. The fourth pass is actually a clear coat that helps to highlight the photo and protects the image.

The quality of the photos are actually very good. So, even though it seems as though I have had a lot to complain about in this review, I can’t deny that the product the printer creates is very nice. One thing I wish the software would do a bit better is to allow for some color/brightness adjustments. One the screen I thought the photos looked fine, but when they printed out, they were a bit darker than I expected.

As far as cost goes, I the printer retails for around $150 and the Canon XS-20L photo paper and printer ribbon kit is around $15 for 20 sheets. That would mean that each print (not including this the device charge) costs approximately $0.75. To me, this is a tad on the expensive side of things since you can order larger photo prints from drugstores for about half the cost (4×4 print on standard photo paper is $0.39 per print).

The Canon SELPHY Square is a unique mobile printer, but I think the software really needs some upgrades to make it an exceptional product. I also think the support for it should be beefed up, too since I had a lot of trouble finding answers for issues I had when I was setting it up. I hope that Canon refines this product and its offerings so that the next version is better than the first.