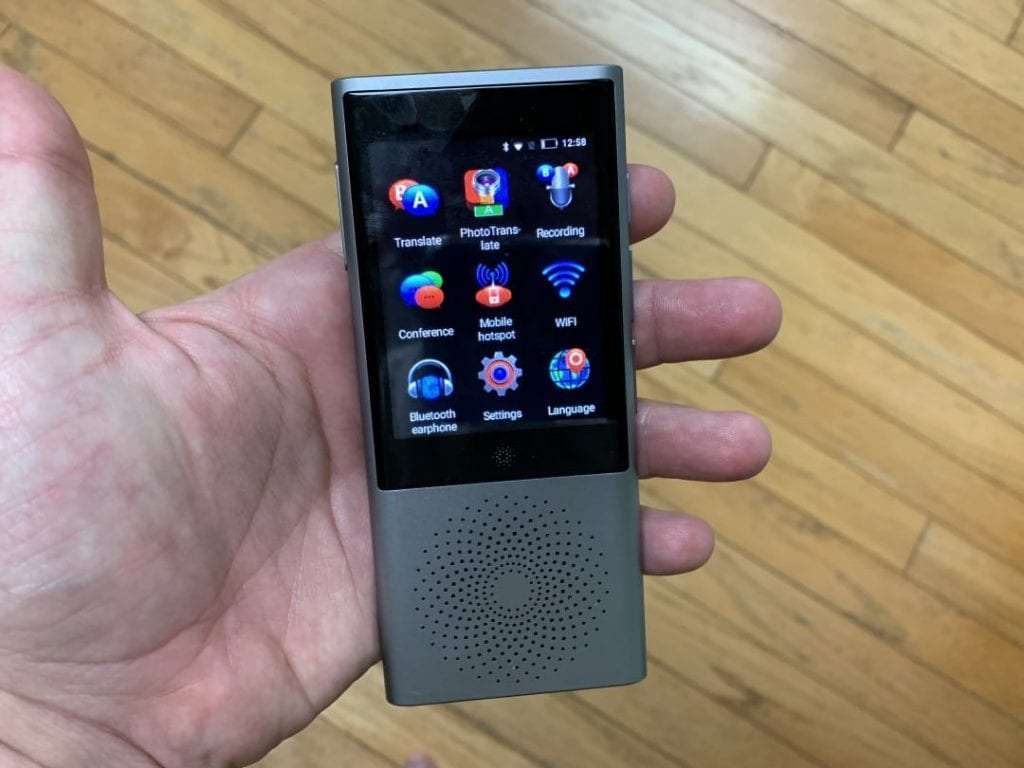 Have you ever traveled to a foreign country and struggled to communicate with the locals? Have you met someone in your own country who spoke a different language than you and attempted to converse?  Or have you simply wanted to know what a sign meant or what was on a menu?  If so, you understand the power of communication and more specifically, the need to inter-communicate.  I have longed for a Univeral Translator like the one presented on Star Trek The Next Generation, for a very long time.  It is amazing that technology has gradually made the Earth seem smaller, but we still have just over 7100 languages in our world.  How can our planet feel so small, yet our inability to understand each other is at the heart of most conflicts.  The boeleo W1 may be the device that helps to usher in an era of understanding and peace.

The boeleo AI translator arrived in a clean 3 3/4 inches wide by 7 1/8 inches tall by 1 3/8 inches thick flat white retail package.  Save for the silver “boeleo AI TRANSLATOR” title etched into the center of the cover, the top/bottom and cover were devoid of writing.  If you look toward your right, the left panel displayed “Translate by heart Intelligent Travel,” and the opposing face had a QR code along the bottom edge.   The rear panel provided a brief glimpse into the boeleo model 1 device and listed the package contents: Translator device, Type-C charging cable, earphone switch cable.  Additionally, you will find their website address, mailing address, manufacturing location and a series of SKU codes.  The outer slipcover was easily removed, revealing a plain off-white cardboard box.  I removed the lid and found a 2 1/4 inches wide by 5 1/16 inches tall by 1/2 inch thick silver-grey device.  The lower 1 7/8 inches section contained the speaker, which was detailed with a geometric floral design.  The upper section measured 1 3/4 inches wide by 2 5/16 inches tall and contained a touch-capacitive panel, with an overlying sticker.  Upon the sticker, the company wrote: “Let the World Enjoy the Fun of Intelligence.”  When I examined the back of the device, I was pleased to find a labeled sticker, which detailed the power button, Record A and Record B buttons toward your left, the upper microphone, the camera, the volume up and down buttons toward your right, the SIM card port and the USB-C port and  lower microphones.  The device felt comfortable in hand and reminded me of a mix between an iPod Touch and iPod Classic.

In addition to the translator, the box contained a twelve-page instruction manual, a SIM card pin (No SIM card), a 40 inches long USB-A to USB-C cable and a 4-inches long USB-C to 3.5mm dongle.  Before turning on the device, I perused the clean, semi-well-worded instruction manual.  The first panel provided a pictorial product list, while panels two and three provided picturesque labeled images of the front, back, sides, top, and bottom of the device.  Similar to the posterior label sticker, the diagram was quite useful.  There were two microphones across the top instead of the single label behind the device. Additionally, the diagram detailed a home button on the front of the device. There were some obvious language errors, phrasing issues, and missing prepositions, but nothing serious enough to destroy the intended meaning.  To charge the 2080mAh battery, I plugged the included USB-A cable into a wall charger and then the USB-C end into the device.  To power on the device, I long pressed the left-sided power button for a few seconds.  During the twenty-second startup-process, a blocky boeleo logo appeared on the screen.  The font was a little uncanny, but I was impressed with both the color quality and the brightness.  Once the product initialized, a bright white screen with a list of country names was presented to me.  I was instructed to choose a language and then to set up the WiFi network.  Unfortunately, this step was not as simple as the preceding steps.  I attempted to connect to the Renaissance Hotel Patriots Place, Boston but was unable to use the hotel’s internet.  I was able to link to the hotel WiFi with my iPhone XS Max after entering my room number and last name.  With the boeleo translator, I was able to see the Guest WiFI, but I was unable to access the room/name entry point.  Although frustrating, it was not unexpected.  Thus, I decided to activate my Mobile HotSpot on my iPhone XS Max. I navigated to settings and then activated my Mobile Hotspot.  The network became available on the boeleo device and was easily joined when I added the code from my phone.  Once connected, I experienced no further issues with the device; it worked perfectly and exceeded my expectations. 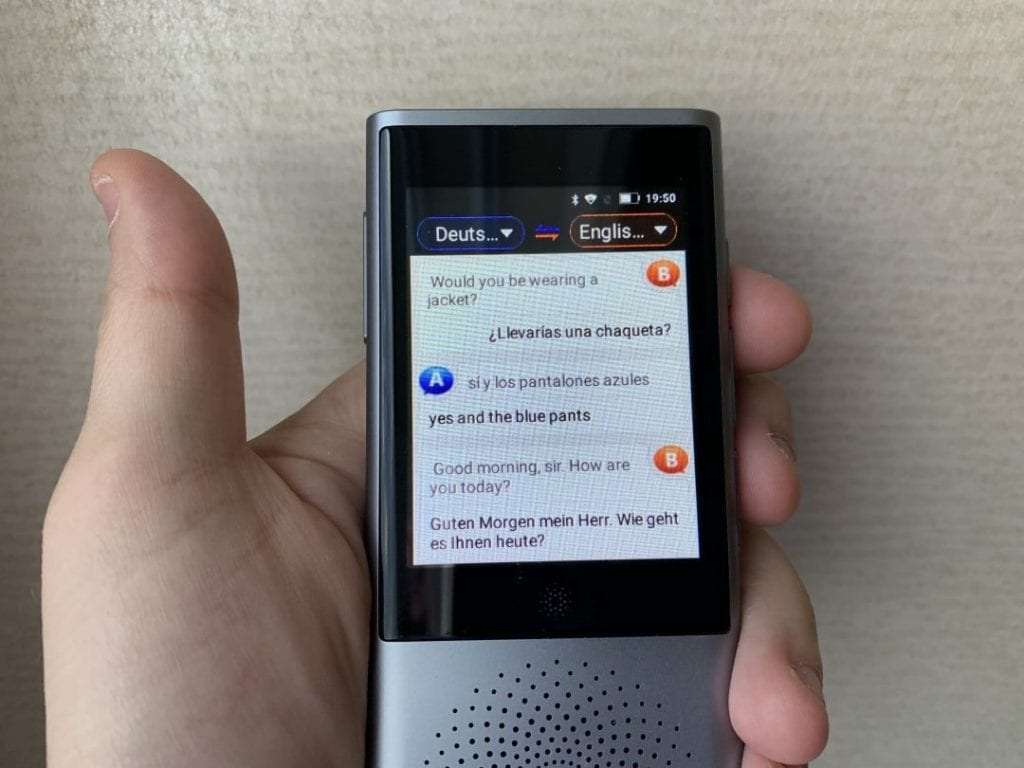 When the screen illuminated, I noticed nine apps/icons: Translate, PhotoTranslate, Recording, Conference, Mobile Hotspot, WiFi, Bluetooth Earphone, Settings, language.  The capacitive touch screen proved to be just the right size and was fully accessible to my thumb when held in my hand.  The major downside to this device is that you must be connected to a network for the translator to work.  If you tap “Translate,” the device will take you to the translation window.  If you are not connected to a network, the screen will read “Please prioritize networking.”  When I pressed the side “A” or “B” record buttons, the device alerted me to “Network connection failed: Chinese-English is Available.”  Essentially the code for just that language combination was saved offline.  Along the top of the screen, I was pleased to find blue and red language selection bubbles. When I tapped one of the bubbles, a list of flags/Country names was available: Chinese, English (US), English (UK), Japanese, French, German, Arabic (Egypt), Spanish (Spain), Spanish (Mexico), Russian, English (Australia), English (Canada), Korean, Hindi, Vietnamese, French (Canadian), Portuguese (Brazil), Catalan, Indonesian, Thai, Portuguese, Hebrew, Polish, English (Ireland), Italian, Cantonese, Swedish, Bulgarian, Hungarian, Croatian, Malay, English (India), Finnish, Slovak, Taiwanese, Turkish, Danish, Romanian, Dutch, Greek, Slovenian, Tamil (India), Arabic, Czech, Norwegian.  When you find your language, you can repeat the process with a second language.  Similar to a walkie-talkie, you will need to hold the button down to talk and to release it to hear the translated speech.  If you look closely at the side of this device, you will notice two color-coded record buttons.   These. Buttons corresponded to the languages that you selected within the App. 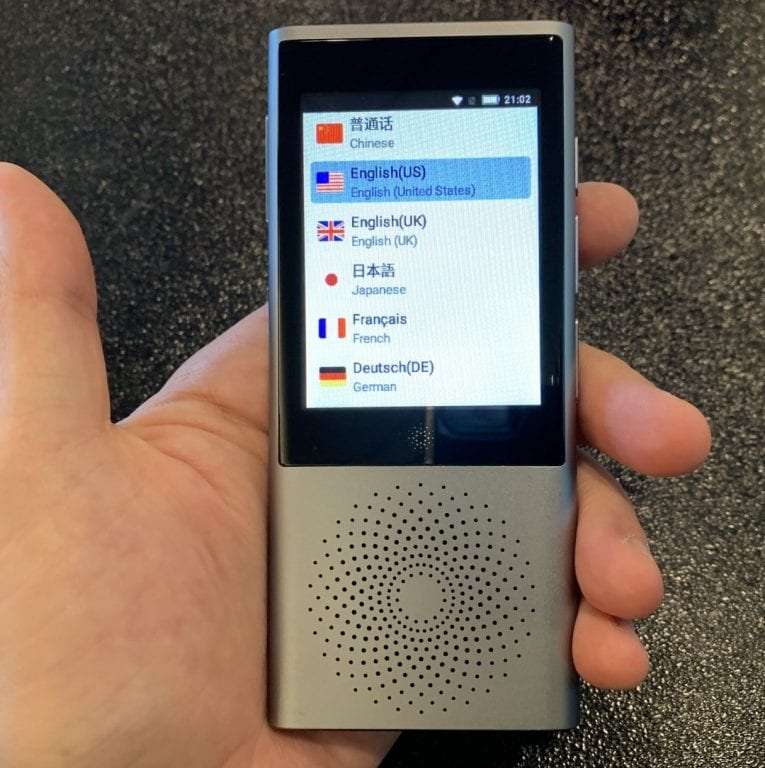 If you are person A (Blue), hold the top button, state your business, and then release the button.  The translated speech will then appear on the screen, and a female voice will speak the words.  The top section showed a large blue-colored “A” and then presented your vocalized words.  Beneath this, I was pleased to find the translated speech.  When I answered back, I held the lower red button (B) and talked into the device.  When finished, I released the button and was pleased to see my spoken words next to the letter “B.”    Beneath this, I was able to see the translated speech.  The conversation list remained available to review, and you could change the languages at your whim.  The previous speech did not change based on the language, but any words uttered after you changed the language would change to the newly chosen language.  I started with Spanish to English and then changed it to have my words translated into German.  I looked up a few phrases in German and stated them back into the machine to see how they translated.  This system would be an amazing asset to somebody working on language phonetics.  Imagine having a device like this in your foreign language class, to hear how to pronounce words and phrases and then to see if your pronunciations were reasonable.  Next, I changed the language to English-Chinese and thanks to cartoons, knew how to say hello.  I vocalized this, was able to see the character language on the screen and was pleased that the English turned out okay.  Additionally, I know a few words in Russian and I was able to say Goodbye. Lastly, I changed the language to Spanish-Russian and spoke Spanish phrases into the device and noted a quick translation into Russian. 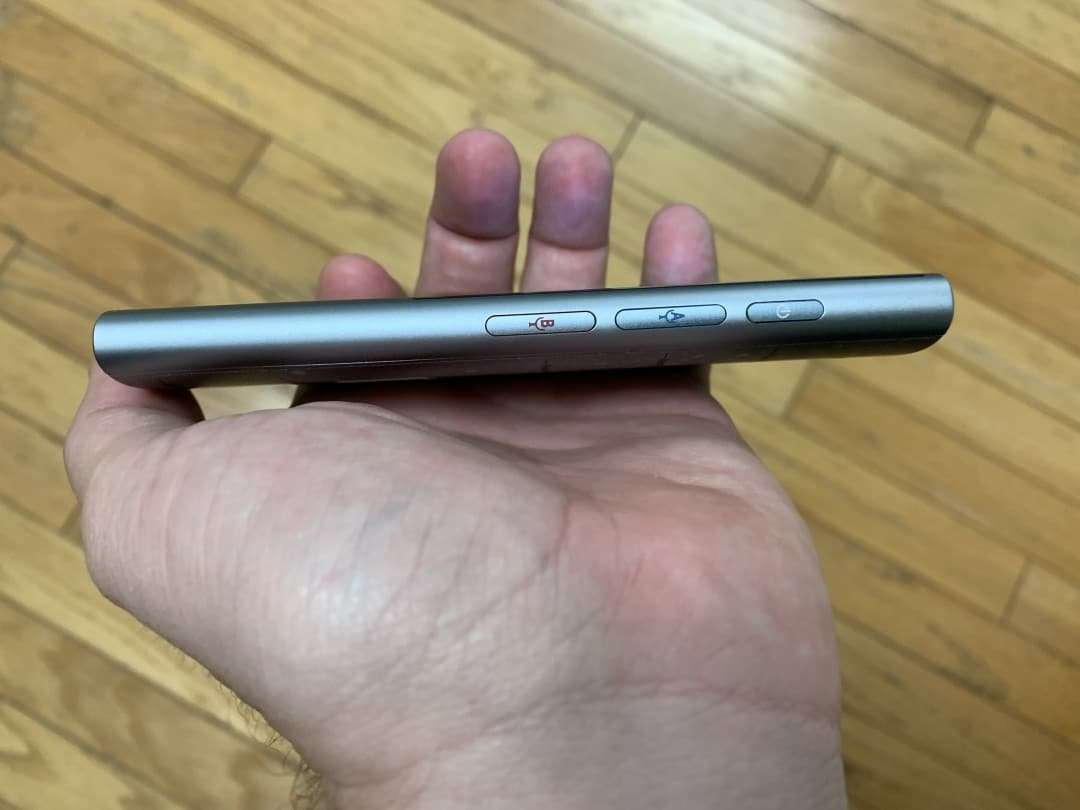 The translations returned quickly and appeared to be accurate/comparable to Google Translate.  I was able to look up “How do you say in…” phrases, had Siri vocalize them, and then checked the translation using this device.  Again, I was taken aback at how quickly this device worked.  I would love to be able to download other language combinations to offline storage.  That would allow me to utilize the device in regions with less-than-ideal networks.  Rarely would I have to change the languages multiple times for any given trip.  From the home screen, you can tap settings and storage.  The device shipped with 7.13 GB of storage space and utilized 3.54 GB of that space.  It appeared that I could store at least another language within the device.  An expandable memory would allow dozens of languages to be stored off-line.  I liked that the home button provided an iPod Touch/iPhone-esque experience.  The home button was easily located and provided front-and-center utility, just beneath the touchscreen.  Even though this feature was removed from the modern generation of iPhones, many of us still grew up with this feature.  Press the button and return to the home screen.  From there, you can access the online-only PhotoTranslate, Recording and conference options.  If you have included a Nano-SIM, you could use this device as a hotspot.  You can also choose WiFI and adjust your network, connect a Bluetooth headphone or change the main language of the device.  Lastly, you can select settings.  From within settings, you can adjust WiFi, Mode (Automatic vs. Operation), change display brightness, change date and time, reset the device, upgrade the firmware, evaluate the storage and see the IMEI, SN, version, and model in the “About Us” tab.  I was impressed that the boeleo translator was capable of both LTE and WiFi connection.  Even though the device did not ship with a nano-SIM, it did come with the push pin to add one at a later time.

When I initially tested the device, I thought that the Google Translate App, on my iPhone, would work just as well as the device and that the hardware was going to be unnecessary.  I can honestly state that I was wrong.  The stand-alone device allowed me to use my phone for search functions, while simultaneously using the translator.  Second, the boeleo device felt much faster than Google Translate on my iPhone XS Max.  Beyond the ability to speak/record and translate, you can use the 8MP rear camera to snap photos of signs, of food labels, etc.  Take this device with you on your next mission trip or on your next backpacking tour to create a more immersive experience.  I did not test the conference mode, but the device promises the ability to allow larger groups to communicate as well.
You can find it at TomTop and Gearbest