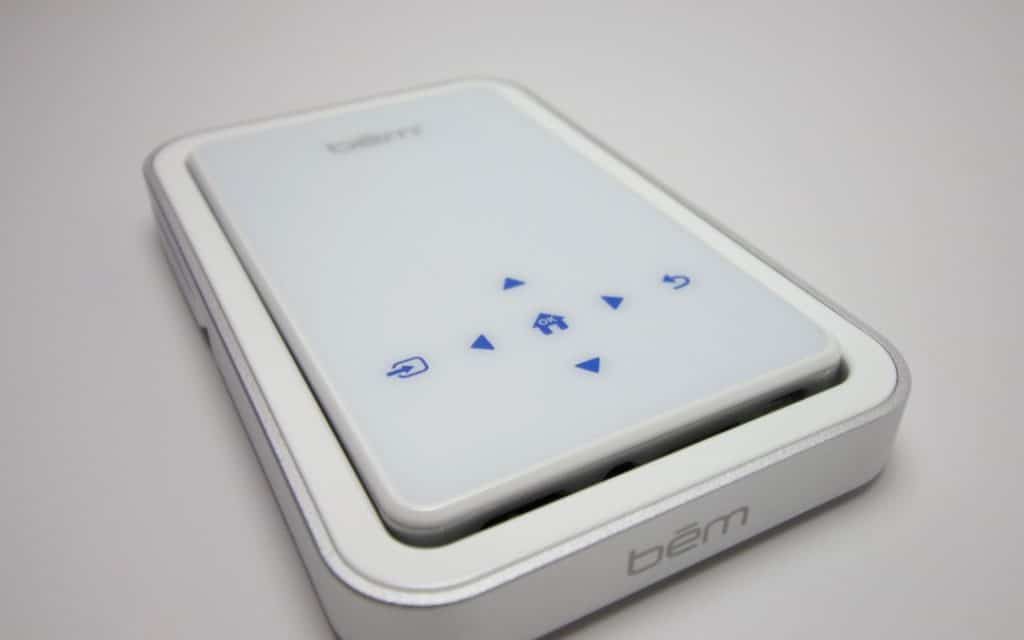 I’m the type of person that likes to experience videos I watch. I want them to be larger than life. When I go to the movies, I go to biggest, best theater possible. When I pick out a TV for my living room, it’s the largest one that will fit in the room. My love of large video experiences led me to look for a projector that would not only provide me with exceptional video quality but also one that wouldn’t require its own surface for long-term storage. This search led me to the Bēm Kickstand MICRO Projector.

Bēm Wireless makes a creative projector that’s super tiny. It stands up with a built-in kickstand and can give you a vivid HD picture the size of your wall. The projector is small enough to fit into a pocket and it’s convenient to use in any circumstance. The Kickstand MICRO Projector comes boxed with a power adapter, HDMI cable, a Quick Start Guide, and a User Guide. The projector has brightness up to 400 ANSI lumens and will display a graphics resolution of 1280 x 800 WXGA. The device has a soft-touch finish with an aluminum outer band that acts as a lens cap when the projector is not in use. 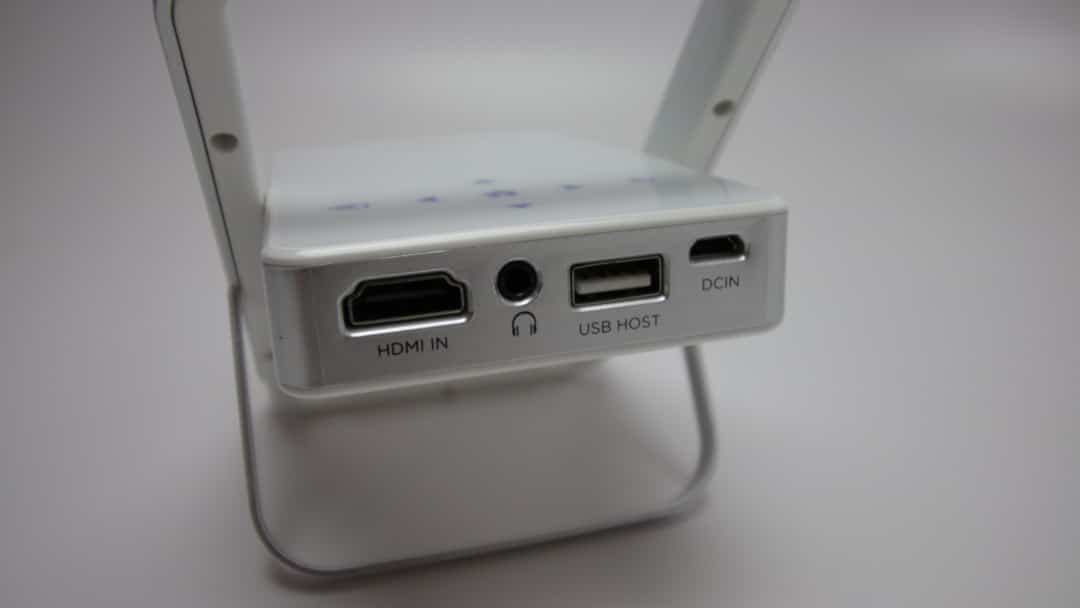 Set-up up is very easy. After your projector is charged or connected to the power adapter, you simply kick out the leg and position it how it will work best on your wall or screen. You have a few options for connection with the projector. First, you can connect a device to the HDMI input port. This is best used with laptops, Bluray players, or gaming systems like the XBox. Second, there is a USB-A port included for use with USB thumb drives. Lastly, you can connect to the projector using a wireless connection from a mobile device.

With the mobile connection, you connect to the projector as if it were your WiFi network. While this gives you a wireless connection, it also prevents you from being connected to a true WiFi network for internet connectivity. That said, you have to make sure that whatever video you want to watch is downloaded to your device rather than trying to stream it from an Internet source like YouTube or Netflix. I do want to point out here that I was able to watch Netflix content that I downloaded for viewing offline, but I couldn’t watch videos in my iTunes library because it were purchased from iTunes and therefore ‘protected’ content. I did notice that if I didn’t use the mobile device right away that the connection between the phone and projector would have to be renewed by walking through the set-up process again. 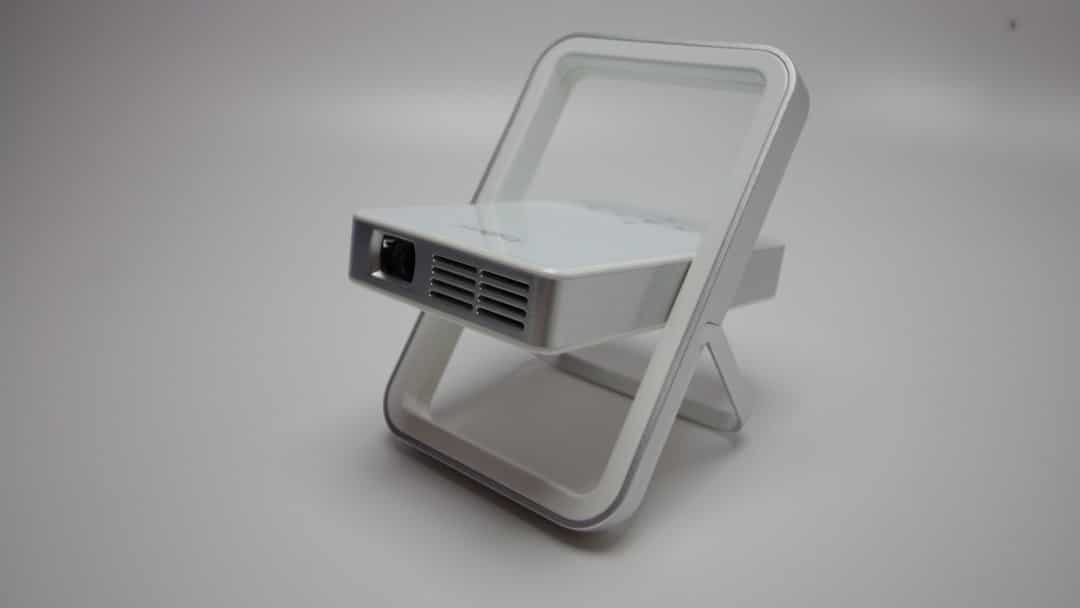 It’s actually pretty unique that the Kickstand MICRO will allow you to stream video wirelessly from your smartphone. I’ve tested out other ‘small’ projectors and while some will claim to allow the streaming video option, they just don’t execute it very well. The amazing thing about the Bēm Wireless projector is that you can use the smartphone’s native streaming option like AirPlay to send a signal to the projector. When I’ve had experiences like this before, I’ve had to use an app to complete the streaming feature.

I did notice a little bit of a lag occasionally. I’m still not sure what the cause was, but at times, I found that the audio and video would slip out of sync. It wasn’t enough to make me dislike the device but was a bit of an annoyance a couple of times it happened. The only other issue I had was audio level. The sound quality was ok, but the built-in speaker on the projector didn’t push out a lot of volumes. Fortunately, Bēm Wireless did include an aux port for you to be able to hook up speakers or even use headphones along with the projector. You can also connect to external speakers via Bluetooth, but sometimes the sync between the audio and video gets even worse. 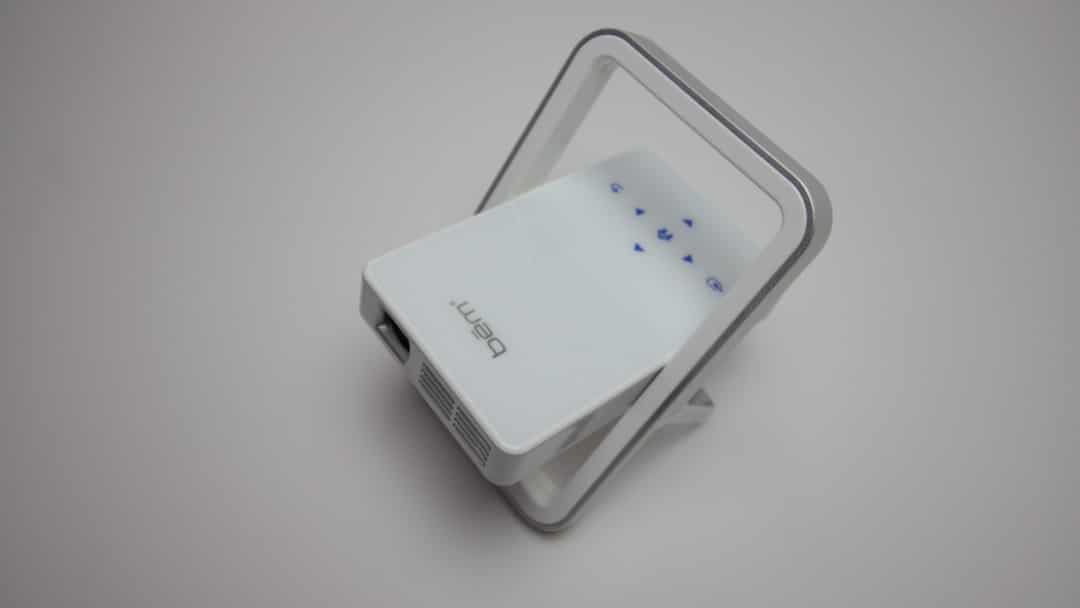 I’ve been very impressed with this tiny projector. It’s ideal for those larger than life entertainment experiences. Because of its ease of use and portability, the Kickstand MICRO would be great for business people, too. Within 5 minutes you could have this setup and be showing a presentation anywhere to any amount of people. I’d love to see the audio be improved on the projector itself so that you can have a more wireless experience, but that’s really a minor point of contention. The Kickstand MICRO is a great device and I can recommend it to anyone who wants a great portable projector.
BUY FROM AMAZON