The past few days have been different for sure. I am an iphone owner, and for the past three weeks, I have not been able to use my iphone here at my house, and in some spots thru out my town. With three burned out pixels on the screen of my iphone, I new I would have to get it replaced. So I just dealt with not being able to make or receive calls. So I took the time to drive two and a half hours to Louisville,KY because it’s the closest Apple store to me. With the exchange of my iphone complete,  I was assuming that when I got home I would have some sort of signal. Boy was I wrong! Turns out that it was not the iphone at all, well sort of. At&t had been working on converting the towers in my area from Edge to 3G, and because of that I was getting a very week signal. Now this is where the fun comes in to play. I called At&t to ask why I was not able to receive any service at my house.

The first At&t Rep I spoke with told me it’s not there towers call Apple, so I called Apple and was informed that if At&t said it’s not there towers and it can’t be the iphone, because I just had it replaced then it could be a problem with the sim card, then I was told to drive to At&t store and pick one up to try.

After a non bit of help I drove my self to At&t to pick up a sim card, the guy I had to deal with ether was new or a tad bit retarded because he had no clue what the hell I was saying. It was like I was talking a new language to him after five minutes of this crap he finally gives me the sim card. Honestly I think he was trying to find away to get credit for giving me the sim card, even known that Apple sent me there to pick it up. That particular store is very bad about trying to get credit for them selfs its quite a sad place to visit.

Next on our fun path when I got home I had to start the whole iphone to itunes crap to activate my new sim card to my phone, that was such a great time. Next calling apple to make sure if I do so I will not be signed back up for a new 2 year contract. Redoing the itunes setup it tells you that you will be entered into a new two year contract.

I spoke with Jim who was extremely helpful and was able to help me bypass the hole itunes process, which came to a shock to even me that he could activate my iphone and bypass the whole itunes setup all together. After Jim got me back up and running with my iphone I still had no service in and making or receiving calls or text. it was just not going to happen. Jim from Apple called At&t so while talking with Jim and a Rep from At&t I got some better trouble shooting. I am guessing its just because I had Jim from Apple on the phone, if he would not have been on the line the Rep from At&t probably would have told me just to call Apple again.

Next after a one hour three way call between Apple At&t and my self, we had finely came to get the answer from the Rep with at&t. “We are working on our towers and that could take up to 60 days to complete we are switching from Edge to 3G”. WTF are you kidding me I had to deal with all this bull shit because you guys can’t just come out and say in the first call I make to you, that the towers are being worked on. So what’s the next step for me then sir, I need to have service and it’s not my fault I am not getting that. Then the Apple Rep stepped up to say the iphone has a weaker internal cellular antenna then most phones.

So basically I asked what you’re telling me at&t is working on there towers which sends out a weaker signal and the iphone in all its glory can’t keep up with some of the lower brand models because Apple did not really work as hard as they should to make it a great talking experience. Thats some of the dumbest shit ever. I was then told something new I did not know if you’re an iphone owner you are always eligible for an upgrade meaning you can switch to a new phone at any time allowing you to get the discounted price. And thats the advice I was given from both Reps from Apple and at&t.

The next day I drove around to find an at&t store open on sundays, thats sort of a hard task after wasting my gas driving I decided ill try best buy. Before we go any farther if you know me then you know that I HATE Best buy with a passion. I thought to my self well it’s the cell phone department how bad could they fuck things up right?  I mean I have had my phones upgraded at Walmart before, Best buy can’t mess this one up. Boy was I wrong!don’t get me wrong the girl I dealt with was a very nice and tried to help me but honestly if you’re not a corporate store then you don’t need to mess with peoples cell phones. She upgraded my plain and somehow told me I would be charged 300 dollars next month I was like thinking thats not right, so she got that fixed and still could not get the new phone activated. Turns out after sitting there four hours from 12:30 to 4:30 they finally tell me oh you have an iphone were not a corporate store we cant change anything. So what the hell does that mean, you guys have already done the Upgrade, well sir we cant get the phone to work or give you a new sim card to revert what we have done to fix your service with your iphone. Meaning that I have to return the blackberry I had just bought from them and call at&t from home to have at&t fix the mess they just made.

The next day it starts over, I got up and called at&t then went straight to at&t to pick up a new sim card. I took my laptop with me got the card and in the store called Jim from apple and did the whole activate my iphone without itunes again.

After all that I am back at home waiting for a call from the last Rep I spoke with before leaving to get the sim card. After waiting for 2 hours past the time she was going to call back, I called at&t and spoke with someone else who transferred me again to someone in a special department. I am guessing they are the team that tries to keep people from switching to different cell phone providers.

She was very helpful and even known I still could not get service she came up with a great way to be able to.  Nokia and Blackberry have such a strong internal antenna she said that it was possible to give me a 250.00 dollar credit to my account and then use that credit towards a Blackberry curve. The next step was for me to decide if thats what I wanted to do. The credit applied to my account so the phone was 199.99 and with a 250.00 credit I was able to still have 30 dollars applied to my bill and then they give me a 10 dollar recurring credit to off set the difference between the iphone plain and the blackberry plain allowing me not to have a bigger bill each month that was a big plus.

They even noted some extra fun things to my account for me: Like if I am charged text messaging fees for using AIM YAHOO or MSN that they will refund the fees because it’s such a gray spot. Also with in 30 days if I would like to switch out the phone I can do so at any corporate store.

All in all I think after dealing with all the garbage that happened over the three day span it was well worth it. At&t made up for all the hassle by sending me a phone that gets a better signal in my house while the towers are being worked on. They credited my account and gave me a credit that will show up each month to off set the bill. I think I would have to say that so far I guess Im pleased I still have to receive the phone and because they expressed the shipping at no extra charge I should be getting it tomorrow. So as long as I can connect the new Blackberry to my Apple and get everything to work right I should be back in action soon. 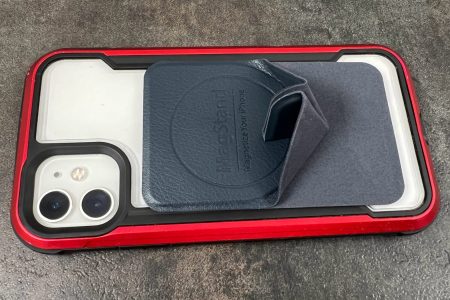