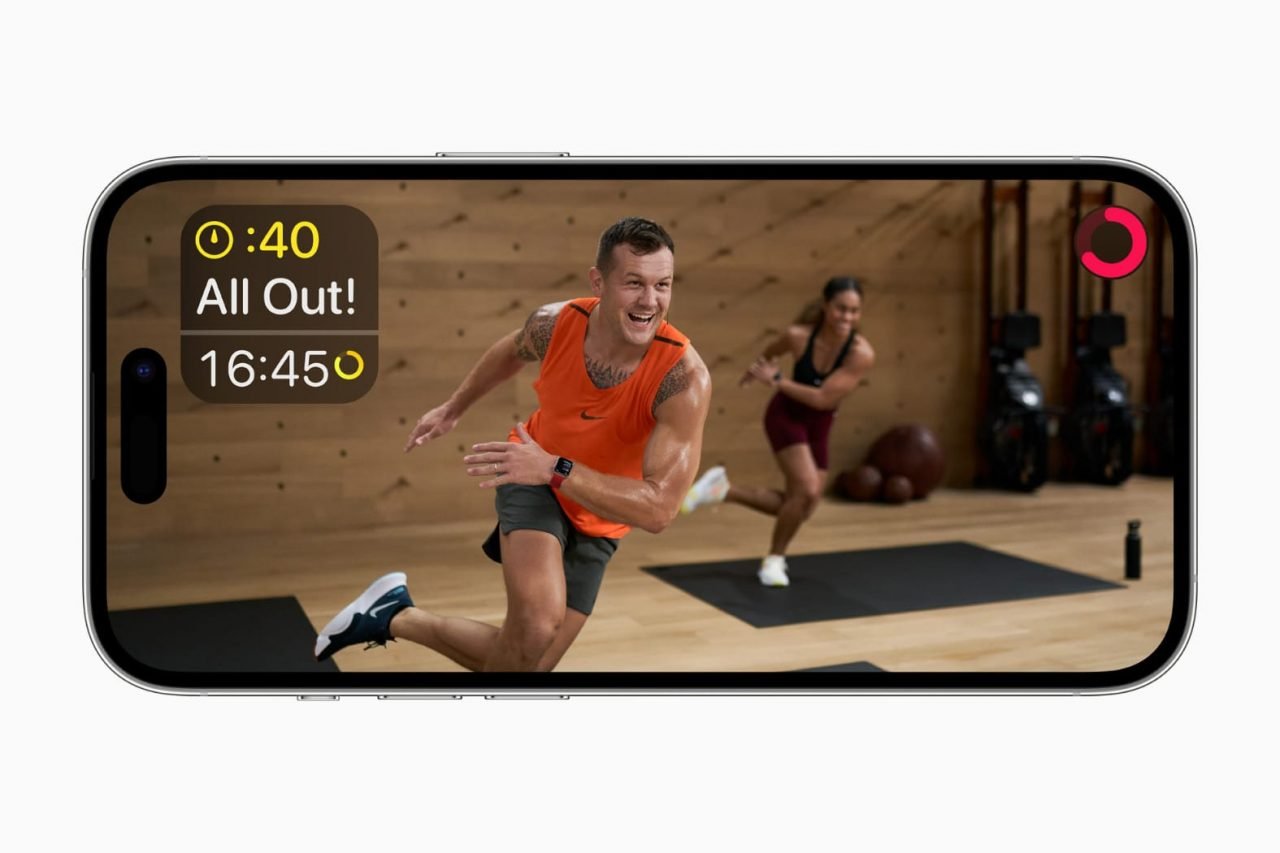 Starting September 12, Fitness+ will also introduce new seasons of Time to Walk and Time to Run; the latest Artist Spotlight series featuring music from Mary J. Blige, The Rolling Stones, and The Weeknd; and a new Yoga trainer

Apple today announced that Apple Fitness+, the award-winning fitness and wellness service designed to be welcoming to all, will be available for all iPhone users to subscribe to and enjoy, even if they don’t have an Apple Watch. The update will be available later this fall in all 21 countries where the service is offered. On Monday, September 12, Fitness+ will introduce the fourth season of Time to Walk featuring new guests, including award-winning actor Regina Hall, Latin Grammy winner Nicky Jam, and Emmy Award-winning performer Leslie Jordan. Time to Run will kick off its second season exploring new locations such as Yellowstone National Park in Wyoming, Mexico City, and Queenstown, New Zealand. That same day, Fitness+ will also launch the latest Artist Spotlight series with workouts featuring the music of Mary J. Blige, The Rolling Stones, and The Weeknd. Additionally, Fitness+ will debut its newest Collection, Pilates for More Than Your Core, and expand its team of world-class trainers by introducing a new Yoga trainer, Dice Iida-Klein.

“Since launching just under two years ago, we have heard incredible feedback from users on what a difference Fitness+ is making in their lives. We are thrilled to bring the award-winning service to even more people by making Fitness+ available to all iPhone users later this fall, even if they don’t have an Apple Watch,” said Jay Blahnik, Apple’s vice president of Fitness Technologies. “We can’t wait for more people around the world to stay motivated toward their fitness and wellness goals, and live a healthier day.”

Fitness+ for All iPhone Users

Later this fall, for the first time ever, Fitness+ will be available for all iPhone users to subscribe to and enjoy in the 21 countries it is offered in, even if they don’t have an Apple Watch. iPhone users will have access to the entire service featuring over 3,000 studio-style workouts and meditations, all led by a diverse and inclusive team of trainers. Fitness+ users will see onscreen trainer guidance and interval timing, and estimated calories burned will be used to make progress on their Move ring. Fitness+ will be fully integrated with the Fitness app coming with iOS 16 and located in the middle tab, where users can stay motivated to close their Move ring through awards, activity sharing, and more. Users only need an iPhone to sign up, and can then experience Fitness+ on iPhone, iPad, and Apple TV.

Fitness+ users with an Apple Watch can continue to take their motivation to the next level with personalized real-time metrics that display on iPhone, iPad, and Apple TV, as well as the ability to experience Time to Walk, Time to Run, and meditations with just their Apple Watch paired with AirPods or other Bluetooth-enabled headphones.

Time to Walk and Time to Run

Throughout the fall, Fitness+ will introduce new episodes of Time to Walk, an inspiring audio experience on Apple Watch designed to help people walk more often, featuring some of the world’s most interesting and influential people who share stories, photos, and music with Fitness+ users. Time to Walk has featured 58 guests to date, including Prince William, Malala Yousafzai, Christopher Meloni, Draymond Green, Camila Cabello, Nick Jonas, and many others.

As the series kicks off its fourth season, new guests will be added each week, beginning with:

Additionally, Time to Run, an audio running experience designed to help users add inspiration to their everyday run, will add new episodes featuring popular running routes in some of the world’s most iconic locations. Each Time to Run episode is led by a Fitness+ trainer and composed of inspiring coaching tips, motivating and energizing music playlists curated by the trainers, and photos of notable sights along the route taken by the Fitness+ trainer. Runners of all levels can enjoy Time to Run anytime, anywhere, and stay motivated on their route from start to finish.

As the series kicks off its second season, new locations will be added each week, beginning with Yellowstone National Park in Wyoming; Mexico City; Anchorage, Alaska; Monterey, California; Seattle; and Queenstown, New Zealand.

Starting Monday, September 12, Fitness+ will add to the popular Artist Spotlight series with new workouts featuring the music of Mary J. Blige, The Rolling Stones, and The Weeknd. The series dedicates an entire workout playlist to a single artist, and every Monday for four weeks, new workouts featuring music by each of these artists will appear across different workout types, including Strength, HIIT, Dance, Cycling, Yoga, and Treadmill. Previous Artist Spotlight workouts have featured music by BTS, the Beatles, Elton John, Katy Perry, Keith Urban, Prince, Shakira, and more.

Inspired by these Fitness+ workouts, Apple Music and Apple One subscribers can enjoy the Fitness+ Spotlight series, which features a unique music playlist for each individual Artist Spotlight musician to keep people energized outside of their Fitness+ workouts.

The same day, Fitness+ will also introduce its newest Collection, Pilates for More Than Your Core, featuring a curation of 20- and 30-minute Pilates workouts designed to strengthen the entire body using just a resistance band. Users can do these workouts on their own or as a complement to Strength and Core workouts. Other available Collections in the service include Train to Row a Fast 2000 Meters, Run Your First 5K, Get into a Groove with Dance, Resilience for Life’s Ups and Downs, and more.

Yoga — one of the most popular Fitness+ workouts — can help users feel strong, stretched, and centered. Dice Iida-Klein is the newest addition to the Fitness+ trainer team and has 15 years of experience teaching yoga around the world, including in Australia, the Netherlands, and Thailand. He is passionate about helping people become more aware of their mind-body connection, and his music choices encourage users to embrace this.

Fitness+ Enhancements in watchOS 9 and iOS 16

Apple Fitness+ is an award-winning fitness and wellness service with studio-style workouts and meditations designed to be welcoming to all, wherever they are in their journey, and to help users live a healthier day. Subscribers have access to the largest library of workout content in 4K Ultra High Definition, all led by a diverse and inclusive team of trainers. Fitness+ also has workout programs with custom content designed to help users through a season of life or prepare for important moments, an Artist Spotlight series with entire playlists by world-renowned music artists, and Collections, which include curated content from the Fitness+ library to help users go after their goals or find inspiration. Fitness+ helps users train their body and mind with a one-of-a-kind engaging experience that can be done anytime, anywhere and motivates users from start to finish with music from today’s top artists. Later this fall, Fitness+ will be available for all iPhone users to subscribe to and enjoy in the 21 countries it is available in, and those with an Apple Watch can continue to take their experience to the next level with personalized real-time metrics that display on iPhone, iPad, and Apple TV. With Fitness+, users can also get moving with inspiring audio experiences, including Time to Walk, featuring some of the world’s most interesting and influential people, and Time to Run, designed to help users become more consistent and better runners. Apple Fitness+ is available in English with subtitles in Brazilian Portuguese, English, French, German, Italian, Russian, and Spanish. More information is available at apple.com/apple-fitness-plus.

Apple revolutionized personal technology with the introduction of the Macintosh in 1984. Today, Apple leads the world in innovation with iPhone, iPad, Mac, Apple Watch, and Apple TV. Apple’s five software platforms — iOS, iPadOS, macOS, watchOS, and tvOS — provide seamless experiences across all Apple devices and empower people with breakthrough services including the App Store, Apple Music, Apple Pay, and iCloud. Apple’s more than 100,000 employees are dedicated to making the best products on earth, and to leaving the world better than we found it.